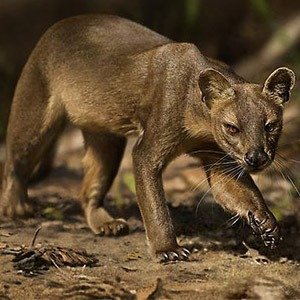 Although it is related to the mongoose, the feline-looking fossa (Cryptoprocta ferox) has some characteristics in common with cats, such as retractable claws. Their body length, including tail, can be up to 1.7 metres (5’6”) long, and they weigh about 12kg (26lb). They are the largest carnivorous mammal on Madagascar, and are highly adapted to climbing amongst trees. They are cathemeral (active during both night and day) and although they live a predominantly solitary life, males have been observed hunting cooperatively together. Perhaps the most interesting thing about the fossa is its extraordinary genitalia; the males have a long, spiny penis and the females, like hyenas, have a pseudo-penis which, unlike hyenas, decreases in size as the animal ages. Their conservation status is considered Vulnerable. 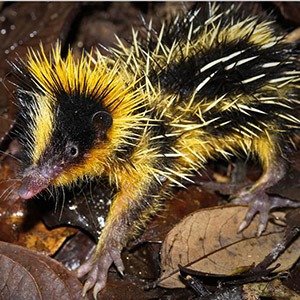 Also hailing from Madagascar is the Lowland Streaked Tenrec (Hemicentetes semispinosus), which has striking yellow and black fur with sparsely scattered quills. Found in lowland rainforest, this elusive tenrec measures less than 20 cm in length and has an extended snout ideal for its insectivorous diet. It uses its quills to communicate in two different ways, by raising them in agitation or by rubbing them together in a method known as stridulation – best known as the type noise produced by crickets and cicadas. The sound produced is too high to be perceived by human ears. Their conservation status  is considered to be of Least Concern. 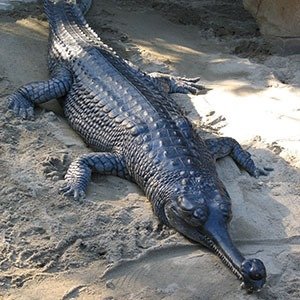 The gharial (Gavialis gangeticus) is a fish-eating crocodile native to the Indian Subcontinent. They are large, getting up to over 6 metres (20ft) in length, and have 110 teeth. The males have a hollow protuberance on the ends of their snouts which allow them to modify sounds like hissing, which can then be heard up to a kilometer away. The purpose of this noise is assumed to be for reproductive reasons. Their snouts become shorter and thicker as they age. Although notably clumsy on land, they are very agile in the calmer areas of fast-moving rivers where they live. Males will hold a territory containing several females. Sadly, their global population numbers less than a 1,000. They are listed as Critically Endangered. 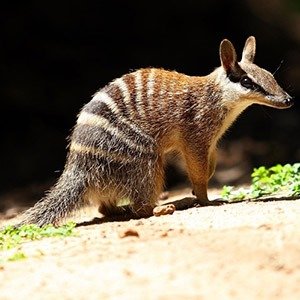 Australians will probably already know this one, but here’s the numbat (Myrmecobius fasciatus), a striped termite-eating marsupial once abundant throughout southern Australia, but its habitat was encroached upon and it was devastated by feral species until it was only found in a small area of Western Australia. After the introduction of the fox to Australia, the population plummeted to less than 1,000 individuals. It has since, however, successfully been reintroduced to South Australia and New South Wales, which bodes well for its future. Its diet consists primarily of ants and termites. Because it lacks heavy digging claws, it must be diurnal (active during the day) in order to get at the termites, which are also active during the day. It has an extra tooth unique amongst terrestrial mammals, and its mouth is perfectly designed to accommodate its diet, rendering a more powerful body unnecessary. It is classed as Endangered. 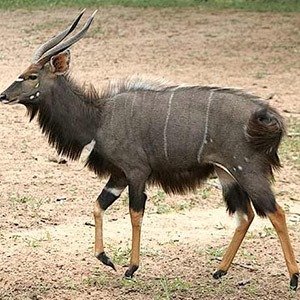 The nyala (Tragelaphus angasii) is a majestic spiral-horned antelope native to south-eastern Africa. Its feet are hairy and covered in glands which release its scent wherever it treads. It is sexually dimorphic, with females lacking horns entirely. They travel in herds of up to 30 members, with the males generally remaining alone. They will alert each other to danger by barking like dogs. They prefer to inhabit lush grasslands with close access to water, and will only feed at night during the wet season. Although human development has encroached upon their habitat, their population is currently stable at around 30,000 individuals. Their conservation status is considered to be of Least Concern. 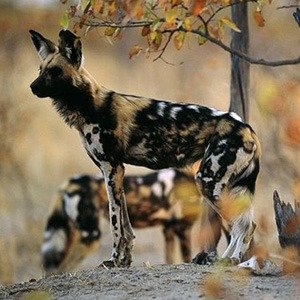 Although it’s another canid, I couldn’t help but include my personal favourite, the African wild dog (Lycaon pictus), natural predator of the nyala. The Latin name literally means “painted wolf”, in reference to its beautiful patchwork coat. Unlike other members of the canidae, it only has four toes on its feet, and is, once again, the only extant species in its genus. They are highly intelligent and social animals, living in packs of up to 27. Due to their extreme success in pack organization, they are the most successful hunter of any of the large terrestrial carnivores. Spotted hyenas will often follow packs of African wild dogs in order to scavenge from their kills. Males remain with the natal pack, while females disperse, which is unusual for social animals. Aggression within the pack is rare, and there is little competition for the alpha position. Breeding is limited to the dominant female, who can have up to 16 pups in a littler. They are classified as Endangered. 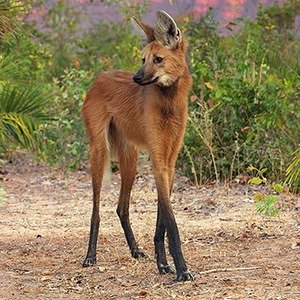 The maned wolf (Chrysocyon brachyurus) is the largest canid to roam the grasslands of South America. They are the only species in their genus, and, despite their name and appearance, are neither foxes nor true wolves. They weigh in at about 23kg and stand approximately 90cm tall, making it the tallest canid. While usually solitary, males and females will co-defend a territory together, although they only rarely meet outside of mating season. It has a symbiotic relationship with leafcutter ants, which use the maned wolf’s excrement to fertilise their fungus gardens. Its urine, which it uses to communicate, smells a lot like marijuana, and once caused police to investigate Rotterdam Zoo for pot-smokers. Their conservation status is listed as Near Threatened. 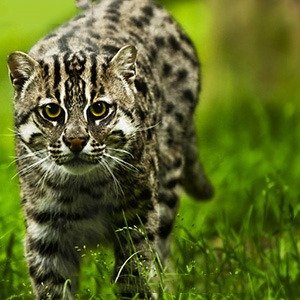 The fishing cat (Prionailurus viverrinus) is a medium sized feline native to the wetlands of South and South-East Asia. It is approximately double the size of a typical house cat, and is a highly adapted swimmer, able to travel long distances beneath the water. Its paws are webbed, and its diet consists primarily of fish, as you might imagine, although they are capable of taking larger terrestrial prey. Their fur is so dense that it is waterproof, keeping the cat warm in the cold rivers it fishes in. They are thought to be nocturnal, however little is known is about the fishing cat’s behaviour in the wild. Habitat destruction and poaching are contributing to their depopulation in the wild. They are classified as Endangered. 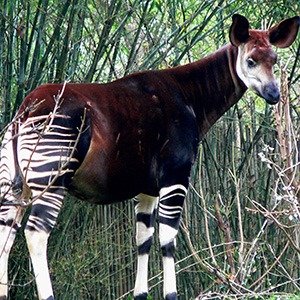 The okapi (Okapia johnstoni) are the only extant relative of the giraffe and, like the giraffe, has a long, purplish prehensile tongue, which it uses to strip leaves from plants as it wanders Congolese jungles. Their fur is oily and repels water, and their ears are designed to pick up on the subtle sounds of its primary natural predator, the leopard. It remained unknown to western science until the 20th Century, and to this day, not all is fully understood about it, such as the evolutionary purpose of its stripes. It was traditionally thought to be diurnal, but recent evidence has contradicted this theory, showing video footage of okapis feeding at night. About 10,000 okapis are thought to remain in the wild. They are classified as Endangered. 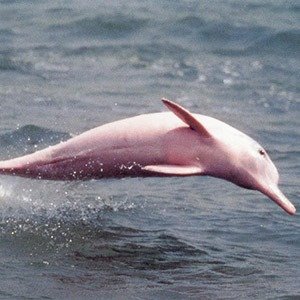 The Amazon River dolphin (Inia geoffrensis) is the largest freshwater cetacean. It grows up to over 2 meters (6.6ft) long, with the females being larger than males. They have specialized flexible necks which enable them to navigate flooded forests. They have a mating ritual in which the males will carry various objects in their mouths in an attempt to impress the females. There are actually five species of river dolphins, but the pink one is the most intelligent out of all of them. Their brain capacity is 40% larger than a human’s. Despite being in freshwater, they share a fate similar to that of their ocean-going counterparts, in that sound pollution produced by boats is having a negative impact on their navigation. Nobody knows why they’re pink, however they have been observed getting pinker (i.e., blushing) when excited. They have been most recently classified by the IUCN as Endangered.