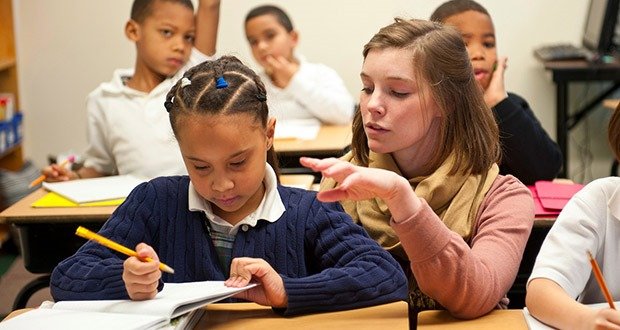 Jim Simons, the legendary founder of hedge fund Renaissance Technologies and a renowned mathematician, has been channeling money to deserving math and science teachers through his philanthropic organization, Math for America. “We give them extra money, $15,000 a year. We have 800 math and science teachers in New York City in public schools today, as part of a core,” said the founder of $22 billion Renaissance Technologies during an interview. “There’s a great morale among them,” he said. “They’re staying in the field. Next year, it’ll be 1,000 and that’ll be 10 percent of the math and science teachers in New York [City] public schools.” Simons started Math for America nearly 20 years ago with his wife, Marilyn Simons. He left Renaissance about six years ago to work with the foundation – though he still has an active role in the hedge fund.

02. Mother is Awakened From Coma by her Newborn Baby 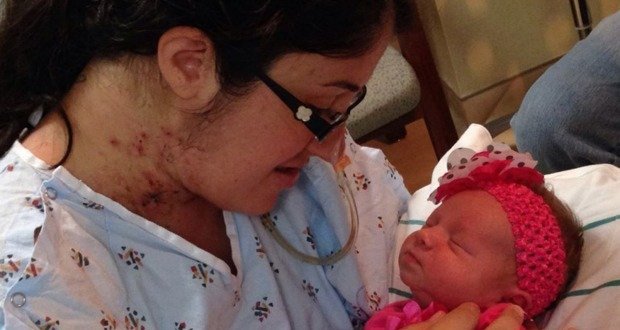 This is an inspirational story of a mother and a newborn baby. A newborn baby has awakened her mother who was in coma. For Shelly and Jeremy Cawley of North Carolina, what should have been one of the happiest moments of their lives took a near fatal turn. Shelly had to go in for an emergency c-section, but during the surgery, a blood clot broke in Shelly’s leg, sending her into a coma. The couple’s newborn daughter, Rylan, was alive and healthy but doctors told Jeremy that his wife just wasn’t waking up. The doctors explained to him that they put Shelly on the ‘last chance’ ventilator. They told Jeremy that they tried all the medicine and machines they had, but were not seeing any progress. Nurses decided to try connecting mother and daughter through their skin by placing Rylan on her mother’s chest. Jeremy says the bond for Ryland was instant, and she fell right asleep on her mom. She was so content the doctors had to make her cry so that Shelly would hear her baby and wake up from a coma. They saw a spike in her vitals when she did cry. Shelly says she believes that mother/daughter bond is what made her fight to stay alive. 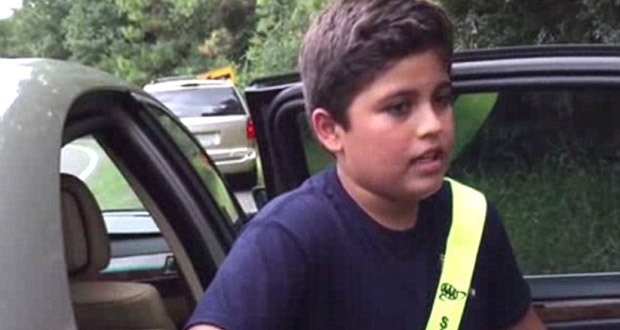 A Florida school bus carrying dozens of students crashed and careened into a lake and everyone made it out uninjured thanks in part due to a 10-year-old boy. The bus took down a signpost and part of a tree before flipping on its side in the water on Thursday in Hillsborough County, located outside of Tampa. Nicholas Sierra, 10, witnessed the driver struggling to bring the bus to a stop. As the bus crashed Sierra sprang into action, helping children off of the bus. “I grabbed a kindergartener’s arms and put her around my neck and brought her to land, and then I went back,” he said. Witnesses also called the bus driver a hero, saying the man stayed on the bus until every child got out safely.

04. Lawyer gives backpacks full of supplies to every elementary school kid in Detroit 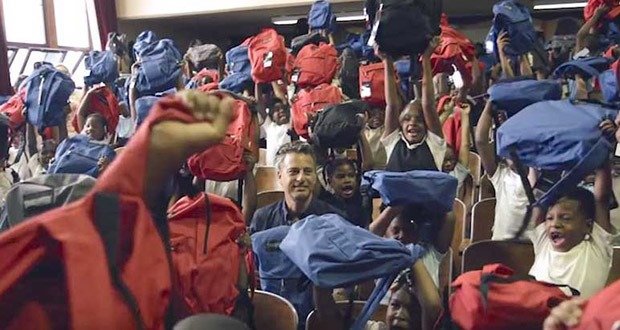 There are 23,000 kids, ranging from kindergarten to grade five, in the Detroit Public School system. Most of them show up to class with used or second-hand school supplies and most of the time, teachers are digging into their own pockets to help them out. During their first week of classes, one law firm in Detroit, Michigan, decided to do something to let those students start off their school year right. The Mike Morse Law Firm with help of the Kids in Need Foundation (KINF) gave away 23,000 backpacks filled with school supplies to students from K through to fifth grade in 65 elementary schools across the region. In May, his firm gave away 400 backpacks to one elementary school. The Detroit Public Schools giveaway was the largest single initiative the KINF has ever taken on during the non-profit’s 20-year history.

05. Dog Stands Guard By Trapped Best Friend for a Week Until Rescued 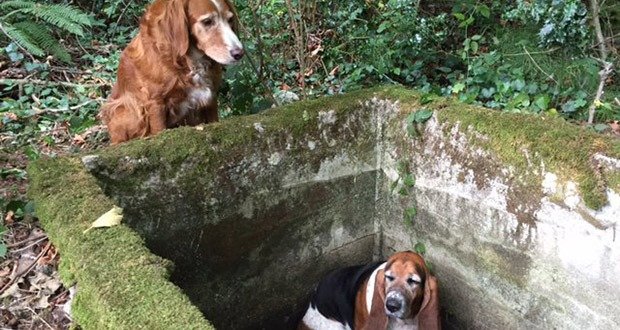 A loyal setter stayed by her best friend’s side for a whole week, after the smaller dog fell into a cistern in Washington state. After the dogs escaped from their home during a party September 7th, they wandered into the woods and Phoebe fell into a small, concrete reservoir. The hole was only a couple of feet deep, but Phoebe, being a basset hound, was just too short to climb out. Tillie, the setter, stood guard beside her friend, venturing down the hill every so often to try and lure humans back to help. Someone finally recognized Tillie from the photo posted by Vashon Island Pet Protectors (VIPP), an animal rescue group, on its Facebook page. They found the setter, resting her head on the side of the cistern, keeping an eye on her little buddy. Both dogs were cold and hungry, but are now doing well. 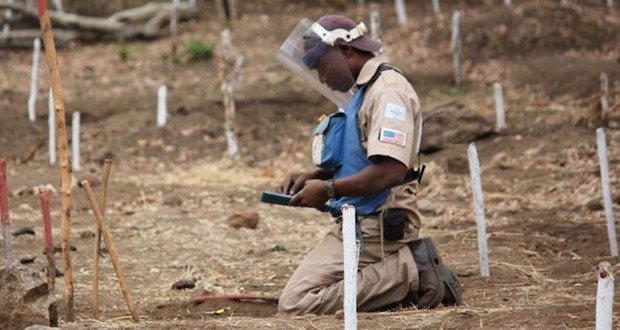 The last landmine in Mozambique has been destroyed. Once the most heavily mined country in the world, the last known explosive was removed this week from the base of a railroad bridge in the center of the country. It becomes the first such contaminated nation to be declared “Mine Free.” Charities worked with Mozambique’s government for 22 years to clear the country, removing more than 171,000 landmines, and opened up more than 4,200 acres of land (1700 ha) for safe passage. HALO trust, the UK charity made famous by Princess Diana, destroyed roughly 80% of the mines in the country. They employed 1,600 local people and used specially built machines in their 22-year successful effort to eradicate the deadly snares. A Belgian charity, Apopo, used trained rats to sniff out landmines in parts of the country. The African giant pouched rats can smell explosives through the ground, but don’t weigh enough to set them off. The decades-long effort to demine the country has opened up roads, bridges, and farmland. It’s also allowed the nation to develop its natural resources like gas, oil, and coal and expand its tourism industry. With the success of the clearing effort, the country’s GDP is now expanding by 7 percent per year, making Mozambique one of the world’s fastest growing economies. 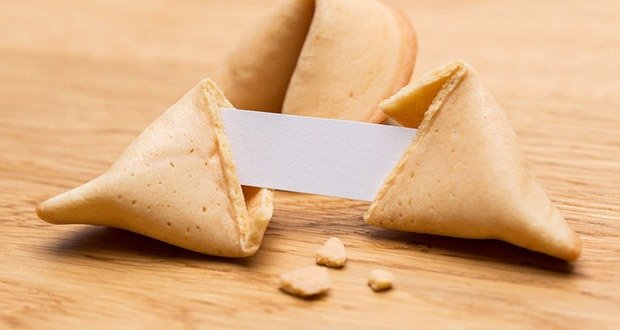 Richard Davis of Boca Raton, Florida, recently claimed his winnings of an August drawing of the Florida Lotto $10 million jackpot and for that, he has his fortune cookie to thank. The lucky man played the numbers he received from a cookie he got from a North Carolina restaurant, according to a press release from the Florida Lottery. Davis, who decided to take home the money as a one-time, lump sum amount of $7,057,696.67, often visits one particular Publix supermarket to buy lottery tickets. The release noted that he plays the same five sets of numbers, all of which were printed on fortune cookies from the same North Carolina establishment. The retailer also received a bonus commission of $50,000 for selling the winning ticket.

08. Pilot Diverts Flight To Save Dog From Freezing To Death 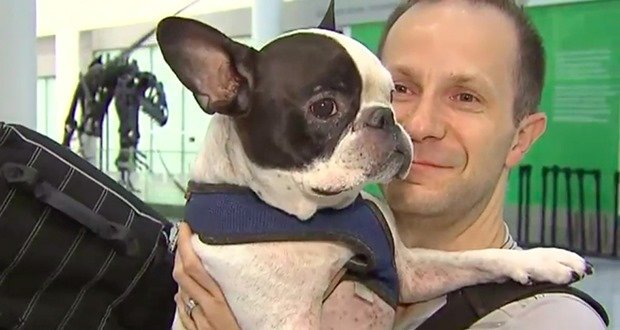 An Air Canada pilot became one dog’s hero when he diverted a flight to save the dog’s life. Flight AC085 was carrying 232 passengers from Tel Aviv to Toronto when the pilot noticed one of the cargo hold heaters was malfunctioning. The unnamed pilot realized that Simba, a seven-year-old French bulldog traveling in the cargo hold on his first flight, was in possible danger of dying. While a heater is not normally a critical component, on this particular flight there was a live animal in the hold. With the altitude it can become very uncomfortable, and possibly the situation could have been life threatening if the flight had continued. Air Canada pilot chose to divert the flight to Frankfurt, Germany, where Simba and his owner, German Kontorovich, could hop on another flight. The pilot chose Frankfurt because a lot of Air Canada flights and partner flights pass through the airport there, which meant the plane could get off the ground again quickly. While it was recognized that it was an inconvenience to the passengers, the overall reaction was positive, particularly once people understood the dog was in potential danger but safe as a result of the diversion. 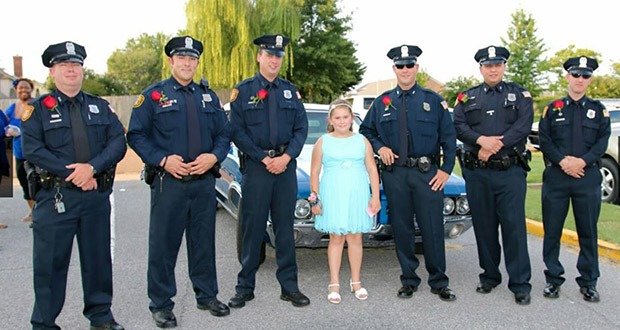 One girl whose father died was able to have a magical time at a father-daughter dance, thanks to these cops who cared. Jewel Warren, an 8-year-old from Memphis, Tennessee, was upset when she received an invitation to attend a father-daughter dance, according to a Facebook post from the Memphis Police Department. Her father, Tim Warren, was a member of MPD who was killed in the line of duty back in 2011. Six officers from her father’s department, however, made sure that Jewel enjoyed the event: They showed up to escort her to the dance earlier this month. The 8-year-old took photos with the officers and danced with them. The cops got involved in the dance after Warren’s widow, Betsy, reached out to Officer Amen’s wife, Taylor, as well as Donna Kirk, a widow of a Memphis firefighter and the founder of Our Fallen Heroes Foundation. They helped connect Betsy with the police force and the officers. The cops weren’t the only ones who worked to make the day special. Florists donated boutonnieres for the officers and a corsage and roses for Jewel, while photographer Amanda Swain volunteered to take photos of the event. The officers successfully put a smile on Jewel’s face that day and they enjoyed the event as much as she did. 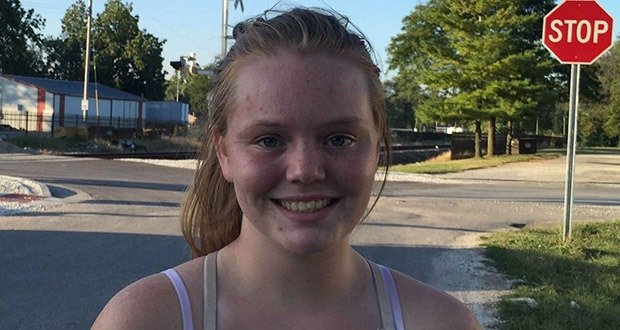 A 19-year-old Illinois woman pulled a 75-year-old man from a set of train tracks moments before a train barreled through at over 80 miles per hour. The young woman, Ashley Aldridge, saved the life of Earl Moorman on Tuesday. Aldridge looked out the window over her home in the town of Auburn, and spotted Moorman, whose motorized scooter was stuck in the tracks at a nearby railroad crossing. Despite her small size, Aldridge was able to pull the roughly 200-pound Moorman out of harm’s way. Aldridge said the train hit his wheelchair just as she got Moorman off of the tracks. Moorman called Aldridge his “guardian angel.” Both he and Aldridge escaped with no injuries.