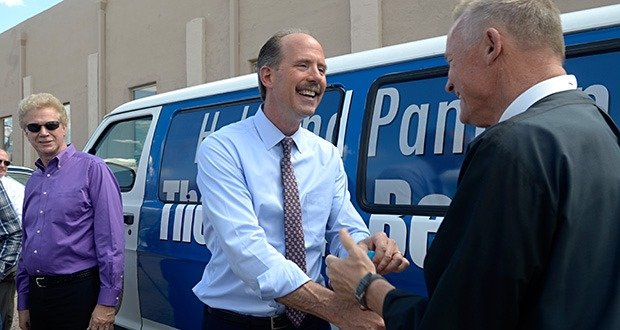 Panhandlers in Albuquerque may soon find a van pulling up next to them, and instead of being offered a quick buck they will be offered employment for the day. As part of a pilot program with the city of Albuquerque and St. Martin’s Hospitality Center, panhandlers who are willing may be able to earn $9 an hour for working on such things as city beautification projects and weed and litter control. The van will pick up the panhandlers early in the morning on Tuesdays and Thursdays. At the end of the work day, the van will take them back to St. Martin’s, where they will be paid in cash, and where staff will help connect them with services for food, temporary shelter, substance abuse, mental health issues and housing. 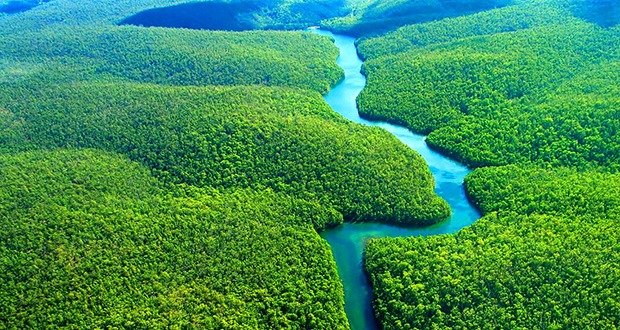 Deforestation rates in the Amazon rainforest have fallen dramatically in the past decade. In 2004 during peak deforestation, a whopping 27,400 square kilometers of Amazon rainforest were cleared in a single year, an area roughly the size of Massachusetts. By 2014, deforestation rates in the Amazon had decreased to 4,800 square kilometers of forest cleared per year, roughly one sixth of the peak rate in 2004. Under current policies, there is hope for reducing Amazon deforestation to zero within the next decade. Such progress is largely thanks to Brazil. As the largest Amazon nation, demographic changes, policies and conservation measures taken by Brazil more or less dictate the future of the Amazon rainforest. Before 2005, Brazil struggled to control rampant expansion into the Amazon and the resulting clear-cutting for ranching and soybean production. You can read more about it in detail here.

03. Forget Oregon’s gunman. Remember the hero who charged straight at him 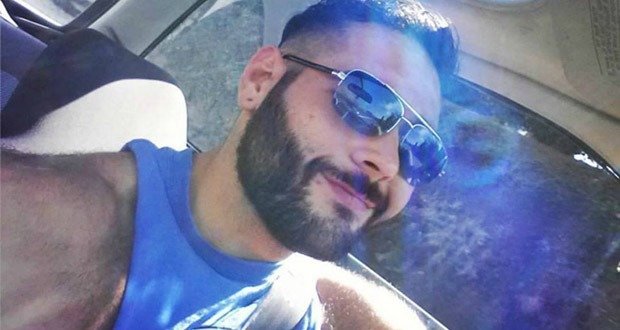 Forget the 26-year-old who murdered 10 innocents at Umpqua Community College on Thursday morning. The one to remember is 30-year-old Chris Mintz, the student and Army vet who was shot at least five times while charging straight at the gunman in an effort to save others. Mintz did so on the sixth birthday of his son, Tyrik. “It’s my son’s birthday, it’s my son’s birthday,” he was heard saying as he lay wounded. The other students present in those horrific moments included a woman who is a nurse. She began administering CPR in a desperate attempt to save one of the mortally wounded. She then held Mintz’s hand and prayed with him while he said again and again that it was his son’s birthday. At the hospital, Mintz underwent at least one surgery. His cousin reports that he is expected to recover. Of course, there were other instances of great courage at UCC, just as there were at Columbine High School and Sandy Hook Elementary School and the Aurora movie theater and the Charleston church and seemingly all the other mass shootings. Yet it is the killers whose names become part of our history. And it is hard not to think that the desire to become more than a lonely loser motivates the gunman. 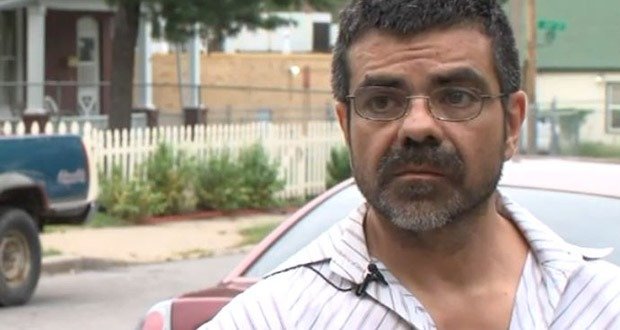 What one officer did this week, is proof. Following a call for suspicious person at a park, officers arrived to find a greater story. “Sometimes I have to sleep outside because I want to keep my job. That’s just how it is,” Samuel Meixueiro said. He says he’s fallen on hard times. With a checkered past behind him, he says a lot of doors have been shut in his face. He lost his home and has been sleeping in a church; walking from Kansas City to Mission every day for work. “It’s a five-to-six hour walk. I’ve been doing it so I can keep my job,” Meixueiro said. On Tuesday, he decided to take a break in Sweeney Park before work. Someone nearby saw him and thought he looked suspicious, and called the cops. Officer Stamper gave him a ride to work, but Meixueiro`s story stuck with him long after he dropped him off. He came back a half-hour later with a bike for Meixueiro and a duffel bag for him to carry all of his things in. Meixueiro says the bike meant the world, but what meant more is someone believing in him and his future. The pair exchanged phone numbers and plan to stay in touch for a long time to come.

05. Finally, productive way to get rid of Styrofoam! 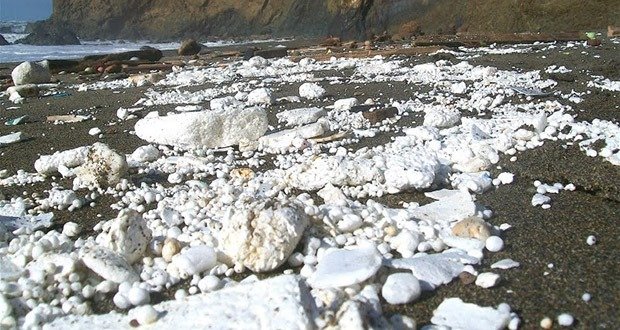 Who would have thought that the container used to transport your take-out food could be a meal itself? For the right consumer, it is. Mealworms, scientists have just learned, will indeed eat styrofoam, which could spell glorious progress in the fight to eliminate plastic waste. Researchers at Beihang University in China and Stanford University in California arrived at this conclusion after putting the worms, larvae of the common American beetle on a diet of nothing but styrofoam. Not only did the bugs digest the plastic into biodegradable compounds, but they were just as healthy afterwards as worms that ate their normal diet. The secret is the microorganisms in the worms’ digestive system. These “bugs-within-the-bugs” produce an enzyme that breaks down the foam into organic compounds. What the mealworms don’t digest, they expel as biodegradable substances that return to nature. On the heels of this awesome revelation, scientists will pursue a theory that these enzymes could potentially also be used to break down other forms of plastic, like microbeads polluting the world’s oceans. 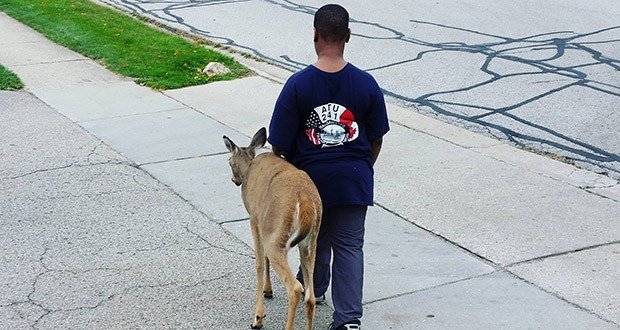 Most kids have some sort of morning routine: eat breakfast, check messages, pick out their clothes….lead a blind deer to food. That’s what this ten-year-old boy chose to do before school every day for a week, taking it upon himself to walk the animal over to a number of nearby grass patches and make sure it had enough to eat. Inspired by the boy’s kindness, the boy’s neighbor, snapped a photo of the duo to share on the Internet, then contacted a local rescue group to see if they could step in to give the deer proper care. As it turned out, many folks in the community had been stepping in to help the animal and lead it away from the road, but the boy was by far the sweetest example. 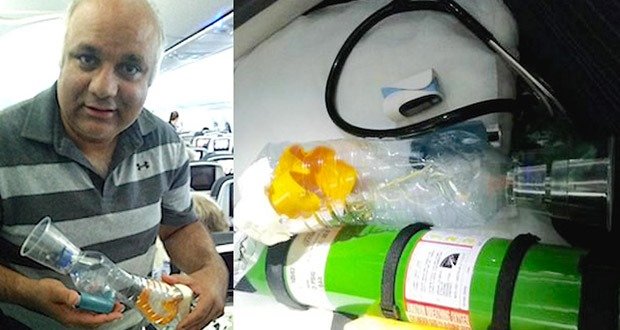 Flying at 35,000 feet over the middle of the Atlantic Ocean, a doctor cobbled together a makeshift medical tool, partly from trash to save a baby’s life. Four hours into the seven-and-a-half hour flight from Spain to the U.S., a two-year-old had an asthma attack, but her medicine was in the family’s checked luggage. Dr. Khurshid Guru answered a flight attendant’s call for a doctor and quickly assessed the situation. He realized girl needed a pediatric nebulizer, a device that delivers a measured dose of medicine to the lungs through a sustained mist. There was only an adult version onboard, but the dose was too strong for the infant. Dr. Guru decided he’d have to make the tool they needed. He grabbed an empty plastic water bottle from the trash, a plastic cup from the drink cart, an emergency oxygen bottle from the plane, and finally, the adult nebulizer. Cutting, taping, and working quickly, he put all the parts together to create a makeshift device that allowed him to control the dose and got the baby breathing again. Dr. Guru doesn’t have much experience with pediatrics, but he is director of the Roswell Park, New York, Cancer Institute’s robotic surgery department and is familiar with making technology do its job to save lives. He may have been the best doctor anyone could have hoped for on that flight.

08. Dozens of Neighbors Harvest Fields for Farmer with Cancer 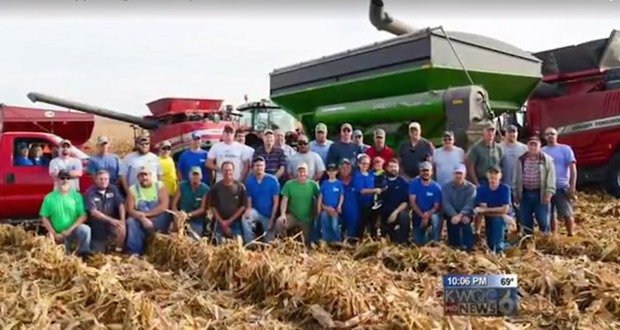 Anyone looking at Carl Bates’ fields would think he raises corn, but it turns out he’s also growing a bumper crop of friends. The farmer, who lives in Galva, Illinois, had 450 acres of grain ready to harvest this year, but couldn’t work the fields because of his cancer treatments. According to his family, Carl is not one to ask for help. Fortunately, his neighbors are quick to offer it. Farmers and local businesses donated ten combine harvesters and 16 semi-trucks, which the volunteers used to harvest all 450 acres in a matter of hours. “It got to be to the point that so many people were showing up, that they actually had to tell people that we have enough, but you want to stay around that’s fine, but we’ve got plenty out in the field there’s no more room,” Carl’s cousin Jason Bates said.

09. Floating Garden Cleans As It Grows In One of Most Polluted Waterways In US 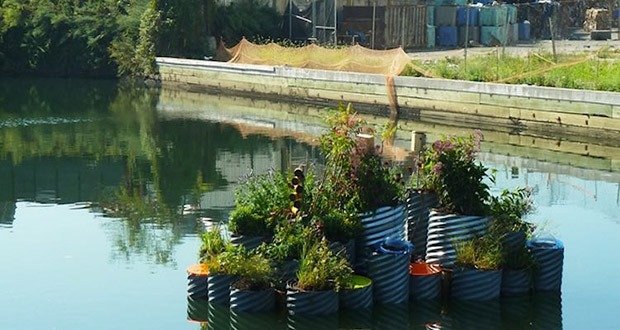 The Gowanus Canal in New York City is notorious for being one of the most polluted waterways in the U.S. Imagine everyone’s surprise when, three weeks ago, an oasis of pure greenery sprouted atop the surface of the river. Not only is this improbable garden a breathtaking sight on the brackish water, but it is also cleaning the stream as it blooms. The project, called GrowOnUs, is an experiment in “floating infrastructure” that utilizes a process called phytoremediation to tidy up the murky canal. Over 30 different kinds of plants act as sponges to purify, desalinate, and mitigate the chemicals affecting the waterway. The plants are grown inside the very same metal culvert piping used to carry sewage waste into the waterway. These “test tubes” are made buoyant by eco-friendly construction materials like coconut fibers and bamboo.

10. Father of the bride stops wedding procession to walk his daughter’s stepdad up the aisle with him 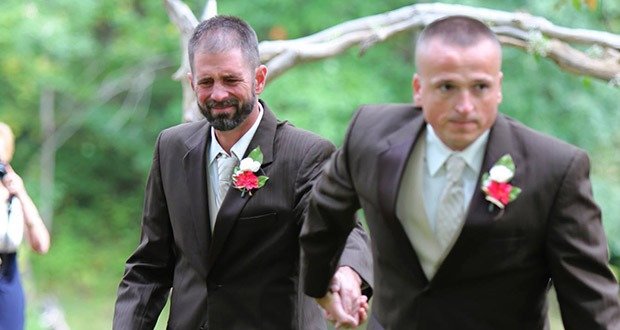 Throughout the wedding planning process, Todd Cendrosky was a good sport. He had accepted that during his stepdaughter Brittany’s ceremony, her biological father, Todd Blackburn, would be the one to walk her down the aisle while he watched from the sidelines. But when the music cued up on the big day, a tug on Cendrosky’s jacket indicated that the plan was about to change. Blackburn said that while the past 14 years have not been without their rough patches, this was the best way he could think of to thank Cendrosky for helping to raise their daughter. Clearly, the moment struck a chord with people: the photos were seen over 15 million times in the first 24 hours after being uploaded to Facebook.

25 Kickass and Interesting Facts About India – Part 2 of 2