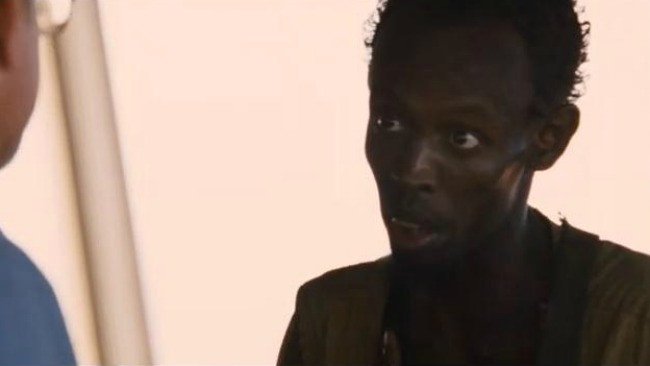 1. Barkhad Abdi had never acted before “Captain Phillips”, was actually born in Somalia, improvised the line “look at me, I am the captain now”, and only made $65k for his Oscar-nominated performance. – Source

2. The real life Captain Phillips was allegedly a “sullen, self-righteous man” who was lowly regarded by his crew members. – Source

3. In the movie “Captain Phillips,” in order to build tension, the actors playing crew members on the ship did not meet the Somali pirate actors until filming the scene when they stormed the bridge. Tom Hanks said they were “the skinniest, scariest human beings I had ever come across”. – Source

5. Abduwali Muse, the real-life pirate that kidnapped Captain Richard Phillips, was only 15-16 at the time. He is now serving 33 years in Prison. – Source

6. The MV Maersk Alabama, the ship hijacked by pirates during the Captain Phillips incident has had four additional unsuccessful hijacking attempts. – Source

7. Unlike what’s shown in the movie Captain Phillips, the pirates that hijacked the Maersk Alabama did take the $30,000 from the safe with them onto the lifeboat. When the Navy killed them all and rescued Phillips, the money was nowhere to be found and is still missing. – Source

8. In real life, one of the men from Richard Phillips’ crew sued him after the incident. He claimed that Phillips was well aware of the danger in the Somali waters but went in anyway endangering all of them because he wanted to get the shipment to harbor faster, even though the shipping company itself sent him a note advising him to avoid the Somali seas.

9. Tom Hanks claimed that all the interior lifeboat scenes were filmed inside a scale model that was actually in water at all times, resulting in him being vomited on by crew members in the cramped space.

10. None of the US Navy crew members of DDG 103, USS Truxtun, including Corpsman Danielle Albert, earned additional/industry-standard pay for their roles. They were considered “on duty” and received only their regular US Navy pay.

11. When Chris Mulkey’s character starts talking about him being in the Union and not being paid to deal with pirates, only Tom Hanks knew that Mulkey was going to start saying those things. The reactions of the rest of the cast were completely real and natural.

12. None of the Somali actors in the film had ever acted before. An open casting call was held in Minneapolis, Minnesota which has the largest population of Somalis in the US. Barkhad Abdi, Barkhad Abdirahman, Faysal Ahmed, and Mahat M. Ali were chosen from over 700 people who auditioned.

13. The negotiator, when asked what his name is, says he is “Nemo.” Nemo, in Latin, means “no one” or “nobody.” Captain Nemo is also a famous fictional character in two seafaring books by the French science fiction author Jules Verne: “Twenty Thousand Leagues Under the Sea (1870)” and “The Mysterious Island (1874)”.

14. Tom Hanks claimed that the scene of Captain Richard Phillips’ medical examination was improvised on the spot with real-life Navy Corpsman Danielle Albert, who was told to simply follow her usual procedure. However, Albert was so star-struck by Hanks that she froze during the first take. Hanks joked to her that he was supposed to be the one in shock for the scene.

15. In real life, the pirates planned to meet up with other pirate groups in the coastal area who held other kidnapped victims and could provide them a clean getaway.