Here are 15 Kickass and Amazing Runways. 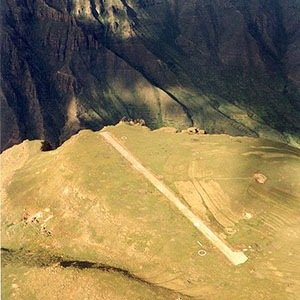 1. There is an airstrip in the South African nation of Lesotho, where you roll your airplane off a cliff and drop until you have enough airspeed to fly – Source

2. The only road connecting Gibraltar to Spain intersects with the Gibraltar airport’s runway. This means that this road has to be closed down every time a plane lands or takes off. – Source

3. The Town of Bar Nunn in Wyoming previously used to be an airport. Its former runways and taxiways now serve as the town’s streets. – Source

4. In 1983, a Mexican private jet made an emergency landing in Mallow, Ireland and had to stay there for five weeks so a runway could be built, during which time the pilot became a local celeb. – Source

5. There is an old cemetery between the runways at Atlanta’s International Airport. – Source 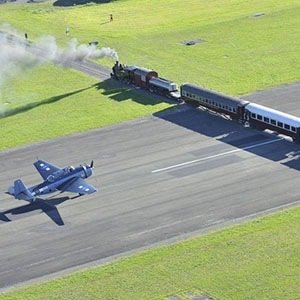 6. Gisborne Airport in New Zealand has railway tracks splitting the runway almost in the middle and very often trains or aircrafts are stopped until one of them moves on. – Source

7. In 1999, a plane crash between two planes trying to land on the same runway in Plant City, Florida ended up with both aircrafts landing with one on top of the other. Everyone survived. – Source

8. There is a house and 2 farms in the middle of the runway at Narita Airport – Source

9. There is an airstrip in Antarctica called the Wilkins Runway that has approximately 10 flights per year and is made out of glacier ice. It has to be leveled with lasers to maintain enough friction for landing aircraft – Source

10. In between the two runways in Bangkok’s Don Mueang International Airport, the 14th busiest airport in the world, there is a fully functioning golf course. Golfers are held back by a red light whenever planes land. – Source 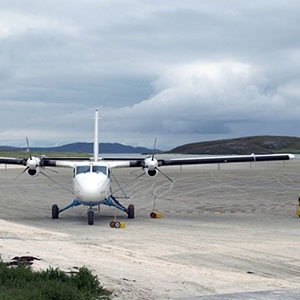 11. The Barra airport in Scotland is one of two airports in the world that use their beach as a runway. – Source

12. There was a plan to escape Nazi Germany’s “inescapable” prison via a homemade glider. The runway was made of tables and it was to be launched by a falling metal bathtub filled with concrete. – Source

13. In 1994, a hardly used public airstrip in Wyoming was designated by the city council as Greater Green River Intergalactic Spaceport for possible refugees from Jupiter – Source

14. Several religious cults in Melanesia (islands in Pacific) believed the cargo brought to American soldiers in the 20th Century was sent from their God. Therefore they built ceremonial airstrips and ports for God to send them cargo, and practice military marches in religious ceremonies. They were known as cargo cults. – Source

15. In WW2, the Nazis had a wooden airfield in Northern France and the British knew about it. Being British, they let them build it and when it was finished they dropped a wooden bomb on it. – Source