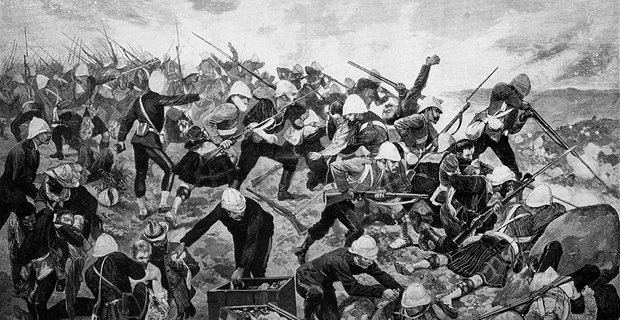 1. Hugh Trenchard, a British soldier in the Boer War, was shot in the chest and spine, becoming partially paralyzed. He took up bobsledding as a hobby, and after a major accident regained use of his legs. – Source

2. Adrian Carton de Wiart fought in the Boer War, World War I & II, was shot in the face, head, stomach, ankle, leg, hip and ear, survived a plane crash, tunneled out of a POW camp, and bit off his own fingers when a doctor wouldn’t amputate them. He later said: “frankly I had enjoyed the war.” – Source

3. Fritz Joubert Duquesne lost his family and farm in the Anglo-Boer War, became a German Spy and traveled the world under different identities till finally, he had his revenge on the British Field Marshal that gave the order. – Source

4. Rugby was so popular in South Africa that in 1902 there was a temporary ceasefire in the Second Boer War so that a game could be played between British and Boer forces (Afrikaners). – Source

5. Early users of the concentration camp model include America, Spain, and Great Britain, with the English being the first to use it to depopulate entire regions and oppress an entire nation’s civilian population (Second Boer War, 1899-1902; 28,000+ women and children dead). – Source

6. Winston Churchill took 60 bottles of booze with him when he set out for the Boer War. – Source

7. Mahatma Gandhi might have been a racist, referring to Blacks as: “savage,” “raw” and living a life of “indolence and nakedness. He also supported the British Empire during the Boer war where over 3500 Zulus were killed. – Source

8. In 1899 during the Boer War, the future PM of Great Britain, Winston Churchill, was taken as a POW by the future PM of South Africa, Louis Botha. Churchill was difficult to contain however and escaped after four weeks of captivity. – Source

9. The St. Louis World’s Fair featured “the greatest and most realistic military spectacle known in the history of the world”: a massive re-enactment of two battles from the Anglo-Boer War, including 400 Afrikaner and British veterans. – Source

10. In 1900 France and Russia asked Kaiser Wilhelm II to form an alliance and attack Britain, whose military was busy fighting the 2nd Boer war at the time. Wilhelm declined and immediately told Queen Victoria about the plot. – Source

11. The first scouts were a group of child soldiers in the 2nd Boer war whose job was to carry messages between fortresses in the war, with a 13 yo Warner Goodyear as Sergeant-Mayor. – Source

12. Until 1899, wristwatches were primarily worn by women. It was only due to the Boer War that British soldiers adopted wristwatches, finding their traditional pocket watches too cumbersome. – Source

13. Queen Victoria personally crocheted 8 scarves to be given to members of her forces that fought in the Boer War – 4 were reserved for soldiers from the colonies. – Source

14. King Edward VII on his way to Denmark through Belgium was the victim of an attempted assassination when fifteen-year-old Jean-Baptiste Sipido shot at him in protest over the Boer War. Accusing him of causing the slaughter of thousands during the Boer War in South Africa. – Source

15. The reason that many stadiums in England have stands called ‘The Kop’ is because they resemble the Battle of Spion Kop from the Second Boer War. – Source

25 Uplifting Headlines of the Week - Part 22

March 27, 2017
Latest Posts
Subscribe to Blog via Email
Did you know?
Loading...
Facts of the Day
Registration is disabled.