Here is a compilation of rare natural phenomenon that inspires awe and wonder. 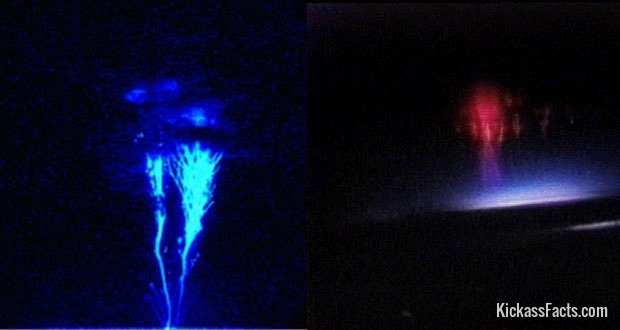 Red sprites and blue jets are very high altitude upper atmospheric phenomena associated with thunderstorms. They have only recently been documented on camera. Red sprites are massive (as big as 20 km in size), but faint luminous flashes that appear directly above an active thunderstorm and coincide with powerful lightning strikes. Blue jets too are a high altitude optical phenomenon but are different from sprites. They were first documented in 1994. Blue jets are optical ejections from the top of the core regions of electrically active thunderstorms but are not directly associated with ground lightning strikes. 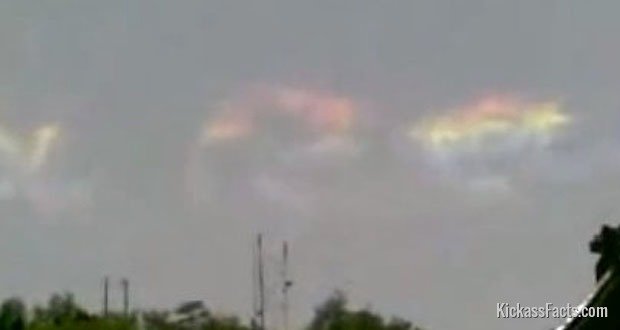 Earthquake lights are an unusual luminous atmospheric phenomenon. They are usually reportedly in areas of high seismic activity or volcanic eruptions. They were believed to be myths until they were photographed in 1965 during the Matsushiro earthquake of Japan. It was then that seismologists worldwide accepted of their existence. Earthquake lights are caused by an unknown mechanism. They are either white, blue or multi-spectrum. 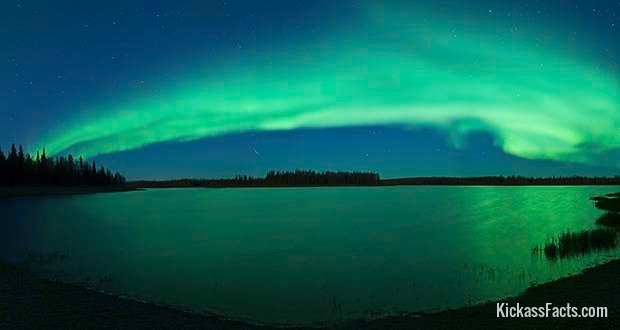 Aurora or polar light are mesmerizing natural light display in the skies of high latitude regions. They are caused when energetic electrically charged particles from solar wind accelerate along the magnetic field lines into the upper atmosphere, where they collide with gas atoms, causing the atoms to give off light. The auroral zone is typically 10° to 20° from the magnetic poles. 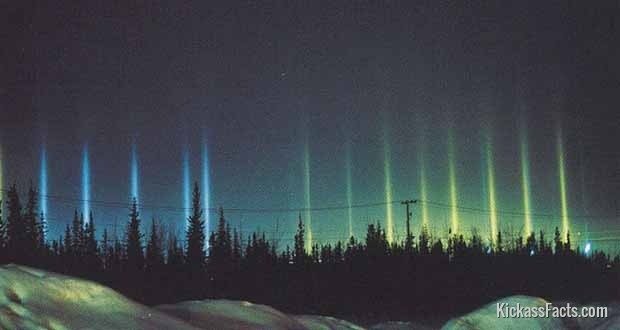 A light pillar is a visual phenomenon created when light is reflected off by ice crystals giving out roughly horizontal parallel light beams. The light can come from the sun (just before sunrise or after sunset), moon or from terrestrial sources such as streetlights. The pillars are not physically over the lights or anywhere else in space. They are purely collected beams of light reflected from all the millions of crystals, which just reflect light towards the observer’s eyes. 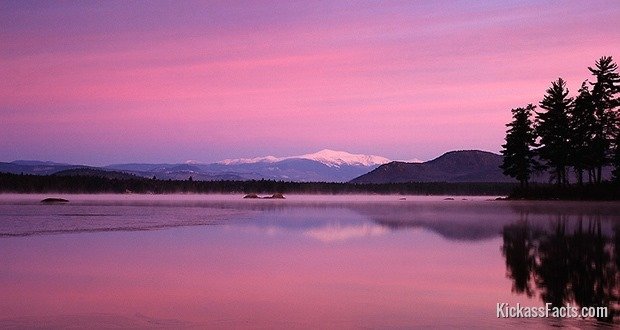 The Belt of Venus or Venus’s Girdle is an atmospheric phenomenon seen shortly after sunset or before sunrise. A pinkish glow can be observed in the horizon that extends roughly about 10°–20° above it. Often times the glow is separated by a dark layer from the horizon which is the Earth’s shadow. This pink color is due to backscattering of reddened light from the rising or setting sun. A very similar phenomenon can be observed during a total solar eclipse. 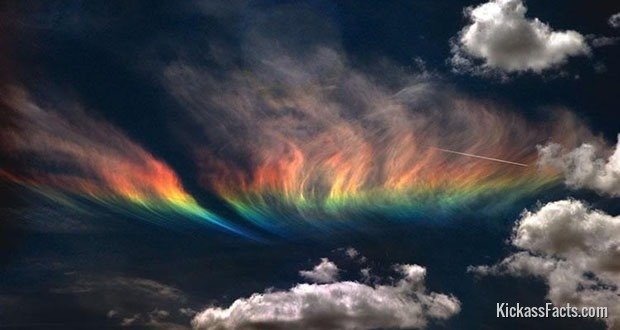 These are very uncommon phenomenon that occur only in cirrus clouds which are wispy and thin. Though its name suggests it to be a hot and flammy phenomenon, it takes place mostly in cooler climate. This spectacular event is very short lived. It is formed when sunlight hits ice crystals at a particular angle. 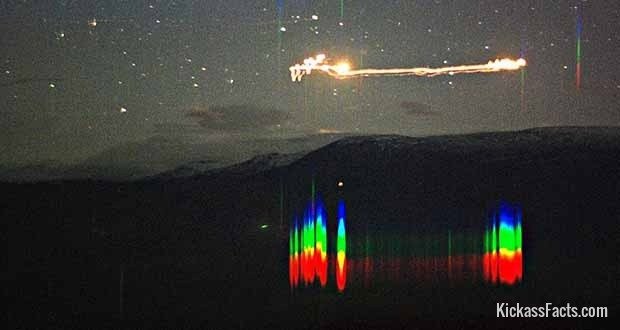 Hessdalen Light is an unexplained light phenomenon that occurs in the Hessdalen valley of Norway. They were observed over 15 to 20 times per week from 1982 until 1984. Since then, the activity has decreased and now the lights are observed about 10 to 20 times per year. 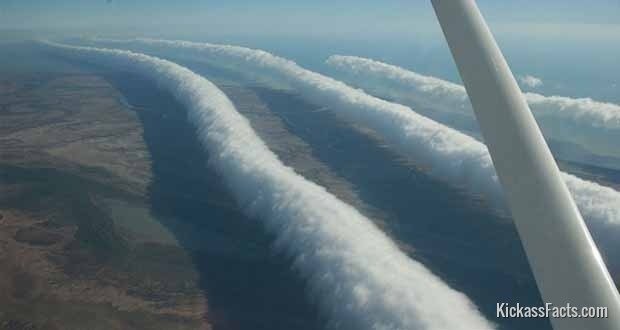 Morning Glory clouds are very rare types of clouds. They can stretch 1,000 kilometers long and occur at altitudes of up to 2 km. Although similar clouds are seen in many places worldwide, the ones over Burketown, Queensland in Australia occur predictably every spring. These tubes and the surrounding air can cause dangerous turbulence for airplanes when clear. They can achieve wind speeds up to 60 kph. 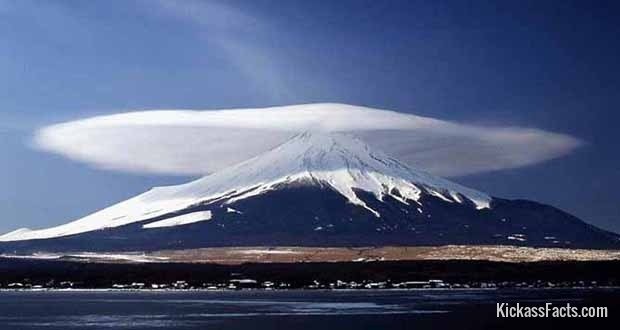 They are stationary lens-shaped and sometimes multilayered clouds that form at high altitudes. They are formed when moist air is forced to flow upward around mountain tops. Due to their shape, they have been offered as an explanation for some UFO sightings. 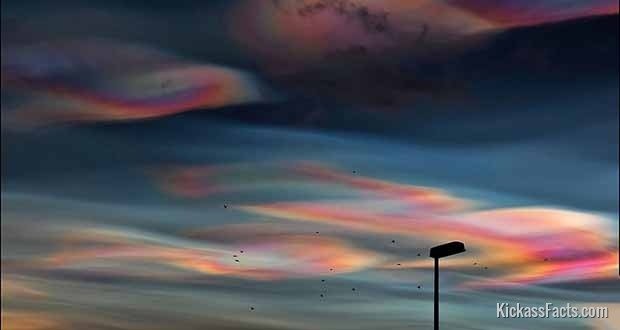 Polar Stratospheric Clouds exist at very high altitudes within Earth’s stratosphere (around 70,000 ft). Clouds normally do not form in the stratosphere because of its extreme dryness. During winters, however, in high latitudes temperature falls low enough to permit formation of clouds in the stratosphere. These clouds appear colorful when sunlight is refracted off ice crystals. They are only noted during sunrise and sunset. 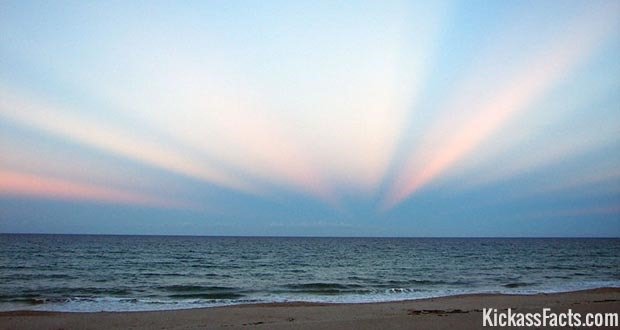 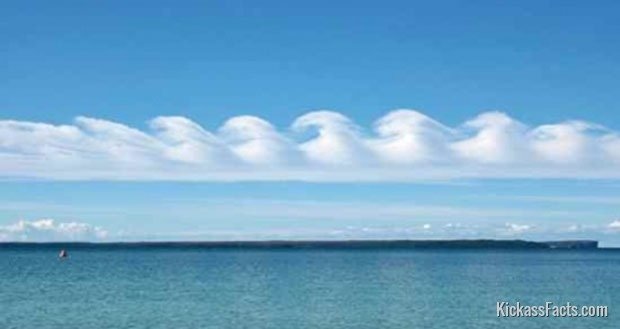 Kelvin-Helmholtz Clouds are also known as billow clouds, shear-gravity clouds, KHI clouds, or Kelvin-Helmholtz billows. The swirls at the top of the cloud layers are normally evenly spaced. These are often good indicators of atmospheric instability and the presence of turbulence for aircraft. The wave structure is formed when two different layers of air move at different speeds in the atmosphere. The clouds often form on windy days where there is a difference in densities of the air. 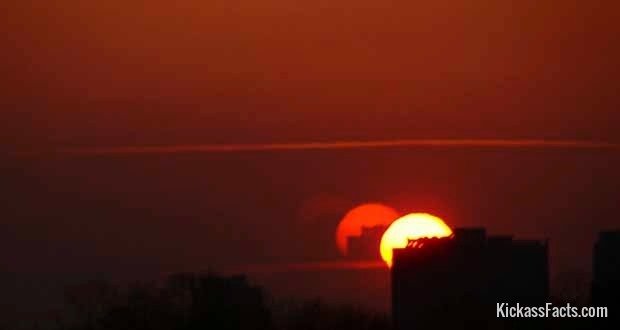 Though it is hard to spot there are actually three suns side by side in this picture. It was taken near Gdansk Bay in Poland. Though it looks like an inner reflection of the camera, the photographer admitted that it was observable even with the naked eye. 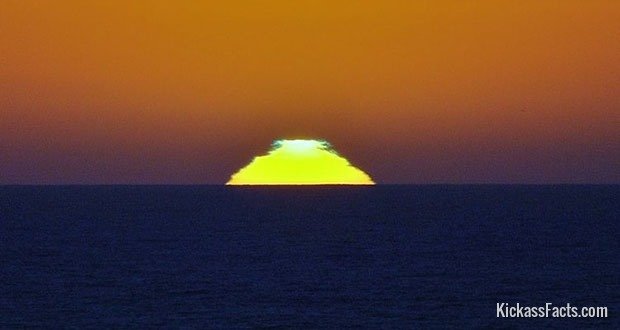 Green flashes and green rays are optical phenomena that occur shortly after sunset or before sunrise. A bright green spot is visible no more than a couple of seconds on top of the sun. They can be observed from any altitude (even from an aircraft). They are usually seen at an unobstructed horizon like an ocean, but are even possible over cloud tops and mountain tops. 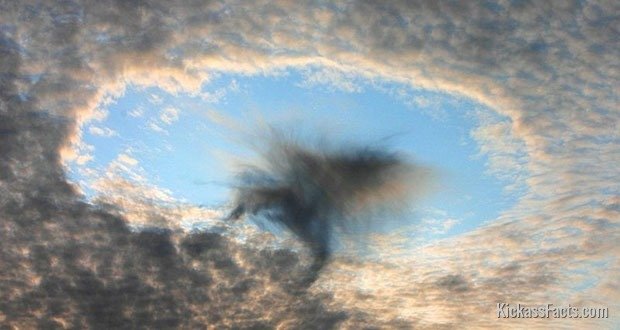 A fallstreak hole, hole punch cloud or skypunch is a large circular gap, that can appear in high altitude small clouds. The holes are formed when the water temperature in the clouds is below freezing but the water has not frozen yet due to failure of ice nucleation. When ice crystals do form they will set off a chain reaction causing the water droplets around the ice crystals to evaporate leaving a large circular hole. 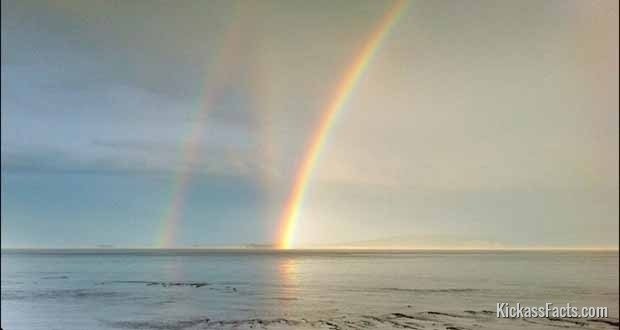 Rainbows are formed when sunlight is refracted off water droplets suspended in air. Sometimes when sun breaks through dark thunderclouds during a heavy downpour, more than one rainbow is created that is only visible against a dark backdrop. 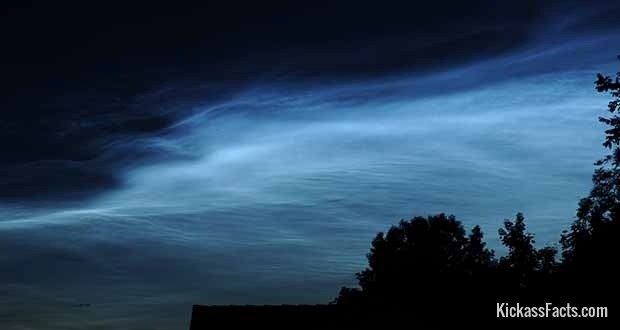 Night clouds or noctilucent clouds are dull luminous mesospheric clouds in the upper atmosphere. They are visible in a deep twilight. They are made of crystals of water ice and most commonly are observed in the summer months at latitudes between 50° and 70° north and south of the equator. They can only be observed when the Sun is below the horizon.

Mammatus clouds or mammatocumulus are a cellular pattern of pouches hanging underneath the base of a cloud. They are formed in sinking air contrary to any other form of clouds that are formed in rising air. There are various hypotheses offered behind the mechanism of its formation. 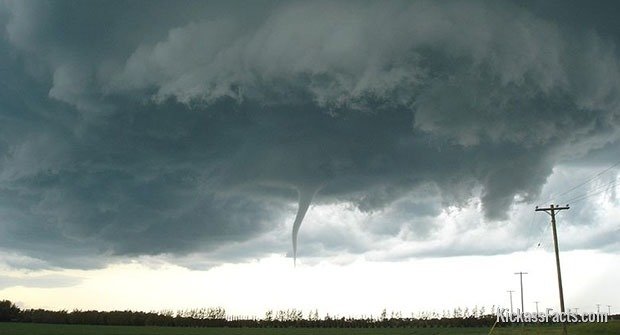 As the name suggests, it is a funnel-shaped cloud of condensed water droplets. It extends from the base of a cloud (usually cumulonimbus), but never reaches the ground. Funnel clouds are usually visible as a cone-shaped protuberance from the main cloud base. They are most frequently spotted during thunderstorms. If it touches the ground it becomes a tornado. 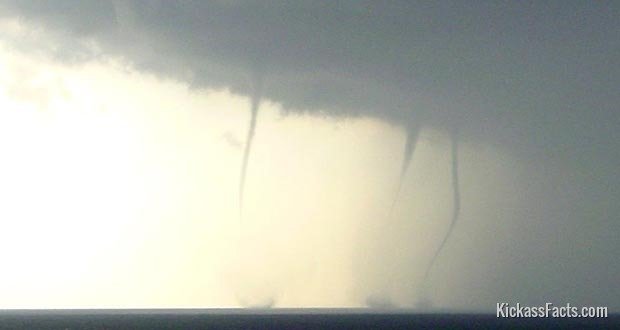 A waterspout is an intense columnar vortex connected to a cumuliform cloud that occurs over a body of water. They are often weaker that most of its land counterparts. They do not suck up water. They are mostly observed in tropic and warm climate zones. 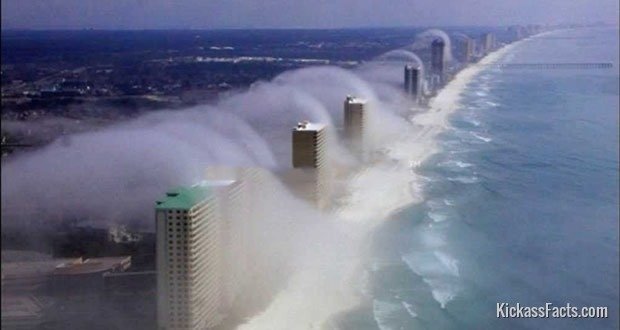 This photo was taken in Panama City, Florida. Fog is seen rising off the Gulf and over the buildings along the beach, giving it a tsunami effect. According to a meteorologist this was due to “highly localized orographic lifting.” The fog formed in spots where the onshore breeze was forced to rise up and over the tall buildings. The ascending air cooled and the water vapor condensed, forming fog. 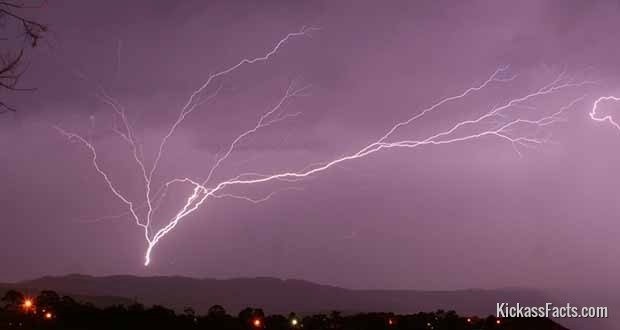 Upward lightning is rare. Most lightning streams either between clouds or from a cloud to the ground. In this special case, electrons stream earthward, producing an electrical current and a bright streak of light like a tree branching out. 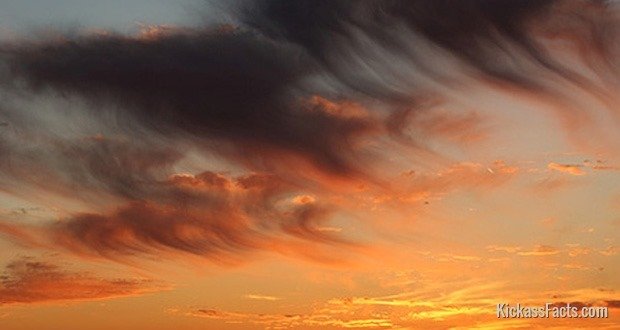 Virga is an observable wisp of precipitation that falls from a cloud, but evaporates before reaching the ground. It is very common in the desert and in temperate climates. In North America, it is commonly seen in the Western United States and Canadian Prairies. 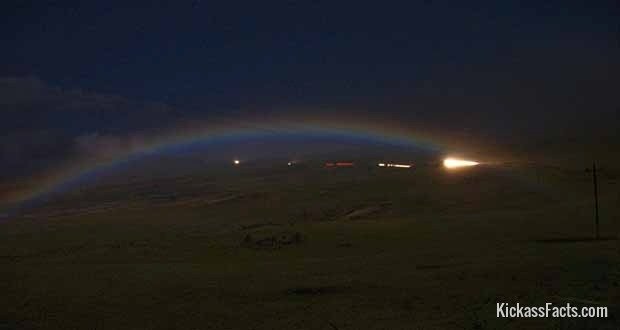 A moonbow is a rainbow produced by moonlight rather than from direct sunlight. Moonbows are usually faint. Because of the faint light usually it becomes difficult for the human eye to discern colors in a moonbow and as a result they often appear to be white. However, all colors of a moonbow do appear in long exposure photographs. 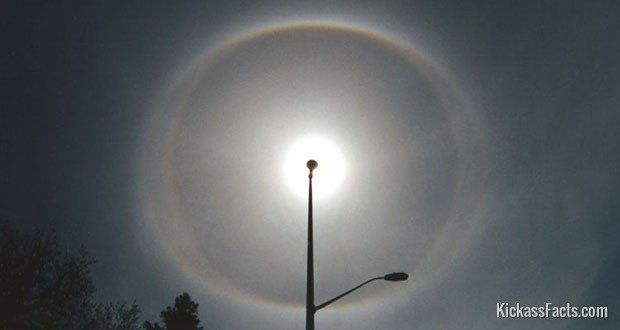 Halos are optical phenomenon produced by ice crystals creating colored or white arcs in the sky. Mostly they are visible near the sun or moon, but sometimes they can be seen even in the opposite part of the sky. In extreme cold weather they can also form around artificial lights.