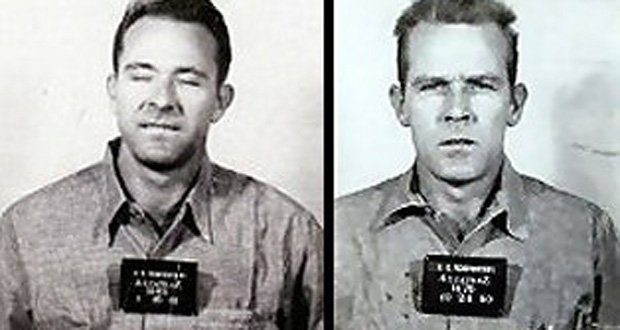 1. While John and Clarence Anglin, 2 of the 3 men who ever escaped from Alcatraz, were officially reported to have drowned in the bay, their mother received flowers anonymously every Mother’s Day until she died, and two very tall unknown women were reported to have attended her funeral. – Source

2. Alcatraz was the only federal prison at the time to offer hot-water showers for its inmates. The prison staff reasoned that prisoners acclimated to hot water would not be able to withstand the freezing waters of the San Francisco bay during an escape attempt. – Source

3. When the movie “The Rock” premiered on Alcatraz in 1996 a man windsurfed to the island wearing a wing collar tuxedo shirt and bow tie, and then snuck into the celebrity party. He claimed to have already had a cocktail with Sean Connery by the time he was caught. – Source

5. Alcatraz had some of the best food in the prison system. – Source

6. Frank Morris and his partners may have truly escaped from Alcatraz. In 2011, newly uncovered reports show a raft was found with footprints leading away and a car was reported stolen in the area that night. – Source

7. During James C Lucas’s time at Alcatraz, he was convicted of murder, bank robbery and escaping from a Texan prison, he stabbed Al Capone, murdered a prison guard, attempted an escape in which one prisoner was killed, sentenced to life, spent six years in isolation, released in 1958 and died in 1998. – Source

8. Birdman of Alcatraz (1962) people wanted Robert Stroud’s release, but no one knew Stroud was one of the most violent prisoners in the history of Alcatraz! He stabbed to death a prison inmate and a guard. – Source

9. Serial Killer Daniel Camargo escaped Gorgona Prison (Colombian Alcatraz) and went to rape and kill at least 70 women and girls in The Equator. He was killed in prison by a victim’s cousin. – Source

10. There is a bar/restaurant in Tokyo, Japan called Alcatraz E.R. When you enter, a nurse handcuffs patrons and lead, you to a small dark room with bars, and then serve you drinks in severed bloody doll heads, whilst the entertainers harass you with masks and props. – Source

11. Victor Lustig was a con artist most known for a scam in which he literally managed to “sell the Eiffel Tower”. He also successfully scammed gangster Al Capone out of $5,000, In addition to running a counterfeit banknote operation which he was eventually caught and sent to Alcatraz Island for. – Source

12. Infamous mobster and inspiration for Jack Nicholson’s character in The Departed, James “Whitey” Bulger, volunteered for the government’s MK-ULTRA program while imprisoned at Alcatraz. – Source

13. On March 21, 1963, Alcatraz was closed due to the high cost of maintenance and poor reputation. – Source

14. Kenneth Williams flew in a bomber in ww2 called Murder Inc. The Germans used it as propaganda, saying he was a Chicago gangster specially released from Alcatraz by FDR to kill women and children. – Source

15. Al Capone played banjo in a band called The Rock Islanders while incarcerated at Alcatraz. – Source