1-5 Interesting Behind the Scene Facts 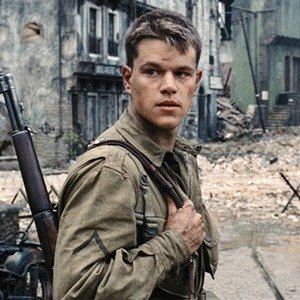 1. Saving Private Ryan: Before filming began, several of the film’s stars, including Edward Burns, Barry Pepper, Vin Diesel, Adam Goldberg, Giovanni Ribisi, and Tom Hanks, endured ten days of “boot camp” training led by a Marine veteran for realistic military portrayals. Matt Damon was intentionally not brought into the camp, to make the rest of the group feel resentment towards the character. They were trained by USMC retired Captain Dale Dye. Dye had a small on-screen role in Saving Private Ryan (alongside Bryan Cranston) and played Colonel Robert Sink in Band of Brothers.- Source

2. Raiders of the Lost Ark: The filmmakers discovered to their chagrin that the snakes used for the Well of Souls sequence weren’t afraid of fire at all. In fact, they would always try to get closer to the fire to warm themselves. At one point director Spielberg was caught on camera picking up a snake and telling it, face to face, “In the script, you’re supposed to hate fire. Why do you like fire? You’re ruining my movie.” – Source

3. The Blues Brothers: When filming Blues Brothers, with John Belushi and Dan Aykroyd, Carrie was often drunk and did so much drugs that even Belushi was warning her that she had a problem. – Source

4. The Blues Brothers: While filming on a deserted lot in Harvey, Illinois, John Belushi disappeared, which was not uncommon. On a hunch, Dan Aykroyd followed a grassy path until he spied a house with a light on. “Uh, we’re shooting a film over here,” Aykroyd says he told the homeowner. “We’re looking for one of our actors.” The confused homeowner informed, “Oh, you mean Belushi? He came in here an hour ago and raided my fridge. He’s asleep on my couch.”

5. Anchorman: During the Sex Panther scene, Paul Rudd was determined to make Will Ferrell laugh and break character since it was always the other way around. He thought that this would be accomplished with the “60% of the time it works, every time” line. Will fired back with “that doesn’t even make sense” line without skipping a beat once again making Paul/Others break character yet again.

6-10 Interesting Behind the Scene Facts 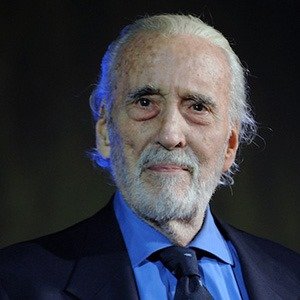 6. Lord of the Rings: Christopher Lee was a Special Forces commando, and corrected Peter Jackson on the actual sound one makes when being stabbed in the back. While shooting the stabbing shot with Christopher, Peter Jackson was explaining to him what he should do and he said, ‘Peter, have you ever heard the sound a man makes when he’s stabbed in the back?’ to which he said, ‘Um, no.’ and Christopher Lee said “Well, I have, and I know what to do.” – Source

7. The American Humane Association monitored the filming of scenes involving Brooks’ crow. During the scene where he fed it a maggot, the AHA objected on the grounds that it was cruel to the maggot, and required that they use a maggot that had died from natural causes. One was found, and the scene was filmed. – Source

8. Harry Potter and the Chamber of Secrets: Daniel Radcliffe, who plays Harry Potter, said that while they were filming, Bella (dog) the Neapolitan mastiff became quite protective of him, so much so that when they were filming the scene with Aragog, and the spider was an animatronic spider, Bella would jump in front of him in order to protect him. This resulted in having to refilm the scene multiple times.

9. Lord of the Rings: The scene where Viggo Mortensen kicks the helmet near a pile of orcs, he actually screams so hard because he broke two toes. They actually used the footage in the movie. – Source

10. The Shining: The little boy, who played Danny in, was closely guarded by Kubrick during filming and didn’t know it was a horror film until several years later. He has since abandoned acting and gone on to become a science teacher. – Source

11-15 Interesting Behind the Scene Facts 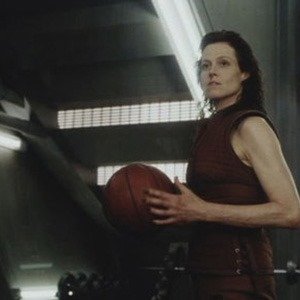 11. Alien: Resurrection: Sigourney Weaver really did make that no look, over the shoulder basketball shot. It was one of the first takes as well and she wasn’t even supposed to make the shot. They were going to use CGI. That look of “oh wow” from everyone is 100% legit. Ron Perlman almost blew the take because he was so surprised. – Source

12. Total Recall: While filming, Schwarzenegger noticed the Michael Ironside was constantly on the phone between takes. When he broached the subject with Ironside, he was told the he was phoning his sister and that she was currently suffering from cancer. Arnold immediately brought Michael to his trailer and they had an hour long 3 way conversation with the sister about what exercises to do and what kinds of foods she should be eating and really lifting her spirits. Ironside has never forgotten Schwarzenegger’s kindness and neither has his sister. – Source

13. Interstellar: American theoretical physicist Kip Thorne, working on the movie did so much physics equations to get the wormhole and black hole effects right that his work is going to be published into a scientific paper. – Source

14. Rope (1948): The movie composed of just a few very long takes. The dollycam (which is extremely heavy and on rails) ran over a crewmember’s foot, breaking it. This happened pretty deep into a good take, so another stagehand just covered his mouth and dragged him off set rather than let his screams of pain ruin a lot of work.

16-20 Interesting Behind the Scene Facts 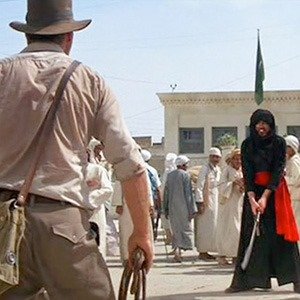 16. Raiders of the Lost Ark: The famous scene in which Indy shoots a marauding and flamboyant swordsman was not in the original script. Harrison Ford was supposed to use his whip to get the swords out of his attacker’s hands, but the food poisoning he and the rest of the crew had gotten made him too sick to perform the stunt. After several unsuccessful tries, Ford suggested “shooting the sucker.” Steven Spielberg immediately took up the idea and the scene was successfully filmed. – Source

17. The Dark Knight: Reportedly, the scene outside the hospital where Joker expresses displeasure at the lack of explosions was unscripted; a majority of the explosives failed to detonate, so Ledger’s ‘that’s it?’ shrug and fiddling with the trigger mechanism are all improvised. His running like hell when the rest of the explosives went were also improvised. – Source

18. Apocalypse Now: When Francis Ford Coppola and George Lucas (close friends and filmmaking buddies) were planning the movie, they gave a small role to their carpenter, Harrison Ford, in return for Ford’s work on a desk for Coppola’s office. Ford also got a role in Lucas’ American Graffiti a few years prior this same way.

19. Star Wars: Episode V – The Empire Strikes Back: During production, great secrecy surrounded the fact that Darth Vader was Luke’s father. Like the rest of the crew, Prowse—who spoke all of Vader’s lines during filming—was given a false page that contained dialogue with the revelatory line being “Obi-Wan killed your father.” Hamill did not learn of the plot point until just before the scene was filmed, astounding the actor; Kershner advised him to ignore Prowse’s dialogue and “use your own rhythm”. – Source

20. Cast Away: The production of was shut down for a year so Tom Hanks could lose the required weight and grow a beard for his character’s development.. Instead of just sitting around waiting, director Robert Zemeckis and his crew used the hiatus to make the movie What Lies Beneath. – Source

21-25 Interesting Behind the Scene Facts 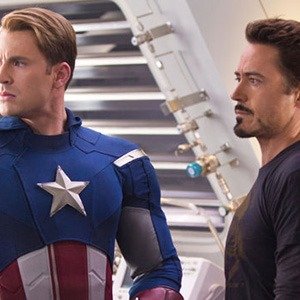 21. Avengers Assemble: Robert Downey Jr. kept food hidden all over the lab set and apparently nobody could find where it was, so they just let him continue doing it. In the movie, that’s his actual food he’s offering and when he was eating, it wasn’t scripted. He was just hungry. – Source

22. Twilight Zone: The Movie: While filming, the helicopter crashed after spinning out of control and killing three actors (two of them were child actors). Director John Landis, Associate Producer George Folsey, Jr, production manager Dan Allingham, pilot Dorcey Wingo and explosives specialist Paul Stewart were tried and acquitted on charges of manslaughter in a nine-month trial in 1986 and 1987. – Source

23. Apollo 13: The cast and crew flew between 500 and 600 parabolic arcs in NASA’s KC-135 airplane (nicknamed the “Vomit Comet”) to achieve real weightlessness. Each of the arcs got them 23 seconds of zero gravity. All of these flights were completed in 13 days. The actual KC135 used (NASA serial number N930NA) was decommissioned in 2000 after 27 years of service and is on display at Ellington Field. – Source

24. The Crow: Bruce Lee’s son Brandon Lee’s died during a mishap on the set. A scene required a gun to be loaded, cocked, and then pointed at the camera. Because of the close-range of the shot, the dummy cartridges loaded had real brass caps, bullet, but no powder. After the cut, the props master (not the arms master – he had left the set for the day) dry-fired the gun to get the cock off, knocking the projectile/bullet into the barrel of the gun. The next scene to be filmed involving that gun was the rape of Shelly. The gun was loaded with blanks (which usually contain double or triple the powder of a normal cartridge to make a loud noise). Lee entered the set carrying a bag of groceries containing an explosive blood pack. The script called for Funboy (Michael Massee) to shoot Eric Draven (Lee) as he entered the room, triggering the blood pack. The bullet that was stuck in the barrel was blasted at Lee through the bag he was carrying, killing him. The footage of his death was subsequently developed and used as evidence in the investigation into his death. As part of the lawsuit settlement, the footage was later destroyed. – Source

25. Die Hard: For the shot where Hans Gruber falls from the top of the building, Alan Rickman was actually falling from a 21-foot high model. He was holding on to a stunt man and falling on to an air bag. To get the right reaction, the stunt man dropped Rickman on the count of two, not three The shock on his face as he’s released is all real. Rickman was angered by the surprise plunge, especially since he had serious misgivings about the safety of the stunt fall in the first place. – Source