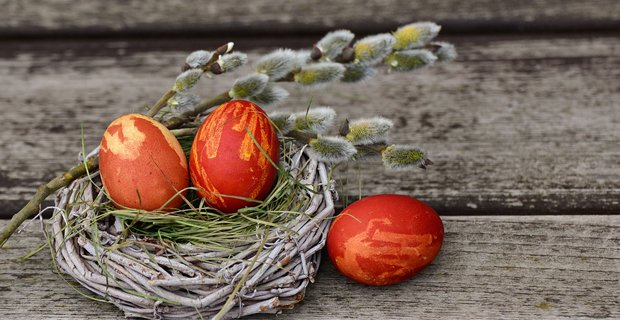 1. Easter Day is determined by an astronomical event (the Sunday after the first full moon of the Vernal Equinox). – Source

3. There is a Polish celebration on Easter Monday that involves boys throwing water on girls and spanking them with pussy willows. – Source

4. Swedish and Scandinavian children dress up as witches and go door-to-door asking for candy on Easter. – Source

5. Two rival churches in Greece celebrate Easter by firing over 100,000 rockets at each other. – Source

6. Bunnies were once believed to be hermaphroditic and able to mate without losing their virginity- that’s why the Easter Bunny is a symbol for Marie, with eggs being a symbol of rebirth, which is traditionally dyed red for Christ’s blood. – Source

7. In 2285, Easter will likely fall on March 22, the earliest date at which Easter can start. It will be the first time since 1818 in which Easter has occurred on that date. – Source

8. In 1919 after becoming an officially secular country, Uruguay renamed the holidays of Christmas Day to “Family Day”, Holy Easter Week to “Tourism Week”, and Epiphany to “Children’s Day”. – Source

9. There are Easter eggs for the blind. They beep so children are able to hunt for them. – Source

10. In Norway, a contemporary tradition is to read or watch murder mysteries at Easter. – Source

12. Tasmania has an extra day of Easter – Easter Tuesday. It is only celebrated in Tasmania. – Source

13. Mexican Americans have an Easter tradition of filling empty egg shells with confetti called Cascarón and breaking them over people’s heads for good luck. – Source

14. AD and BC were invented in 525 AD by Dionysius Exiguus to determine the correct date of Easter. – Source

15. The entire German state of Hesse is covered by a ban on public dancing during the hours of 4 am and 12 noon at Easter. – Source