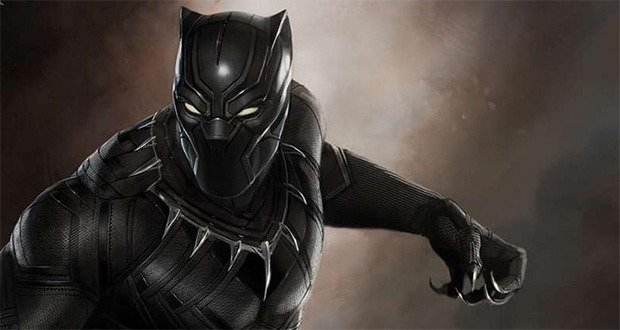 2. T’Challa had a much smaller role in the earlier drafts and did not even appear in costume, as the writers intended to put more focus on Spider-Man and save Black Panther’s origin for his own movie. However, when it looked like Marvel would not be getting permission to use Spider-Man, Black Panther’s role was beefed up significantly. By the time they did get to use Spider-Man, T’Challa had already become so integral to the plot that they decided to leave his role as it is and give Spider-Man a smaller part.

3. Tony Stark (Robert Downey Jr.) remarks how attractive Aunt May (Marisa Tomei) is. Downey and Tomei actually had a relationship in the 1990s, and appeared in two other films together: Chaplin (1992) and Only You (1994).

4. In the film, the Falcon utilizes a falcon drone called Redwing. In the mainstream Marvel comics, Redwing was an actual falcon, which was Sam Wilson’s sidekick.

5. Co-director Joe Russo said that “the most powerful shot of the film” was Steve Rogers stopping a helicopter from taking off, with his bare hands. The shot was even featured in the first teaser trailer for the film. Russo said Chris Evans worked very hard in the gym to physically embody the character because they wanted to test the limits of Steve’s physical strength. About the shot itself, he noted, “On set, we had Chris straining against a crane, holding the helicopter to get this fantastic shot of his muscles bulging, and you can feel the energy and determination as he tries to stop it.” 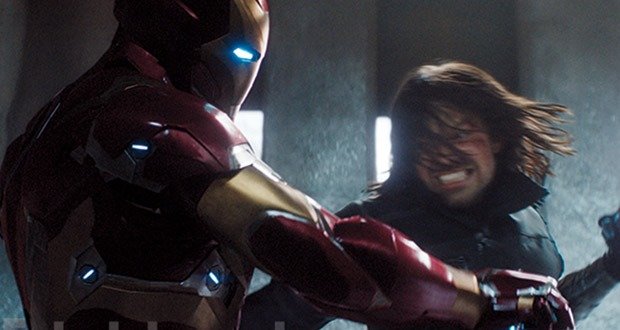 6. The day before filming a fight scene with Robert Downey Jr., Sebastian Stan sent him a video of himself doing intense bicep curls in front of the decapitated head of an Iron Man suit. He attached the message, ‘Looking forward to our scene tomorrow Robert.’

7. Tom Holland is the youngest person to portray Spider-Man/Peter Parker on screen at 19 years old.

8. The filmmakers describe Bucky Barnes as a divided character, saying, “He’s not Bucky Barnes anymore, he’s not the Winter Soldier anymore; he’s something in between. There’s a part of his personality that was under mind control, and he murdered a lot of people. So he’s got a very complicated history. Who is that person? How does that character move forward?”

9. Christopher Markus and Stephen McFeely’s original idea for Captain America 3 was a vastly different and much smaller film without the other Avengers, but Kevin Feige suggested they adapt Civil War instead. Certain parts of their original idea still made into the movie, such as the emphasis on Steve and Bucky’s relationship, as well as the use of Baron Zemo as the villain.

10. When Steve and Bucky remember going on a double date in Brooklyn when they were younger, the Captain mentions Bucky’s date was a redhead named Dolores, with the nickname Dot. That description fits with one of Peggy Carter’s nemeses from Agent Carter, Dottie Underwood, also exploited as a weapon by the Soviets. 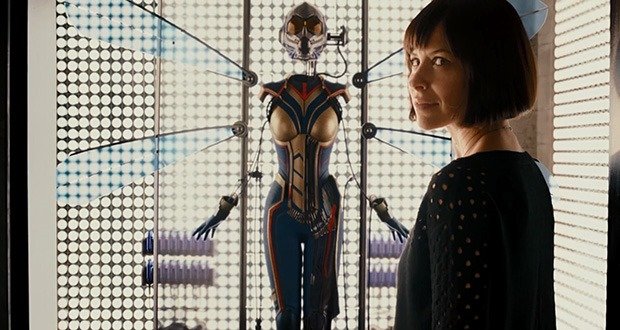 11. Hope van Dyne was going to become The Wasp in an earlier draft of the script, but she was removed due to concerns that reducing her role to a cameo alongside the other characters would be a disservice to her as a character. The fact that Evangeline Lilly was pregnant at the time also probably influenced the decision. Kevin Feige has asserted that she will officially take on the Wasp mantle in a substantial role at a later point in Phase 3, which was later revealed to be in a new project entitled Ant-Man and the Wasp (2018).

12. Chadwick Boseman underwent a vigorous training program to get in fighting shape for the character. While admittedly not a big reader of comics as a kid, Boseman read as many comics as possible for anything Black Panther-related. Boseman also visited South Africa to better incorporate cultural aspects of the country into his role.

13. The Black Panther costume is a combination of a practical costume and visual effects.

14. Spider-Man was very nearly removed from the film, as Sony Pictures originally rejected Marvel’s proposal to allow them a cut of the profit if they could pull Spider-Man over, but Sony Corporation expressed disappointment in the financial returns and the critical reception of The Amazing Spider-Man series and decided to negotiate a deal again.

15. This movie marks the beginning of Phase Three in Marvel Cinematic Universe and is the thirteenth film overall. 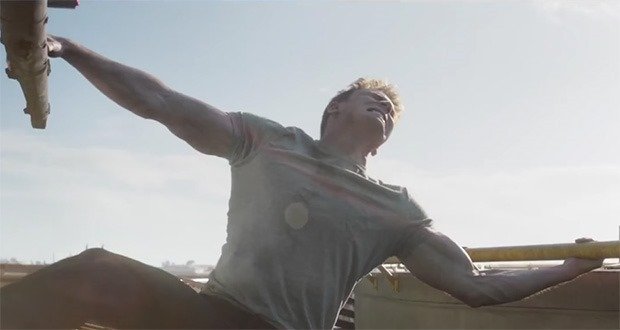 16. Chris Evans injured his arm muscles while filming the iconic shot of Captain America holding back a helicopter with his hands. Evans said of the shot, “That shot is a little bit of bicep p*rn. ‘Zoom in on the biceps’ – that’s what the script said. Kevin Feige didn’t airbrush my biceps, that’s me. It’s not a utilitarian shot, it’s a shot where you’re trying to look heroic. That position (of holding the helicopter with one hand and the ledge with another) is actually a very unnatural position to use to stop something but we used it because I have to flex my bicep, you are trying to make the scene look great. And I genuinely messed my arm doing that shot because of the strain.” Robert Downey Jr. joked that the film-makers didn’t mind that Evans hurt himself because of how great the shot turned out and they have been using it to promote the film ever since. Anthony Russo revealed that the iconic shot almost did not happen because on the day of the film-making there was a mis-communication with the costume department and Evans came in wearing a thick jacket. They immediately sent him back to change because then they wouldn’t have been able to film the shot of his muscles bulging as intended in the script.

17. Costume designer Judianna Makovsky revealed that for all of Chris Evans’s scenes where he is in civilian outfits (outside the suit), they purposefully make him wear T-Shirts which are many sizes smaller than his actual size so that his muscles pop on camera. Evans said all his T-shirt scenes are scheduled at the start of the filming because he loses a lot of weight over the months it takes to film a Marvel movie. He said specially that filming the action scenes wearing the Captain America suit makes him lose a lot of his size.

18. According to Lola VFX, the visual effects studio who have worked on all three Captain America movies, in order to create the “young Tony Stark” illusion: “Every feature of the face and body needed to be addressed in some fashion. One thing that happens to all of us is that the skin of the face gradually lowers in certain areas, and needs to be ‘lifted’ back to where it was at the age in question. But other changes are incredibly subtle, such as increase in the way light reflects off the sheen of the skin, a reduction in the appearance of tiny blood vessels under the surface of some parts of the face, or more blood flow in the cheeks giving them that familiar youthful ‘glow.’ The shot was nearly 4,000 frames long, with Tony Stark turning from one side to the other multiple times, physically interacting with other actors, and the set itself, and moving closer to the camera for a very long, uninterrupted close-up.”

19. The casting for the role of Spider-Man was down to two choices: Tom Holland and Charlie Plummer. While both of them scored good reviews in their respective screen tests, there was a split in the casting decision. Marvel, represented by producer Kevin Feige, wanted Plummer, but Sony Pictures (who owns distribution and film rights to solo Spider-Man films) co-studio chief, Amy Pascal, wanted Holland. In the end, Holland was cast as he had a slight advantage over Plummer due to the age factor. Being 17, at the time of casting (June 2015), both studios realized that Plummer is still bound by child-labor law and hence until he reaches 18, the filming schedule for Spider-Man: Homecoming involving Plummer will have to be limited to a few hours per day.

20. Spider-Man’s suit design is based on his original look in the comics when he debuted in 1962. The goggles change size to reflect Spider-Man’s expressive eyes in the comics, and also allow him to hone his senses and focus. 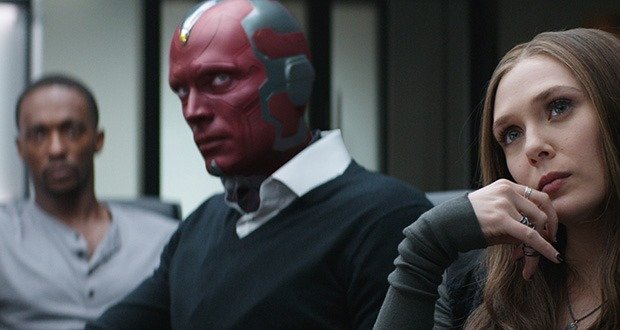 21. Costume designer Judianna Makovsky said her favorite character to design for was Paul Bettany’s Vision. She said she dressed him very stylishly, with elegant cashmere sweaters and cardigans and gave him one of the ‘dandiest accessories’ – an ascot. She said that even though it might not be visible in the movie, he’s wearing an ascot in most of his civilian scenes.

24. Tony Stark warns Captain America’s side that if they don’t surrender to Stark, some “JSOC” guys will come after them instead. This is a reference to the U.S. military’s Joint Special Operations Command. JSOC oversees elite units like the U.S. Navy’s SEAL Team Six, the U.S. Air Force’s 24th Special Tactics Squadron, and the U.S. Army’s Delta Force and 75th Ranger Regiment.

25. One of the words in the Winter Soldier’s hypnosis triggers is “Homecoming”. This may be a reference to the upcoming MCU film “Spider-Man: Homecoming”, the titular character of which was introduced to the MCU in this movie.

What it takes to get 6-Packs (Infographic)