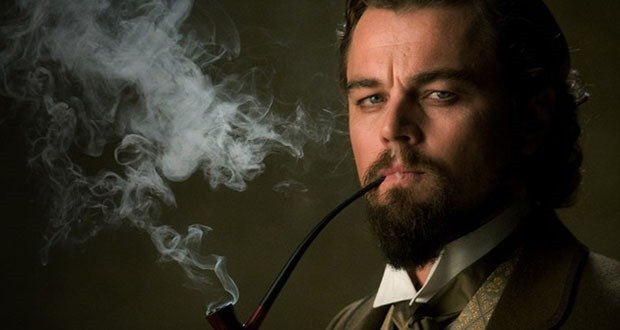 1. When Leonardo DiCaprio’s character Calvin Candie smashes his hand on the dinner table, the actor accidentally crushed a small stemmed glass with his palm and really began to bleed. DiCaprio ignored it, stayed in character, and continued with the scene. Tarantino was so impressed that he used this take in the final print, and when he called cut, the room erupted in a standing ovation. DiCaprio’s hand was bandaged and he suggested the idea of smearing blood onto the face of Kerry Washington. Tarantino and Washington both liked this, so Tarantino got some fake blood together.

2. During the filming of one of the dinner scenes, Leonardo DiCaprio had to stop the scene because he was having “a difficult time” using so many racial slurs. Samuel L. Jackson then pulled him aside telling him, “Motherfucker, this is just another Tuesday for us.”

3. When Dr. Schultz puts the dynamite in the tooth atop the wagon, he is whistling the Django theme song.

4. In an interview, Quentin Tarantino stated that originally the mandingo fight scene and the scene with the dogs were longer and more violent. He said he felt like he was going to “traumatize” the audience, so he cut both scenes down.

5. Jamie Foxx used his own horse, Cheetah, in the movie. He got it four years prior as a birthday present. 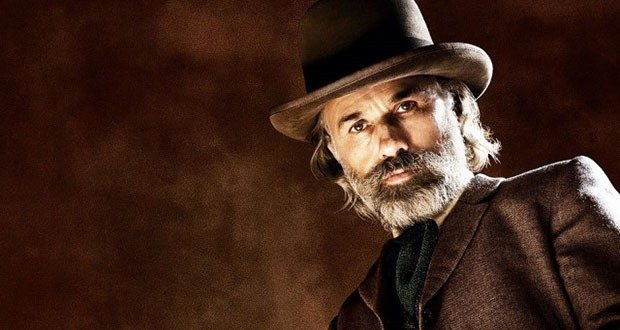 6. After an accident in training where Christoph Waltz was thrown off his horse and broke his pelvis, Jamie Foxx gave him a gift to make him feel better about riding a horse: a saddle with a seat belt.

7. Christoph Waltz alluded to the injury backstage after winning the Golden Globe, stating, “Riding a horse wasn’t much of a challenge. Falling off was.” Waltz’s injury necessitated that King Schultz’s early scenes on horseback be accommodated by a horse-drawn wagon instead.

8. Christoph Waltz turned down the role when first given the script. He felt it was too tailored to his persona. ‘Quentin Tarantino’ insisted and wouldn’t take no for an answer. Waltz agreed under one condition: his character had to be pure, and never once act in negative or evil manner. Tarantino sent him a hand written letter that simply said “Of Course, Mein Herr!- Q” Waltz sent a telegram back “Mein Herr, Of Course!- CW”

9. Leonardo DiCaprio, whose role marked the first time he played a villain since The Man in the Iron Mask (1998), was uncomfortable with how horrible and explicitly racist his character was. However, Quentin Tarantino convinced him to be as menacing as possible, saying that if he didn’t take it all the way, people would hold it against him forever.

10. According to critic Alex Ross, the alliance between Django and Dr. Schultz is “not as absurd” as audiences might believe, because in the 1840s many German revolutionaries and progressives left Europe for the U.S. where they often became active in the anti-slavery movement. 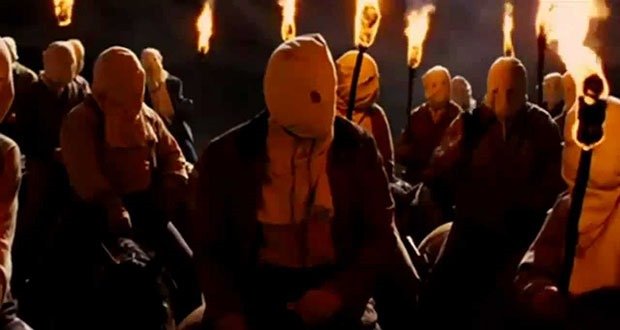 11. The men in hoods organized by Big Daddy represent a group known as “The Regulators” – spiritual forebears of the later post-civil war KKK formed in 1865.

12. Jonah Hill was supposed to play a bigger role in this film. He was originally cast to portray a character named Scotty Harmony, the son of Southern slave buyers who would purchase Broomhilda to become his lover. The entire segment was cut.

14. The white men playing poker towards the end of the film are using severed ears from slaves as their currency. 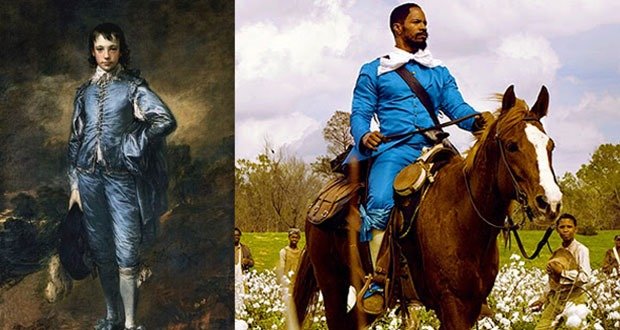 16. Django’s blue costume is based on the famous painting “The Blue Boy”. This painting inspired F.W. Murnau’s film Emerald of Death (1919) (Emerald of Death). Murnau is best known for creating the “Unchained” camera technique.

17. The name “Django” is a Romani name meaning “I awake.” It was very popular among musicians and jazz enthusiasts for having been the adopted name of Jean-Baptiste Reinhardt (1910-1953), a Romani-Belgian jazz guitarist known as Django Reinhardt.

18. Calvin (Leonardo DiCaprio) explains that via the study of Phrenology, he is able to find the three dimples on Ben’s skull, which represent submissiveness. Phrenology was an ill-fated phase of real Psychology when it was actually believed bumps on different skull locations represented different traits like creativity, athletic ability and so forth. It is considered quackery by modern medical standards.

19. Leonardo DiCaprio was injured twice, both during rehearsals. Once with a glass he smashed with his hand, the second time with a hammer that broke and hit him in the head. For filming, the hammer he handled was made of foam and the glass smashing was nothing more than a sound effect.

20. While it is known that there is a link between Dr. King Schultz and the grave of the mysterious “Paula Schultz” featured in Tarantino’s Kill Bill: Vol. 2 (2004), not much is fully understood about the connection. However, fans have theorized that Dr. Schultz was related to this Paula Schultz character, possibly as in husband and wife at some point who were separated shortly before the doctor went to pursue his career as a bounty hunter. Other theories suggest that Paula Schultz could have been Dr. Schultz’s estranged daughter or long-lost sister. Tarantino has not confirmed this, however. 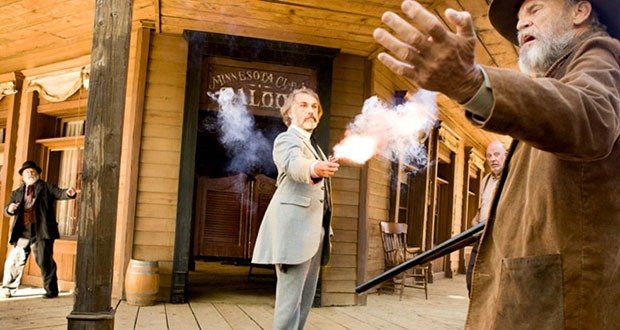 21. When Django and Dr. Schultz are in Daughtrey, Texas (near the beginning of the film), the saloon they are in is called “Minnesota Clay’s Saloon”. Minnesota Clay (1964) is the name of Western film directed by Sergio Corbucci, the same director of the original Django (1966).

24. Although the film is often considered a part of the western genre, Quentin Tarantino preferred to refer to the film as a “southern” due to the film’s setting in America’s deep south.

25. Although some viewers feel that Calvin Candie displays incestuous behavior to his sister Lara, it is not necessarily so. He is a Francophile and it is a tradition among the French to greet each other by kissing on the cheeks.

AskReaders: What’s the most ‘out of touch’ thing a company has ever done?