Here are 25 Interesting Facts About Harry Potter and the Chamber of Secrets.

1-5 Facts About Chamber of Secrets 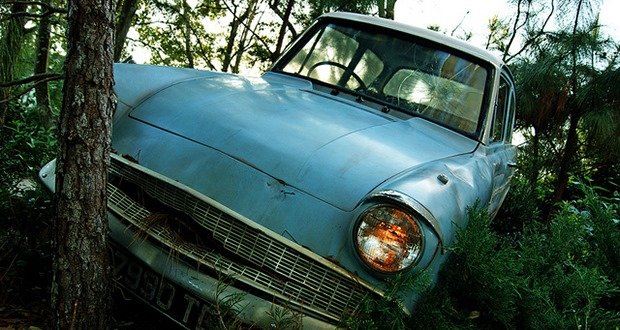 1. Fourteen Ford Anglias were destroyed to create the scene where Harry and Ron crash into the Whomping Willow.

3. The opal necklace, which plays an important role in Harry Potter and the Half-Blood Prince (2009), can briefly be glimpsed inside a display case in Borgin and Burkes’ shop in Knockturn Alley when Harry first enters.

4. The Ford Anglia is actually the same color and model car that author J.K. Rowling and her best friend from school used to ride around in when they were younger. She used the car for the book, and later the movie, out of her fond memories driving in it.

5. Rupert Grint has a very real case of severe arachnophobia, to such a degree that he has still not watched the entire scene where Aragog and the spiders appear. In that scene, the look of fright on Ron’s face and his uncomfortable squirming throughout was not from acting, but was due to Rupert being legitimately terrified.

6-10 Facts About Chamber of Secrets 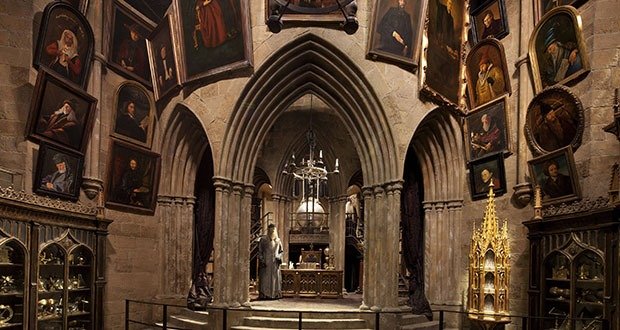 6. The set for Dumbledore’s office was, at the time of its construction, the most expensive set built for the films. Both director Chris Columbus and production designer Stuart Craig agreed that, as headmaster, Dumbledore should have the most elaborate office possible. However they were informed that the proposed design, with its massive stone columns, bookcases, curio cabinets, paintings on the walls, tables filled with various objects, antique desk and throne-like chair, and a giant telescope, would be far too expensive to produce. The producers ultimately were able to secure the funds needed to build the set.

7. When Draco Malfoy says “I didn’t know you could read” to Harry (looking like Goyle with polyjuice potion) it was actually improvised because Tom Felton forgot his line.

8. When Hagrid is escorting Harry out of Knockturn Alley, and again when Lockhart turns to show his other profile to the photographer, hardcover editions of Harry Potter books can be seen on the shelves.

9. It was Jason Isaacs’s idea to have Lucius Malfoy sport long blond hair, as well as carry a walking stick inside of which he would conceal his wand. The books make no mention of either of these things. Issacs grew attached to the walking stick and at one point tried to walk off with it, though he was caught.

10. Shirley Henderson, who played Moaning Myrtle, is the oldest actress (age 37) to portray a Hogwarts student.

11-15 Facts About Chamber of Secrets 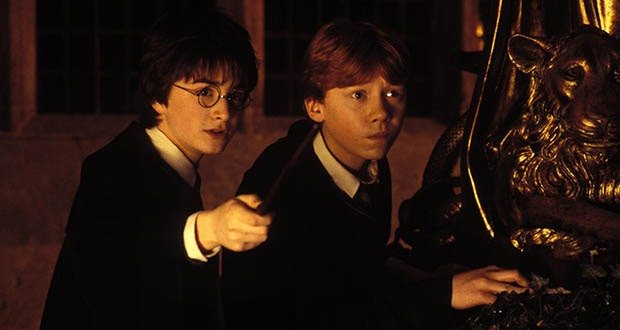 12. During production, Emma Watson frequently brought her pet hamster Millie on set. Unfortunately, Millie passed away shortly after shooting began. The set department for the film created a specially-made hamster coffin, complete with velvet lining and the name “Millie” engraved on the top. “I don’t think a hamster has ever had a better send-off.” Watson said.

13. A gag from the book is rendered incomprehensible in the film, due to lack of information. While chatting with the Grangers at the bookshop, Mr. Weasley says, “I understand that other Muggles are afraid of you.” This is because they are dentists.

14. Nurses were drafted into the production when an outbreak of head lice occurred among the young cast.

15. Director Chris Columbus instructed cinematographer Roger Pratt to bring a darker look to the film, reflecting the darker tone of the story. Hence, the sets were lit with more subdued lighting and the color palette was desaturated a bit. These changes would continue throughout the series with each film getting darker and increasingly desaturated.

16-20 Facts About Chamber of Secrets 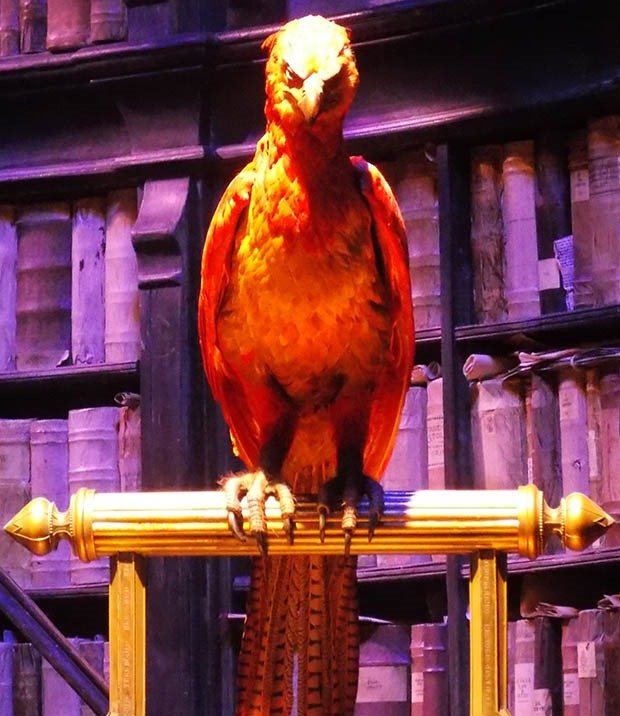 16. The animatronic Phoenix used to portray Fawkes looked so lifelike (despite the fact that Phoenixes are mythical creatures) that Richard Harris (Albus Dumbledore) thought it was a real living bird when he first saw it.

17. On an episode of ‘Have I Got News for You’ broadcast around this film’s release, the panelists discuss an article claiming that the Russian President (later Premier) Vladimir Putin was deeply disturbed and offended that Dobby the House elf seemed to have been created in his image. There is an undeniable resemblance either way.

18. The script originally said that Hermione would hug Harry and Ron in the final scene. As the then 11-year-old Emma Watson was embarrassed about having to hug the boys in front of the entire cast, Chris Columbus allowed her to change the scene so that Hermione just hugs Harry then starts to hug Ron but the two get embarrassed and resolve to only shake hands. Watson also stated in an interview that she kept letting Daniel Radcliffe go too quickly, so the film was “frozen” for a few seconds to make the hug look like it lasted longer than it actually did. Her hesitation with Ron is also taken by fans as a precursor to the relationship that will develop between the two characters.

20. When Hagrid charges into Dumbledore’s office to defend Harry, he is carrying a dead rooster in his hands. This is in reference to a scene in the book (cut from the movie) where Hagrid finds all the roosters dead. The sound of a cock-crow is fatal to a basilisk.

21-25 Facts About Chamber of Secrets 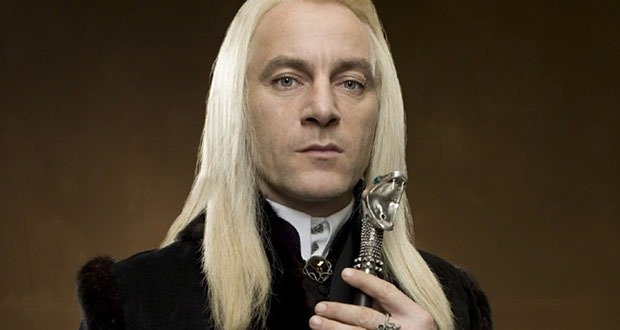 21. When Lucius Malfoy tries to curse Harry at the end, he mutters,”Avada…” As mentioned in the 4th book, this is the beginning of an Unforgivable Curse named Avada Kedavra, or the killing curse. This rather makes it look like Malfoy is stupid enough to actually try kill a child in the middle of a school chock-full of students and teachers with no means of escaping. But as Jason Isaacs has explained in several interviews, the novel mentions no specific spell for him to use and, since he had just been reading the 4th book at the time, this was the only curse he could remember.

22. In the book, the Polyjuice Potion changes a person completely, including their voice. You will note that there was no change in Mad-Eye Moody’s voice in The Goblet of Fire. Harry and Ron do not have to disguise their voices when they confront Malfoy, but instead have to be careful about the way that they talk in order to sell their identities of Crabbe and Goyle, so that Malfoy doesn’t suspect anything.

23. The filmmakers assumed that the Chamber of Secrets’ only appearance would be in this film. However, the Chamber ends up making a second appearance in Harry Potter and the Deathly Hallows: Part 2 (2011). Since the set had been dismantled it had to be constructed again.

24. When Harry sees Sir Nicholas with his head chopped off and gets in trouble by Mr. Filch, professor McGonagall takes Harry to Dumbledore’s office. When they arrive at the stairs, McGonagall says “Sherbet Lemon” to open the stairs. Sherbet Lemon is Dumbledore’s favorite candy which he says in Harry Potter and the Philosopher’s Stone (2001).

25. During the filming of the scene where Crabbe and Goyle eat the floating cupcakes, Jamie Waylett and Josh Herdman both cut their mouths on the hooks which were used to attach the cupcakes to the fishing line that was holding them up.