Here are 25 Interesting Facts About Harry Potter and the Deathly Hallows.

1-5 Interesting Facts About The Deathly Hallows 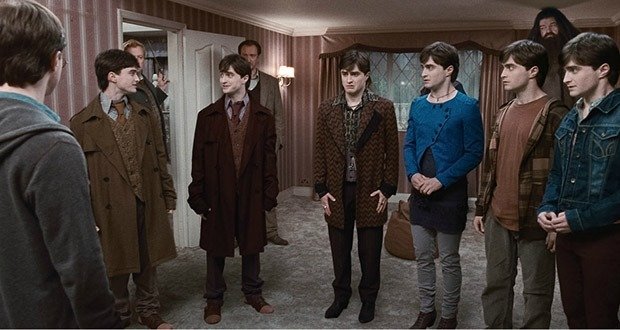 1. Filming the “Seven Harrys” scene was so complex that Daniel Radcliffe counted over 90 takes for just a single shot.

2. As in her previous films, Evanna Lynch designed a lot for her Luna Lovegood character, including what she wore, jewelry and things for the Lovegood’s home. She even came up with their dance moves for the wedding scene, which she based on the concept of ‘wafting wrackspurts away’ (which is how it’s said to have looked to Harry in the novel).

3. In the opening of the film, when Hermione is called down to tea, we can hear her parents talking about Australia along with an announcer, presumably on the TV, taking about a country-side. This is a reference to the book, in which Hermione says she not only wiped herself from her parents memories, but gave them new identities and made them think that they’d love nothing more than to move to Australia, which we presume that they do.

4. Upon seeing the set for Hermione’s bedroom, Emma Watson told the set decorators that there should be more books, which they happily accommodated.

5. Over 500 wands were created for the film. They were checked out and checked in before, during, and after the filming day is completed. Many came back broken.

6-10 Interesting Facts About The Deathly Hallows 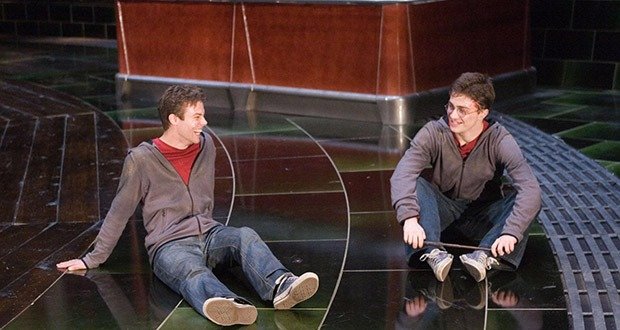 6. David Holmes, 25, Daniel Radcliffe’s stunt-double, was seriously injured on the set at Leavesden Studios, near Watford, Hertfordshire. He was performing an aerial sequence when he fell to the ground following an explosion, which was part of the stunt, and sustained a serious back injury.

7. The main street set in Godric’s Hollow is the same set used for the Hogsmeade set in Harry Potter and the Prisoner of Azkaban (2004), albeit with some set dressing changes.

8. Harry Melling (Dudley Dursley) had lost so much weight during his one-year hiatus from the Harry Potter films, that he had to wear special face prosthetics in this film. It took the make-up department nearly 6 months to create his prosthetics that would look realistic enough when viewed close up, but in the end nearly all of his scenes still ended on the cutting room floor.

9. In every shot in which Voldemort and Bellatrix Lestrange appear together, she always moves so that she stands on his right, traditionally the position of the most loyal and trusted follower.

10. The fight between McGonagall and Snape was considered to be changed into Potter against Snape instead. The idea was scrapped by J.K. Rowling, who insisted that the duel should involve the same characters as them in the novel, as she saw it as a key moment for Maggie Smith’s character.

11-15 Interesting Facts About The Deathly Hallows 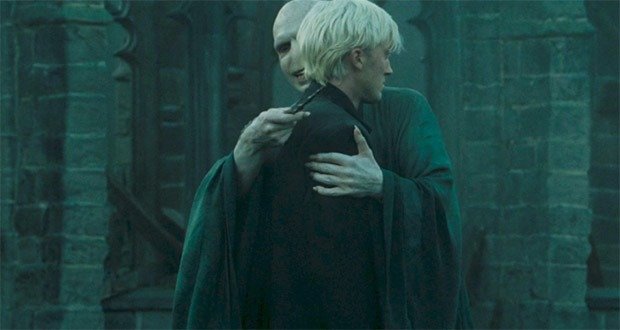 11. According to Tom Felton, Voldemort awkwardly hugging Draco was not scripted but an improvisation by Ralph Fiennes. Felton’s reactions of stopping dead in his tracks not knowing what to do is genuine.

12. When Harry goes into the Room of Requirement, in the bottom left hand corner there is the knight that Ron rides from Harry Potter and the Philosopher’s Stone (2001). Also present are the Cornish Pixies set loose by Gilderoy Lockhart in Harry Potter and the Chamber of Secrets (2002). The set is actually made entirely out of props from all the flims, around 72 containers of props to be exact.

13. Harry’s lightning bolt scar was applied by make-up teams approximately 5,800 times by the end of the series. Daniel Radcliffe had the scar applied 2,000 times while the rest were applied to stunt doubles and stand-ins.

14. Every wand seen in any film in the franchise was created on-site. Taking the lead from descriptions in the books, each wand was 13-15 inches long and created specifically for each character. No two wands were alike.

15. Most of the events in this film – from the raid on Gringotts to the Battle of Hogwarts – take place over the course of a single day.

16-20 Interesting Facts About The Deathly Hallows 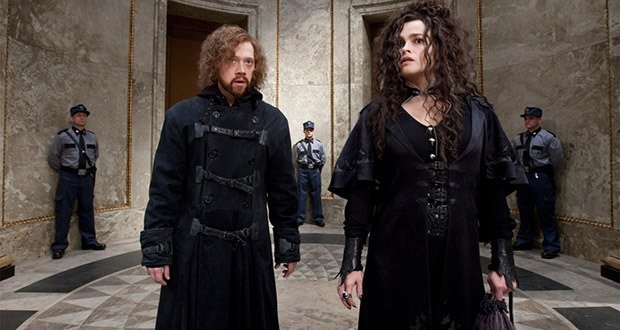 16. When the trio enters Gringotts near the beginning, Hermione has taken Polyjuice Potion to disguise herself as Bellatrix. Before the scene was shot, Emma Watson acted out the scene for Helena Bonham Carter so she would know how to act as if she were Hermione in this situation. So, essentially, this scene is Carter acting like Watson who is acting like Hermione acting like Bellatrix.

17. In total, Daniel Radcliffe went through 160 pairs of prop glasses by the end of the series.

19. Rupert Grint and Emma Watson stated in an interview that they both had casts made of their buttocks (“bum casts”) which were used to make the bicycle-like seats mounted on the broomsticks in order to make them more comfortable to ride.

21-25 Interesting Facts About The Deathly Hallows 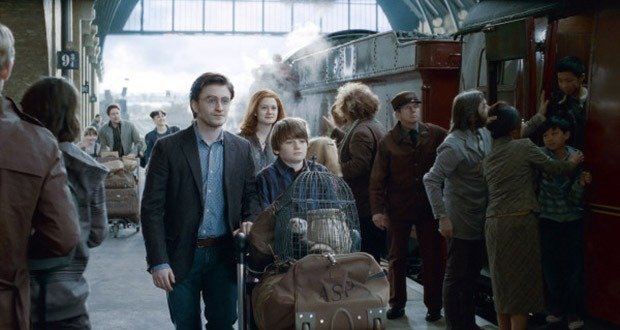 21. As the train with the next generation of children on board leaves Kings Cross Station at the end of the final scene of Harry Potter and the Deathly Hallows: Part 2 heading towards Hogwarts, the song playing over the scene is the same one as the last scene in Harry Potter and the Philosopher’s Stone (2001) where Harry waves Goodbye to Hagrid and leaves on the train to head home from Hogwarts. The song is titled “Leaving Hogwarts”. Officially ending the series of the movie besides Hedwig’s theme.

22. For this final film the model of Hogwarts was created digitally, as opposed to the physical miniature scale model used in the previous films.

23. It was reported that a huge blaze wrecked the Hogwarts set after a battle scene went spectacularly wrong. According to the report, explosives used in action sequences set light to scenery for the wizardry school, and that firefighters battled for 40 minutes to bring the flames under control but the set – centerpiece for the films Battle of Hogwarts climax – was left badly damaged. It was later confirmed that the fire was greatly exaggerated, and that the set that had been damaged was going to need be rebuilt anyway for use in another scene. Some actors were still filming at the studio but none of the movie’s biggest stars – Daniel Radcliffe (Harry), Emma Watson (Hermione) or Rupert Grint (Ron Weasley) – were involved. No one was injured.

24. The House of Black is one of the largest wizard families in the wizard world. Although it is “extinct in the male line,” meaning that essentially nobody bears the surname anymore, many characters in the film are connected to that family. Sirius Black (Gary Oldman) returns for one scene. Two of his cousins are Bellatrix Black Lestrange (Helena Bonham Carter) and her sister, Narcissa Black Malfoy (Helen McCrory), and thus, by extension, Draco Malfoy (Tom Felton) as well. Nymphadora Tonks (Natalia Tena) is the daughter of Andromeda Black. A Calidorra Black married Harfang Longbottom, grandfather of Neville Longbottom (Matthew Lewis). Dorea Black married Charles Potter, making James (Adrian Rawlins) and Harry (Daniel Radcliffe) members of that family as well. Cedrella Black married Septimus Weasley, making the entire Weasley clan related to the Blacks as well.

AskUs: Sleep Apnea and how it can lead to death?