Here are 25 Interesting Facts About Harry Potter and the Goblet of Fire (2005). 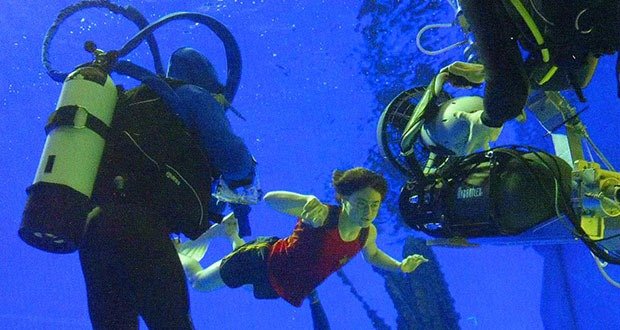 1. The underwater scenes were shot in a huge purpose-built tank with a blue-screen background. Safety divers swam in between takes with scuba regulators to allow the actors to breathe without having to surface. Daniel Radcliffe alone logged around 41 hours 38 minutes underwater during the course of filming. At one point during training he inadvertently signaled that he was drowning, sending the crew into a huge panic to bring him back up to surface.

2. During the course of filming Daniel Radcliffe matured a lot physically. In an interview, director Mike Newell remarked “I’ve just been working on a scene which we shot in our first week, and Dan still looks like the little kid that he was in Sorcerer’s Stone. Now, 11 months later, he doesn’t look like that at all.”

3. Director Mike Newell decided against the studio’s original idea of adapting the extremely long book into two separate films to be released several months apart, figuring that he could cut enough of the book’s bulky subplots to make a workable film. It was Alfonso Cuarón, the director of Harry Potter and the Prisoner of Azkaban (2004), who convinced him.

4. Stanislav Ianevski, who plays Viktor Krum, has only two lines, totalling 20 words, in the entire film.

5. At least one full-scale dragon was constructed on set, which could even blow real fire. The dragon was created partially from the basilisk puppet seen in Harry Potter and the Chamber of Secrets (2002). 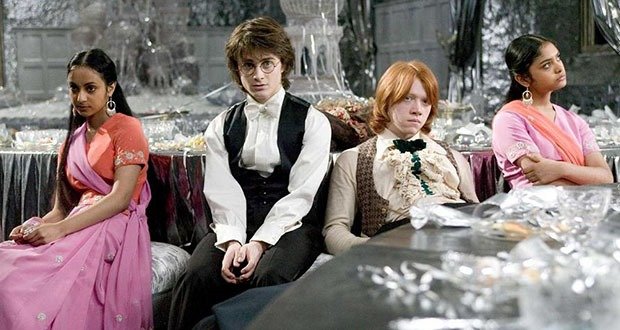 6. In the books, Parvati Patil of Gryffindor has an identical twin Padma Patil of Ravenclaw, to illustrate the unpredictability of the Sorting Hat. In the films, however, Parvati (Shefali Chowdhury) and Padma (Afshan Azad) are not only both in Gryffindor but are played, surprisingly, by unrelated actresses.

7. The kids had around three weeks of dancing practice for the Yule-ball waltz. Daniel Radcliffe, however, appears in almost every scene of the entire film, and thus had only four days to prepare for this task. In several interviews he’s given that reason for why his dancing is shown mainly from the waist up (to avoid showing his fumbling feet!). Fortunately this wasn’t a huge issue, as Harry wasn’t supposed to be a brilliant dancer anyway.

8. The elves Dobby and Winky were cut due to time constraints. However, if you watch carefully in the first campsite scene, right after Ginny points to something and says “Look!” you can see two House Elves riding on llamas. They go by very fast, so they’re hard to see.

9. This is the first film of the series to not open with a “Harry-centric” scene. Staying true to the book, it opens with The Riddle House, a “Voldemort-centric” scene.

10. Icelandic moviegoers (particularly the younger crowd) tended to crack up unexpectedly in theaters when Rita Skeeter first introduces herself. Apparently the audience weren’t expecting the pronunciation of her last name, Skeeter, to sound so close to the Icelandic verb “skíta”, which happens to be a rather crude word for defecating. 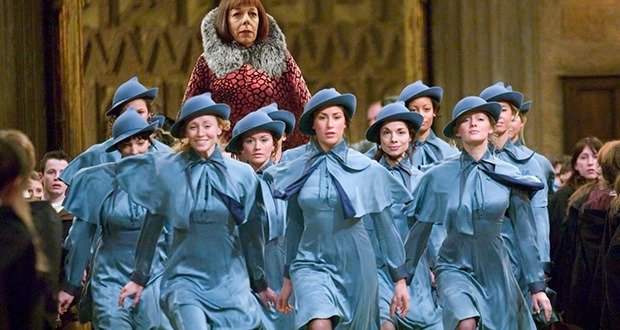 11. In the movie the audience is given the impression that Beauxbatons is an all-girls magical academy whereas, Durmstrang is an all-boys one. In the books however both schools are co-ed, and in fact in the books the Patil twins leave Harry and Ron to spend time with boys from Beauxbatons.

12. Early drafts had Ron’s estranged brother Percy appearing in a key supporting role but it was written out in the final drafts. In an interview, Chris Rankin, who plays Percy, revealed that his contract of the franchise stipulates that he must appear in four films; the first three, with the option of appearing in either this movie or the next one, Harry Potter and the Order of the Phoenix (2007). Given the fact that Percy appears much longer in the latter, he opted out of the film in favor of appearing in the next one.

15. In the scene with Dumbledore, Harry and the Pensieve, pay close attention to the glass cabinet Dumbledore approaches while explaining the Pensieve. In the top left corner is a 3D model of what becomes an important symbol in the final novel, Harry Potter and the Deathly Hallows. 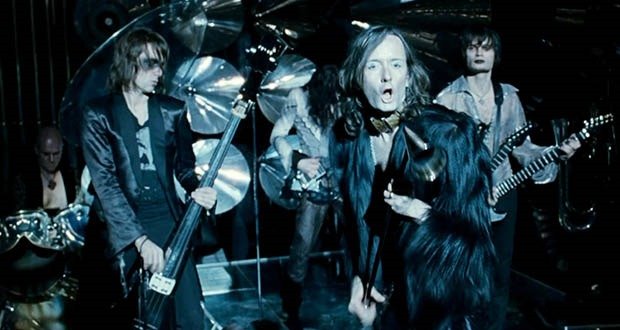 16. Scottish band Franz Ferdinand was the first choice to perform as the Weird Sisters but they declined. Due to the similarities in name, the Canadian band Wyrd Sisters attempted to stop the film’s release in Canada by filing a lawsuit, but were unsuccessful.

17. A digital “spot removing” technique (which had previously been used for such TV shows as Desperate Housewives (2004)) was applied in post-production to clear up some of the more severe teen skin problems, since make-up tested poorly for close-up shots in particular.

18. In the book, Voldemort is described as having red eyes with slits for pupils. The filmmakers ultimately decided not to give Voldemort red eyes because they felt that one wouldn’t be able to read the emotion in the eyes if they were modified, and therefore the character wouldn’t be scary enough. If you look closely during his final reformation stages, he opens his eyes just before it’s fully completed, and very briefly his pupils are indeed like slits rather than human pupils.

19. As Ron, Harry and Hermione are talking in the great hall, before George and Fred attempt to enter their names in the Goblet, Hermione is reading a book. We can’t see the title, but the cover features the harlequin pattern of the UK editions of the Harry Potter novels.

20. When he first signed on to direct, Mike Newell explained to producer David Heyman that he wanted to make a “Bollywood film”. While this had him a little skeptical at first, Heyman understood what he meant. “There is no singing and dancing, but of all the films, Goblet of Fire has the most colors,” Heyman said. “There’s teenage romance, the glamorous Yule Ball, the theatrical Quidditch World Cup, and the spectacular Triwizard Tournament.” 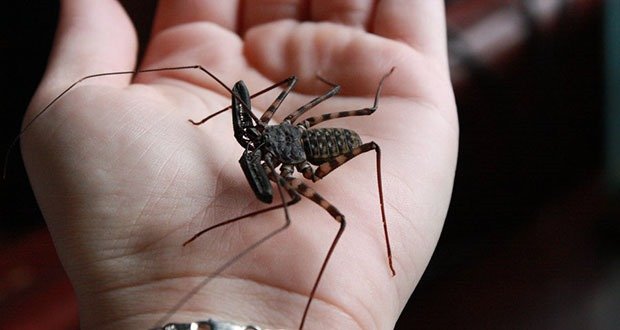 21. The creature Mad-Eye Moody torments in his “dark arts” class (a spider in the book and the original script) is virtually identical to a real animal: the tailless whip-scorpion. Tailless whip-scorpions, of which some 130 species are known, fall in their own taxonomic order ‘Amblypygi’ under Class ‘Arachnida’, and are neither scorpions or spiders. Though Moody avers that this one is deadly, real Amblypygids are quite harmless (though almost as big).

22. This is the first movie to not show the Dursleys. They feature in the book in the very beginning, where they are visited by the Weasley family who come to pick up Harry for the Quidditch World Cup. This was omitted from the movie to save screen time for the main plot.

23. Daniel Radcliffe arguably looks more like the book version of Harry Potter in this film as his hair in the film is the longest and messiest in the entire series. In the book series Harry Potter is said to have long and messy hair.

24. In the novel, Hermione uses the Sleekeazy’s Hair Potion, a hair care potion, to straighten her hair for Yulle Ball. J.K. Rowling would later reveal on Pottermore, as part of the Potter family background, that this potion was invented by Fleamont Potter, paternal grandfather of the title character, Harry Potter.

25. In the movie the Weasleys have really high seats at the Quidditch World Cup. The Malfoys make fun of them for being so high up in the “nosebleed section.” In the book however the Weasleys have just as good as or even better seats than the Malfoys. The tickets were given to Arthur Weasley by Ludo Bagman at the Ministry of Magic, whose character is cut out of this movie due to time. Ludo’s character is also a degenerate gambler, and throughout the book tries to help Harry cheat in the Triwizard tournament; Harry refuses his help.

AskReaders: What's a statistically proven fact that nobody wants to hear?

Advice: What to do if you’re stopped by the police, immigration agents or FBI