Here are 25 Interesting Facts About Harry Potter and the Order of the Phoenix (2007).

1-5 Interesting Facts About Order of the Phoenix 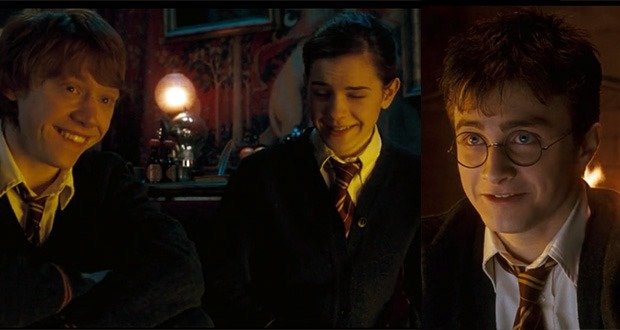 1. In the scene where Harry, Ron, and Hermione are discussing Harry’s kiss with Cho, the three begin to crack up near the end of the scene. This was all real laughter from the three actors. The director thought it was good for the scene and kept rolling.

2. During filming, Alan Rickman banned Matthew Lewis (Neville Longbottom) and Rupert Grint (Ron Weasley) from being within 5 meters of his new BMW, because during the making of Harry Potter and the Goblet of Fire (2005), they spilled milkshake in his car.

3. J.K. Rowling provided over 70 names for the Black family tree tapestry, complete with details of relations between each and every member, whose were to be scorched and so on.

4. Several members of the Black family are named after astronomical objects. You can see some of the names in the scene when Sirius and Harry are in the family tree room. Sirius, Regulus, Andromeda, Arcturus, Bellatrix, and Cygnus are the ones that can be seen.

5. Katie Leung (Cho Chang) was nervous about kissing Daniel Radcliffe onscreen, and spent several weeks preparing herself for it. On the planned day for the shooting of the scene, Radcliffe came down with an illness, and filming had to be postponed while he recovered.

6-10 Interesting Facts About Order of the Phoenix 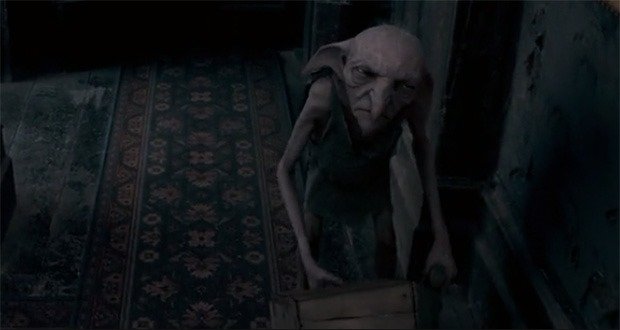 6. According to the original script, the character of Kreacher was not intended to be in this film at all. But after J.K. Rowling read the script, she more or less insisted on him needing to be there to avoid some serious problems with future installments of the series. Though Kreacher has no noticeable impact on the plot or story as it’s presented in the film, a couple of scenes with him were added at the last minute based on this request.

7. Helen McCrory was originally cast as Bellatrix Lestrange, but due to pregnancy she had to be replaced by Helena Bonham Carter. McCrory was later cast as Narcissa Malfoy, who is Bellatrix’s sister, in Harry Potter and the Half-Blood Prince (2009).

8. Since this film would include wand dueling at an elite level, a specific “wand choreographer” (Paul Harris, who is actually a professional dance choreographer) was brought in to design the style and technique of this highly unorthodox way of fighting. The result consists of five basic spell-casting moves, which each of the actors were then allowed to adapt slightly to fit their own character. So, for instance, Lucius Malfoy would have a very formal and somewhat ‘stiff’ fighting style, while Sirius Black uses a snappy and more spontaneous ‘street fight’ style.

9. Dumbledore’s line “Don’t fight him, Harry, you can’t win” was featured prominently in just about every trailer and TV-spot, yet it is nowhere in the final version of the film, nor in the DVD’s extended scenes.

10. During the breakfast scene in the Great Hall, boxes of cereal can be seen with the names Cheeri-Owls and Pixie-Puffs, with color schemes similar to those of Cheerios and Sugar Puffs boxes, respectively.

11-15 Interesting Facts About Order of the Phoenix 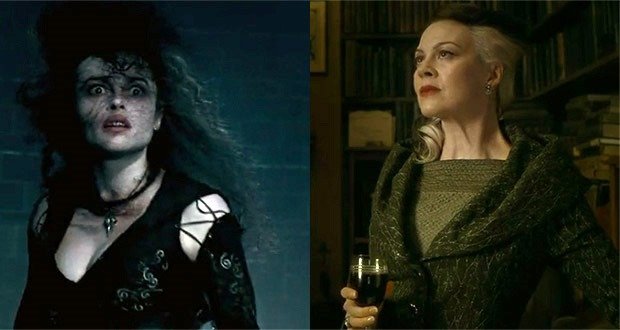 11. This film reveals several characters to be related to Sirius Black, most notably his cousin Bellatrix Lestrange, whose sister (Narcissa) is Draco Malfoy’s mother. One connection that is not mentioned in this film is that Nymphadora Tonks is family as well (first cousin, once removed), as her mother (Andromeda) is sister to both Bellatrix Lestrange and Narcissa Malfoy. Andromeda’s name can be seen on the tapestry in Sirius’ house, but her portrait has been burned off; the book explains that her family disowned her for marrying a Muggle-born wizard. Tonks’ name is also on the tapestry, but doesn’t feature as prominently, so one has to really look for it.

12. Emma Watson was seriously thinking whether or not to keep acting in the film franchise after this installment, but decided to stay after considering that it would be uncomfortable to watch the films being made with someone else as Hermione.

13. Though not seen in the movie, the code to enter the Ministry of Magic from the street is 62442, which spells out the word MAGIC.

15. During filming of the stand-off scene in the Ministry of Magic, Matthew Lewis (Neville Longbottom) suffered a perforated eardrum after accidentally moving his head while Helena Bonham Carter had her wand in his ear “..as a sort of Q-Tip…[to] sort of torture [his ear]” Carter said. Lewis was deaf in that ear for a few days afterward, though he laughed about the incident in interviews.

16-20 Interesting Facts About Order of the Phoenix 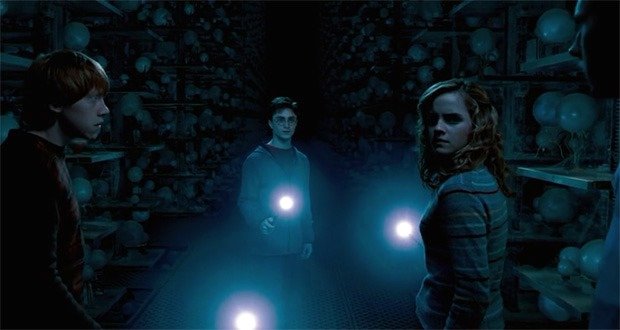 16. The Department of Mysteries was the first completely computer-generated set used in the series. Building the set practically was too expensive since an estimated 15000 crystal balls would have been needed, and it would have taken a lot of time to clean and set them up again between takes.

18. J.K. Rowling had been a schoolteacher before writing the Potter books, and this film features some references to the British educational system. In the late 1980s and early 1990s, students at age 16 were given Ordinary Level (O-Level) exams in all their major subjects, for which they can receive their General Certificate of Education. This corresponds to the Ordinary Wizarding Level (O.W.L.) exams given at Hogwarts. Students who planned to go on to university stayed on two more years to take their Advanced (A-Level) Exams, which roughly correspond to N.E.W.T. (Nastily Exhausting Wizarding Test) Exams.

19. The set used for Igor Karkaroff’s trial scene in Harry Potter and the Goblet of Fire (2005) was doubled in size for Harry’s trial in this film, while still protecting its symmetry.

20. Since Alastor Moody (Brendan Gleeson) has a prosthetic leg, he could not balance properly on broomstick, being unable to use the stirrups. Instead, his broom has posts at the front where he rests his legs, a seat which allows him to lean backwards, and a control stick for his hands. The arrangement is very similar to automobiles made for double-amputees, which have hand controls instead of pedals.

21-25 Interesting Facts About Order of the Phoenix 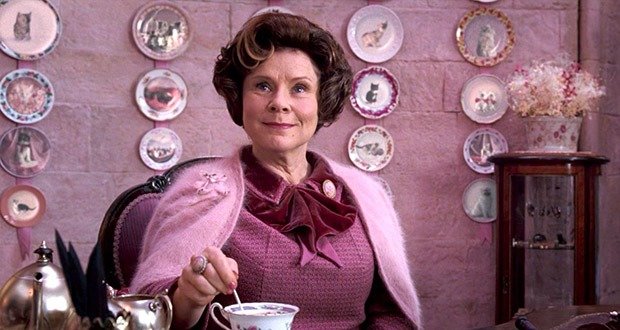 21. Author J.K. Rowling revealed that the character of Dolores Umbridge was based on a real person whom she “disliked intensely on sight”, and whom “returned [her] antipathy with interest”, even though she honestly could not explain why they hated each other so much.

22. Over 30,000 individually placed tiles were used to create the Ministry of Magic sets. As real ceramic tiles would have been far too expensive to produce, they were instead made out of heavily-painted cardboard.

23. In the original outline for the novel, the character of Arthur Weasley was to be killed off by Voldemort to entice Harry to the Department of Mysteries. J.K. Rowling couldn’t go through with killing off such a beloved character, so Weasley was allowed to survive, albeit gravely injured. Interestingly, Arthur Weasley was again considered to be killed off in the final novel (later adapted as Harry Potter and the Deathly Hallows: Part 2 (2011)), but Rowling again changed her mind.

24. Many fans were critical of the scene where Harry sees Voldemort at the train station dressed in a Muggle suit, saying it was out of character for Voldemort to do such a thing. Director David Yates and producer David Heyman both defended the scene, though each had different takes on it. Yates explained that it was Voldemort’s way of taunting Harry, that Voldemort could appear in plain sight in a crowd of Muggles who would not realize how dangerous he is. Heyman, on the other hand, said that it’s a figment of Harry’s imagination, symbolizing Voldemort taking control of Harry’s mind.

25. When Dumbledore’s Army first meets at the Hog’s Head Inn, there is a bartender accompanied by a goat, played by Jim McManus, and credited as “Barman.” This character is later identified as Aberforth Dumbledore, the Professor’s younger brother. This character returns in Harry Potter and the Deathly Hallows: Part 2 (2011), and is played by Ciarán Hinds.

AskUs: How do we calculate the number of bees and know that their population is declining?