Here are 25 Interesting Facts About Harry Potter and the Philosopher’s Stone.

1-5 Interesting Facts About the Philosopher’s Stone 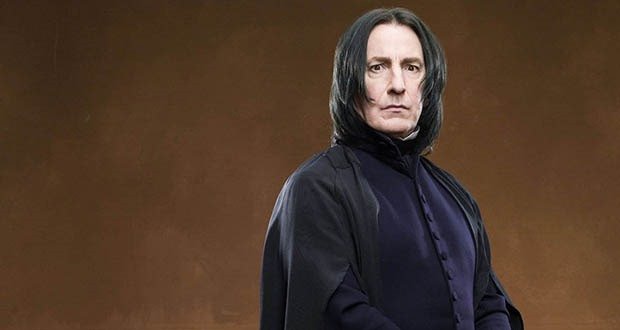 1. Alan Rickman was hand-picked to play Snape by J.K. Rowling, and received special instruction from her as to his character. Rowling even provided the actor with vital details of Snape’s back story not revealed until the final novel.

2. Warner Bros. originally considered making the entire “Harry Potter” series as a set of CGI animated films, or attempting to combine several of the novels into a single movie. The studio’s reasoning mainly had to do with concern over the rapid aging of child actors-if production ran too long on any of the films, or if production was delayed between sequels, the leading actors might have to be recast. Author J.K. Rowling vetoed both the ideas of combining books and an animated film, so the studio decided instead to produce all seven (later eight) films back to back so the same child actors could play their roles in every film.

3. The child actors in Harry Potter would do their actual schoolwork in the movie to make the school setting more real.

4. The Restricted Section scene was filmed in the Duke Humfrey’s building at the Bodleian Library in Oxford. They have very strict rules about not bringing flames into the library. The makers of Harry Potter were the first ever to be allowed to break this rule in hundreds of years.

5. The scenes at Hagrid’s Hut were filmed on location, albeit in a small patch of land in London not far from Leavesden Studios. The hut was demolished when the shoot wrapped in case fans of the film swamped it.

6-10 Interesting Facts About the Philosopher’s Stone 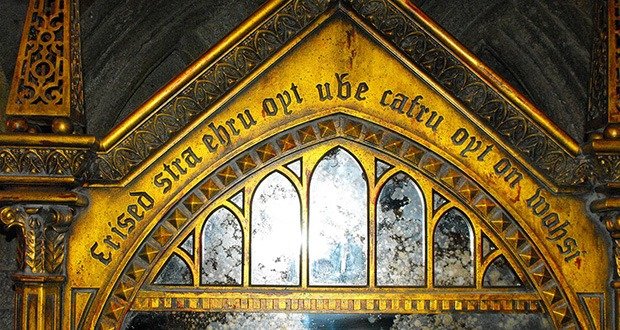 6. The inscription around the Mirror of Erised says: “Erised stra ehru oyt ube cafru oyt on wohsi”. Reading the inscription backwards it says, “I show not your face but your heart’s desire.”

8. The filmmakers originally wanted to use Canterbury Cathedral as a filming location for some of the Hogwarts scenes, but the Dean of Canterbury refused to allow it, saying that it was unfitting for a Christian church to be used to promote pagan imagery. Gloucester Cathedral agreed to take its place; the Dean of Gloucester, the Very Reverend Nicholas Bury, admitted to being a fan of the books. Nonetheless there was a huge media outcry in Gloucester when it was decided to use the local Cathedral as a filming location. Protesters wrote letters by the sack-load to local newspapers, claiming it was blasphemy and promising to block the film-crew’s access. In the end, only one protester turned up.

9. Platform 9 3/4 was filmed at King’s Cross, but on platforms 4 and 5. J.K. Rowling has admitted that she mixed up the layout of London’s King’s Cross railway station when she assigned the Hogwarts Express to platform 9 3/4, reached by using magic between platforms 9 and 10. She meant the location to be in the inter-city part of the station, but 9 and 10 are actually among the rather less grand suburban platforms. The movie conformed to the book: the platforms seen as 9 and 10 are in real life inter-city platforms 4 and 5. However, there is, in fact a “Platform 9 3/4” at King’s Cross. It’s located in the walkway area between the real platforms 9 and 10, as a treat for fans of Harry Potter.

10. The filmmakers attempted to go the extra mile of matching the kid’s appearances to how the novel describes them, by fitting Daniel Radcliffe (Harry Potter) with green-colored contact lenses, and similarly make Emma Watson (Hermione Granger) wear fake buck teeth. But when Dan’s eyes reacted strongly to the contacts, and Emma couldn’t talk clearly with the fake teeth in her mouth, these ideas were dropped.

11-15 Interesting Facts About the Philosopher’s Stone 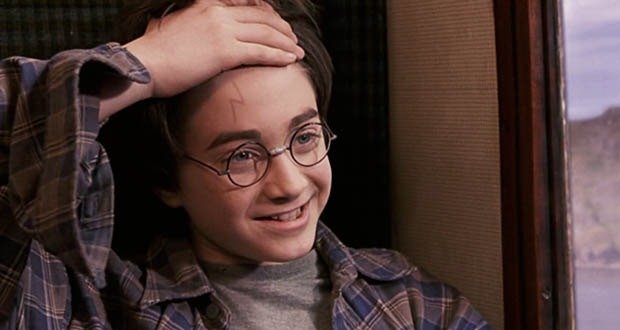 11. In the film, the scar on Harry’s forehead is off-center. This was done at J.K. Rowling’s request. Due to the artwork on the covers of her books, many people have assumed that his scar is supposed to be in the center of his forehead. The books, however, never specify exactly where on his forehead the scar is located.

12. Author J.K. Rowling revealed on her website that she was considered to play Lily Potter during the Mirror of Erised scene, but she turned down the role, which instead went to Geraldine Somerville.

13. Director Chris Columbus has stated in interviews that he is unhappy with the visual effects in this film, saying that they were “rushed” and “never up to anyone’s standards,” and sought to improve them for the following film. This did not, however, prevent the film from being nominated for a BAFTA award for “Best Visual Effects.”

14. At the time this film was in production, only four of the eventual seven books in the series had been published. J.K. Rowling was retained as a consultant on the film, not only to ensure consistency with the first book, but also to avoid conflicts with her vision for the later entries. It has been confirmed that at least one line of dialogue was removed from the script to avoid a contradiction with the then-unpublished “Harry Potter and the Order of the Phoenix”.

15. The movie is known as “Harry Potter and the Philosopher’s Stone” everywhere except the USA and so every scene in which the Philosopher’s Stone was mentioned was filmed twice (once with the actors saying “Philosopher’s” and once with the actors saying “Sorcerer’s”) or redubbed (notably, one of the times Hermione says it in the library, her face isn’t shown). The reason for this was to keep the films consistent with the book series: the US publisher, Scholastic, had changed the title (and corresponding text) to “Sorcerer’s Stone”. The title change was done with the consent of author ‘J.K. Rowling’, but she has since said that she regrets having granting permission, and as a fledgling author she wasn’t in a strong enough position to fight it at the time.

16-20 Interesting Facts About the Philosopher’s Stone 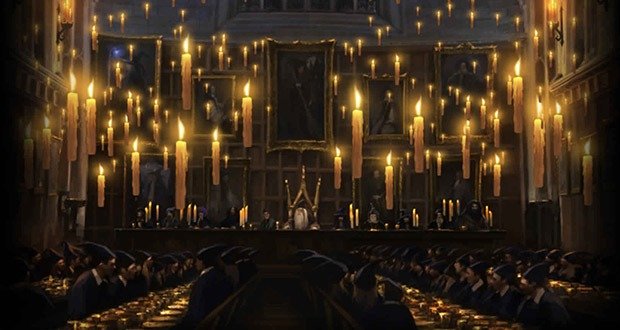 16. The floating candles in the Great Hall were created using candle-shaped holders containing oil and burning wicks and suspended from wires that moved up and down on a special effects rig to create the impression that they were floating. Eventually one of the wires snapped due to the heat of the flame causing the candle to fall to the floor. Fortunately no one was injured, but the decision was made to re-create the candles using CGI for the following films as using real candles was determined to be a safety hazard.

17. In the script, the flashbacks to Voldemort killing Harry’s parents were written by J.K. Rowling herself. The producers knew she was the only one who knew exactly what happened.

18. When holding auditions for the role of Hermione, the casting team traveled around to local British elementary schools to hold auditions in hope to find their actress. When they arrived at Emma Watson’s school, she had no desire to audition despite nearly every single girl in her school wanting to. It was encouragement from her teacher to at least attempt the audition that made her be the last girl to audition of her whole school.

19. The floor in the great hall is made of actual York stone. Production designer Stuart Craig had the foresight to invest a significant amount of his design budget on the stone. While this decision was questioned at the time, it proved to be a wise one, as the stone was durable enough to withstand the footsteps of hundreds of actors and several camera crews over the near decade it took to film the entire series.

21-25 Interesting Facts About the Philosopher’s Stone 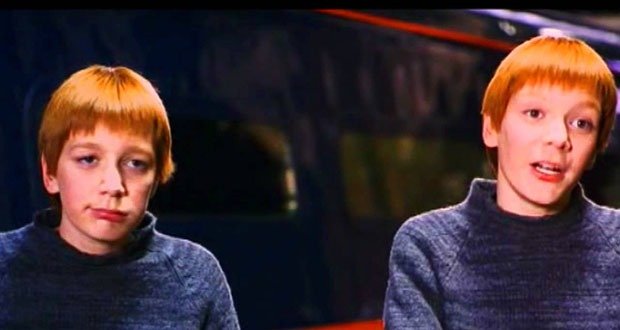 21. James Phelps and Oliver Phelps, the twin actors who play Fred and George Weasley respectively, both have naturally dark brown hair which was dyed red for their roles. Similarly, Tom Felton’s hair, which is also naturally brown, was bleached blond for his role of Draco Malfoy.

22. In this film, all the food that you see in the Great Hall feasts are real. Director Chris Columbus wanted a very elaborate welcome feast to match the description in the book, with roast beef, ham, turkey, and all the trimmings. Unfortunately filming under the hot stage lighting for hours at a time quickly caused the food to develop an unpleasant odor, despite the meat being changed every two days and the vegetables twice a day. For the following films samples of real food were frozen so that molds could be made of them and copies cast in resin.

23. Throughout the whole of the Harry Potter series, Daniel Radcliffe went through 160 pairs of glasses

24. The trouble-making poltergeist Peeves (played by Rik Mayall) does not, in the end, appear in the movie nor in deleted scenes on any home editions of the film. Mayall claimed he didn’t find out that he was cut from the final cut until he saw the movie himself. Ultimately Peeves was never used in any of the Harry Potter films.

25. Neville receives a remembrall from his grandmother but he doesn’t remember what he has forgotten. In that scene, Neville is the only student without his robe on. He must have not remembered to put his robe on.