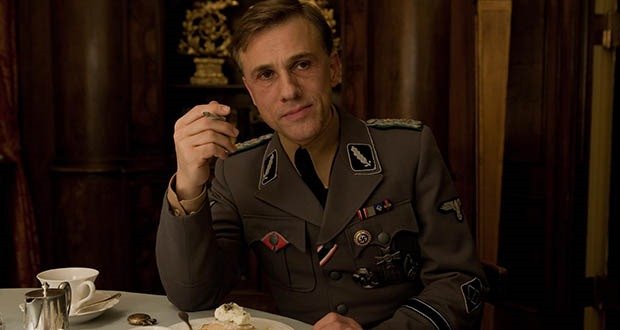 1. Quentin Tarantino was considering abandoning the film while the casting search for someone to play Colonel Hans Landa took place, fearing he’d written a role that was unplayable. After Christoph Waltz auditioned however, both Tarantino and producer Lawrence Bender agreed they had found the perfect actor for the role.

2. Roughly only 30% of the film is in spoken English, the language which dominates the film is either French or German, with a little Italian. Chapter Three of the film ‘German Night in Paris’ is completely devoid of any English. This is highly unusual for a Hollywood production.

3. One of the Jewish names carved on The Bear Jew’s bat is Anne Frank.

4. Michael Fassbender’s performance as Lt. Archie Hilcox is layered with irony due to his real life. Fassbender was born in Germany to German and Irish parents and raised in Ireland, now residing in London with fluency in German as his first language and English as his second, and a mastery of English accents and dialects. Here he plays an Englishman who goes undercover as a German, and who can speak German fluently, but cannot hide his accent.

5. Ironically, because Diane Kruger’s best known performances were in English speaking films, Quentin Tarantino thought she was an American, and doubted whether she could master the German dialogue and accent. Upon audition, she quickly proved to him that she was a native speaking German. 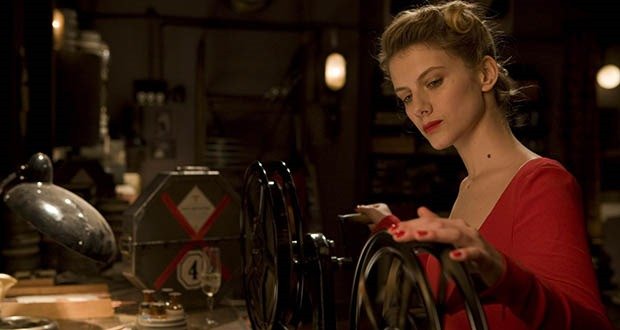 6. To prepare for her role, Mélanie Laurent worked as a film projectionist for a few weeks at New Beverly Cinema, projecting mostly cartoons and trailers before shows. The real test set by Quentin Tarantino was for her to screen Reservoir Dogs (1992).

7. When asked about the misspelled title, director Quentin Tarantino gave the following answer: “Here’s the thing. I’m never going to explain that. You do an artistic flourish like that, and to explain it would just take the piss out of it and invalidate the whole stroke in the first place.”

8. Quentin Tarantino started writing this movie before Kill Bill: Vol. 1 (2003) but could not decide on a good ending and decide to put it on hold to do “Kill Bill” with Uma Thurman, a project he had been mentally preparing since Pulp Fiction (1994).

9. The mock up posters for the propaganda film “Stolz der Nation” are historically accurate including a German censor approval stamp and they are rendered in the style of the actual film posters of that era, according to the book ‘Film Posters of the Third Reich.’

10. When Aldo Raine (Brad Pitt) is introduced, he is shown wearing the insignia for the “Black Devils” the 1st Special Service Force, composed of both Canadian and American soldiers. 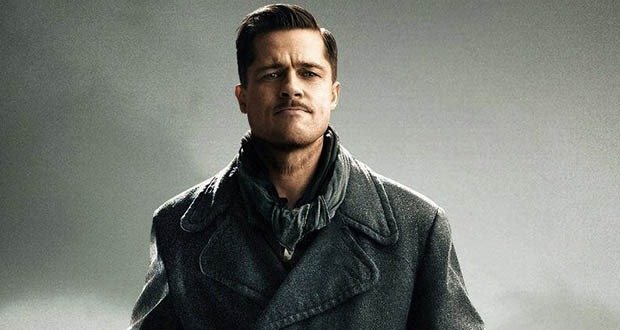 11. The scar on Aldo Raine’s neck is never explained. The script hints that Raine survived a lynching, a common punishment in the 1920s and 1930s, but otherwise, it explicitly states that the scar will never be explained.

12. In ‘Quentin Tarantino’s Universe’, the character of Lt. Aldo Raine is Floyd’s – aka The pothead on the couch from True Romance (1993) – great grandfather.

13. B.J. Novak had to take leave from appearing on The Office (2005) in order to play Pfc. Utivich. His absence on the show was explained by his character going to ‘Thailand with friends from high school’.

14. Christoph Waltz is his own voice actor in the German and French dubs of the movie.

15. Adam Sandler was originally supposed to play the “Bear Jew.” 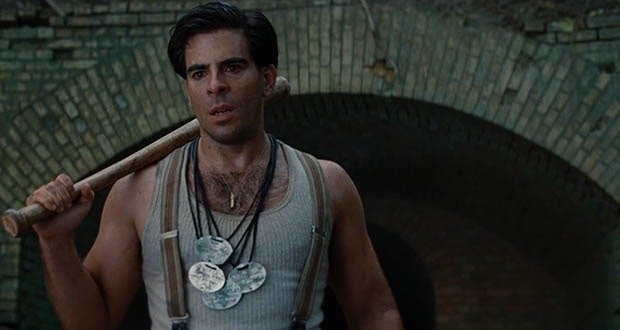 16. When asked how he got into the violent, baseball bat-wielding mindset of “The Bear Jew”, Eli Roth partially attributed his performance to the historically accurate costumes: “Being in wool underwear will make you want to kill anything.” He also stated (in a separate interview) that his girlfriend had secretly added some Hannah Montana (2006) music onto his iPod; when he listened to it, it inexplicably made him able to tap into the violent nature of The Bear Jew.

17. On German advertisement materials all swastikas were removed or covered up, as it was unclear to the distributor if the swastikas violated German law (which prohibits the exhibition of Nazi symbols except for purposes such as historical accuracy).

18. In the film, a group of German soldiers are playing a game where one has to guess what famous name is written on one’s forehead. The note on the soldier played by Ken Duken reads Mata Hari, a Dutch exotic dancer and courtesan who became known for being a double agent for Germany during World War I. This mirrors the role played by Diane Kruger: a famous actress turned double agent for the Allies during World War II.

19. Eli Roth and Omar Doom were nearly incinerated filming the fire sequence in the theater. During tests the flame temperatures reached 400 degrees Centigrade, and during the take the set burned out of control and the temperature of the ceiling above them reached 1,200 degrees Centigrade (2,000 degrees Fahrenheit.) Quentin Tarantino was seated on a crane operating the camera in a fireproof suit, and none of them wanted to back down and ruin the shot. Fire marshals said that another fifteen seconds of filming and the steel structure would have collapsed, incinerating the actors. Roth and Doom were treated for minor burns.

20. Quentin Tarantino had all of the actors playing the Basterds go through a day of “scalping training” in preparation for the movie, and told them that the three best practice scalpers would be rewarded with close-ups of them doing just that in the film. One of these moments comes in the very last scene, when Pfc. Utivich scalps Landa’s driver after Aldo shoots and kills him. 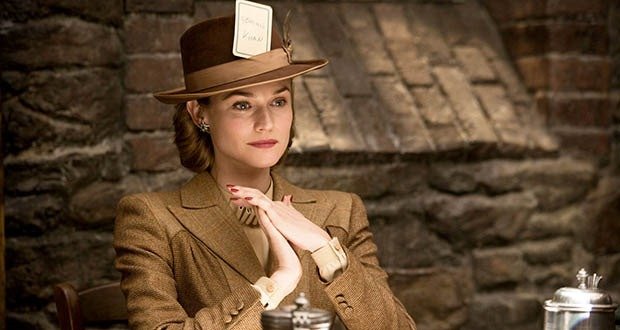 21. In the scene where Bridget von Hammersmark was choked to death after being discovered as a spy, Diane Kruger was almost accidentally really choked. Quentin Tarantino was unimpressed with choking scenes in other movies, in that actors are rarely in any considerable danger while shooting them, and convinced Kruger to be strangled for real in order to get the scene just right. Fearing that actor Christoph Waltz would choke her too much or too little, Tarantino decided to literally take matters into his own hands and did the scene himself. In an interview, Tarantino said, “What I said to her was, I’m gonna just strangle you, alright? Full on, I’m gonna cut off your air, for just a little bit of time. We’re gonna see the reaction in your face and I’m gonna yell cut.” Kruger decided this was reasonable and let Tarantino sit on top of her and choke her to the point of unconsciousness. Fortunately for Kruger, the shot was accomplished in one take.

22. Despite his reputation and being leader of the Basterds, Aldo Raine is only seen killing one person on-screen (At the end when he shoots the radio operator).

23. Quentin Tarantino continues his tradition of ripping on waiters in this film, by killing the French barmaid in the La Louisine tavern shoot-out. (Only two waiters are on screen in the film, the barmaid being the only one featured exclusively.)

24. During the final card game at the LaLouisiane tavern, the card that Hellstrom (the Gestapo major) has to identify is King Kong. King Kong (1933) was one of Adolf Hitler’s favorite movies.

25. The peculiar glove guns Donny and Omar use to breach Hitler’s box are known as Sedgley OSS .38’s. They were originally designed as a last-resort weapon for US Navy construction crews in the South Pacific.

Advice: 23 Things to look for when buying a used vehicle