Here is part 1 of the 25 Interesting  Facts About the Lord of the Rings Movie Trilogy. 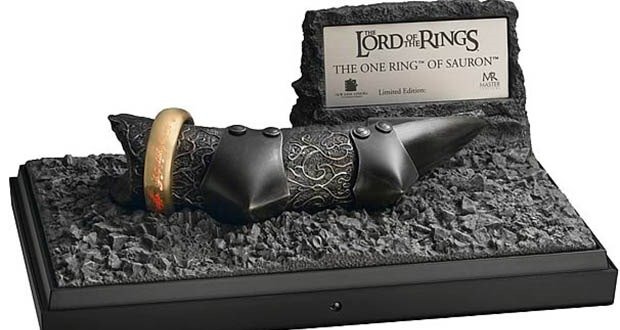 1. Peter Jackson gave one of the rings used in the movies to both Elijah Wood and Andy Serkis(Gollum) as a gift when the shoot was finished. They both thought they had the only one.

2. Gandalf’s painful encounter with a ceiling beam in Bilbo’s hobbit-hole was not in the script. Ian McKellen banged his forehead against the beam accidentally, not on purpose. Peter Jackson thought McKellen did a great job “acting through” the mistake, and so kept it in.

3. Christopher Lee read “The Lord of the Rings” once a year until his death in 2015 and had done so since the year it was published, and is the only member of the cast and crew ever to have met J.R.R. Tolkien.

4. Viggo Mortensen (Aragorn), who is trilingual in English, Spanish, and Danish, requested the script be revised to let Aragorn speak more of his lines in Elvish.

5. Viggo Mortensen chipped a tooth while filming a fight sequence. He wanted Peter Jackson to superglue it back on so he could finish his scene, but the director took him to the dentist on his lunch break, had it patched up, and returned to the set that afternoon. 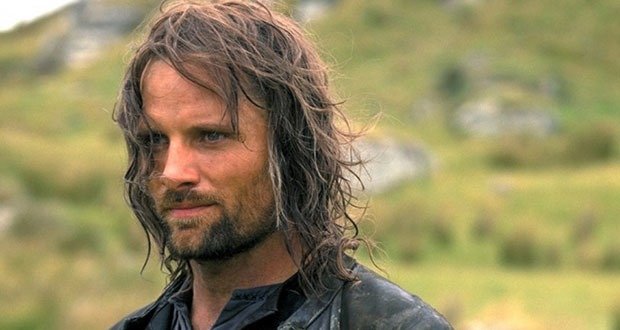 6. Viggo Mortensen did his own stunts. He also insisted on using only the real steel sword, instead of significantly lighter aluminum sword or safer rubber sword which were manufactured for battle scenes and stunts.

7. During the fight between the orc, Lurtz, and Aragorn, the moment where Lurtz takes out the dagger Aragorn had stuck it in his leg, and then Lurtz threw it at him. That was an actual dagger. It was supposed to hit the tree behind Viggo Mortensen, but because of the bad capabilities with the orcs armor, he accidentally threw it towards Viggo. Luckily, Viggo was fast enough to deflect it with his sword.

8. John Rhys-Davies, who plays Gimli the dwarf, is the tallest of the actors who play members of the Fellowship. He is 6′ 1″.

9. The cast often had to fly to remote shoot locations by helicopter. Sean Bean (Boromir) was afraid of flying and would only do it when absolutely necessary. When they were shooting the scenes of the Fellowship crossing the snowy mountains, he’d spend two hours every morning climbing from the base of the mountain to the set near the top, already dressed as Boromir. The crew being flown up could see him from their helicopters.

10. When Pippin is being hit with the apples after asking about second breakfast, it is Viggo Mortensen himself chucking the apple at his head. They had to shoot the scene 16 times to get it just right, and Billy Boyd says he believes Mortensen enjoyed himself immensely. 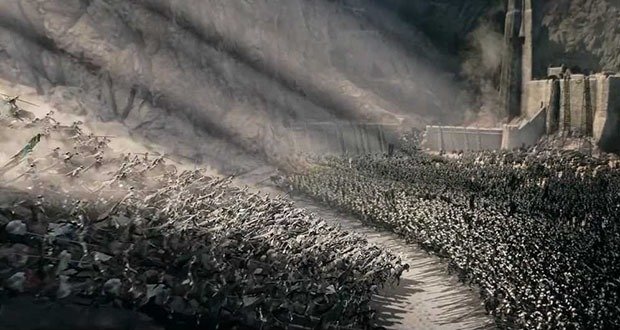 11. For high-tech tasks, a computer program called MASSIVE made armies of CG orcs, elves, and humans. These digital creations could ‘think’ and battle independently – identifying friend or foe – thanks to individual fields of vision. Peter Jackson’s team could click on one creature in a crowd scene of 20,000 and see through his “eyes.” Different species even boast unique fighting styles.

12. When Christopher Lee and J.R.R. Tolkien were in correspondence, Tolkien gave Lee his blessing to play Gandalf if there ever was a film version of Lord of the Rings. Years later, Lee campaigned for the part of Gandalf in this production, but was offered the part of Saruman instead. Lee, who wanted to participate in the project any way he could, accepted the role of Saruman.

13. When Gandalf has his big stand-off scene with the Balrog, Ian McKellen is actually acting to a green ping pong ball which was used along with the green screen technology employed during filming to give him & other cast members a reference point for some of the larger CGI characters.

14. According to Sean Astin in the extended DVD commentary, when Bilbo drops the ring before leaving Hobbiton the floor was made magnetic to prevent the ring from bouncing. This was done to demonstrate the importance and weight of the ring.

15. When the dragon firework goes off at the party, the shriek heard is Billy Boyd(Pippin) actually screaming, as he was unaware at the time that the firework was really going to explode on set (he thought that it would be put in digitally). It was not scripted, but that take ended up in the final film. 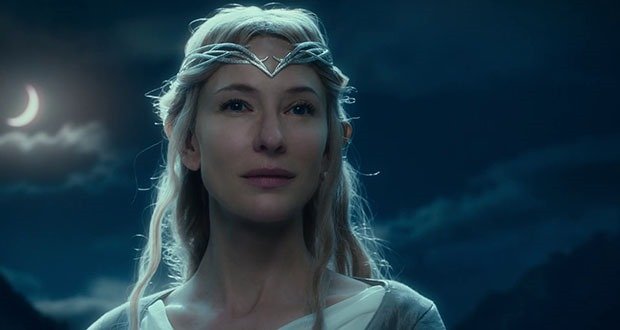 16. Originally the narration at the prologue was to be spoken by Elijah Wood, but it was felt that the information imparted had little bearing on the character of Frodo. Ian McKellen also recorded a narration but once again it was felt that Gandalf wasn’t the right character to speak it. They eventually settled on Cate Blanchett as Galadriel, as it emphasizes the timelessness of the elves.

17. Viggo Mortensen joined the film when it was already shooting, never having met Peter Jackson before, nor indeed having read the J.R.R. Tolkien books. It was Mortensen’s 11-year-old son Henry Mortensen who was the chief instigator in convincing Mortensen to sign on as Aragorn.

18. The Elvish language lines spoken in the film are not just quotes from the book, they were derived from J.R.R. Tolkien’s own limited dictionary of that language. Dialect coach Andrew Jack used actual recordings of Tolkien reading his books to guide the actors’ pronunciation.

19. Over 12.5 million plastic rings were made in order to fabricate simulated chain mail for the movie. Two crew members spent the length of the shoot linking the rings by hand into suits of armor. By the end of production, they had worn the fingerprints off their thumbs and index fingers.

20. During filming, most of the members of the Fellowship took up surfing in New Zealand in their spare time. Among them was Viggo Mortensen, who wiped out terribly one day, and bruised one whole side of his face. The next day, makeup tried to mask the bruising and swelling, but were unsuccessful. Instead, Peter Jackson opted to film Mortenson from one side for the entire scene. In the Mines of Moria when they find the tomb, Aragorn is only seen from one side in the whole scene. 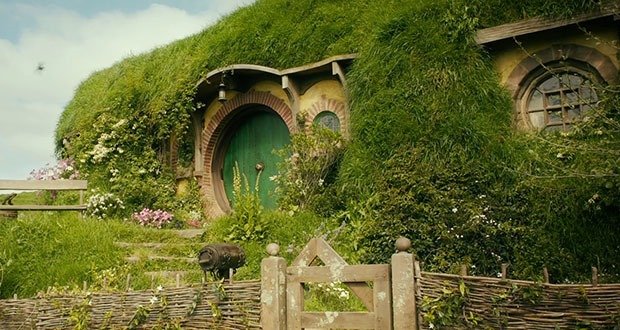 21. Two sets of Bag End, Bilbo Baggins’s home, were built. One to accommodate the Hobbits, the other 33% smaller for the full size Ian McKellen, right down to smaller versions of the books on the bookshelves.

22. It is estimated that filming of the trilogy pumped about $200,000,000 into the New Zealand economy. The New Zealand government even created a Minister for Lord of the Rings, whose remit was to exploit all the economic opportunities the films represented.

23. Boromir’s speech at the Council of Rivendell is read from a sheet of paper sitting on Sean Bean’s lap as it was only given to him the night before.

24. Eight of the nine members of the Fellowship got a small tattoo of the word “nine” spelled out in Tengwar, which is the Elvish script created by Tolkien. They got it at a tattoo parlor in Wellington, New Zealand, to commemorate the experience of the movie. The ninth member, John Rhys-Davies, declined and sent his stunt double in his place. Elijah Wood’s tattoo is on his lower stomach. Sean Astin and Billy Boyd have the tattoo on their ankles (to commemorate all those hours in the hobbit feet). Orlando Bloom, who plays the archer elf Legolas, has his on his forearm. His tattoo is visible during a fight scene in Pirates of the Caribbean: The Curse of the Black Pearl (2003). Ian McKellen’s is on his shoulder. Dominic Monaghan’s is on his shoulder. And the eighth member, Sean Bean, has his tattoo on his right shoulder. Viggo Mortensen has his tattoo on his left shoulder. It is visible on some pictures from the movie Eastern Promises (2007).

25. Liv Tyler accidentally stabbed herself up in the right thigh, when filming the ‘If you want him, come and claim him!’ sequence. Footage was featured in bloopers and outtakes of the film.