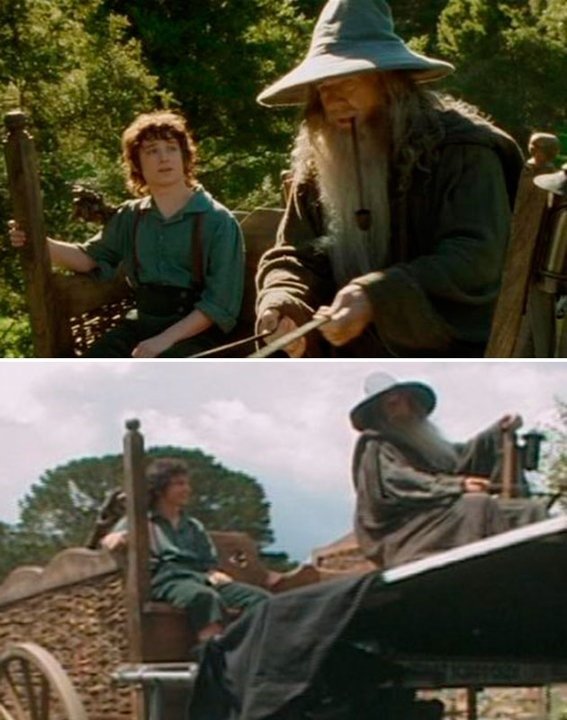 1. The hobbits needed to appear about three to four feet tall, tiny compared with the seven-foot Gandalf. This was often accomplished using forced perspective, placing Ian McKellen (Gandalf) consistently closer to the camera than Elijah Wood in order to trick the eye into thinking McKellen is towering.

2. One of the indistinct words that Gandalf whispers to the moth when he is trapped by Saruman is “Gwaihir”, the name of the eagle that later rescues him from the tower.

4. It’s common practice with a high budget feature film to have more than one unit shooting at any one time, usually two or three. With “The Lord of the Rings”, there were occasions when there would be between five and seven units shooting at any given time.

5. Liv Tyler deepened her voice so much to play Arwen that her father Steven Tyler asked her if her voice had been dubbed by someone else. 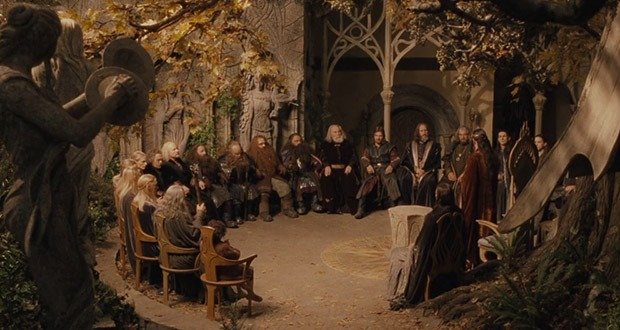 6. During the Council of Elrond, leaves are continually falling in the background to suggest that this is a meeting that is taking place outside. This meant about half a dozen crew members were positioned above the set, dropping leaves at various intervals. This also meant that the production department had to collect sacks and sacks of leaves during autumn, and of course dead leaves turn brown fairly quickly. This meant that every single one of those leaves had to be individually painted.

7. The two most renowned Tolkien artists are Alan Lee and John Howe, and so it was important to Peter Jackson to have those two on board. Lee was tracked down to a tiny little village in Dartmoor, England and was FedExed a package of Jackson’s Heavenly Creatures (1994) and a letter outlining his intentions. They monitored the progress of the FedEx package every step of the way, but were somewhat surprised when Lee rang them only 3 hours after delivery to say he’d love to work with them. Howe meanwhile was living in Switzerland, and because someone hadn’t worked out the time differences between Europe and New Zealand correctly, was rung about 2am. He says that the biggest frustration with that phone call was waiting for Jackson to finish his pitch before he could say yes.

8. The four actors playing the young Hobbits would have to go into make-up at 5am and stand for an hour and a half while their prosthetic feet were being applied. Sean Astin’s personal make-up artist doing this was called Sean Foot.

9. Hobbiton was made a year before production began to make it look like it was a natural, lived-in place, complete with real vegetable patches. The greens department regulated the length of the grass by having sheep eat it.

10. Throughout the trilogy, the color of Legolas’ eyes change from blue to brown. This is because the contact lenses Orlando Bloom was wearing scratched his corneas and could not be worn every day. In some of the shots, the post production team digitally changed the color of his eyes. 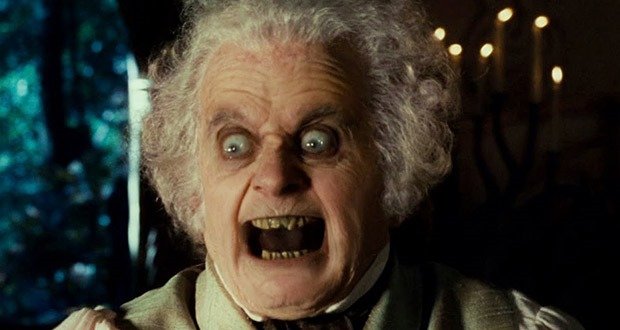 11. A rubber puppet with a horrific face was superimposed over Ian Holm’s face when Bilbo Baggins covets the ring in Rivendell. Holm was so delighted with the puppet that the design team had a cast iron version of it made for his mantelpiece and gave it to him as a parting gift when Holm wrapped all his scenes on the film.

12. During Bilbo’s party Pippin can be seen in the band playing a guitar.

13. Sean Astin reckons that there were 50 separate days of the 15-month shoot where the Hobbits had their prosthetic feet applied and they were never seen on camera.

14. Viggo Mortensen kept his sword with him at all times off set so that he could remain in character. He was questioned several times by police after reviewing his training sessions with the sword and being spotted by members of the public.

15. Sean Bean swears that he was not actually in New Zealand on the day they shot the scene where the Fellowship departs from Rivendell, and that Boromir must have been digitally added to the shot. 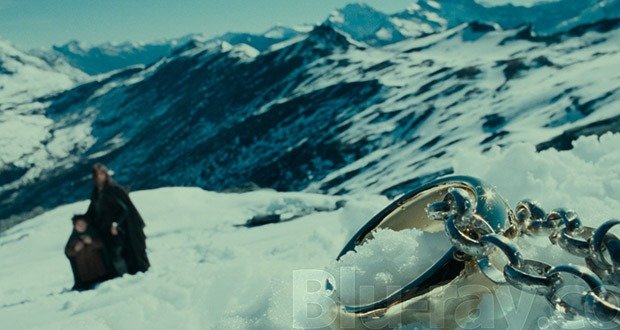 16. When Frodo falls on the snow and loses the ring, a close-up of the ring with Frodo in the background is shown. In order to keep both the subjects focused, a giant ring (6 inches of diameter) was used.

17. Gollum looks different in the first movie than in later installments, because scheduling forced those scenes to be filmed based on an early design (made before Andy Serkis was cast in the role). He is only seen in brief glimpses, partly due to this discrepancy, and partly to tease audiences before his entrance in The Lord of the Rings: The Two Towers (2002). Peter Jackson (jokingly) said in the commentary on the Extended DVD that sometime in the future he would enjoy creating a ‘Special Edition’ (a la Star Wars: Episode IV – A New Hope (1977)) where this inconsistency could be fixed.

18. More than 1,600 pairs of latex ears and feet were used during the shoot, each “cooked” in a special oven running 24 hours a day, seven days a week. There was no way of removing the feet at the end of the day without damaging them and so each pair could only be used once. The used feet were shredded to prevent a black market in stolen hobbit feet but apparently Dominic Monaghan (Merry) kept a pair.

19. John Rhys-Davies suffered from a reaction to his prosthetics – usually inflammation around the eyes – that meant that he could never be shot on consecutive days but would always require at least a day off for his skin to return to normal. He was never anything less than 3 hours in the make-up chair.

20. Every actor in the film wore a wig apart from Billy Jackson, the director’s (Peter Jackson) toddler son, seen listening wide-eyed to a tale told by Bilbo Baggins at his birthday party. He had perfect Hobbit hair. 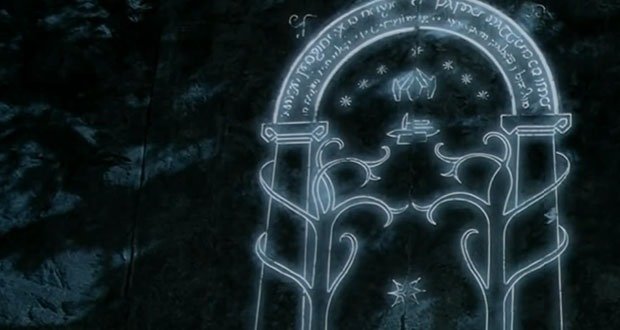 21. The illuminated door that leads to the Mines of Moria was painted with the same substance that cats’ eyes and road signs are made of.

22. The water used on the Rivendell set was brought in and contained chlorine. The entire water system had to be water-proof so that the chlorinated water would not leak into the ground and contaminate natural water. After shooting was finished, the water used was collected back.

23. Although Bill the pony is a feature of the novel, the writers initially decided not to include him as the Fellowship make their journey for the simple logistical reason of transporting a horse deep into the mountains. The problem was solved in the more difficult shots by using the classic pantomime trick of dressing two people up as a horse, one at the front and one at the back.

24. Usually on a feature film, when the director comes to view the dailies, there’s about 20-25 minutes of footage to be seen. Because of the number of different units out filming at any one time, the dailies for “The Fellowship of the Ring” were about 3-4 hours long, ie, the length of one finished film.

25. The Tolkien estate was never in favor of Peter Jackson’s film adaptation but seeing as J.R.R. Tolkien signed the rights away in 1968 for $15,000 ($99,233.19 in 2012 dollars), there was nothing they could do about it. Tolkien’s grandson Simon Tolkien came out in support of the production and was, according to some accounts, disowned by his relatives, although Simon’s father Christopher Tolkien later denied this.

AskReaders: What is something rich people buy that poor people know nothing about?