Here is part 5 of 25 Interesting Facts About LOTR Movie Trilogy. 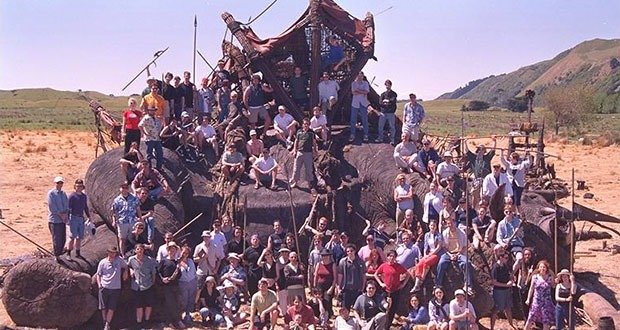 1. The dead oliphaunt carcass used in The Return of the King is reportedly the largest prop ever built for a motion picture. According to members of the prop department, director Peter Jackson still thought it could have been bigger.

2. Great caution was taken for the scene where Faramir is dragged back to Minas Tirith on his horse. The filmmakers were afraid that the horse might suddenly start to run, dragging David Wenham behind it so a release system was built into the saddle. Wenham held a handle in his right hand, and if the horse started to run, he could simply pull it and be released from the stirrup. Fortunately, they ended up not needing it.

3. Fans of the film often speculate why the characters didn’t just fly on the giant eagles into Mordor and drop the ring into Mount Doom. This is not, in fact, a plot hole. This was explained in the book but the film makers didn’t think there would have been a need to because they felt it was obvious why they didn’t do this. The eye of Sauron would have been a major obstacle. Even professor Tolkien vetoed the abuse of eagles’ intervention when presented an early project of a movie from his book.

4. In every installment of the trilogy, one character says the subtitle of the film. In Fellowship during the council scene Elrond refers to the nine as the “Fellowship of the Ring”; in the Two Towers it’s Saruman who says “The Two Towers” during a voiceover; and finally in the third film, Gandalf tells the steward of Gondor that he can’t refuse the Return of the King.

5. The final day of filming on the trilogy actually happened over a month after this movie was theatrically released, and three weeks after the 2004 Academy Awards. Peter Jackson arranged to film one final shot of skulls on the floor in the tunnel of the Paths of the Dead, which was included in the Extended Edition of ROTK. He thought it was funny to be doing filming on a movie that had already won the Best Picture Oscar. 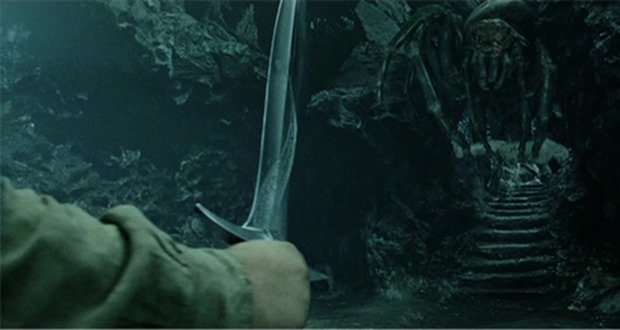 7. In the scene when Denethor attempts to burn Faramir on the pyre, the pyre could not truly be on fire because Gandalf’s horse would not go near it. To solve this, the crew reflected a real fire onto a pane of glass in front of the camera so that it looks as though the pyre is burning.

8. Elijah Wood is noted for his ability to stare fixedly in front of him for ages without blinking, which came in very useful for the scenes where the comatose Frodo was wrapped up in Shelob’s web-like cocoon.

9. The Lord of the Rings trilogy became the most nominated film series in Academy Award history with 30 nominations, surpassing both the Godfather trilogy (28) and the Star Wars franchise (21).

10. The final reel of the third film to be completed was done only five days before the world premiere in Wellington, New Zealand. It was actually still wet from the developing process because there was no time to dry it. The premiere was the first time that Peter Jackson had seen the completed film. 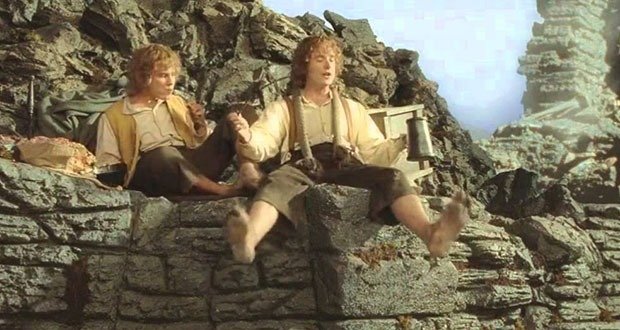 11. For the scene where Merry and Pippin are smoking their pipes at Isengard, Dominic Monaghan (Merry) had to drink a glass of milk beforehand to keep himself from throwing up while smoking the pipe.

12. After the premiere of the third movie in Wellington, the city held a party that went on till dawn, funded by the City Council to the tune of $400,000, with street performers, outdoor screenings, an introduction from Prime Minister Helen Clark and a giant mock-up of a Nazgul flying over the Embassy Theatre.

13. Gollum is missing his left ear lobe. This is due to an air trap in the casting that was made for Peter Jackson’s approval of the figure. When looking at the casting, the design team concluded that it should stay that way since it looked like a battle wound that might have occurred during Gollum’s past adventures.

14. The live-action Rohan army is made up of several hundred New Zealander extras, who responded to an open casting call for anyone who could ride a horse. Many of them were women, who had to perform male riders. The only woman in Rohirrim huge assault is obviously Eowyn.

15. Where Frodo is stabbed by Shelob’s stinger, Elijah Wood was actually stabbed with a prop one. On the Extended DVD Commentary, he and Sean Astin comment that it was not only very, very painful, but had actually done damage to the point that Wood had to stay in the hospital for a couple of days. Astin (on the Commentary track) jokes that they used appendicitis as the excuse, but wonder if that event is what (ironically) caused Wood’s actual episode of appendicitis later on (2003). 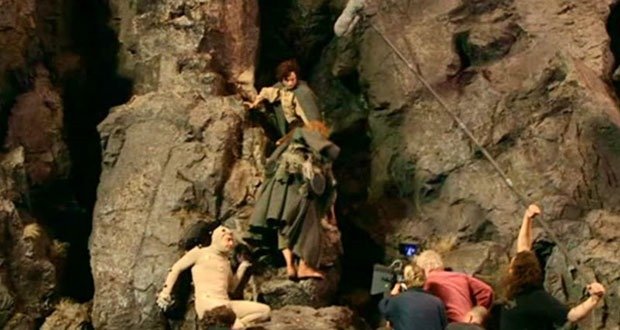 16. Filming was progressing on The Lord of the Rings: The Fellowship of the Ring (2001) in the location of Queenstown when suddenly the town was hit with massive floods and exterior filming had to be suspended. The only available indoor facility that could be used for a studio set was the squash court in a local hotel. Thus, the next day the next scene to be filmed was the intense moment from The Lord of the Rings: The Return of the King (2003) when an obsessed Frodo sides with Gollum and sends Sam on his way. Both Elijah Wood and Sean Astin baulked at having to do such a pivotal scene without preparation (Andy Serkis had not been cast at this point so someone from the crew filled in for Gollum) but filming went ahead as planned. Astin’s scenes were all successfully completed. The next day, however, the sun came out and the floods abated so exterior filming could resume. The intent was always to return to the squash court (where the set remained standing) to do Elijah Wood’s scenes, but, for the next five weeks there was no rain to interrupt exterior filming. At the end of that period, the crew had moved to a new location. Elijah Wood finally got to do his side of the scene one year later in the same location – the squash players of Queenstown had been without a court for that whole amount of time as the set had remained in place on the court the entire period.

18. The battle scenes, which reportedly contain over 200,000 digital participants, are so huge that an extra room had to be built onto Weta Digital’s effects facility to house all the computer equipment needed to render the scenes.

19. Since 2007, composer Howard Shore and conductor Ludwig Wicki have worked together to bring the trilogy to the concert hall, with the complete score being performed live to the movies by a complete symphony orchestra and chorus.

20. When Aragorn holds his speech to the troops he says “A day may come when the courage of men fails, when we forsake our friends and break all bonds of fellowship, but it is not this day. An hour of wolves and shattered shields, when the age of men comes crashing down!” This is a very close paraphrase to 45th stanza of the old Norse poem Völuspa which describes Ragnarök. The original stanza goes about like this: “Brother shall strike brother and both fall, Parents shall defile their kin; Evil be on earth, an age of adultery, Axe time, sword time, Of splintered shields, A wind-age, a wolf-age till the world caves in; No man will spare another.” The same poem is also the source of several of the names of the dwarves in the world of Tolkien. 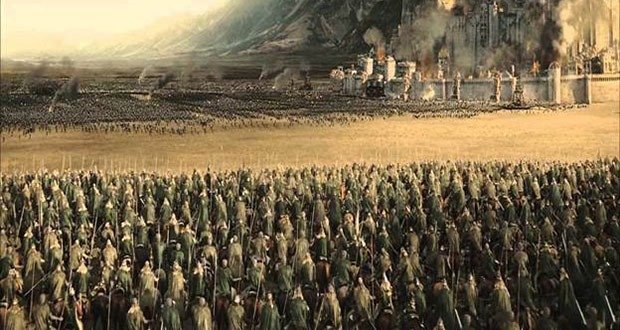 21. The Battle of Pelennor Fields was filmed on a large field heavily populated with rabbits. The place had to be carefully inspected for rabbit holes, which were all filled in due to the danger they would pose if a horse were to step into one, which could cause a major pile-up, with injuries to both horses and riders.

22. The scene where Aragorn’s army assembles in front of the Black Gate of Mordor was shot in a desert that was used by the army as a training field. Because it was still littered with mines and bombs that hadn’t gone off, the army had to sweep the field with metal detectors to make the danger for the actors and extras acceptable at least.

23. The WETA special effects crew felt very challenged when creating Shelob by how effective the giant spider had been in Harry Potter and the Chamber of Secrets (2002).

24. Frodo and Sam’s climb up Mt. Doom was shot on a volcano called Ruapehu. The footing was so steep on the volcano that Elijah Wood and Sean Astin were hooked up to safety wires. If one of them lost their footing, the wires prevented them from sliding halfway down the volcano. The wires were painted out digitally.

25. The amount of money that New Line reclaimed in tax breaks on the 3 “Lord of the Rings” films was ten times more than the entire annual budget of the New Zealand Film Commission, which funds local film-making.