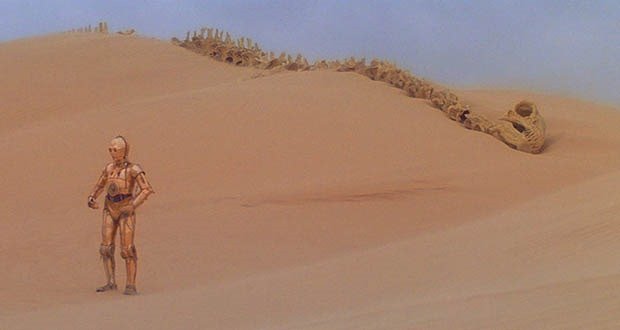 1. The skeleton that C-3PO passes belongs to a Tatooine creature called a Greater Krayt Dragon. This artificial skeleton was left in the Tunisian desert after filming and still lies there. During filming of Star Wars: Episode II – Attack of the Clones (2002), the site was visited by the crew once more and the skeleton was still there.

2. George Lucas was so sure the film would flop that instead of attending the premiere, he went on holiday to Hawaii with his good friend Steven Spielberg, where they came up with the idea for Raiders of the Lost Ark (1981).

3. In early drafts of the script, R2-D2 could speak standard English, and had a rather foul vocabulary. Although all of R2’s English speech was removed, many of C-3PO’s reactions to it were left in.

4. The actors found George Lucas to be very uncommunicative towards them, with his only directions generally being either “faster” or “more intense”. At one point, when he temporarily lost his voice, the crew provided him with a board with just those two phrases written on it.

5. Harrison Ford didn’t learn his lines for the intercom conversation in the cell block so it would sound spontaneous. 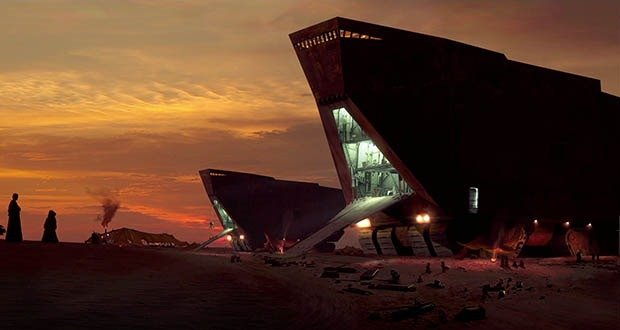 6. While George Lucas was filming on location in Tunisia, the Libyan government became worried about a massive military vehicle parked near the Libyan border. Consequently, the Tunisian government, receiving threats of military mobilization, politely asked Lucas to move his Jawa sandcrawler farther away from the border.

7. According to Harrison Ford, during the making of the film, he and Mark Hamill would usually fool around and not commit to their work whenever Alec Guinness was not on set. When Guinness was on set, they behaved much more professionally.

8. George Lucas’ decision to accept a lower salary on the film in exchange for full merchandising rights was considered a fool’s gamble on his part. Toys based on movies had never been major money-earners (though some movie-toy combinations had done moderate retail returns) because of the long gap between when a movie would go through its theatrical run and when any products based on it would be available. Star Wars, however, was such a phenomenon that it reached the holiday 1977 sales period in full swing, and changed the way movies were merchandised forever.

9. Stunt doubles were not used for the scene in which Luke and Leia swing to safety. Carrie Fisher and Mark Hamill performed that stunt themselves, shooting it in just one take.

10. The Chewbacca suit retained a bad smell for the duration of filming after the trash-compactor scene. 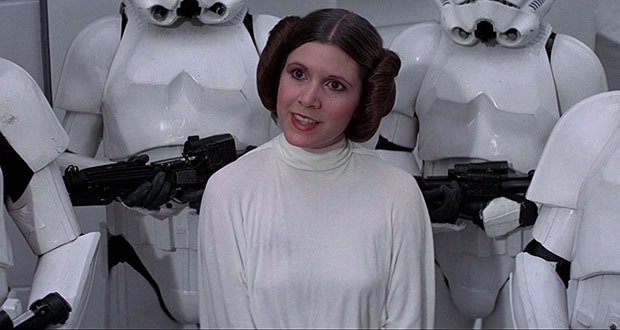 11. Carrie Fisher’s breasts were taped down with gaffer tape, as her costume did not permit any lingerie to be worn underneath. She joked later, “As we all know, there is no underwear in space.”

12. James Earl Jones supplied the voice of Darth Vader, but specifically requested that he not be credited. At the time, the reason he cited was that he felt he had not done enough work to get the billing, but he later admitted that he didn’t want his name associated with the film because he was still an up-and-coming actor, and didn’t want to be typecast. Jones does receive billing in the subsequent sequels and the 1997 “Special Edition.”

13. The light saber sound effect is a combination of the hum of an idling 35mm movie projector and the feedback generated by passing a stripped microphone cable by a television.

14. Mark Hamill held his breath for so long during the trash compactor scene that he broke a blood vessel in his face. Subsequent shots are from one side only.

15. When the storm troopers enter the room where C-3PO and R2-D2 are hiding, one of the actors accidentally bumps his head on the doorway due to his limited visibility. When the Special Edition came out in 1997, a sound effect had been added to the scene to accompany the head bump. 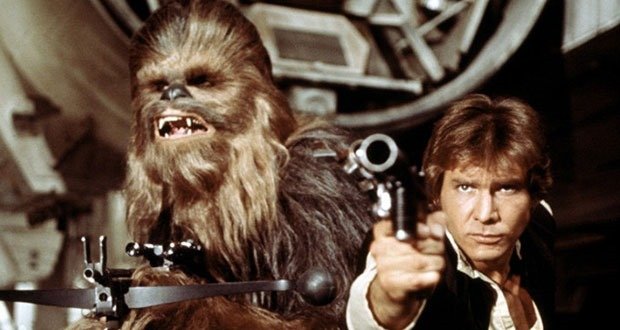 16. According to Mark Hamill, studio executives were unhappy that Chewbacca has no clothes and attempted to have the costume redesigned with shorts.

17. The name Wookiee came about as a result of an accident. When San Francisco DJ Terry McGovern was doing voice-over work on THX 1138 (1971)for George Lucas, he made a blunder and exclaimed, “I think I ran over a wookiee back there.” George Lucas, confused, asked what he meant by the term. Terry McGovern admitted that he didn’t know and added that he simply made it up. George Lucas never forgot the cute word and used it years later in Star Wars: Episode IV – A New Hope (1977).

18. Kenny Baker has said that often when the cast and crew broke for lunch, they would forget he was in the R2-D2 outfit and leave him behind.

19. When 20th Century Fox attempted to distribute the film in the U.S., fewer than 40 theaters agreed to show it. As a solution, Fox threatened that any cinema that refused to show Star Wars would not be given the rights to screen the potential blockbuster The Other Side of Midnight (1977) (which ended up grossing less than 10% of what Star Wars did).

20. Princess Leia and Obi-Wan Kenobi never actually meet within this film. The closest they get to meeting in this film is when she sees him from a distance during the lightsaber duel. 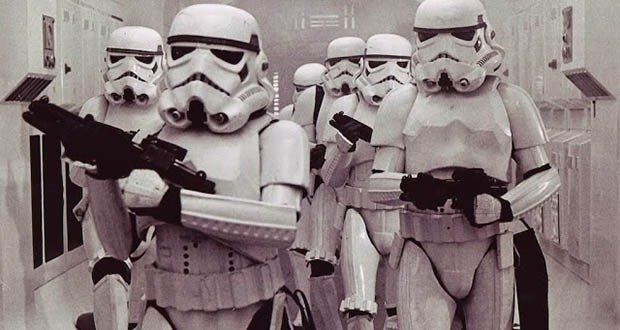 22. The bantha seen being mounted by tusken raiders after they spot Luke Skywalker’s speeder, was actually an Asian elephant dressed in a costume of fur and fake horns. Filming the scene proved difficult, because the elephant was not accustomed to the extreme heat of Death Valley, and kept removing the costume.

23. The accounts on how Alec Guinness regarded the movie and his work on it vary greatly. He frequently recalled the experience of making the movie as a bad one, and consistently claimed that it was his idea to have his character killed off in the first film, so as to limit his involvement and make sure he “wouldn’t have to carry on saying these rubbish lines”. He later mentioned to ‘shrivel up’ each time someone mentioned the movie, and claimed to throw away all Star Wars related fan mail without even opening it (a logical paradox, making it likely that this is not true, as his journals report what some of this mail said in detail), because he hated the fact that he would be most remembered as Obi -Wan Kenobi despite other roles which he held in much higher regard. Contrary to all this, George Lucas has said he made the decision to kill off Kenobi, since the character had no part to play in the movie’s finale, and deserved a memorable exit. According to Lucas, Guinness was “less than happy” that his character was dying earlier than expected, and even appeared to enjoy his time on set. Lucas, Mark Hamill, Harrison Ford and Carrie Fisher have always stated how patient and helpful Guinness was on the set, and praised his professionalism and respectfulness to all cast and crew members.

25. Peter Mayhew worked as an orderly in a Yorkshire hospital prior to being cast in the movie. He won his role ten seconds after meeting George Lucas for the first time; all the 7’2″ Mayhew had to do was stand up.

AskUs: There were 6 million victims of the holocaust. That is a huge number.