Here are 25 Interesting Facts About Star Wars: Episode V – The Empire Strikes Back (1980).

1-5 Facts About The Empire Strikes Back 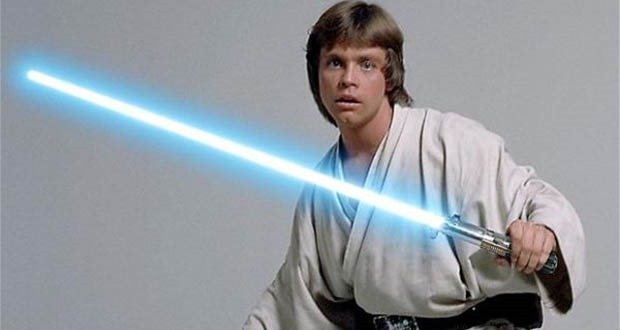 1. The shots where Luke uses his Jedi powers to retrieve his lightsaber from a distance were achieved by having Mark Hamill throw the lightsaber away and then running the film in reverse.

2. Mark Hamill had to bang his head 16 times on the ceiling of Yoda’s hut before Irvin Kershner was satisfied.

3. In order to avoid sharing creative rights, George Lucas decided to avoid using a major studio to finance this film. Instead, he bankrolled the $33 million production himself, using a combination of his profits from Star Wars: Episode IV – A New Hope (1977) and a bank loan. Although the move was risky, it paid off several times over. Lucas recovered his investment within three months of the film’s release. He then showed gratitude far beyond the Hollywood norm, by sharing the profits with his employees (nearly $5 million in bonuses).

5. Han Solo is the only non-Jedi/Sith in the entire original trilogy to ever wield a lightsaber, which he used to cut open the tauntaun’s belly.

6-10 Facts About The Empire Strikes Back 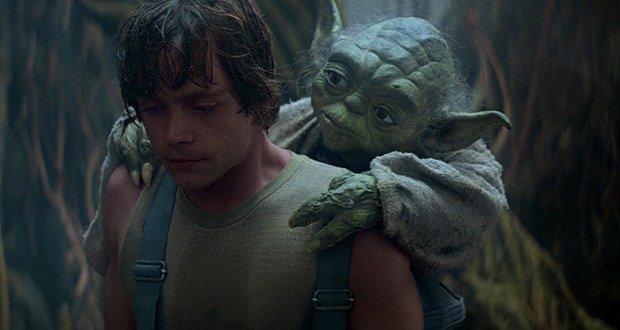 6. George Lucas was so impressed by Frank Oz’s performance as Yoda that he spent thousands of dollars on an advertising campaign to try and get him an Oscar nomination for Best Supporting Actor. Lucas’ campaign ultimately failed because it was felt that a puppeteer wasn’t an actor. Lucas felt this wasn’t fair to Oz, who actually didn’t mind.

7. When shooting on location in Finse, Norway, a fierce snow storm hit the hotel where the cast and crew were staying. This would have normally halted filming, but director Irvin Kershner thought these weather conditions were an excellent opportunity to film the scene where Luke wanders through the snow after escaping the Wampa cave. He did this by sending Mark Hamill outside into the cold, while he and the cameraman stayed and filmed inside the hotel’s front hall.

8. With the exception of being sucked out of a Cloud City window, Mark Hamill did all of his own stunts.

9. In the DVD commentary, Carrie Fisher relates that during some of the London filming, she stayed at a house rented from Eric Idle. Idle and the Pythons were filming Life of Brian (1979) at the time. One evening, Idle had a small party, including Harrison Ford and The Rolling Stones, and served a potent liquor (which the Pythons had been distributing to extras on their film, to help boost morale) that he referred to as “Tunisian Table Cleaner”. They stayed up most of the night drinking and having fun. The first scenes shot the next day were the arrival at Cloud City, which she says helps explain why she and Ford were so happy in those scenes. Idle is said to be pleased that he had a small hand in how the finished film turned out.

10. Han Solo’s use of his mount’s entrails to keep Luke warm is actually an American Indian trick. According to legend, an Indian hunter had killed a bear and then became trapped by a sudden blizzard. He cut open the bear’s stomach and climbed inside and stayed warm and safe until the storm had subsided.

11-15 Facts About The Empire Strikes Back 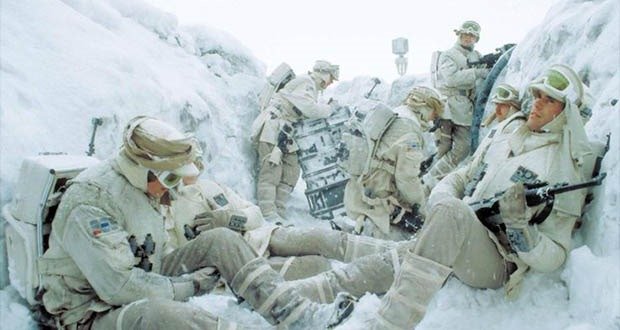 11. During the filming of the Battle of Hoth, the Echo Base troops were actually Norwegian mountain-rescue skiers. In exchange for participation in the film, Lucasfilm made a donation to the Norwegian Red Cross.

12. Originally in the asteroid scene, one of the asteroids was actually a shoe. The rumor is that George Lucas asked the SFX people to redo the scene so many times that they got annoyed and one of them threw in their shoe. Later remaster visions has said to have corrected this.

13. Another of the asteroids is actually a potato. It appears just as the Millennium Falcon first enters the field. Two asteroids travel from the top left to the bottom right corner of the screen. Just after the second asteroid leaves the screen a third one appears in the top left corner. This is the potato.

14. To preserve the dramatic opening of the Star Wars movies, George Lucas insisted on moving all the credits to the end of the film. However, although the Writers’ Guild and Directors’ Guild had begrudgingly allowed this on Star Wars: Episode IV – A New Hope (1977) (because that film wasn’t expected to be very successful), they resented the trend being continued on this film. First they tried to pull Empire from release, but were unsuccessful. They then fined Lucas heavily, and tried to fine Irvin Kershner, but Lucas paid all the fines himself (nearly $250,000). Lucas then bitterly dropped his membership in the Writers’ Guild, Directors’ Guild, and the Motion Picture Association of America, a move that has hindered his hiring choices on later films.

15. Yoda’s iconic manner of speech has the parts of speech in Object Subject Verb order. Very few languages on Earth use this and most are based in the Amazon River basin.

16-20 Facts About The Empire Strikes Back 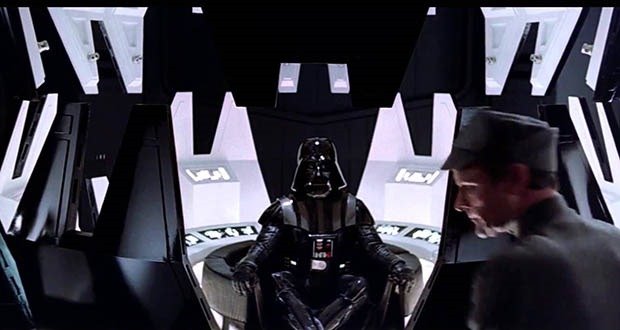 16. Darth Vader’s meditation chamber is said to be a hyperbaric chamber which charges the interior air to greater than one atmospheric pressure, thus allowing him to remove his helmet and breathe normally for limited periods of time. This was not as originally presented in the film, however, which featured an additional breathing mask for Vader in the chamber, which was notoriously shown for only a split second and never made it into the official continuity.

17. An oft-quoted myth is that the Wampa attack on Luke was devised to explain the actual scars on Mark Hamill’s face because he had been involved in a car crash and had to have reconstructive surgery. Hamill did indeed survive a serious car crash in January 1977, but did not have any visible scars by the time Empire began filming over two years later.

18. One of the bounty hunters Darth Vader hires to find Han Solo is IG-88. He is one of a series of IG-86 Sentinel Droids. Another can be seen in the Cloud City. The shell of this second droid can be seen in the smelting room next to a furnace where C-3PO is found by Chewbacca.

19. The sound of Darth Vader’s shuttle door opening is reportedly a recording of a whole block of Alcatraz cell doors slamming shut.

20. In each Star Wars film, the line “I have a bad feeling about this” is spoken by one of the characters. In this film, Leia says it.

21-25 Facts About The Empire Strikes Back 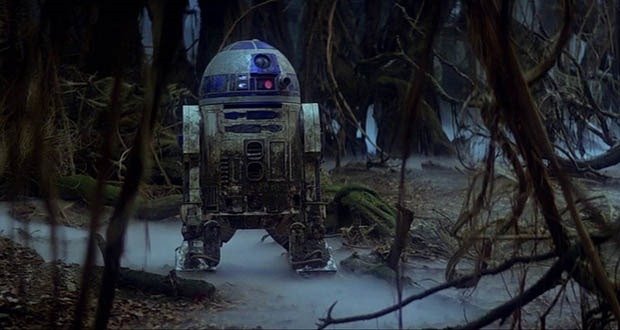 21. The scenes where R2-D2 is submerged in the mud pool were shot in George Lucas’ unfinished swimming pool. Most of the crew were hidden under the water and the entire sequence was shot by George Lucas himself.

22. The blizzard in the Hoth scenes is a real blizzard. No effects were used. Harrison Ford could not arrive at the filming location via the regular train route as it was closed due to the bad weather – so he went to the site on a snow plow.

23. At 30, Episode V has the lowest body count of the entire Star Wars saga.

24. In an interview with Cinescape magazine, director Irvin Kershner said he had no interest in films with special effects. However, he was won over by George Lucas, although Kershner was determined to make the film more about characterizations than hardware. Kershner spent several months working on the script, pushing the writers into humanizing the characters more (something that Lucas has often been criticized for failing to do).

25. George Lucas had originally planned to only Executive Produce and finance the film, leaving the directorial duties in the hands of Irvin Kershner and day-to-day producing duties to Gary Kurtz. Directing the original Star Wars: Episode IV – A New Hope (1977) had left Lucas exhausted and sick, and he had intended to take time off to start to focus on the expansion of the Lucasfilm company and spending more time with his then-wife Marcia Lucas, so that they could start a family and finish construction on Skywalker Ranch. However, when production on this film ran overbudget and behind schedule, Lucas had to step in and take a more hands-on role, going on location to oversee filming and even directing portions of the film. A disastrous rough cut of the film proved incoherent during screenings, and facing the possibility of financial ruin, Lucas then re-edited the film himself with even worse results. Extensive reshoots and further post-production effects work put enormous strain on his health, his marriage, and his relationships with Kershner and Kurtz. Though the film proved an enormous critical and commercial success, Lucas would never work with Kurtz again, and his marriage dissolved a couple of years later.