1-5 Interesting Facts About Return of the Jedi 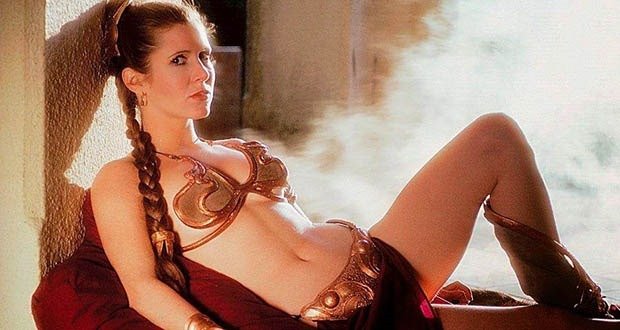 1. Carrie Fisher complained about her costumes in the previous two movies. She said they were so long, you could not tell “she was a woman.” Those complaints led to the skimpy outfit she wore as Jabba’s slave. The costume became something of a running joke among the crew, because the metal framework that held the top together meant that the costume didn’t move well with her. Since Fisher didn’t like the industry standard solution of using double-sided tape, it became necessary before each take to have a wardrobe person check to ensure that her breasts were still snug inside the costume top (and several scenes had to be re-shot when “wardrobe malfunctions” occurred).

2. During the shot in which Salacius Crumb (the small, annoying, rat-like thing that sits with Jabba in his palace) is chewing off C-3P0’s eye, Anthony Daniels had a panic attack while in the C-3P0 suit. While filming, he didn’t actually say his lines (all his lines were dubbed in post-production anyway), but repeated “Get me up. Get me up.” over and over. This take is the take used in the final film.

3. When Leia gets wounded, if you look closely you can spot Han Solo accidentally grab her breast before correcting himself.

4. In the DVD 2004 release, George Lucas explained the reason behind why Yoda told Luke that Darth Vader was his father. Lucas had consulted with a child psychologist during the making of the film. The psychologist said that unless it was unequivocally stated that Vader was Luke’s father, moviegoers age 12 and under would dismiss Vader’s claim to be Luke’s father as a lie.

5. Originally, Yoda was not in the film’s script. Yoda was added when George Lucas determined him best to properly confirm to Luke as to whether Vader was his father or not.

6-10 Interesting Facts About Return of the Jedi 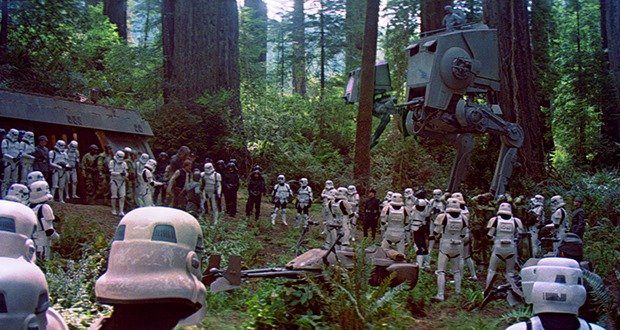 6. As the Californian forest location the production was using was due for logging, the special effects crew were allowed to knock trees down in the Battle of Endor.

7. Endor is the name of a place in the Bible; it’s a village found in Biblical Israel’s territory of Isaachar, where King Saul went on the eve of his final battle with the Phillistines and came across “The Witch of Endor.” It also the Elvish name for Middle-Earth in J.R.R. Tolkien’s “Lord of the Rings.”

8. Nien Nunb, Lando’s co-pilot, speaks a Kenyan dialect called Haya. According to sound designer Ben Burtt, the lines were delivered by Kipsang Rotich, a Kenyan student living in the US, and are actually correct Hayan translations of the English text. Audiences in Kenya were reportedly very thrilled to hear their language spoken in proper context.

9. Whilst clambering over Jabba the Hutt, one of the high heels that Carrie Fisher was wearing accidentally punctured the latex casing and pierced Mike Edmonds who was operating the tail inside.

10. The Emperor’s chair was mechanized so that it could rotate when the scene called for it. However, the mechanism never worked properly, so Ian McDiarmid had to make it move by shuffling his feet. A piece of tape on the floor told him when to stop so it would not be visible to the camera.

11-15 Interesting Facts About Return of the Jedi 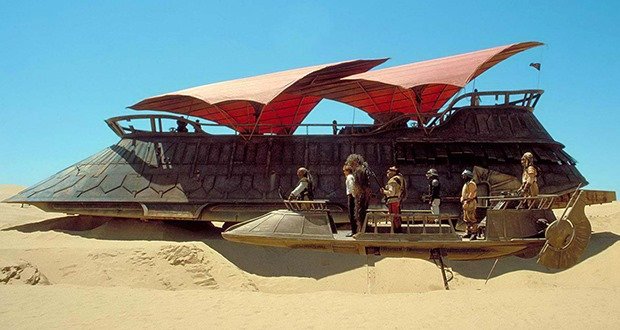 11. Jabba’s sail barge was filmed in Yuma, Arizona. The film crew had problems avoiding the 35,000 dune buggy enthusiasts in the area. To preserve secrecy, the producers claimed to be making a horror film called “Blue Harvest” with the tagline “Horror beyond imagination”, and even had caps and t-shirts made up for the crew. A chain-link fence and a 24-hour security service could not prevent die-hard fans from entering the set and sneaking some photographs.

12. Another reason for filming under the guise of nondescript horror movie title, “Blue Harvest” was partly to put off any snoopers and also because the production found that if they mentioned they were working on the next Star Wars film, suppliers would automatically ramp up their prices, assuming that money was no object for Lucasfilm.

13. Leia was never intended to be Luke’s sister (as their brief kiss in the previous film shows). A sequel trilogy was apparently going to be about Luke finding his long lost sister. However, George Lucas decided he didn’t want to do that and wanted to tie everything up with this film.

14. George Lucas fired his friend and producer of the previous two Star Wars movies, Gary Kurtz, before production began (although some sources say he simply quit on his own) as Kurtz disagreed with Lucas’ assertion that audiences didn’t care for the story but for the spectacle.

15. The Endor shots were filmed near Crescent City, California. Forest work was especially hard on the Ewok actors. Production Assistant Ian Bryce arrived on the set one day to find a note from the Ewok actors saying that they had all had enough and they were on their way to the airport. Bryce tried to drive to the airport, but got a flat tire not far from the set. He found another car and was about to leave when the Ewoks’ bus pulled up, and all the Ewok actors got off wearing “Revenge of the Ewok” t-shirts.

16-20 Interesting Facts About Return of the Jedi 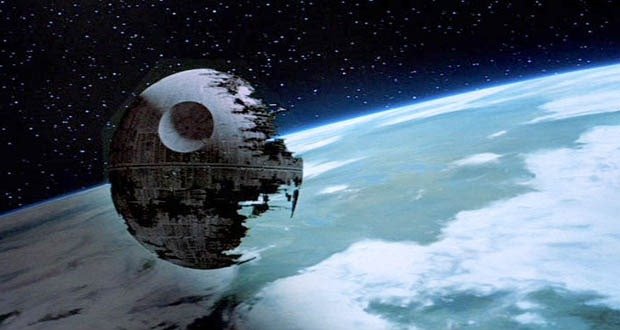 16. Death Star II was approximately 460% larger than the first one.

18. Harrison Ford suggested that Han Solo sacrifice his life to save his friends, but George Lucas disagreed with him, as he wanted Han to play a heroic part at the end.

19. The growls and sounds of the Rancor in Jabba;s Palace were actually made by a dachshund.

20. The movie was originally to be titled “Revenge of the Jedi” but producers thought Jedi wouldn’t seek revenge, being so righteous and all. Some posters and theater stand-ups were made early, but pulled very soon as the title changed names. Also Star Trek II: The Wrath of Khan (1982) was originally to be called “Star Trek: The Revenge of Khan”, but the title for that movie was changed to avoid confusion with this movie back when “Revenge of the Jedi” was being considered.

21-25 Interesting Facts About Return of the Jedi 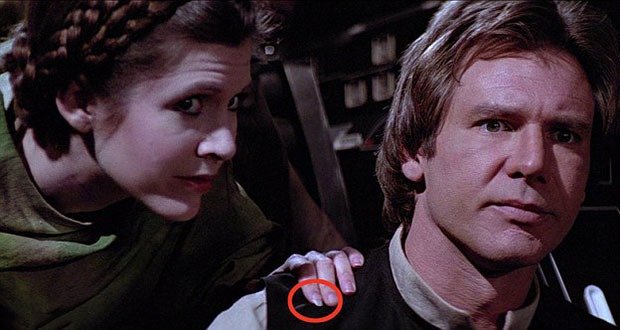 21. When Han is looking at the Millennium Falcon, perhaps for the last time, Leia places her hand on Han’s shoulder. Look closely at Leia’s fingernails. Her index nail is longer than the rest. This is attributed to Carrie Fisher’s notorious drug problems in the 1980s. Thus, her “cocaine nail.” The actress later overcame her drug addiction.

22. When preparing to work on the special edition one of the ILM employees was talking to a friend and mentioned in passing that they were extending the musical number in Jabba’s palace. The friend happened to be the brother of Femi Taylor, the dancer that played Oola (the slave girl/dancer who is fed to the Rancor) and suggested that they get in contact with her as she was in even better shape than she was when they originally shot the scene. They ended up using her, and the scene is a combination of footage that they already had and the new footage recorded 15 years later. Femi Taylor also has the distinction of being the only cast member from the original movies to reprise her role for the special edition.

23. In the Battle of Endor, many of the “ships” and other objects far in the background are actually things like chewed-up gum. The crew knew there was so much action going on that people would not notice things like this and used them to fill up the picture in the background.

25. Admiral Ackbar’s backstory is that he was once the slave of Grand Moff Tarkin, as well as his personal pilot.