1-5 Interesting Facts About The Martian 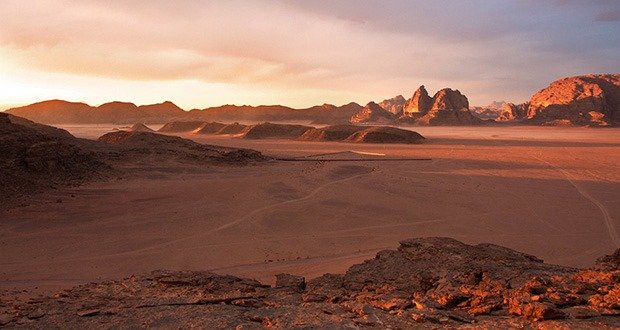 1. The Mars exteriors were shot in Wadi Rum, Jordan, which has a red colored desert. Another Mars mission film, Red Planet (2000), was shot there.

2. The writer of the novel, Andy Weir, first published his book for free on his own blog for fun. Then people asked him to put it in a downloadable form, then to put it on Amazon for Kindle download which he did at the then minimum price of $0.99.

3. Ridley Scott claimed that Matt Damon’s solo scenes were shot for five weeks straight, after which Damon was relieved from the schedule. Consequently, Damon did not meet most of his co-stars until the cast was reunited to promote the film.

4. It’s never addressed in the movie how Watney navigates without a GPS or compass (Mars has no magnetic field, making a compass useless). In the book, he uses the quick passage of the moon Phobos to orient himself.

5. NASA was consulted in order to get aspects of space and space travel, specifically in relation to Mars, with the most accuracy. NASA is federally funded, yet charges no one, including private for-profit organizations, any fees for use of and access to its archives and consultancy.

6-10 Interesting Facts About The Martian 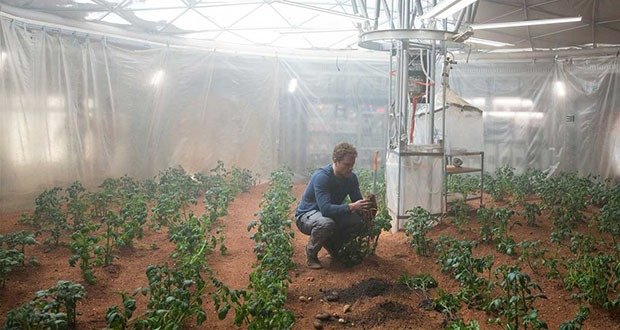 6. A real potato farm was installed on the studio lot with potatoes in all stages of growth so they could be used for filming.

7. Rich Purnell slips and falls after he finds a way to rescue Mark Watney and tells his boss “I need more coffee.” Donald Glover revealed in an interview that he slipped for real and just got up and continued to act, and the footage was retained in the final edits for the movie.

8. The atmospheric pressure on the Martian surface averages 600 Pa (0.087 psi), about 0.6% of Earth’s mean sea level pressure of 100 kPa (14.69 psi). It is so low that a “fierce storm”, as they put it, would be something akin to a very light breeze messing up your hair. Author Andy Weir admitted this was his biggest inaccuracy in the story. Due to the low air density sound would not travel like it does on Earth and you would have to stand next to someone and scream for them to hear you, providing you could survive the freezing cold temperature, poisonous atmosphere and lack of pressure.

9. In the beginning, it is mentioned that a compromised space suit would cause decompression, giving someone about a minute to live. This is scientifically correct; contrary to popular belief, acute decompression in space or a planet with very low pressure like Mars does not cause the body to immediately explode or expand. Major effects include confusion, loss of consciousness and some subdermal bleeding, but it is generally agreed that a healthy human body can survive one minute in vacuum without life-threatening consequences.

10. The name of the mission is Ares 3, a homage to the Greek god of war, Ares, whose Roman name is Mars. The name of the large ship traveling back and forth between Earth and Mars is Hermes, named after the Greek god who was the messenger and emissary. Hermes was seen as the patron and protector of travelers. The Roman variation for Hermes is Mercury.

11-15 Interesting Facts About The Martian 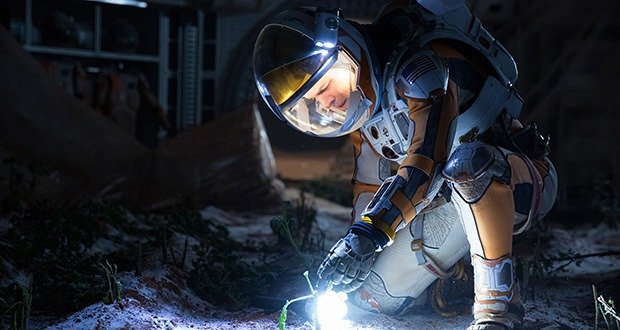 11. The suits in the film use a very complex and actual functioning lighting system.

12. In the novel, Mark Watney has two Masters degrees, one in botany and one in mechanical engineering. In the film, however, he has a PhD in botany and no engineering background is mentioned, although he is shown to have knowledge of engineering and maintenance of the mission equipment.

13. The “cloak-and-dagger” meeting to propose the Rich Purnell Manuever is dubbed Project Elrond after the Council of Elrond in the “Lord of the Rings” series. When this name is questioned, the first character to explain it is Henderson, played by Sean Bean. Bean played Boromir in The Lord of the Rings: The Fellowship of the Ring (2001) and was present during said council.

14. On September 28, 2015 (four days before the film’s scheduled US release), NASA announced that it had found evidence that briny water still flows on the surface of Mars.

15. Much of the research and development on Prometheus (2012) was used on this film, especially the space suits.

16-20 Interesting Facts About The Martian 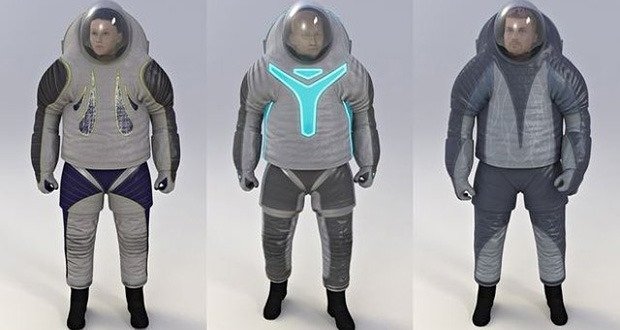 16. When designing the space suits in the movie, the costume designer looked at many of NASA’s actual Mars suits and said they were “exactly like a Buzz Lightyear suit.” From how bulky they were, Ridley Scott even disliked them, so the final designs of the suits were based on images of actual suits but aimed for a more practical approach.

17. Watney digs up a radioactive power source to use for heat. It’s called a radioisotope thermoelectric generator (RTG), and NASA relies on them for long-distance space missions. RTGs are essentially batteries powered by radioactive plutonium-238. As the plutonium naturally decays, it generates heat, and the battery casing turns the escaping warmth into electricity. Plutonium-238 is pretty much impossible to turn into a nuclear weapon, according to the Environmental Protection Agency. Its radiation is not the kind of dangerous, skin-piercing radiation that humans have to worry about (unless it is inhaled). Still, a nuclear battery is dangerous to have around because it’s very hot.

18. One of Mars’s panoramic shots shows Olympus Mons, the largest discovered volcano in the solar system. It is almost three times larger than Mount Everest and covers an area about the size of Missouri.

19. About 20 sets were constructed, which isn’t many in comparison to other films, but they were much more “technical”. To put that in perspective to other Ridley Scott films, he used 70 on Exodus: Gods and Kings (2014) and over 100 on American Gangster (2007).

20. The constellation Orion can be seen in almost every shot of space throughout the entire movie. It is even visible in the background of most scenes through the windows of the hab and Hermes.

21-25 Interesting Facts About The Martian 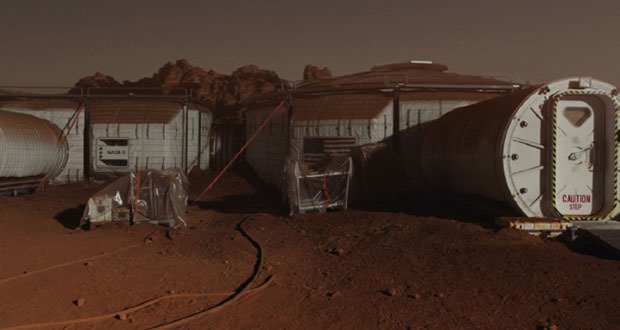 21. The tent-like shelter Watney spends most of his time inside is called a “hab” – short for Mars Lander Habitat. NASA already has working prototypes of Mars habs, complete with oxygenators, water reclaimers, and airlocks to protect astronauts from the nearly airless, radiation-bombarded surface of Mars. The space agency also recently hosted a competition to see who could design the best 3D-printable Mars Hab. Some of the designs might actually end up on the red planet some day.

22. The original cover page of the draft of the script was aboard an actual NASA ship Orion when it launched. On the cover was a drawing of Matt Damon’s character on Mars saying, “I’m gonna science the sh*t out of this planet.”

24. The “steely-eye missile man” is a reference to flight controller John Aaron’s actions following two lightning strikes to the Apollo 12 rocket in its first minute after liftoff. The electrical surge caused numerous problems in the telemetry system of the craft, which if unresolved would force a mission abort. Aaron recognized the telemetry problem as similar to one seen in testing a year before, and advised that the crew to switch the Signal Conditioning Electronics (SCE) system to the auxiliary position. This control was so obscure that neither the Capsule Commander, nor the Mission Commander knew what, or even where it was, but pilot Alan Bean did, following Aaron’s advice. Altering the setting immediately fixed the problem, allowing the mission to continue. Aaron’s quick, calm, and effective response to the crisis earned him the appellation, widely considered to be the highest praise possible within NASA. This can also be a reference to the 1995 movie Apollo 13.

25. The name of the missions to Mars are Ares. In the real life, NASA was developing launch vehicles called Ares I and Ares V, for the crew and cargo of the Constellation Program. The program was cancelled in 2010 and replaced by the Space Launch System; with more lift capability.

AskReaders: What is the biggest movie plot-hole you have ever seen?

14 People Who Died During Consensual Sex