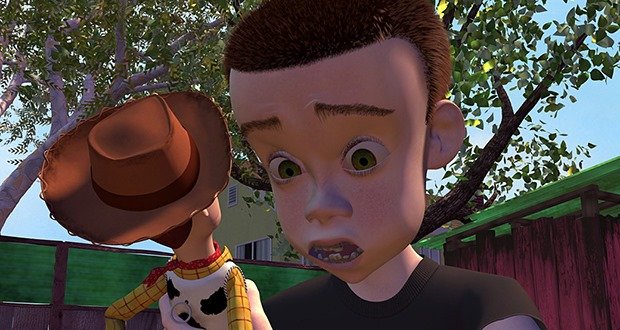 1. Sid Phillips is said to be inspired by a former Pixar employee of the same last name who was known to disassemble toys and use the parts to build bizarre creations.

2. Billy Crystal was originally offered the chance to voice Buzz Lightyear, but declined. After seeing the finished film, he said the decision was the biggest mistake of his career. Upon learning this, John Lasseter telephoned Billy’s house to offer him the role of Mike Wazowski in Monsters, Inc. (2001). Billy’s wife answered the telephone and said “John Lasseter wants to speak to you.” Billy took the telephone from his wife and said “Yes.”

3. This was the first animated film in Oscar history to be nominated for a Best Screenplay Academy Award – Adapted or Original.

5. The animation team perfected the movement of the toy soldiers by nailing a pair of sneakers to a sheet of wood and trying to walk around with them on. 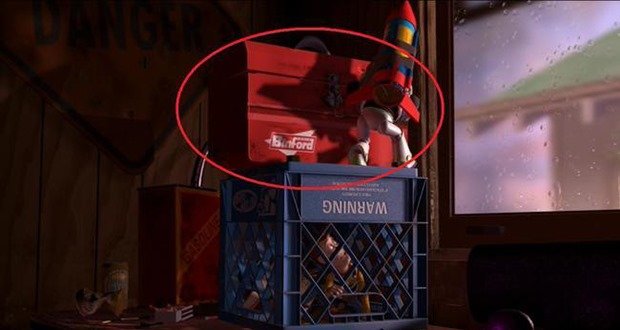 6. The toolbox on top of the milk crate that Woody is trapped in is a Binford, the same type of tool that Tim Allen used on his television show Home Improvement (1991).

7. Early scripts for the film featured a Barbie doll in a prominent role as Woody’s love interest. The original ending sequence, in which Buzz and Woody chase the moving truck, was scripted to have Barbie drive her Corvette off the truck and rescue Woody and Buzz from Sid’s dog, a-la Sarah Connor (Linda Hamilton) in Terminator 2: Judgment Day (1991). Mattel, the company that owns the Barbie character, declined on the basis that they thought the film would be a failure and that they didn’t want Barbie to have a defined personality, preferring to let children imagine Barbie’s personality traits on their own. Thus, Barbie was dropped from the script, and her character was reworked into that of Bo-Peep. When the film proved a huge success, Mattel did allow Barbie to appear in Toy Story 2 (1999).

8. Whenever a character’s eyes blink, they never blink together, but one at a time.

9. Hasbro denied Pixar the use of the name GI Joe when it was informed that a GI Joe doll was going to be blown up by Sid.

10. When Woody is sitting on the bed talking with Slinky, there is a drawing of him on the wall behind them. This is actually an early sketch of the Woody character. 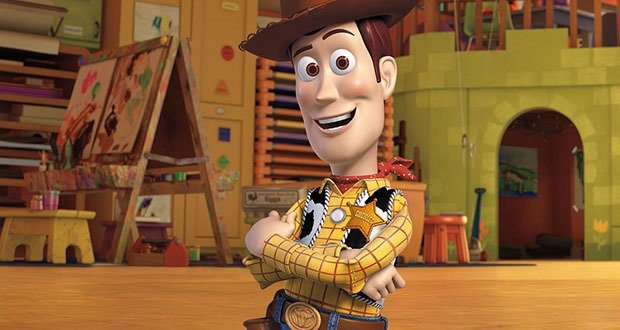 12. Jeffrey Katzenberg often gave notes that he wanted more edge. Pixar presented an early draft of the film to Disney on November 19, 1993. The result was disastrous. The film was deemed unwatchable and John Lasseter recalls simply hanging his head in shame. It presented Woody as a “sarcastic jerk” who was constantly insulting the other toys. Katzenberg took Walt Disney Feature Animation president Peter Schneider in the hall after the screening and asked him why it was bad, Schneider responded that it “wasn’t theirs anymore.” Disney immediately shut down production pending a new script. The story team spent a week on a new script to make Woody a more likable character, instead of the “sarcastic jerk” he had been.

13. The voice of the “Woody” (voiced by Tom Hanks in the movie) was actually provided by Tom’s brother Jim Hanks for the line of subsequent “Woody” action toy figures.

14. In 2013 the original film was remade shot-for-shot with real toys and real people shot for shot. It took Jonason Pauley and his friends 2 years to complete the 82 minute film. 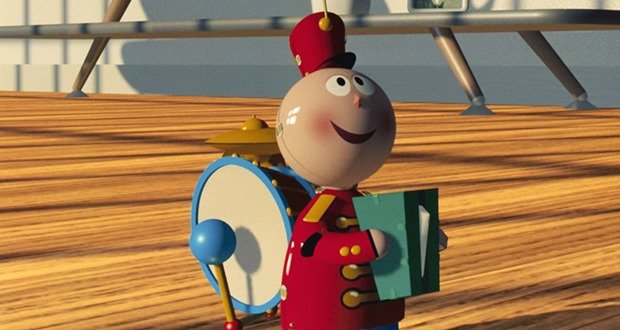 16. Originally the main character was going to be Tinny, the title character in Tin Toy (1988). He would have gotten lost during a family trip and joined up with a sarcastic ventriloquist dummy in a search for a home. Eventually, Tinny was replaced with a toy astronaut named Lunar Larry, which then became Buzz Lightyear. The dummy, meanwhile, was given the identity of a cowboy, eventually becoming Woody.

18. When the soldiers are watching the pile of presents disappear during the birthday party, two silhouette pictures can be seen on the wall. These pictures are available at Walt Disney parks worldwide, and are cut freehand, with no prior sketchwork, using nothing but paper and scissors by the park’s employees.

19. All of the cars in Toy Story have license plate stickers that are dated November 95, the same date the movie was released.

20. Some 3D effects were too complex, or even impossible, to calculate at the time of this film; subtle tricks are used to avoid them. Examples: explosions, thus the viewer doesn’t see Combat Carl’s demise; hair dynamics, so Andy, Sid, and Molly all have short hair while Andy’s mother’s hair is always tied back in a simple-to-model pony tail; and flying water droplets, thus the viewer doesn’t see any liquid when Woody dumps his burning head into a bowl of cereal. 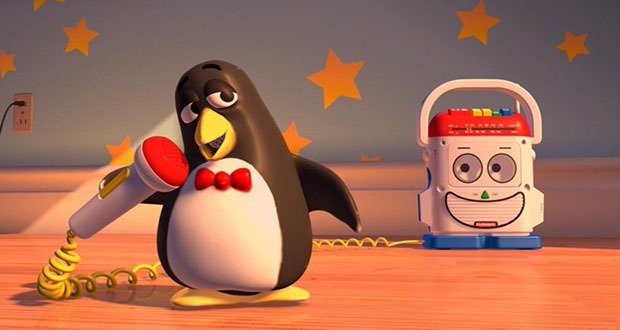 21. Weezy the penguin was originally going to be in this film but was cut during the first draft of the script. He was later brought back in Toy Story 2.

22. The presence of Bo Peep in Toy Story (1995) is a reference to the fairy tale “The Shepherdess and The Sweep” (1849) by Danish author Hans Christian Andersen. His story was also about toys in a children’s room coming to life when no one is looking.

23. When Sarge looks through his binoculars spying on the party guests when he and the other army men investigate the birthday party, you’ll notice that Andy’s friends are actually the same character model of Andy just with different skin tones and different clothes and accessories.

25. First fully computer-generated full-length feature film. Each frame took 4 to 13 hours (depending on the complexity of the shot) of time on a RenderFarm consisting of 87 2-CPU SparcStation 20’s, 30 4-CPU Sparc-Station 20’s and a SparcServer 1000.

AskUs: Why does it take two incomes to maintain a household nowadays?