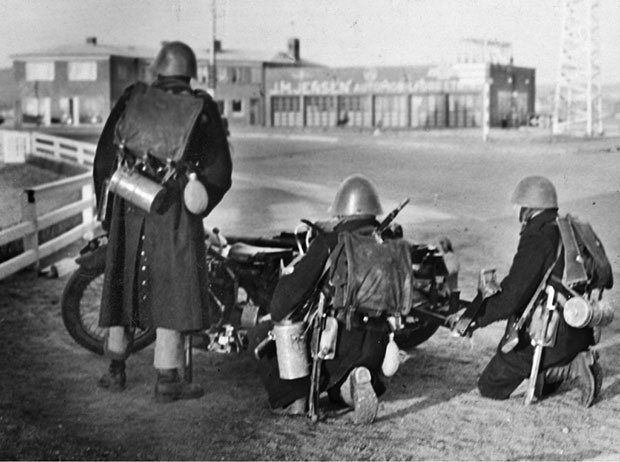 75 years ago Danish soldiers without a chance preparing to engage the invading German army. (1940). The fact of the matter is that the Danish government never gave the orders to fully mobilize the Danish army, so most of the fighting was done by the border guard and some dispersed other units. The Royal Guard put up some stiff resistance around Amalienborg Palace in Copenhagen before the orders to capitulate were issued. Antitank and anti-aircraft units claimed some armored vehicles and aircraft, and a German ship struck a mine and was sunk.

If Denmark had fully mobilized, perhaps it would have suffered the same fate as the Netherlands, which put up more resistance in May 1940 but capitulated after the bombing of Rotterdam by the Luftwaffe. Warsaw was also bombed repeatedly during the German invasion of Poland in September 1939, of course. 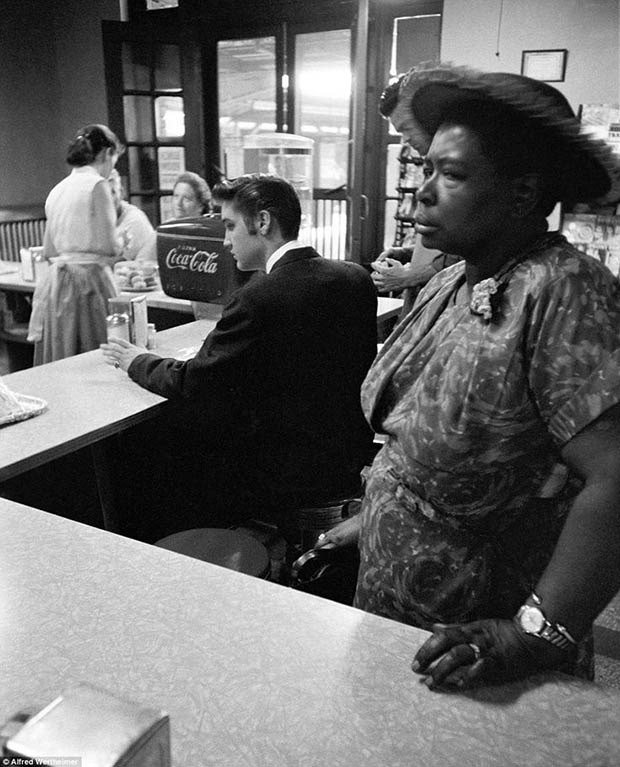 At a segregated lunch counter in a Chattanooga, Tennessee, Elvis Presley waits for his bacon and eggs while a woman waits for her sandwich. She is not permitted to sit. (1956). Photograph by Alfred Wertheimer. 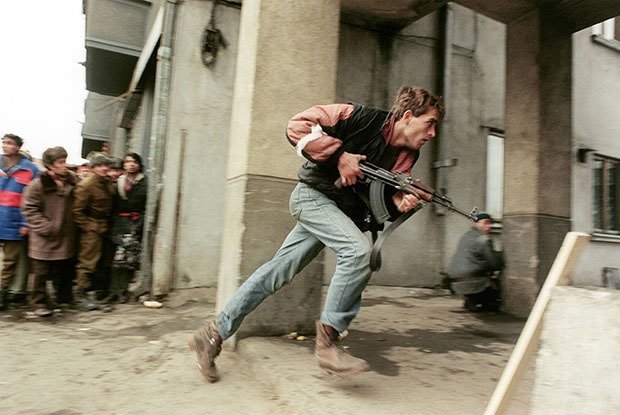 An anti-Communist civilian fighter armed with a Kalashnikov, chases the “terrorist” members of the Securitate (the communist secret police) loyal to Nicolae Ceausescu, during the Romanian Revolution. Downtown Bucharest, December 24, 1989. As the Ceaucescu regime was collapsing, some extremely ugly and terrible things happened. Very few of them were documented. It was one of the most hated authoritarian regimes in the world. The resentment ran very deep, so when the power vacuum suddenly appeared, those resentments boiled over into ghastly atrocities. To this day, if you want to see an older Romanian get very upset, start asking them about the Ceaucescu years. 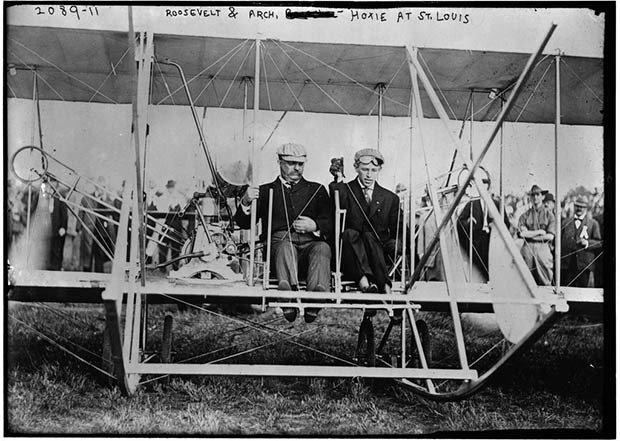 Teddy Roosevelt becomes the first US President to fly in an airplane. (1910). Here is a video footage of the event. From the New York Tribune’s account at the time:

“The aeroplane sped quickly around the field at a height of less than one hundred feet. It made the first lap of a mile and a half before news percolated through the crowd that Mr. Roosevelt was Hoxsey’s passenger. When he swept past the grandstand he leaned forward a bit and waved his hands. The spectators seemed frightened and remained silent, watching the aeroplane intently.

The flying machine sped by and made the turn for the second lap. Hoxsey could be seen to bend over and shout something into Mr. Roosevelt’s ear. The engine cracked regularly, hurling the aeroplane forward at a speed of nearly a mile a minute, but from the ground it looked as though it were travelling much slower because it sailed so evenly and smoothly. There was not a breath of wind, and the engine did not miss fire once.”

The pilot had been warning Roosevelt to hold onto the rail, lest his he interfere with the engines or fall out. “Mr. Roosevelt’s first act after alighting was to shake Hoxsey’s hand vigorously. ‘It was great! First class! It was the finest experience I have ever had,’ he declared. ‘I wish I could stay up for an hour, but I haven’t the time this afternoon.’” 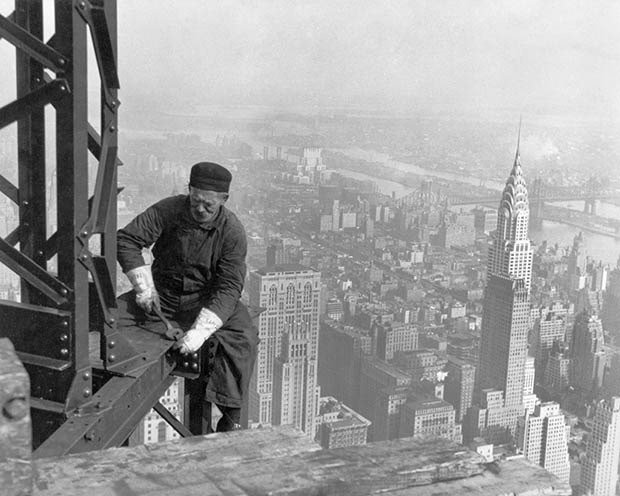 Construction worker tightens bolts on The Empire State Building, with the Chrysler Building seen in the background. (1930). 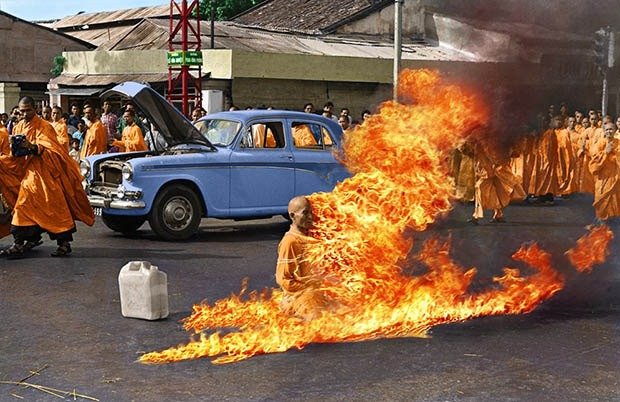 Colourised image of Thích Quảng Đức’s self-immolation to protest the persecution of Buddhists by the South Vietnamese government. 1963. “As he burned he never moved a muscle, never uttered a sound” – David Halberstam of The New York Times. This is one of most powerful images of the 20th century. Based on a book by Karnow, Stanley (1997), Vietnam: A history, New York: Penguin Books, ISBN 0-670-84218-4. Cited in Wikipedia. There were a few other interesting tidbits: 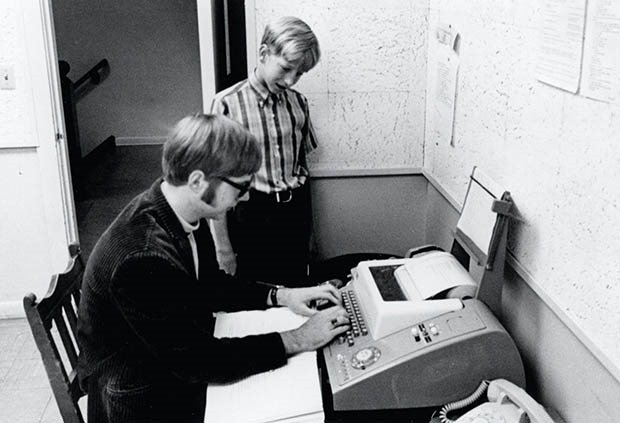 Microsoft founders Bill Gates(13) and Paul Allen(15) connect to a PDP-10 computer at the University of Washington, through a teletype terminal at their Lakeside School in Seattle in 1968. Paul Allen describes meeting Bill Gates at the teletype machine:

One day early that fall, I saw a gangly, freckle-faced eighth-grader edging his way into the crowd around the Teletype, all arms and legs and nervous energy. He had a scruffy-preppy look: pullover sweater, tan slacks, enormous saddle shoes. His blond hair went all over the place. You could tell three things about Bill Gates pretty quickly. He was really smart. He was really competitive; he wanted to show you how smart he was. And he was really, really persistent. After that first time, he kept coming back. Many times he and I would be the only ones there.

Bill came from a family that was prominent even by Lakeside standards; his father later served as president of the state bar association. I remember the first time I went to Bill’s big house, a block or so above Lake Washington, feeling a little awed. His parents subscribed to Fortune, and Bill read it religiously. One day he showed me the magazine’s special annual issue and asked me, “What do you think it’s like to run a Fortune 500 company?” I said I had no idea. And Bill said, “Maybe we’ll have our own company someday.” He was 13 years old and already a budding entrepreneur.

Where I was curious to study everything in sight, Bill would focus on one task at a time with total discipline. You could see it when he programmed—he’d sit with a marker clenched in his mouth, tapping his feet and rocking, impervious to distraction. He had a unique way of typing, sort of a six-finger, sideways scrabble. There’s a famous photograph of Bill and me in the computer room not long after we first met. I’m seated on a hard-back chair at the teleprinter in my dapper green corduroy jacket and turtleneck. Bill is standing to my side in a plaid shirt, his head cocked attentively, eyes trained on the printer as I type. He looks even younger than he actually was. I look like an older brother, which was something Bill didn’t have. – Microsoft’s Odd Couple 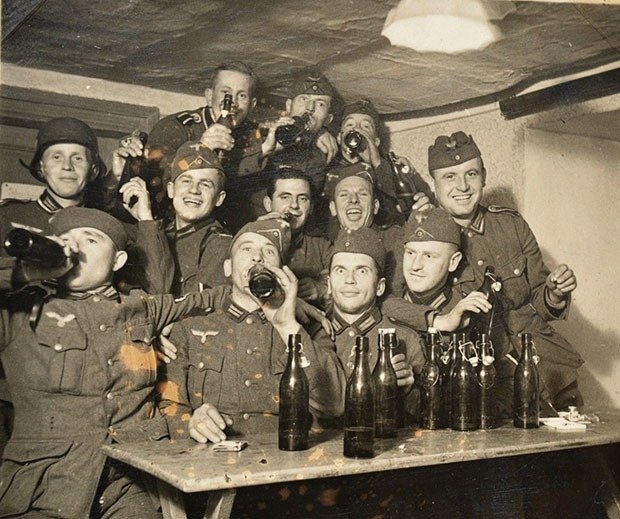 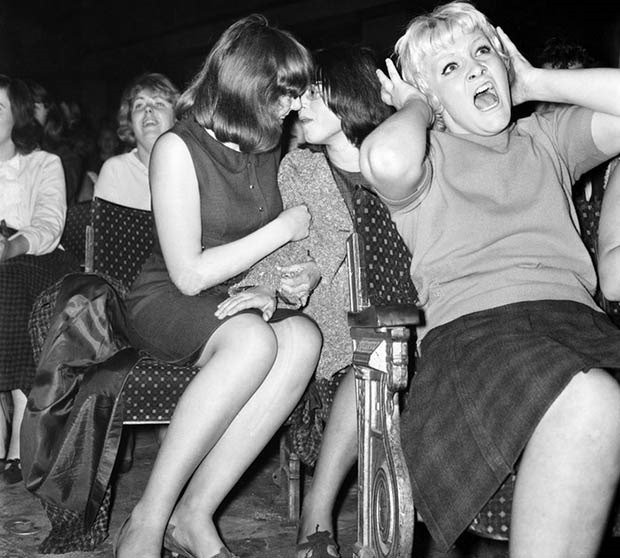 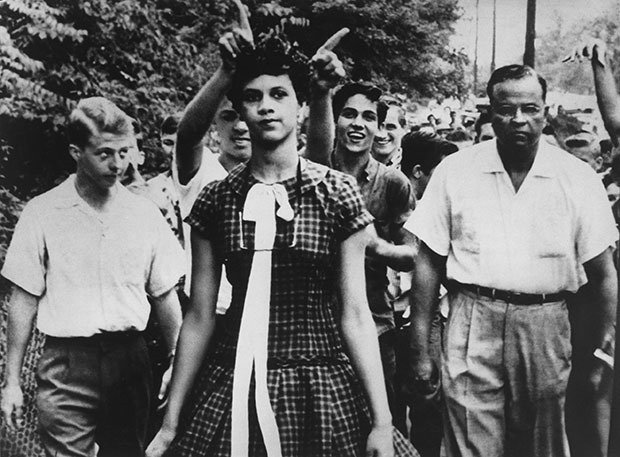 On the morning of September 4, 1957, fifteen-year-old Dorothy Counts set out on a harrowing path toward Harding High, where-as the first African American to attend the all-white school -she was greeted by a jeering swarm of boys who spat, threw trash, and yelled epithets at her as she entered the building.

Charlotte Observer photographer Don Sturkey captured the ugly incident on film, and in the days that followed, the searing image appeared not just in the local paper but in newspapers around the world.

A week later, the girl in the photograph was gone. Her parents -having been told by the school administrators and police officials that they could not guarantee her safety -sent her to live with a relative in suburban Philadelphia, where she could peacefully attend an integrated school. 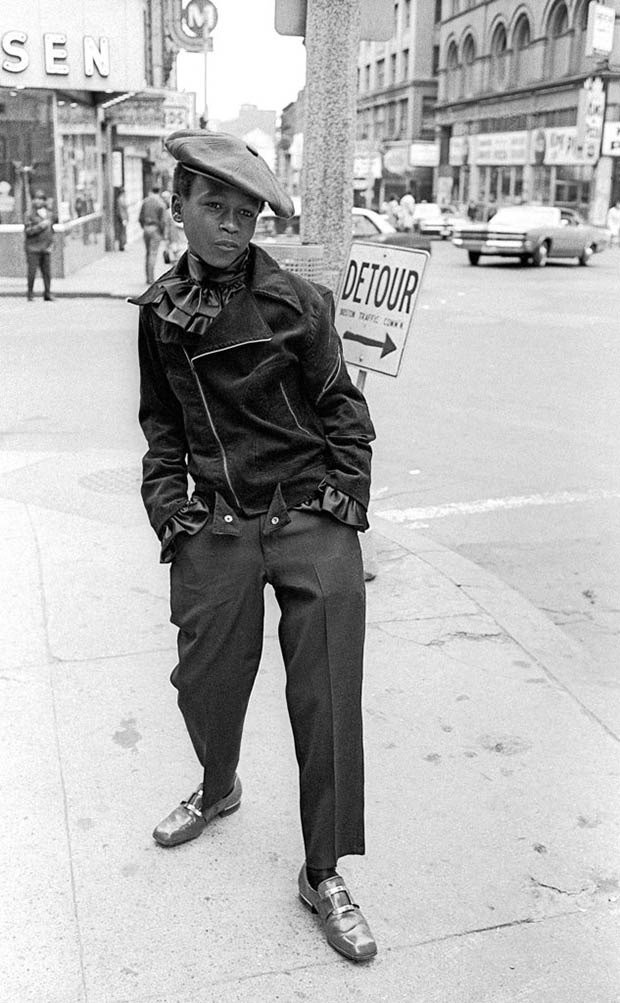 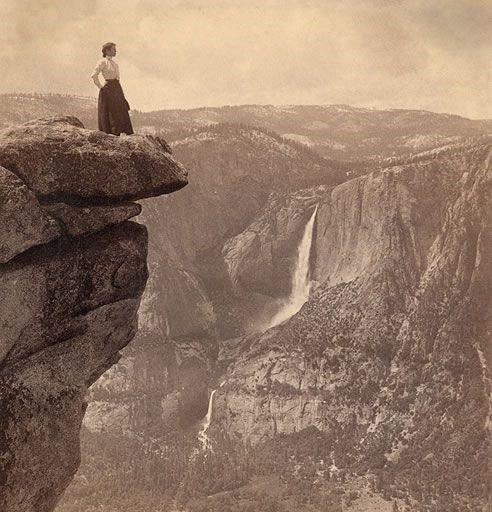 Woman at cliff’s edge with waterfall in the distance (Yosemite Valley, California – 1902). 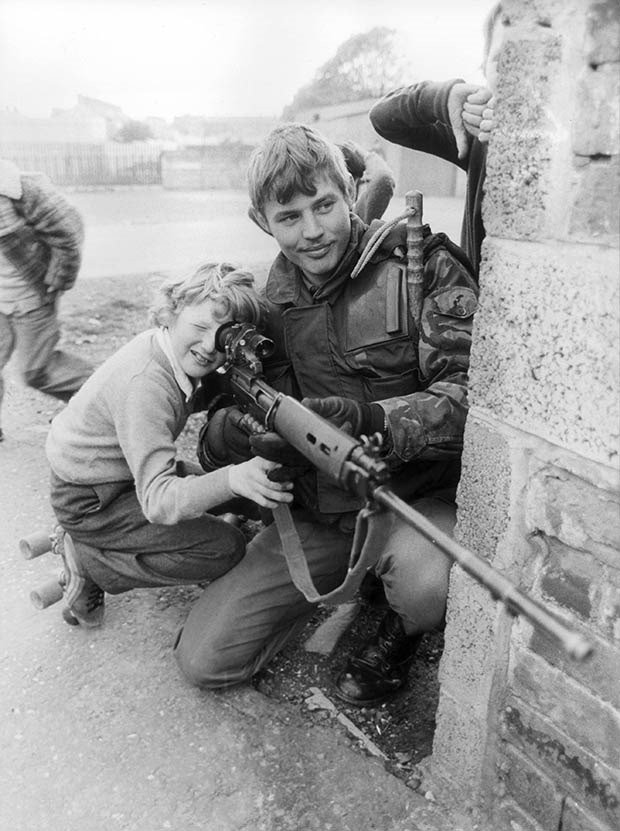 A British soldier lets a young boy look through the sights of his rifle in Belfast, 1981.