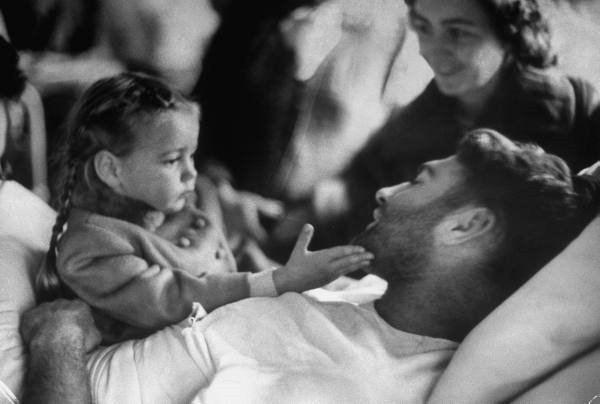 Rescued after 5 days trapped underground, a survivor of the Springhill mining disaster is reunited with his family. Nova Scotia, Canada. (October 1958). The 1958 ‘bump'(underground earthquake) resulted in the collapse of Springhill’s No 2 colliery. 75 miners were killed and 99 trapped. You know your town is dangerous when there are three separate Springhill Mining Disasters. Unfortunately Nova Scotia has a long history of many mining disasters. It was a dangerous trade where the workers really worked in dangerous, sub-human conditions. 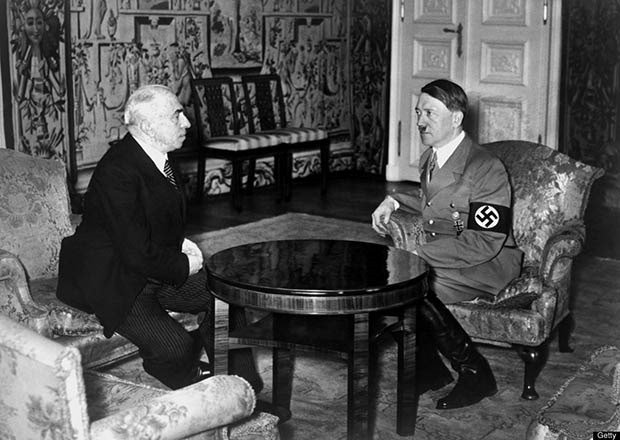 Adolf Hitler informs Czech President Emil Hácha of the imminent German invasion of Czechoslovakia on March 15, 1939 in Berlin. Hácha suffered a heart attack during the meeting, and had to be kept awake by medical staff, eventually giving in and accepting Hitler’s surrender terms.

In the evening of 14 March 1939, Hitler invited President Hácha to the Reich Chancellery in Berlin. Hitler deliberately kept him waiting for hours, while Hitler watched a film. Finally, at 1:30 a.m., on 15 March 1939, Hitler saw the President. He told Hácha that as they were speaking, the German army was about to invade Czechoslovakia. All of Czechoslovakia’s defenses were now under German control following the Munich Agreement in September of the previous year. The country was virtually surrounded by Germany on three fronts.

Hitler now gave the President two options: cooperate with Germany, in which case the “entry of German troops would take place in a tolerable manner” and “permit Czechoslovakia a generous life of her own, autonomy and a degree of national freedom…” or face a scenario in which “resistance would be broken by force of arms, using all means.” By four o’clock, after suffering a heart attack induced by Göring’s threat to bomb the capital, Hácha contacted Prague, effectively “signing Czechoslovakia away” to Germany. French Ambassador Robert Coulondre reported that by half past four, Hácha was “in a state of total collapse, and kept going only by means of injections.” 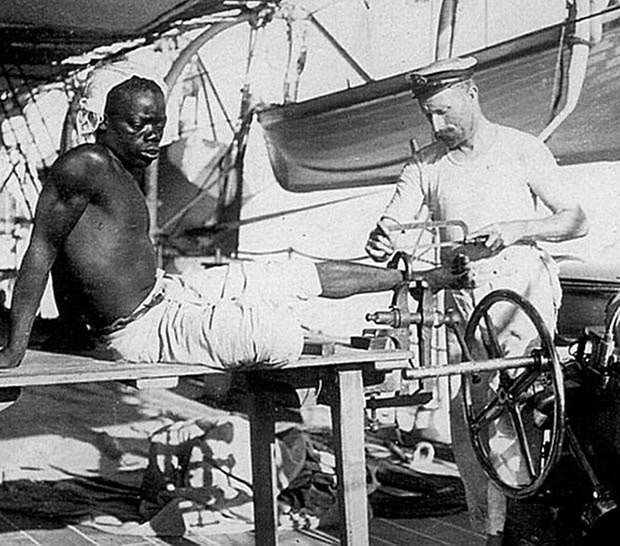 British sailor removing the leg irons off a slave. (Late 1800s/early 1900s). Based on the date I would guess the photograph was taken after an action by the Royal Navy against a force that had not abolished slavery. Something along the lines of the Anglo-Zanzibar War comes to mind. They also patrolled the Atlantic for ships headed to America in violation of slave trade prohibition. They freed thousands of slaves headed towards American plantations. 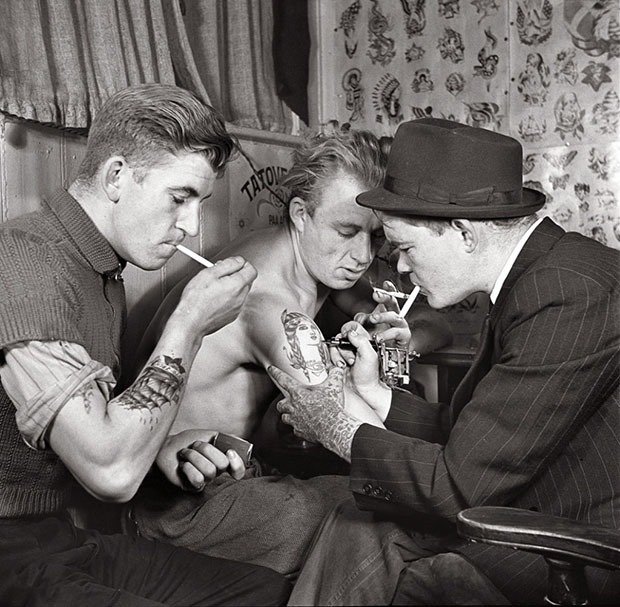 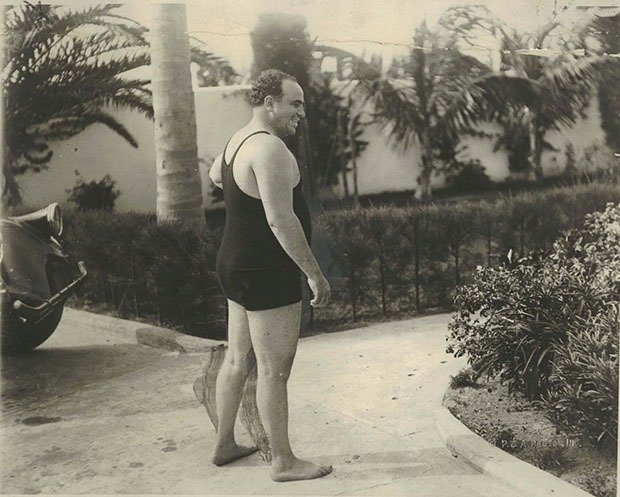 Al Capone in a bathing suit at his Palm Island mansion (1929). 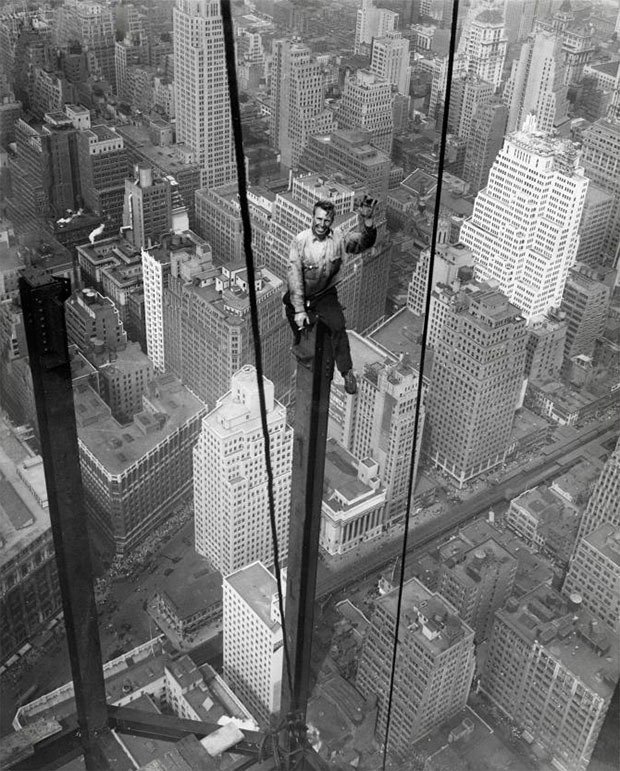 Steel worker Carl Russell sits at 1,222 feet (400 meters) on top of a steel beam casually waving to the cameraman, who had climbed into a crane to be able to take this photo. (Empire State Building, 18 September 1930). There’s a book called High Steel that talks about iron workers at the dawn of the skyscrapers. They had the highest mortality rate of any type of labor at the time. The work paid well, and people were lining up to do it. There was a large Native American population who drove down from Canada each week to New York to work on the buildings. There were also lots of workers from Newfoundland for some reason. 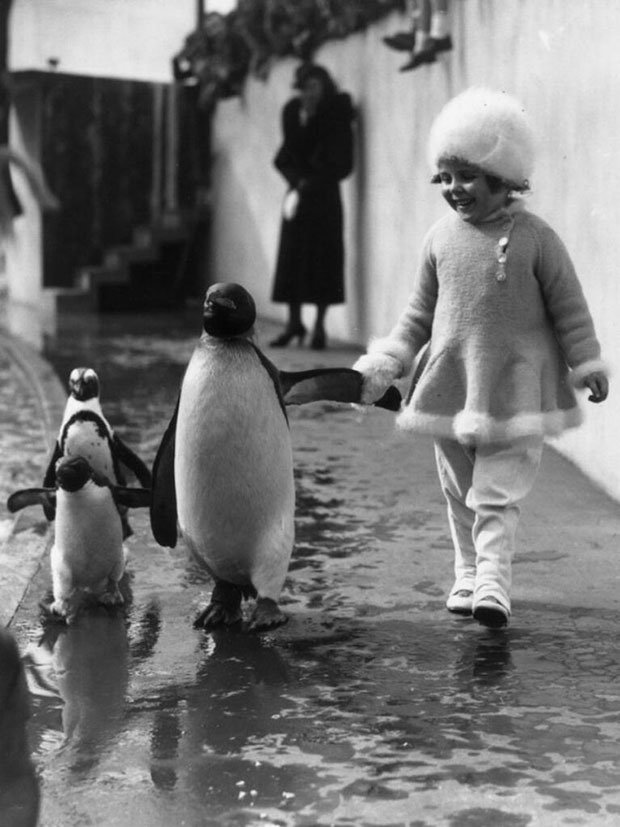 A little girl holds a penguin’s flipper as they walk together around the London Zoo in 1937. 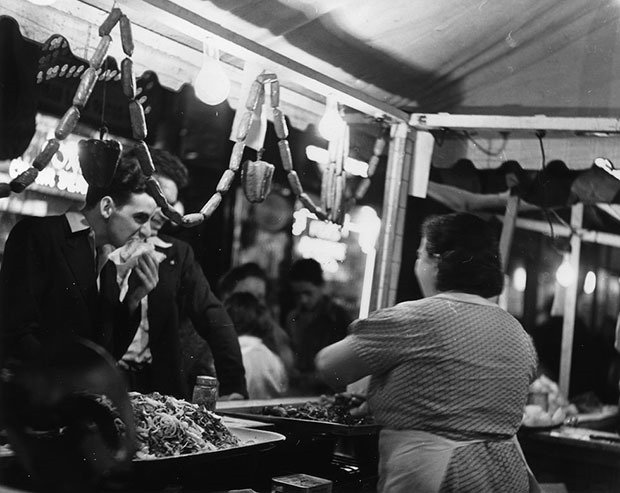 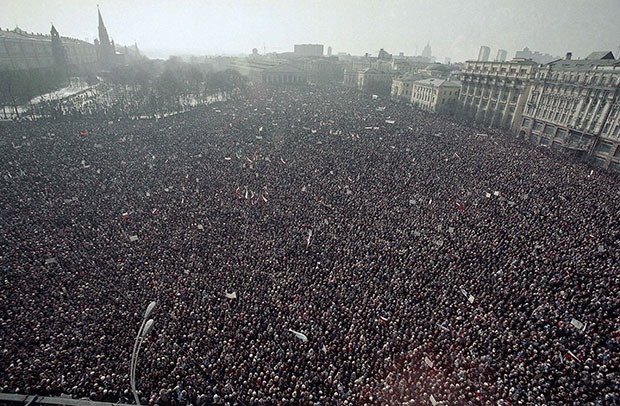 More than 500,000 people pack Moscow’s Manezh Square to demand the resignation of Soviet President Mikhail Gorbachev and his fellow Communists Spring 1991. The demand for his resignation was precisely because of liberal policies. This wasn’t an anti-communist march, and never did even a plurality of the residents of the USSR support the dissolution of the state. The march was anti-government, not anti-USSR, or anti-communist. The fall of the Soviet Union was arguably largely due to the increasingly revisionist policies from Khrushchev onwards. Also in the 1991 USSR referendum most voted for the preservation of the USSR. 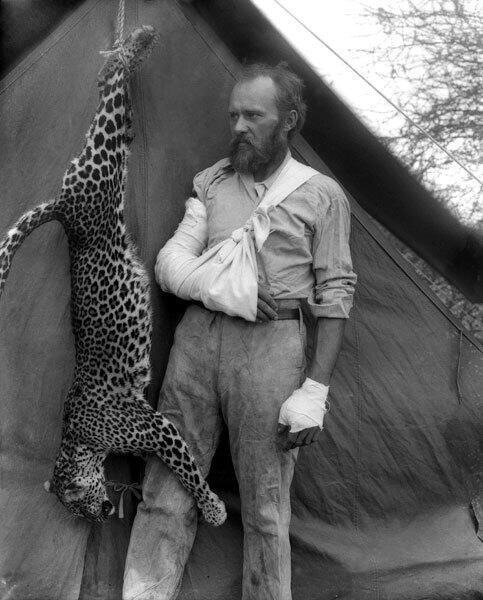 Carl Akeley poses with the leopard he killed with his bare hands after it attacked him. (1896).

When his attempts to pull his hand out of the leopard’s jaws only made the creature bite down harder, Akeley, locked in a life or death fistfight punched his fist further into the leopard’s mouth. The leopard gagged, Akeley pulled his hand out, and then the slammed it to the ground, and jumped on it with both knees, crushing it to death. Akeley, bleeding profusely from horrific wounds on both hands, then picked up the leopard (despite a shattered hand), threw it over his shoulder, walked back to camp with it, and taxidermied it for a museum exhibit. 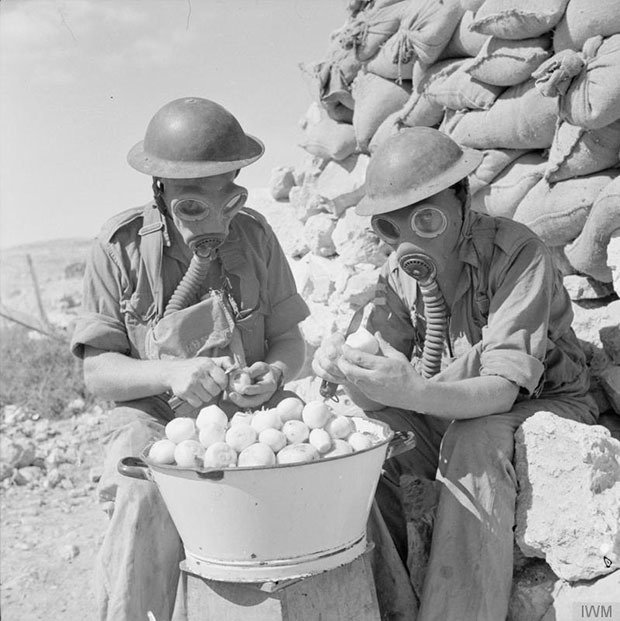 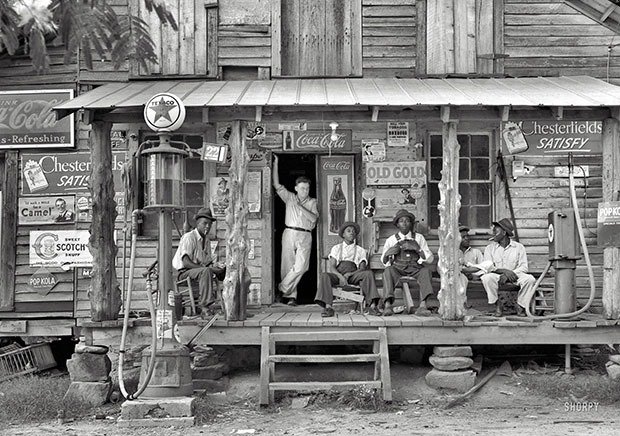 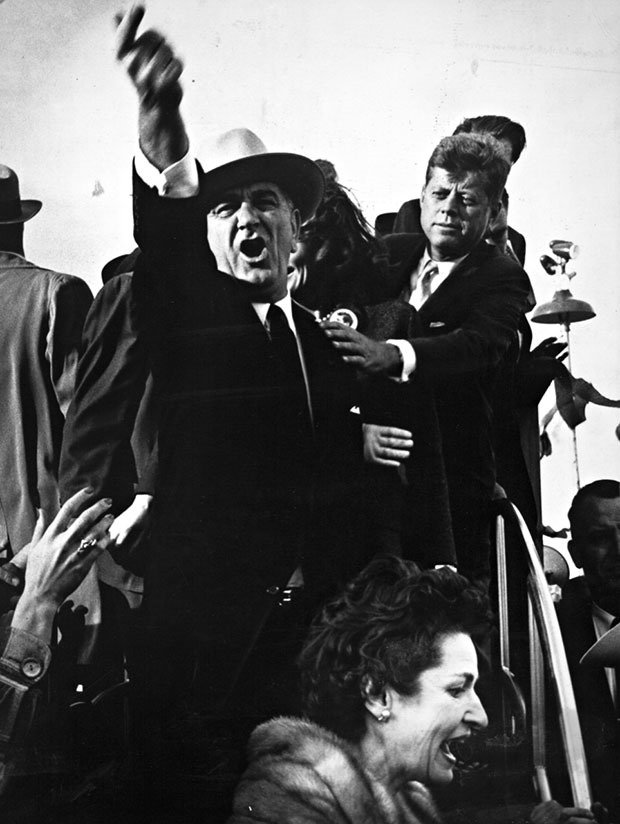 Lyndon B. Johnson yelling at the pilots of a nearby plane to cut their engines so that John F. Kennedy could speak. Kennedy is seen trying to calm him down. This was taken during the 1960 presidential campaign in Amarillo, Texas.

In the fall, Johnson campaigned intensely, conducting a memorable train ride through the South. He also pressed for a joint appearance of the Democratic candidates somewhere in Texas. They arranged the meeting at the airport in Amarillo, where campaign advance men stopped all air traffic during the brief ceremonies so that the candidates could address the crowd. But they had not counted on the Republican-leaning airline pilots, who deliberately ran the engines of their planes in order to drown out the speakers. At the close of the ruined appearance, a photographer snapped a concerned Kennedy placing his hand on Johnson’s shoulder, trying to calm his angry, gesticulating running mate. Then, just before the election, Lyndon and Lady Bird Johnson were jeered and jostled by a hostile crowd of right-wingers in Dallas, Texas.

Kennedy made light of the noise during his speech, quipping “That is d*ck coming in” (Richard Nixon was also campaigning in Texas that day) and “They can’t stop the truth anyway. I don’t care how much that engine warms up.”