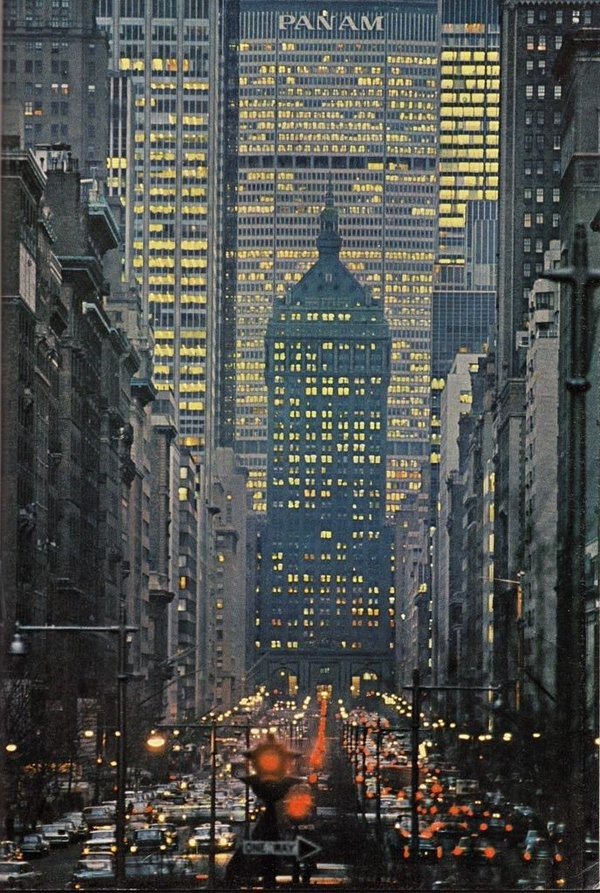 Park Avenue, NYC. 1964.  It’s funny. Things at the time that seem permanent all eventually go away. Pan Am at the time was king of the world and almost defined style and class at the time. Now, 50 years later, it doesn’t even exist. For reference, google street view.  A little bit of trivia on the Helmsley Building which is the building in front of the Pan Am building in the posted photo. When Harry Helmsley purchased the building sometime before this photo was taken it was the New York Central Building and he was required to change the name. He did so by just having the C chiseled into a G and the T chiseled into an E so the name became the New York General Building. 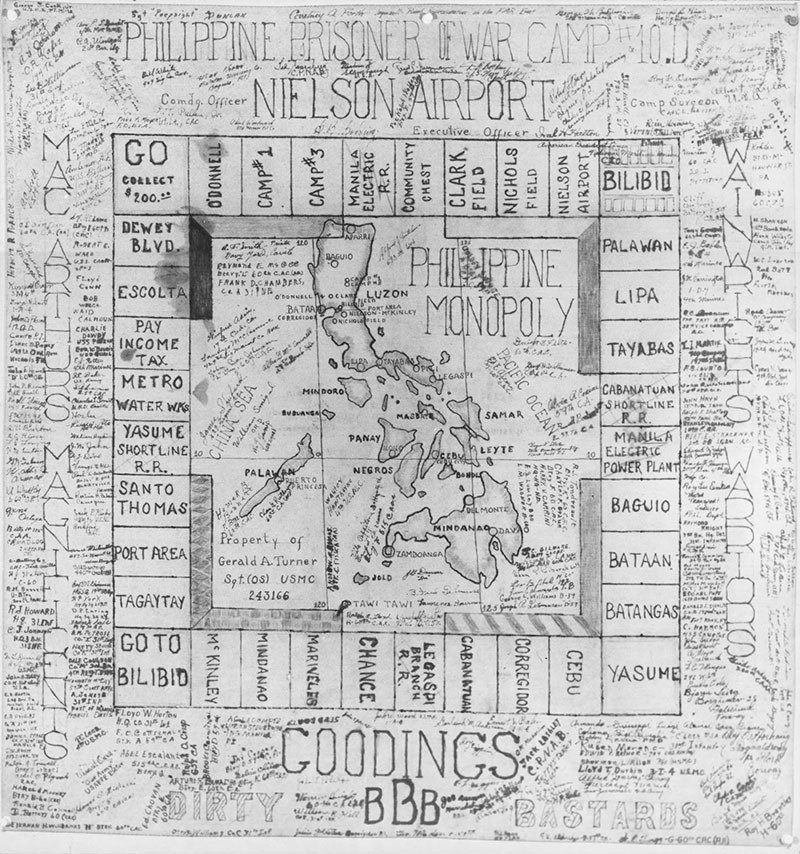 This is a Monopoly board created, and signed by many of the WW2 PoWs  held captive in the Philippines by the Japanese. 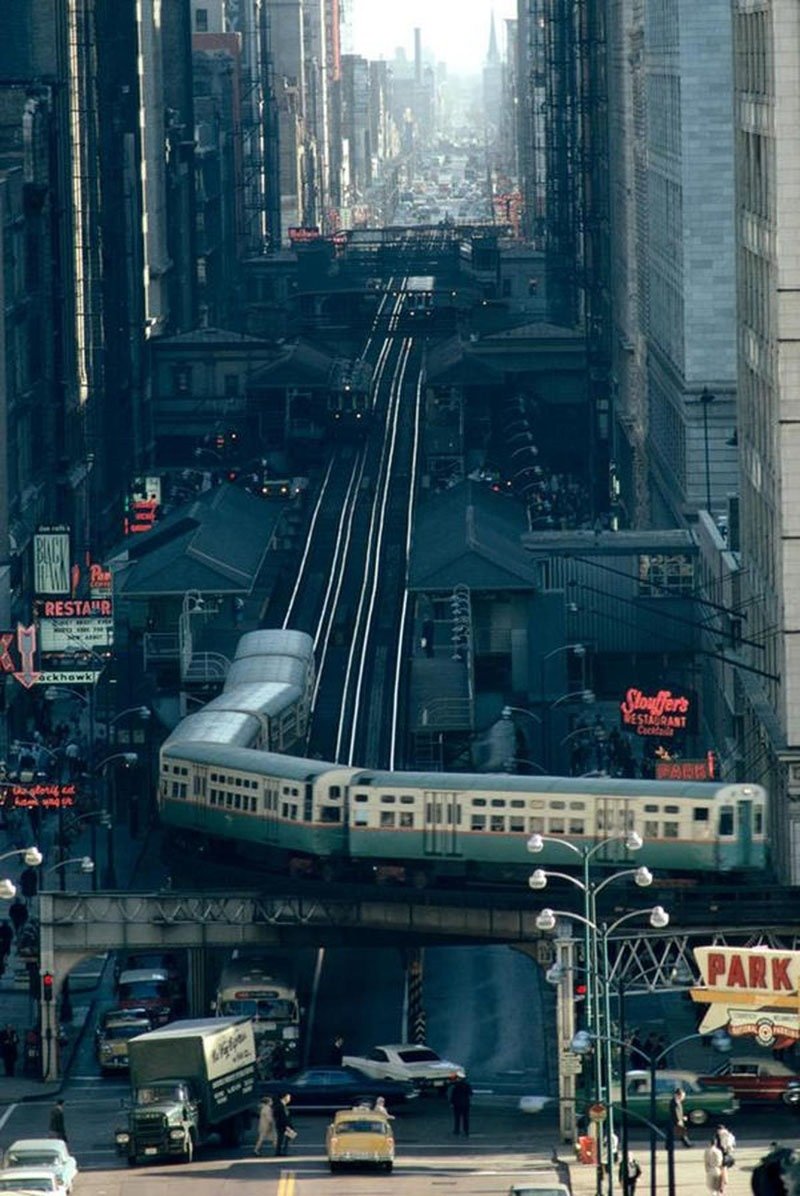 The streets of Chicago in 1967. Chicago was the economic hub of the great westward expansion and basically grew out of railroads and industry, especially meat processing. For a time Chicago had far more money and people coming in then it could expand organically to fit so it really planned itself to become a major metropolis to rival New York. It was a petri dish for the modern subburb, electrical grids, water works, public transportation, and even skyscrapers. 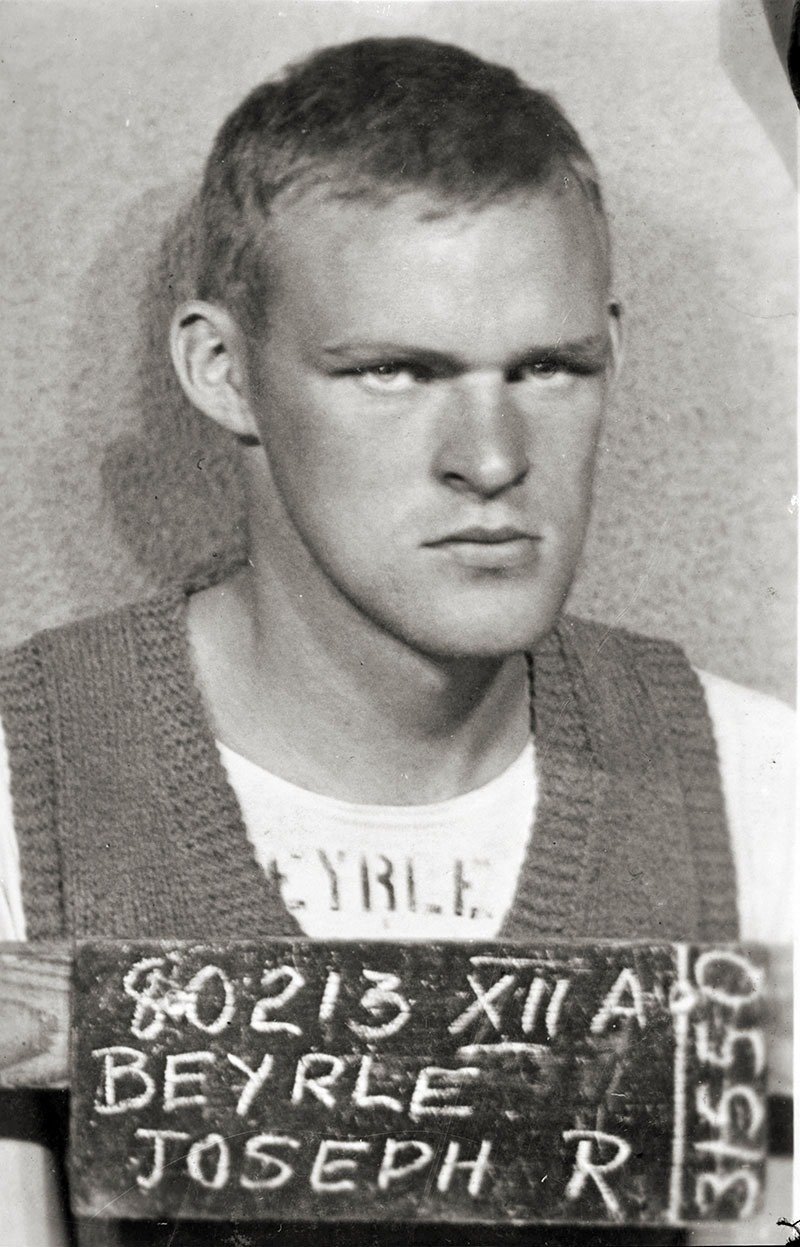 Prisoner identification photograph of U.S. Army POW Staff Sgt. Joseph R. Beyrle taken in Stalag XII-A. Beyrle is thought to be the only American soldier to have served with both the U.S. Army and Soviet Army during World War II, 1944.

On 6 June 1944, D-Day, the Douglas C-47 Skytrain transport aircraft Beyrle was in came under enemy fire over the Normandy coast, and he was forced to jump from the exceedingly low altitude of 120 meters. After landing in Saint-Côme-du-Mont, he lost contact with his fellow paratroopers, but succeeded in blowing up a power station before being apprehended by the Germans a few days later. Over the next seven months, Beyrle was held in seven different German POW camps. He escaped twice, only to be recaptured each time. Beyrle was taken to the Stalag III-C POW camp in Alt Drewitz bei Küstrin in Neumark, state of Brandenburg (now Drzewice, Lubusz Voivodeship, Poland), about 50 mi (80 km) east of Berlin where he escaped in early January 1945. Knowing the Soviets were advancing much quicker from the east than the Americans, British and others were from the west, Beyrle headed eastward. Encountering the Soviet 1st Guards Tank Army in the middle of January, he raised his hands, holding a pack of Lucky Strike cigarettes, and shouted in Russian, “Amerikansky tovarishch!” (“American comrade!”). Beyrle was eventually able to persuade the battalion’s commander, who, incidentally, was the legendary Alexandra Samusenko, possibly the only Soviet female tank officer with the rank of Guards Captain, to allow him to fight alongside the unit on its way to Berlin. Thus, Beyrle began his month-long stint in a Soviet tank battalion, where his demolitions expertise was appreciated. Beyrle’s new battalion was the one that freed one of his former camps, Stalag III-C, at the end of January. But, in the first week of February, he was wounded during an attack by German Luftwaffe Stuka (Junkers Ju 87) dive bombers. He was evacuated to a Soviet hospital in Landsberg an der Warthe (now Gorzów Wielkopolski, in Poland), where he received a visit from Soviet Marshal Georgy Zhukov, who, intrigued by the only non-Soviet in the hospital, learned his story through an interpreter, and provided Beyrle with official papers in order to rejoin the American forces. Joining a Soviet military convoy, Beyrle arrived at the U.S. embassy in Moscow in February 1945, only to learn that he had been reported by the U.S. War Department as killed in action on 10 June 1944 on French soil. A funeral mass had been held in his honor in his hometown of Muskegon, Michigan and his obituary was published in the local newspaper. Sgt. Beyrle returned home to Michigan on 21 April 1945. He would marry in 1946, coincidentally, in the same church and by the same priest who held his funeral mass two years earlier. Beyrle died in 2004 at the age of 81. His son John Beyrle would serve as the United States Ambassador to Russia from 2008 to 2012. 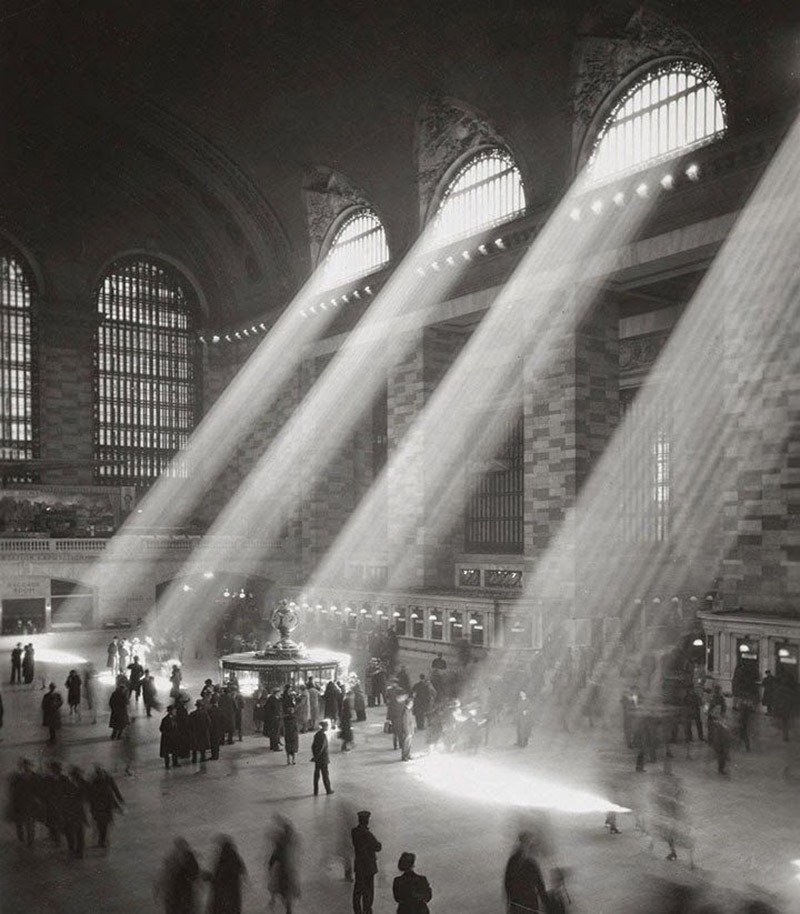 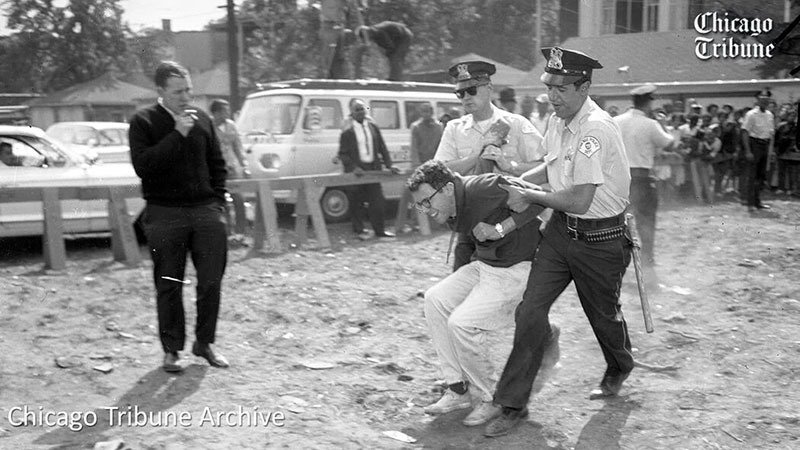 Bernie Sanders carried away by police during protest, 1963.

In the mid-1960s, protests over segregation in the area raged over mobile classrooms dubbed “Willis Wagons,” named for then-Chicago Schools Superintendent Benjamin Willis. The phrase “Willis Wagons” was believed to have been coined in 1963 by Rosie Simpson, a leader in education reform in Chicago. She was describing the trailers that Willis set up for black children instead of sending them to white schools. Sanders was arrested Aug. 12, 1963, and charged with resisting arrest. He was found guilty and fined $25. 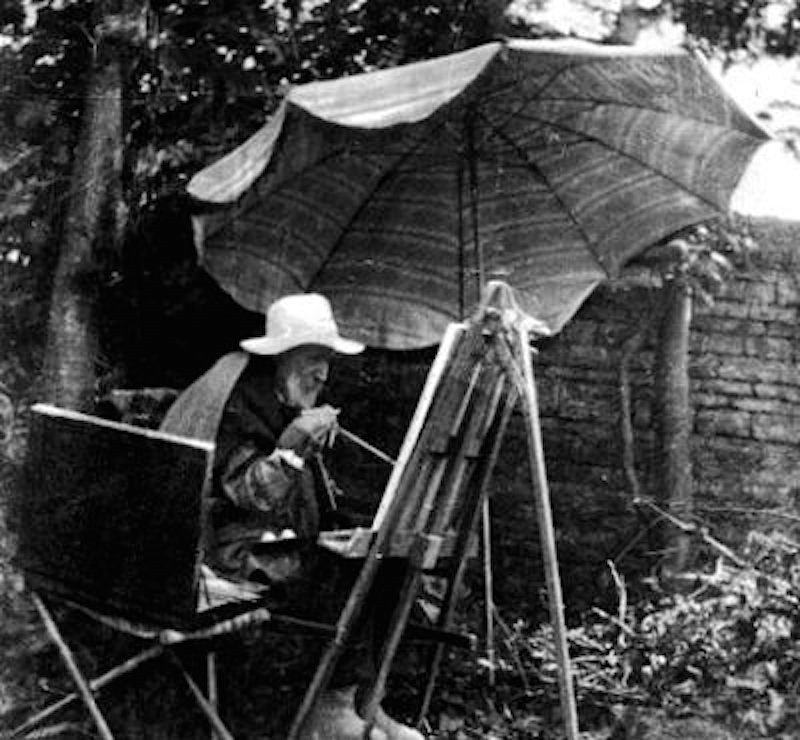 Arthritis-ridden Renoir painting flowers at his garden, circa 1910’s. In his later years, due to his arthritis, he had his fingers tied with rubber bands in order to hold his brushes, as seen in the photo.

The commander of an M48 Patton looks through his lens, 1967. 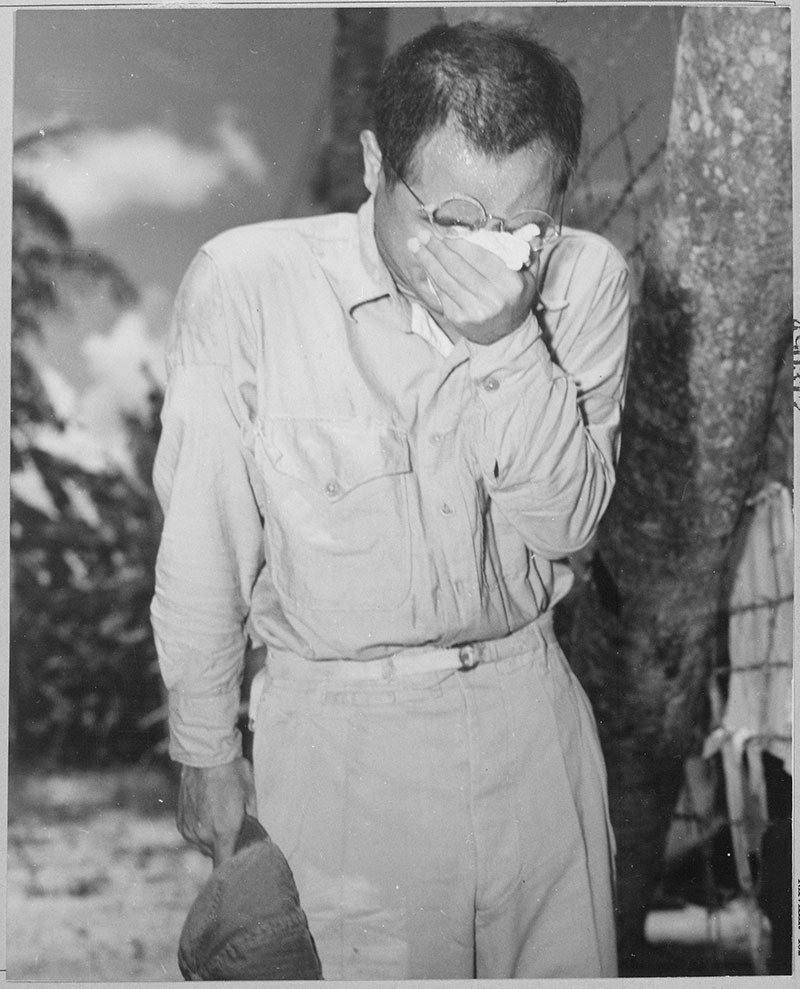 Japanese Prisoner of War at Guam, with bowed head after hearing Emperor Hirohito make announcement of Japan’s unconditional surrender. Aug. 15, 1945. The mindset of the average Japanese citizen at this time was that the Emperor was a god. The Imperial Family is directly descended from the sun god Amaterasu. Japan had a very aggressive propaganda campaign highlighting that fact for decades and silenced any dissent. Hirohito wasn’t like Roosevelt or Hitler or Churchill, frequently addressing his people over the radio. For almost everyone in Japan, this surrender would be literally the first (and perhaps only, I’m not sure how this changed post war) time they ever heard the voice of their emperor. The only time your god ever speaks to you and its to announce that your nation has been defeated. 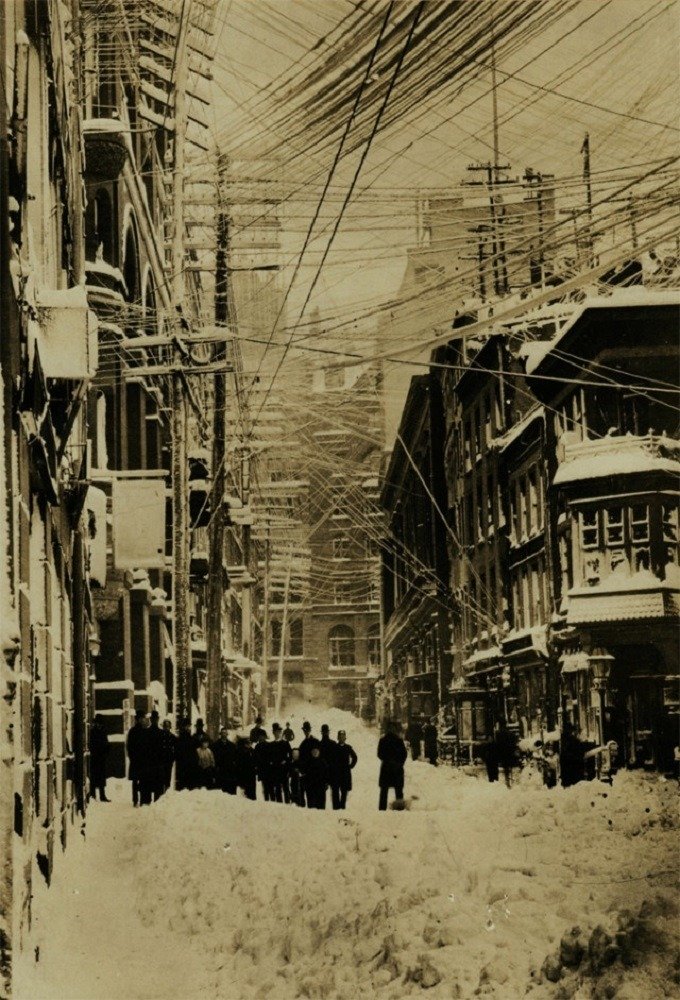 Blizzard of 1888 in New York City. 200 dead in NYC. 200 dead in other locations. Wires broke from weight of ice. March 11-14, 1888. This blizzard is actually one of the reasons New York buried most of its wires. The government saw a problem, allocated money to fix it, and now it isn’t a problem. It was also an impetus for the subway system. The trains couldn’t run for weeks with the drifts, so they realized the necessity of underground transportation. 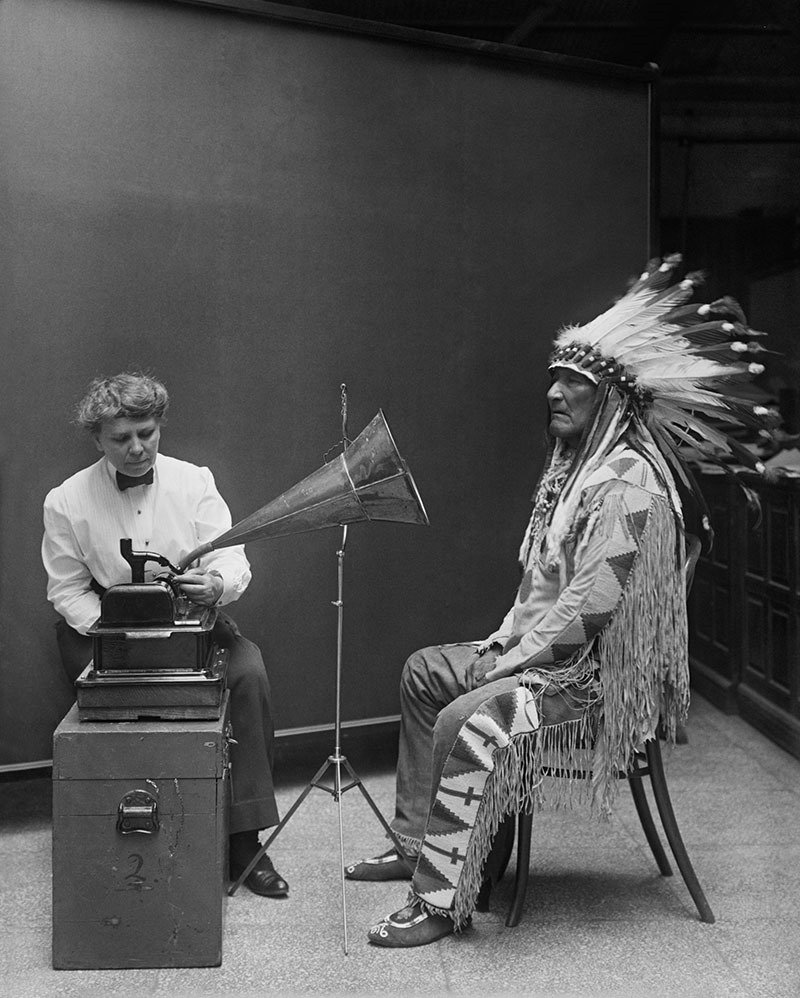 Mountain Chief, a Blackfoot Chief, making a phonographic record at the Smithsonian, 2/9/1916. 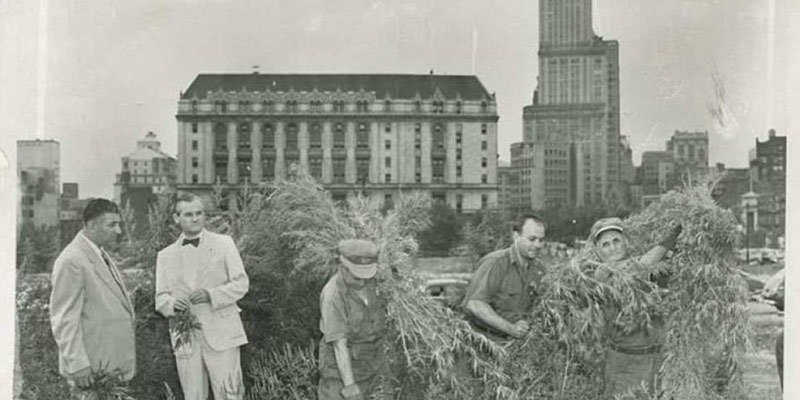 If you were to venture into Brooklyn in 1951, You’d run into fields of seven foot Marijuana plants sprouting anywhere you looked from Cobble Hill to East New York. Heading north, you’d find even taller plants growing in underpasses in the Bronx or Queens. The weed was growing with “lush impudence.” If you live in any of the Brooklyn neighborhoods where pot flourished, it’s likely your apartment building stands where marijuana leaves once grew. The area where Brooklyn’s Civic Center now stands was one of the biggest “farms.” Weed also ran wild in the shadow of the Brooklyn Federal Building, seen here. To take care of the persistent weed popping up in all of the city’s cracks and crevices, the city’s Sanitation Department formed the “White Wing Squad.” The special unit, who were responsible for hacking up and incinerating the drug. 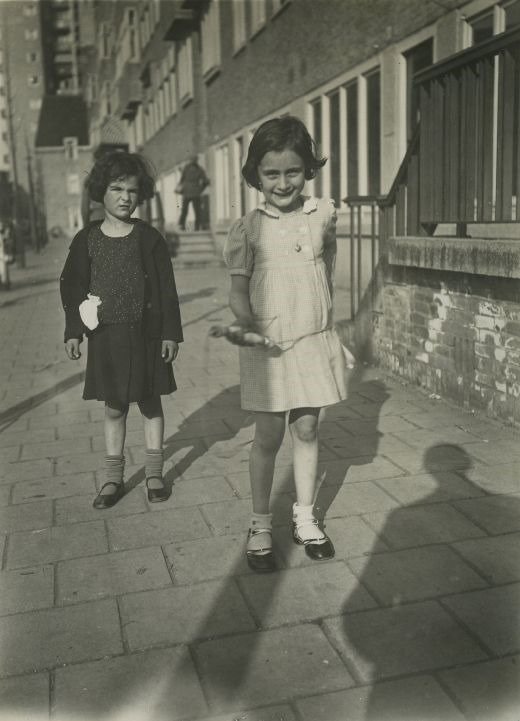 Anne Frank holding a jumping rope next to her friend, Sanne Ledermann, on a sidewalk in Merwedeplein, Amsterdam, 1935.