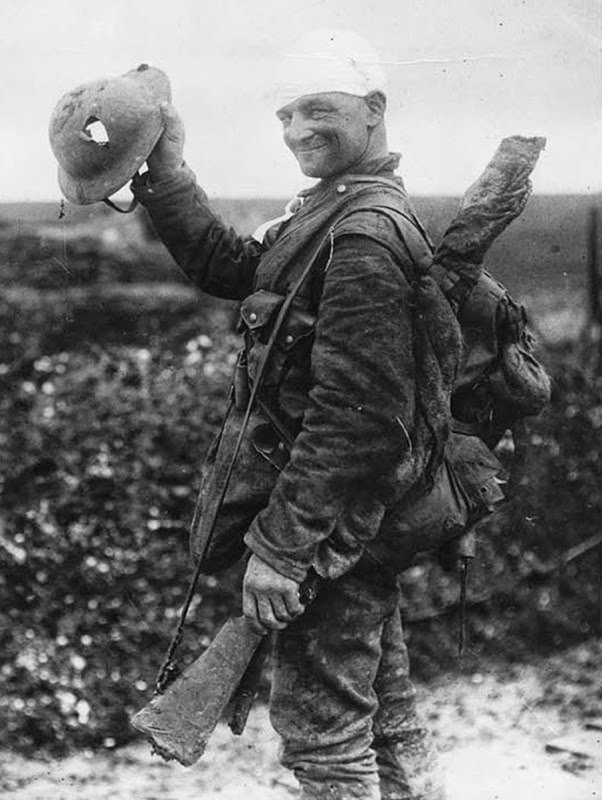 Lucky British soldier shows off his damaged helmet, 1918. His smile says it all. Back then the main reason for wearing a helmet wasn’t protection from gunfire, but from shrapnel from exploding artillery shells. This photograph would have made ideal propaganda material. In 1915, 65% of British casualties were head injuries from artillery fire.

Original caption reads: “Saved by shrapnel helmet. This soldier, on the way to hospital after being bandaged at Field Dressing Station, shows the helmet which saved his life.”

During the first couple of years of World War I, none of the combatants provided steel helmets to their troops. Soldiers of most nations went into battle wearing cloth caps that offered no protection from modern weapons. The huge number of lethal head wounds that modern artillery weapons inflicted upon the French Army led them to introduce the first modern steel helmets in the summer of 1915. The first French helmets were bowl-shaped steel “skullcaps” worn under the cloth caps. These rudimentary helmets were soon replaced by the Model 1915 Adrian helmet, designed by August-Louis Adrian. The idea was later adopted by most other combatant nations. 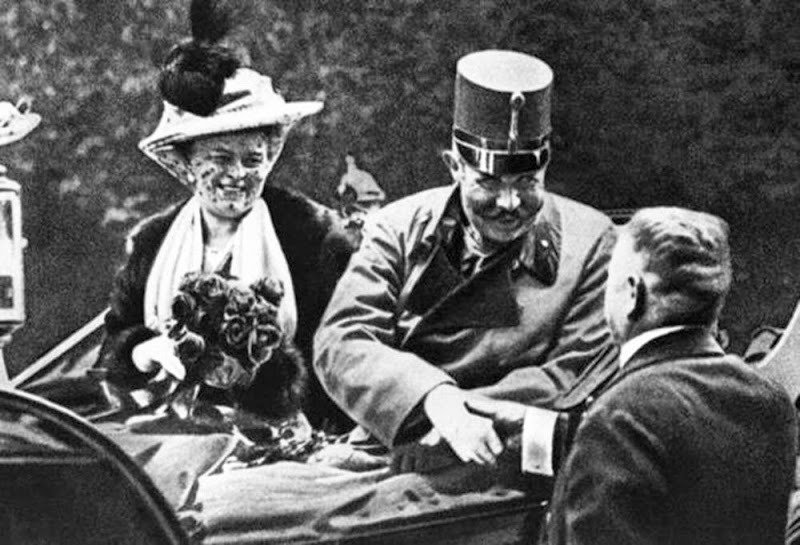 Archduke Franz Ferdinand with his wife on the day they were assassinated by Gavrilo Princip, 28 June 1914.

The archduke traveled to Sarajevo in June 1914 to inspect the imperial armed forces in Bosnia and Herzegovina. The date scheduled for his visit, June 28, coincided with the anniversary of the First Battle of Kosovo in 1389, in which medieval Serbia was defeated by the Turks. Despite the fact that Serbia did not truly lose its independence until the Second Battle of Kosovo in 1448, June 28 was a day of great significance to Serbian nationalists, and one on which they could be expected to take exception to a demonstration of Austrian imperial strength in Bosnia.

June 28 was also Franz Ferdinand’s wedding anniversary. His beloved wife, Sophie, a former lady-in-waiting, was denied royal status in Austria due to her birth as a poor Czech aristocrat, as were the couple’s children. In Bosnia, however, due to its limbo status as an annexed territory, Sophie could appear beside him at official proceedings. 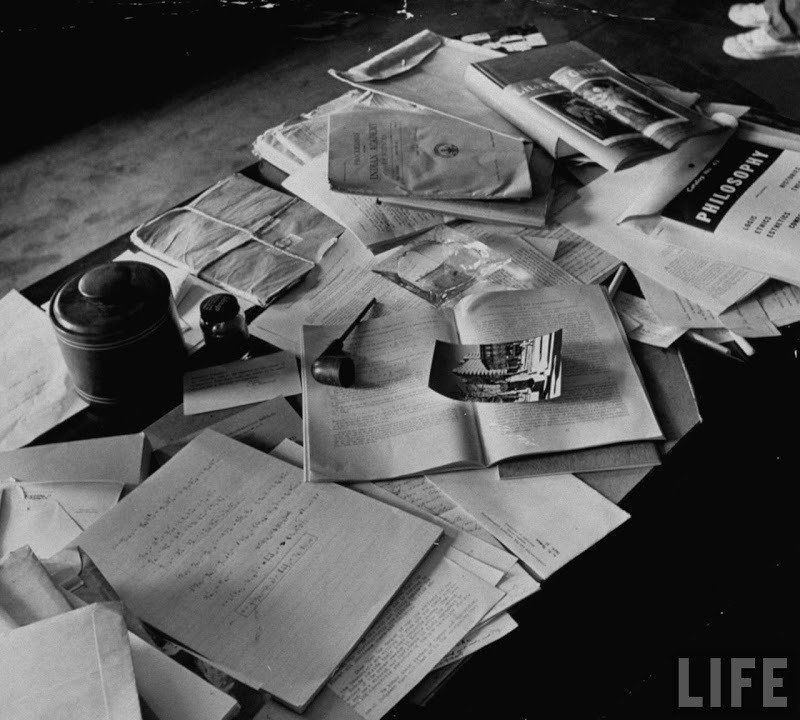 Einstein’s desk photographed a day after his death. This photo taken mere hours after Einstein died on April 18, 1955 in Princeton, New Jersey. . His funeral and cremation were intensely private affairs, and only one photographer managed to capture the events of that extraordinary day: LIFE magazine’s Ralph Morse.

Armed with his camera and a case of scotch — to open doors and loosen tongues — Morse compiled a quietly intense record of a 20th-century icon’s passing. But aside from one now-famous image — of Einstein’s office, exactly how he left it, taken hours after his death — the pictures Morse took that day were never published. At the request of Einstein’s son, who asked that the family’s privacy be respected while they mourned, LIFE’s editors chose not to run the full story, and for more than five decades Morse’s photographs lay in the magazine’s archives, forgotten. 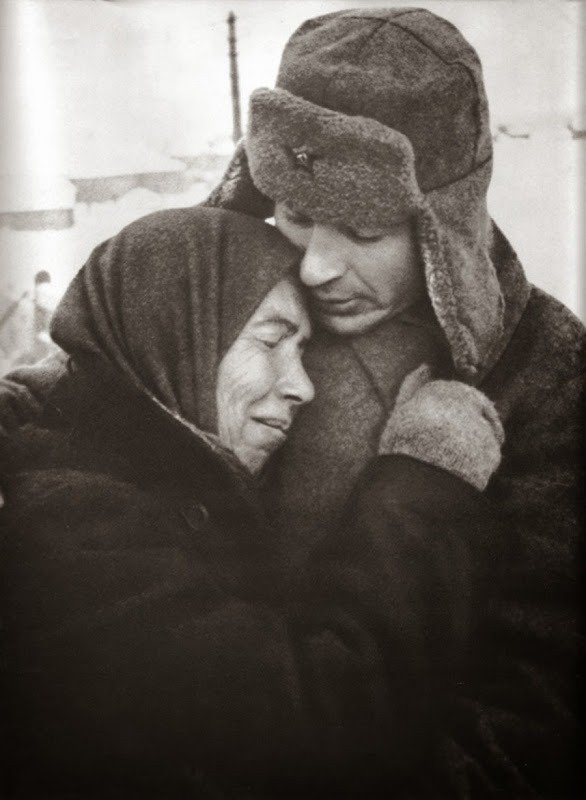 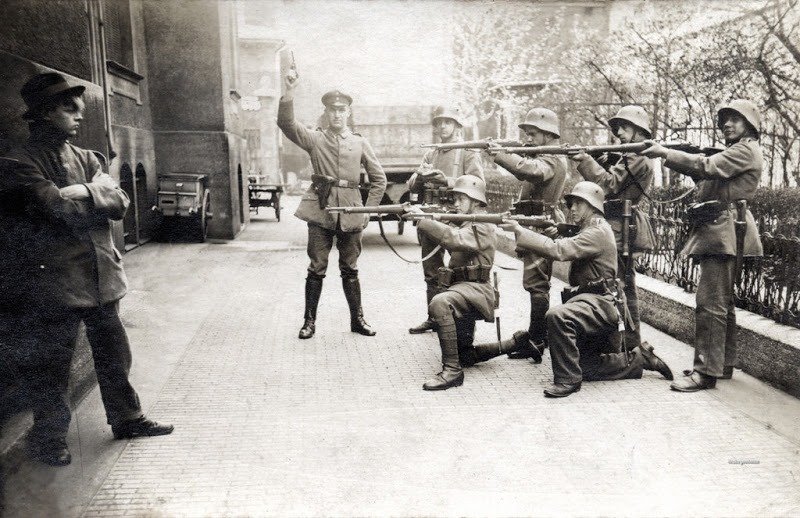 Execution of a German Communist in Munich, 1919. On the reverse of this photograph was written: “Zum ewigen Andenken an den Spartakisten Krieg in München Bayern.” – As an eternal memento of the Spartacist War in Munich, Bavaria.

Some say it’s a real situation some say it’s a staged photo. It’s most likely was a staged event due to the various discrepancies in the photo. This does not look like an actual execution. They are too close to the wall to shoot without ricocheting and they’re not aiming or shouldering their guns in such a way that would indicate a readiness to fire. The guy on the far right is the biggest giveaway. His stance is all wrong for shooting, his grip on the rifle is incorrect, and he’s looking at the camera. Also the officer is looking directly into the camera. Two of the guys in the back rank appear to be unfamiliar with their Mauser 98’s. If he fires it, the guy on the right is going to hurt himself.

It looks like a propaganda photo in favor of the communist groups. Take a look at the guy who’s supposed to be executed, he got: defiant attitude, stylish clothing great hair and he’s looking way too nonchalant. German photojournalists of the early 20th century would frequently stage their photographs. In their eyes it wasn’t that they were faking, it was just that they wanted to tell a true story in the most visually compelling way. 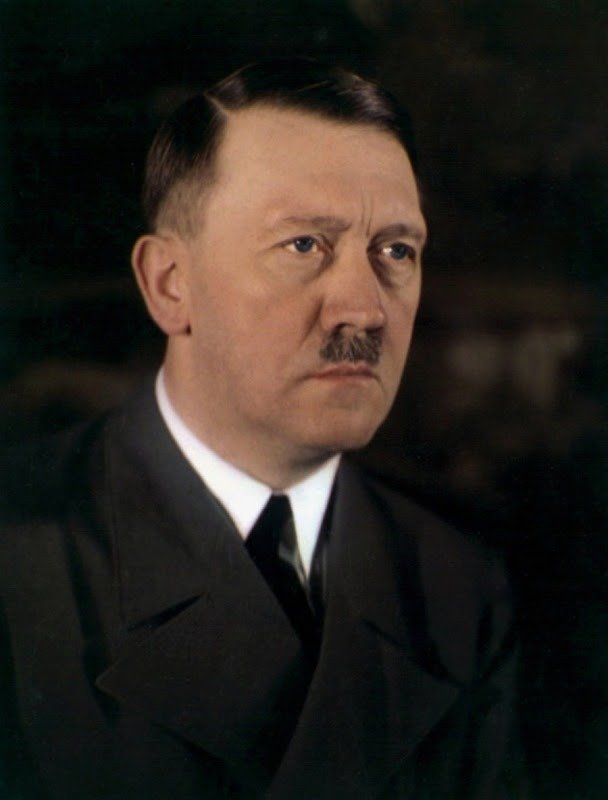 Adolf Hitler’s eye color in a rare color photo. Although Adolf Hitler claimed the Germans were of a superior Aryan race of white, tall, blonde hair, blue eyed individuals, he himself was of modest height, blue-eyed, and brown-haired. Traudl Junge, his last secretary often told in interviews, that people were amazed about Hitler’s blue eyes. Those who met Hitler, after the War often refer, in their reminiscences, to his remarkable pale, clear blue eyes, which many state, unequivocally, had a distinctly hypnotic quality. 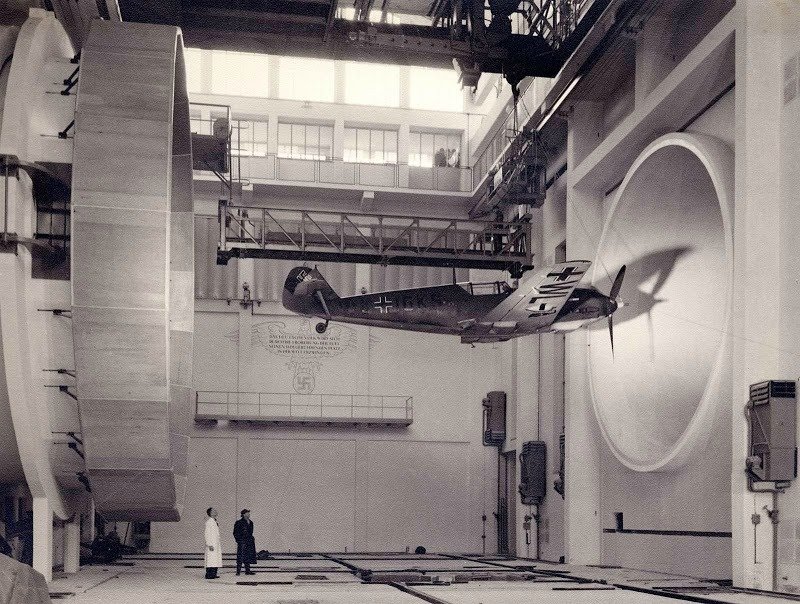 The Messerschmitt Bf 109 E3 was designed by Willy Messerschmitt and Walter Rethel and had its first test flight in 1935. The all-metal aircraft had a closed cockpit and a retractable under-carriage. Powered by a Rolls-Royce Kestrel V engine, it had a maximum speed of 342 mph (550 km) and had a range of 410 miles (660 km). It was 28 ft 4 in (8.65 m) long with a wingspan of 32 ft 4 in (9.87 m). The aircraft was armed with 2 machine-guns and 2 20 mm cannons. Germany’s new Messerschmidt aeroplanes have been tested in the Spanish civil war. The pilots are pledged before they leave Germany never to let their planes fall into the hands of the enemy. Each pilot has orders to set fire to his plane if it is brought down or has to make a forced landing on enemy soil. Each plane has a special tank of inflammable matter that can be ignited at once for this purpose.

The facility is the Luftfahrtforschungsanstalt Hermann Goering. It was located in Volkenrode, a suburb of Braunschweig. It was the most advanced wind tunnel test facility in the world at the time, though they were never able to fully calibrate most of the equipment due to the war. 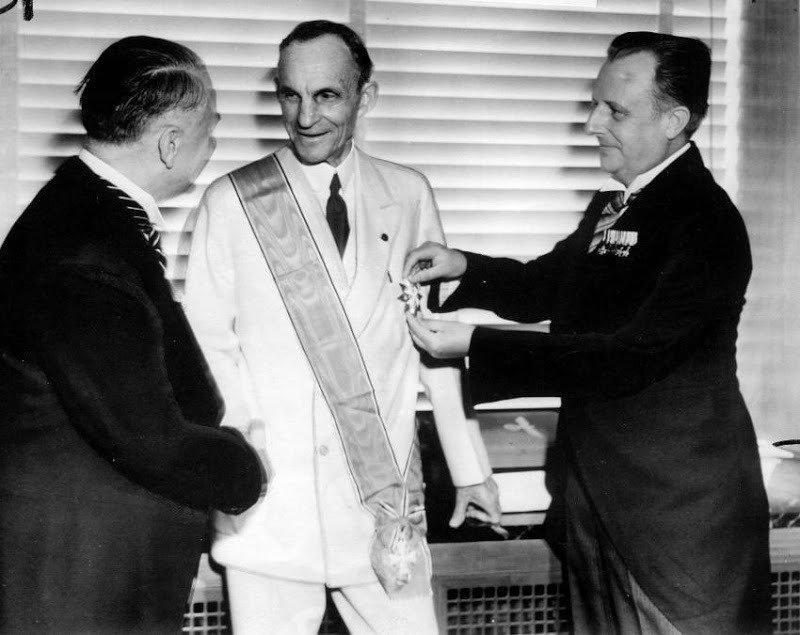 Henry Ford receiving the Grand Cross of the German Eagle from Nazi officials, 1938. At a ceremony in Dearborn, Michigan, Henry Ford is presented with the Grand Cross of the Supreme Order of the German Eagle on his 75th birthday. Henry Ford is the first American recipient of this, an honor created a year earlier by Adolf Hitler. This is the highest honor Nazi Germany could give to any foreigner and represents Adolf Hitler’s personal admiration and indebtedness to Henry Ford. The presentation is made by Karl Kapp, German consul in Cleveland, and Fritz Heller, German consular representative in Detroit. Ford is the only American mentioned in Hitler’s book “Mein Kampf”.

The peculiar admiration that National Socialists had for Henry Ford and the supposed sympathies that the Detroit industrialist harbored for Nazism keep attracting the curious, both academic historians and internet readers. There is something irresistible about the connection between the man taken to symbolize American industrial modernity and the quintessential villains of the twentieth century. The New York Times reported that a portrait of Henry Ford graced Hitler’s Munich office 1922. Hitler acknowledged Ford in Mein Kampf and Baldur von Schirach testiﬁed in court in Nuremberg that “the decisive anti-Semitic book” he had read was Ford’s International Jew. 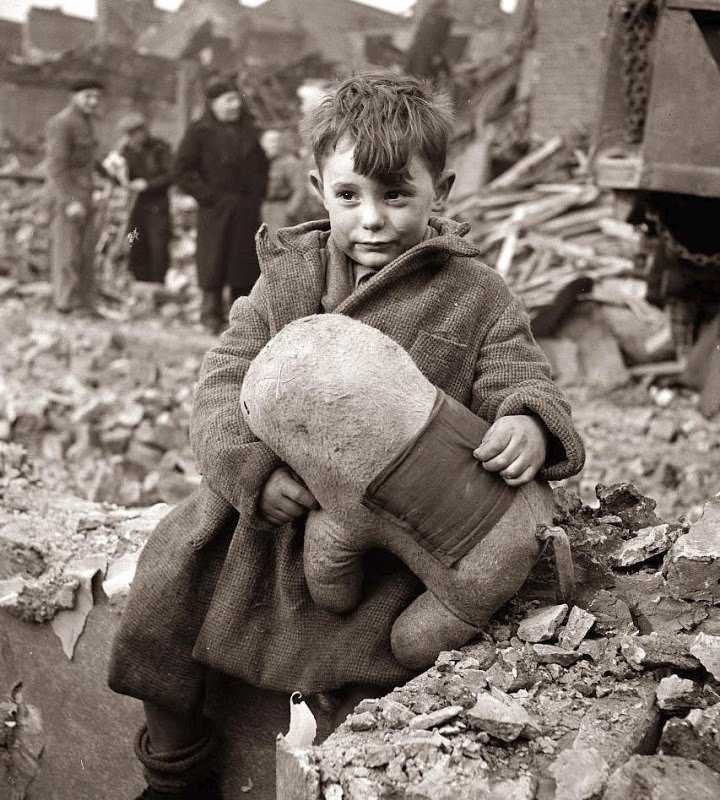 The boy did in fact survive the war. In the photo he’s actually sitting outside where his house used to be. The child is sitting alone in the ruble with his stuffed animal. Nazi Germany continued to bomb London up until 1945 using a variety of delivery methods. The “Little Blitz” of 1944 was the last time Nazi Germany employed aircraft to drop bombs over England. The Nazi Germany was using V-1 and V-2 rockets in 1945. 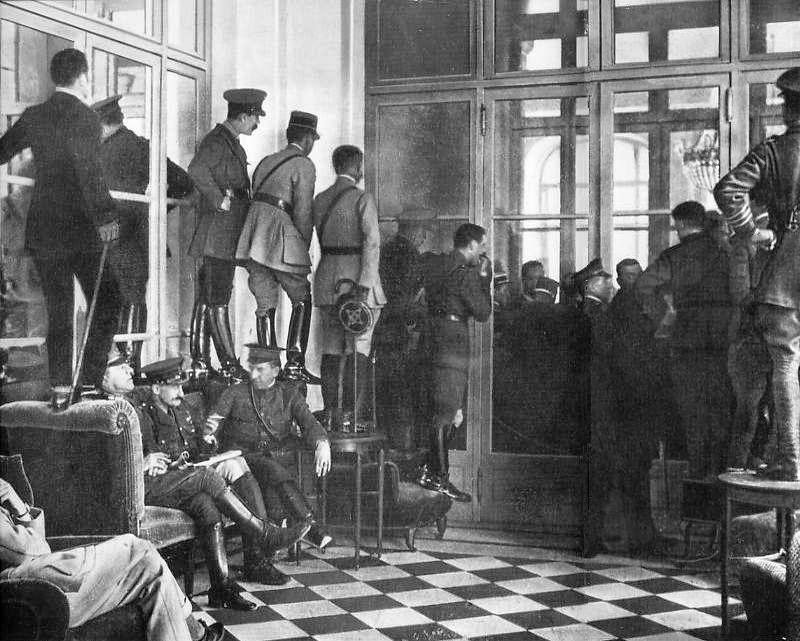 Spectators standing upon tables to get a glimpse of the Versailles Treaty being signed, France, 1919.

This treaty went wrong in so many ways. First off, it was a failure of making sovereign nations because they ended up just being colonies of the Large Powers (an example, the whole Middle-East). Secondly (and the most important mistake), it put full responsibility on Germany for the war and made them pay insanely high reparations which was done out of bitterness and prideful revenge (remember, there really wasn’t a “Bad guy” in WW1) and also a political tool because David Lloyd George who represented the UK at the peace conference promised reparations for the UK if they elected him (by the way, England the UK wasn’t nearly as damaged as other countries in the war). This made Germany go through dark times until they elected Hitler into power because they were really pissed by how they were treated. Also, other countries became pissed because they really weren’t rewarded for their help in the war which led to their own fascist states (Japan and Italy). 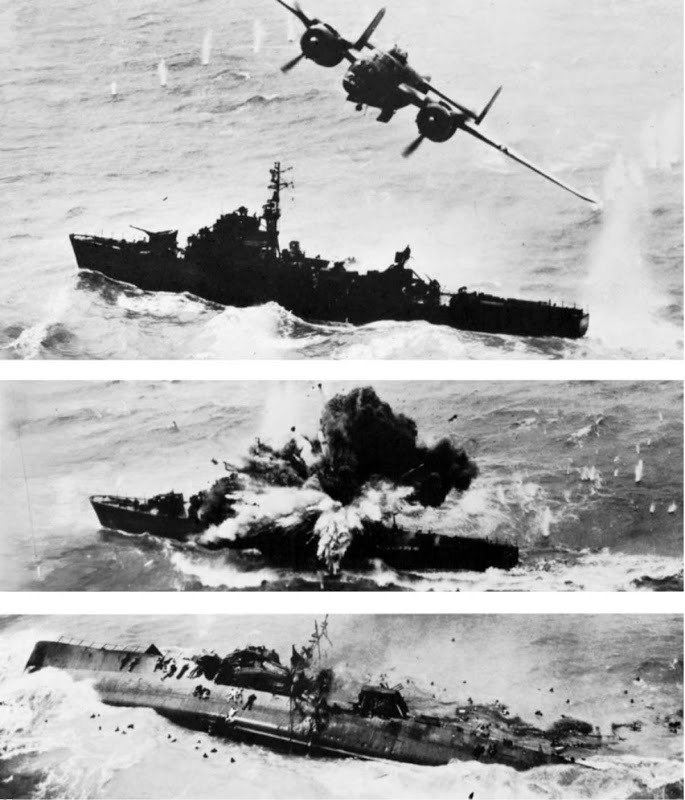 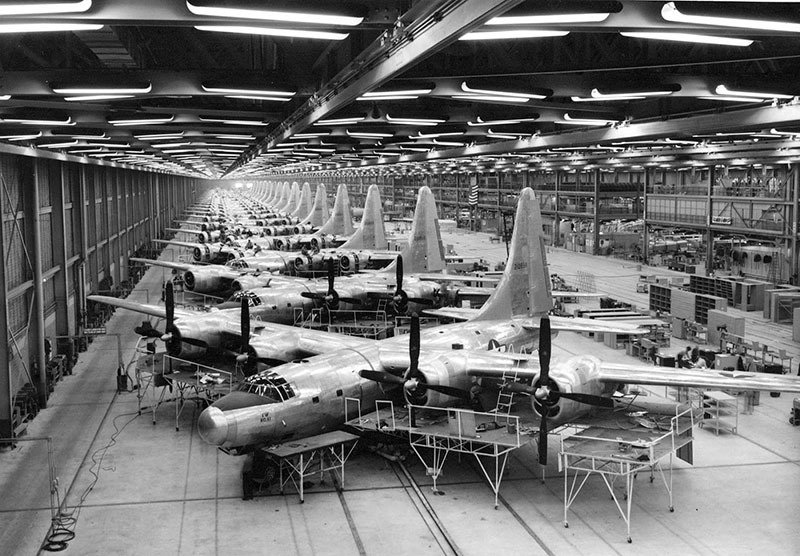 B-32 Bomber Factory in Fort Worth, Texas,1944. The B-32 Dominator was a heavy bomber made for United States Army Air Forces during World War II, and had the distinction of being the last Allied aircraft to be engaged in combat during World War II.

The B-32 Dominator was initially intended as insurance against failure of the B-29 program; however, the success of B-29 development and operational deployment made cancellation of the Dominator a very real possibility at several points in its development.