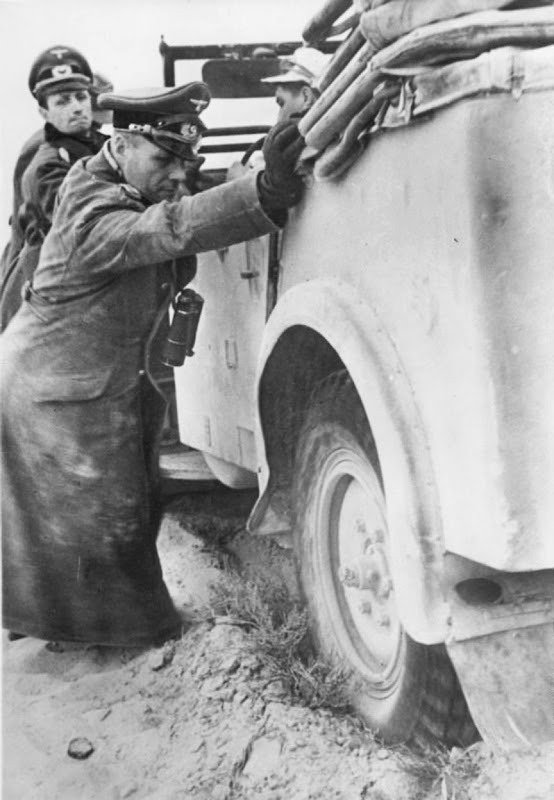 Rommel was well respected by his men and enemies. He was a general that had “my men first, then me” kind of attitude. There were sometimes that he preferred to retreat, losing ground and resources, than the lives of his men, hoping he would have the chance to regroup and strike with more force.

Rommel also ignored orders, from Hitler himself, to kill Jewish soldiers, civilians, and captured commandos. Overall he treated war as a battle of wits and skill, hoping to out play his enemies and have them surrender, than trying to cause mass casualties and blood shed. Rommel was a German soldier, not a Nazi one, and the distinction is incredibly important. A very inspiring man from a dark point in history. 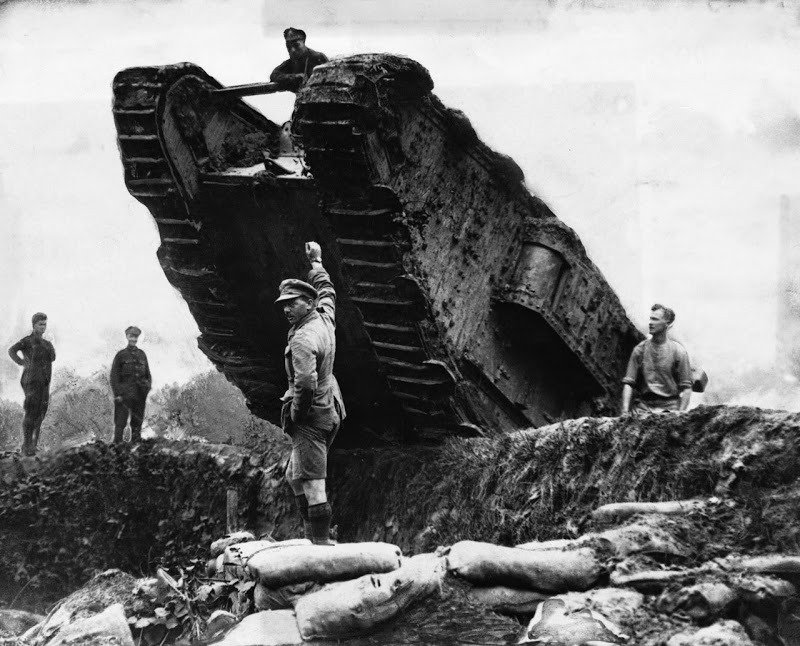 British tanks maneuvering trenches during the Battle of Cambrai, the first use of tanks in mass, France, 1917.

When the British dispatched 400 tanks against the German army at the Battle of Cambrai in 1917, the result was a draw — but legend quickly declared the tank a winner following its first major role in combat. The Battle of Cambrai, fought in November/December 1917, proved to be a significant event in World War One. Cambrai was the first battle in which tanks were used en masse. In fact, Cambrai saw a mixture of tanks being used, heavy artillery and air power. Mobility, lacking for the previous three years in World War One, suddenly found a place on the battlefield – though it was not to last for the duration of the battle. Aside from their undoubted initial value as a surprise tactic the tanks were deemed to be of limited use in offensive operations, unwieldy and prone to malfunction. 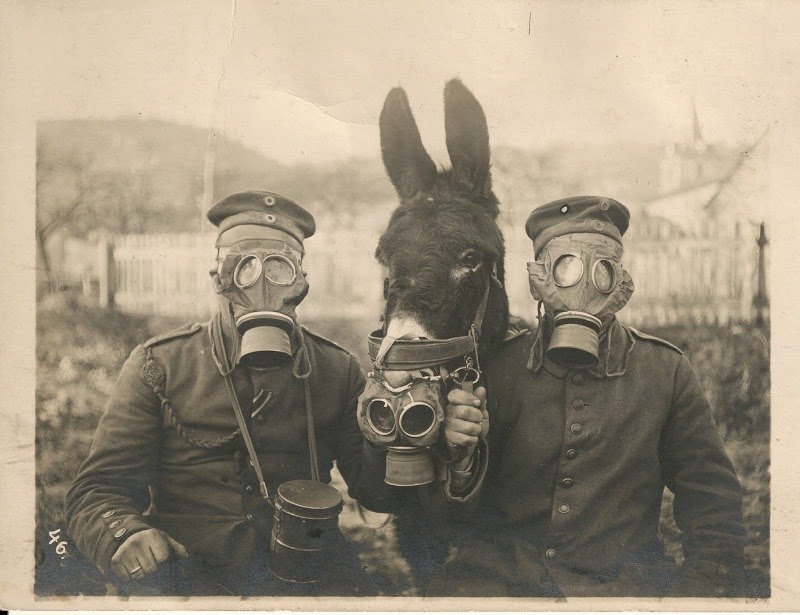 Many animals were used during WW1. Horses, mules, dogs and pigeons were vulnerable to poison gases so that special protection was necessary for them. Horses were equipped with gas masks over their muzzles and were protected from inhalation of poison gases such as phosgene. Equine eyes were not affected by lachrymatory agents so that their masks consisted only of specially made nose bags but, unfortunately, these animal’s eyes were vulnerable to the effects of chlorine and vesicatory gases. Of the million British horses sent overseas to help with the war effort, only 62,000 returned home. This is the forgotten tragedy of the Great War – a conflict that pitched as many animals into the line of fire as it did humans. For years few knew of the unimaginable suffering of the beasts transported across the Channel to the Western Front.

Adolf Eichmann walks around the yard of his cell, Israel, 1961. Otto Adolf Eichmann was a German Nazi SS-Obersturmbannführer (lieutenant colonel) and one of the major organizers of the Holocaust. Because of his organizational talents and ideological reliability, Eichmann was charged by SS-Obergruppenführer Reinhard Heydrich with the task of facilitating and managing the logistics of mass deportation of Jews to ghettos and extermination camps in German-occupied Eastern Europe.

After World War II, he fled to Argentina using a fraudulently obtained laissez-passer issued by the International Red Cross. He lived in Argentina under a false identity, working a succession of different jobs until 1960. He was captured by Mossad operatives in Argentina and taken to Israel to face trial in an Israeli court on 15 criminal charges, including crimes against humanity and war crimes. The Mossad was able to get an EL-AL to Buenos Aires to extricate Eichmann from Argentina. When the Argentinians discovered the real reason for the jet being in Argentina, they tried to stop it from flying back to Israel. The Mossad was only able to escape because they flew directly to Africa to refuel instead of remaining in the Western Hemisphere like they reported they would in their itinerary. He was found guilty and executed by hanging in 1962. He is the only person to have been executed in Israel on conviction by a civilian court. 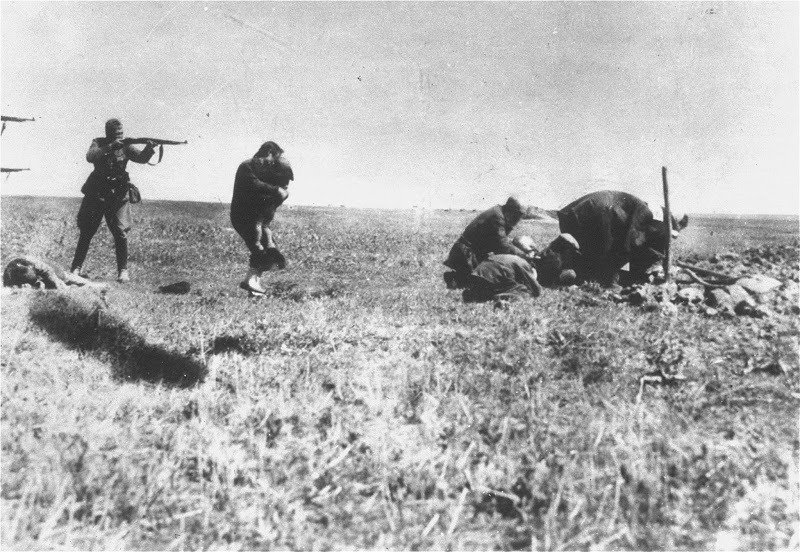 The executioner appears to be standing over the body of an already executed person. The gun barrels of other executioners are visible at the left-hand edge of the photograph. The photo was mailed from the Eastern Front to Germany and intercepted at a Warsaw post office by a member of the Polish resistance collecting documentation on Nazi war crimes. The original print was owned by Tadeusz Mazur and Jerzy Tomaszewski and now resides in Historical Archives in Warsaw. The original German inscription on the back of the photograph reads, “Ukraine 1942, Jewish Action [operation], Ivanograd.” 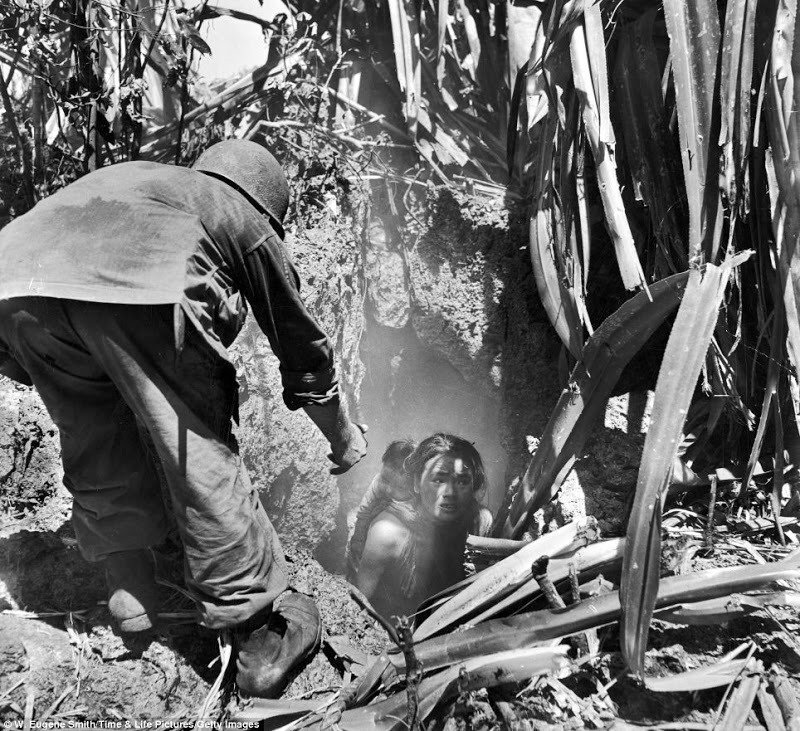 A US soldier offers his hand to a woman leaving a cave where she had hidden with her child, Saipan, 1944.

She isn’t only scared by the war, but also by the Japanese propaganda. The Japanese told everyone that Americans would rape and murder them if captured. According to the PBS Nova documentary, the Japanese government told the citizens that in order to become a United States Marine, you had to murder your parents. American loudspeaker units and American marines offered food and safe passage. But many of the civilians were not interested or were too frightened to listen. Some waded into the sea, some used knives, some borrowed grenades from Japanese soldiers… Most though seem to have used a nearby suicide cliff, where whole families walked off into eternity. 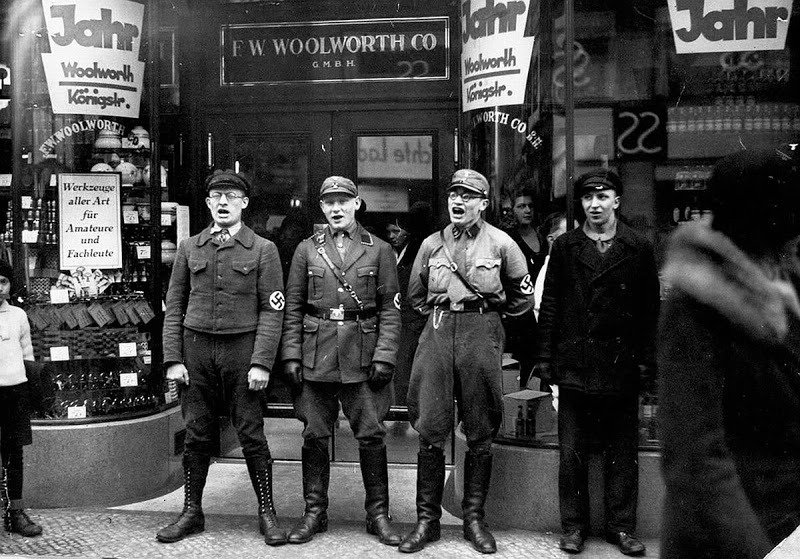 Nazis singing to encourage a boycott of Jewish shops , 1933.

Within days of taking power, the Nazis called for Germany to boycott all Jewish businesses. This surprised many people as they had not expected the Nazis to act of their anti-Jewish ideas. This is the start of years of anti-Jewish propaganda. Nazi propaganda minister Joseph Goebbels arranged for a boycott of Jewish-owned businesses. He would later explain in an April 1 speech at the Berlin Lustgarten that the boycott was in retaliation for anti-German “atrocity propaganda” spread by the “international Jewry” in foreign newspapers. 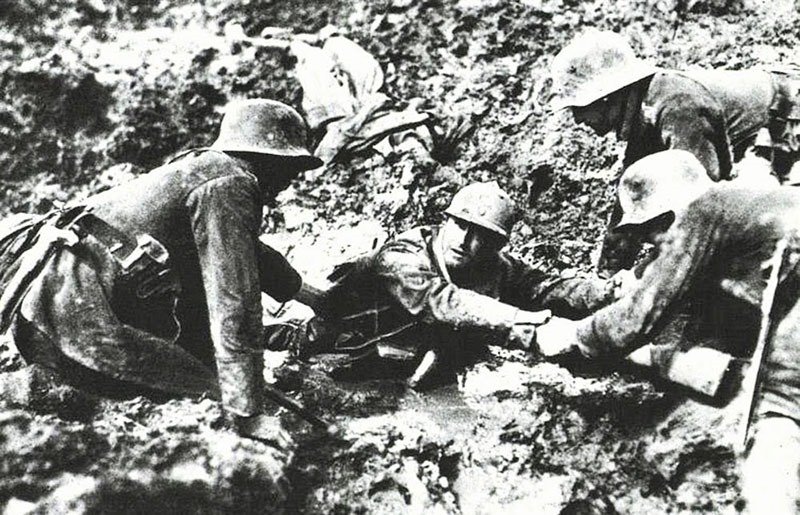 German troops trying to rescue a French soldier from sinking in a mud hole, 1918.

Photo taken during the Battle of Verdun, one of the most deadliest battles of Great War. Verdun is located on the border of France and Germany. Even today the Verdun battlefield is a vast graveyard, where the mortal remains of over 100,000 missing soldiers remain where they fell, unless discovered by the French Forestry Service and laid in the Douaumont ossuary. 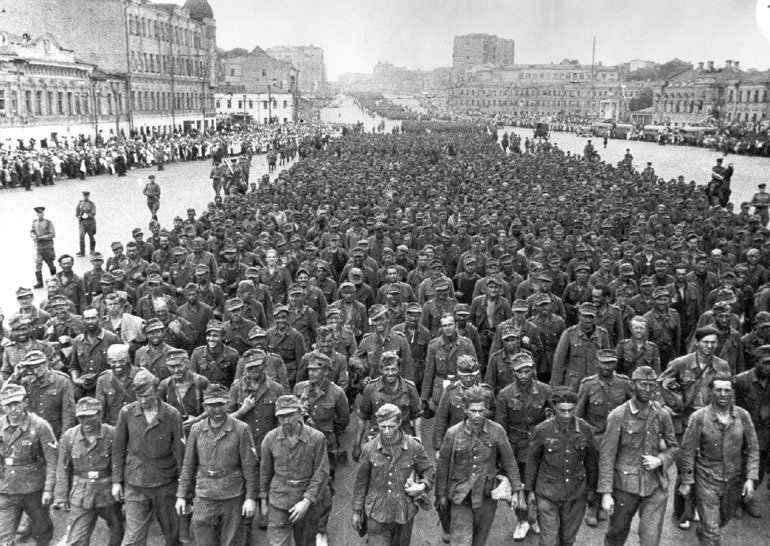 57,000 German prisoners march to Moscow after defeat at Belarus during “Operation Bagration”, 17 July 1944.

Operation Bagration was the Soviet destruction of German Army Group Center – was, arguably, the single most successful military action of the entire war. This vital Soviet offensive was launched just after Allied troops had landed in Normandy, and it is symptomatic of the lack of public knowledge about the war in the East that whilst almost everyone has heard of D-Day, few people other than specialist historians know much about Operation Bagration. Yet the sheer size of Bagration dwarfs that of D-Day. Operation Bagration (named after a Georgian hero in the war against Napoleon 130 years earlier) was not just one of the largest military offensives of the war, it was one of the most sophisticated. On 19 June 1944, Red Army partisan units, operating behind German lines, attacked transport and other Wehrmacht supply lines; two days later the Soviets launched massive air attacks; and then on the 23rd (one day after the third anniversary of the German invasion) the Red Army moved forward under cover of darkness.

Their advance caught the Germans by surprise. Once again, the Soviet technique of ‘maskirovka’ (deception) had worked. The Soviets pushed forward in powerful spearheads leaving enemy units isolated behind them – a tactic that was made all the more effective because of a tactically disastrous decision Hitler had made. The German leader had ordered the soldiers of Army Group Center to stand firm and inflexible in the face of any Soviet advance. His directive of 8 March 1944 had announced that ‘feste Plaetze’ (fortified places) should be the core of the German defense. The idea was that the Soviets would advance past these fortifications, which would, Hitler said, “fulfill the function of fortresses in former historical times”. The commander of the German Ninth Army, General Jordan could scarcely believe the nature of the order he had been given.

“Ninth Army stands on the eve of another great battle”, he wrote, “unpredictable in extent and duration… the Army believes that, even under the present conditions, it would be possible to stop the enemy offensive, but not under the present directives which require an absolutely rigid defense”. “Hitler’s orders to hold firm were totally disastrous”, confirms Antony Beevor. “He refused to allow his generals any flexibility or leeway which was totally contrary to all the precepts and the teaching of the German general staff… but because Hitler so distrusted his generals he wanted to control everything and that was basically the undoing of the German army”.  “The German behavior in their fortified areas was stupid”, says Veniamin Fyodorov, who participated in the initial Soviet assault in Operation Bagration. “Our shelling broke them down. Huge amounts of shells flew towards them and you couldn’t hear anything: only this booming! The fortified areas could be smashed completely. It was death… The Germans held the ground to the last man – they were all doomed to death”. 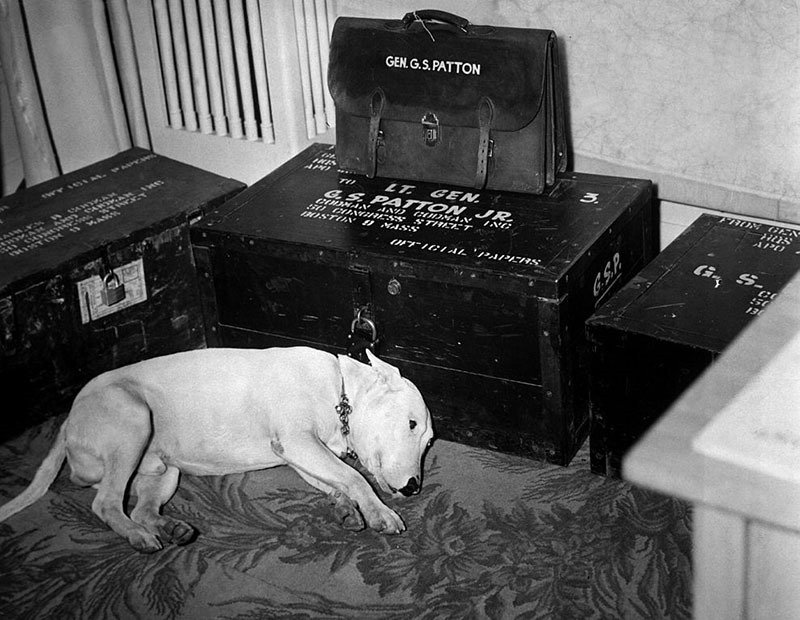 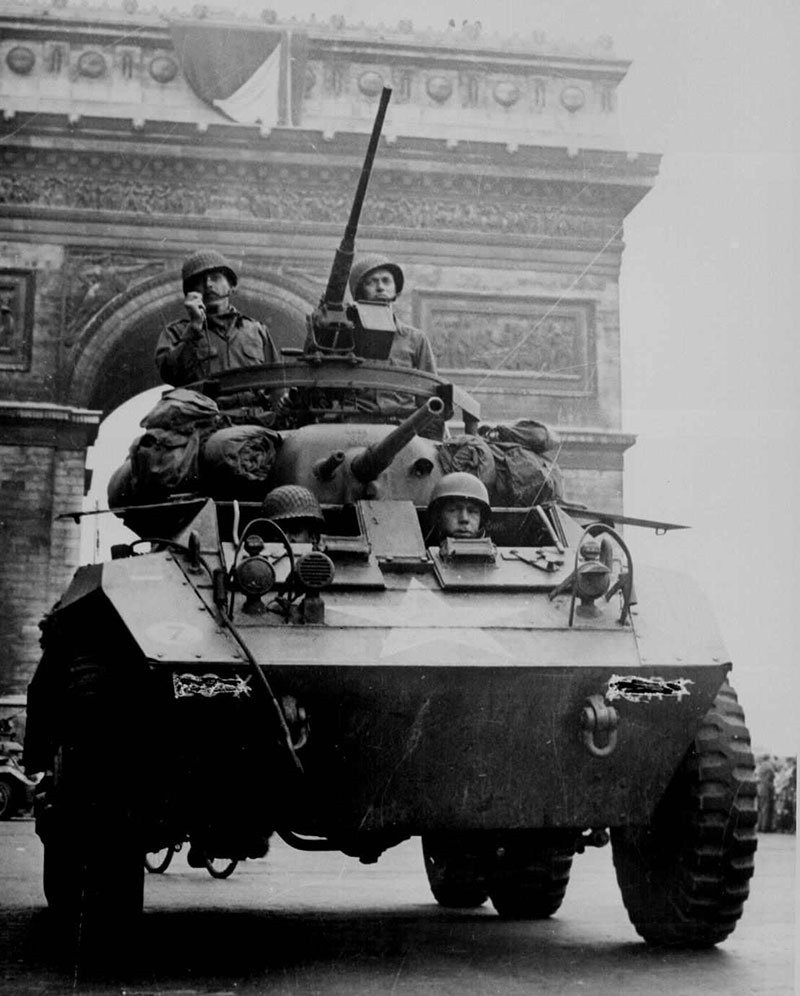 Liberation of Paris, August 1944. On this day in 1944, French General Jacques Leclerc enters the free French capital triumphantly. Pockets of German intransigence remained, but Paris was free from German control. Two days earlier, a French armored division had begun advancing on the capital. Members of the Resistance, now called the French Forces of the Interior, proceeded to free all French civilian prisoners in Paris. The Germans were still counterattacking, setting fire to the Grand Palais, which had been taken over by the Resistance, and killing small groups of Resistance fighters as they encountered them in the city.

More than 500 Resistance fighters died in the struggle for Paris, as well as 127 civilians. Once the city was free from German rule, French collaborators were often killed upon capture, without trial. 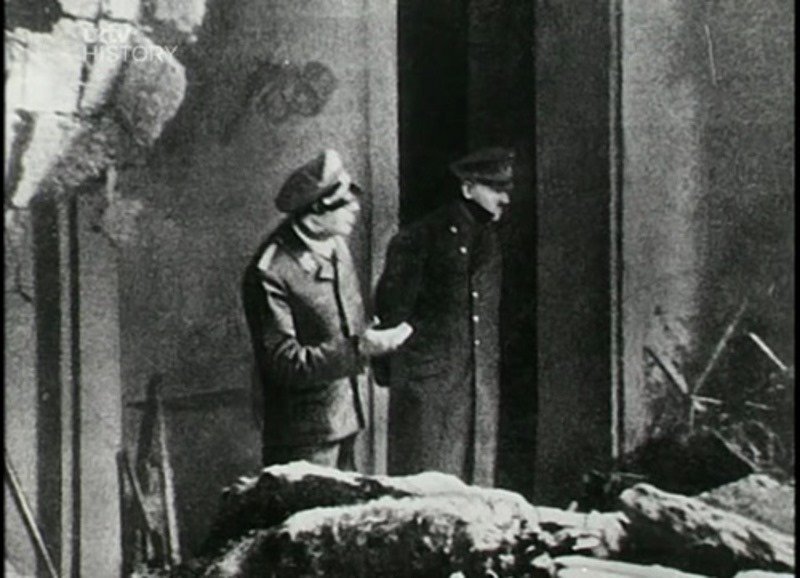 This last known picture of Hitler was taken approximately two days prior to his death as he stands outside his Berlin bunker entrance surveying the devastating bomb damage. With Germany lying in ruins after six years of war, and with defeat imminent, Hitler decided to take his own life. But before doing so, he married Eva Braun and then penned his last will and testament. The next day in the afternoon on April 30, 1945 Braun and Hitler entered his living room to end their lives. When Hitler asked his physician to recommend a reliable method of suicide his doctor suggested combining a dose of cyanide with a gunshot to the head. 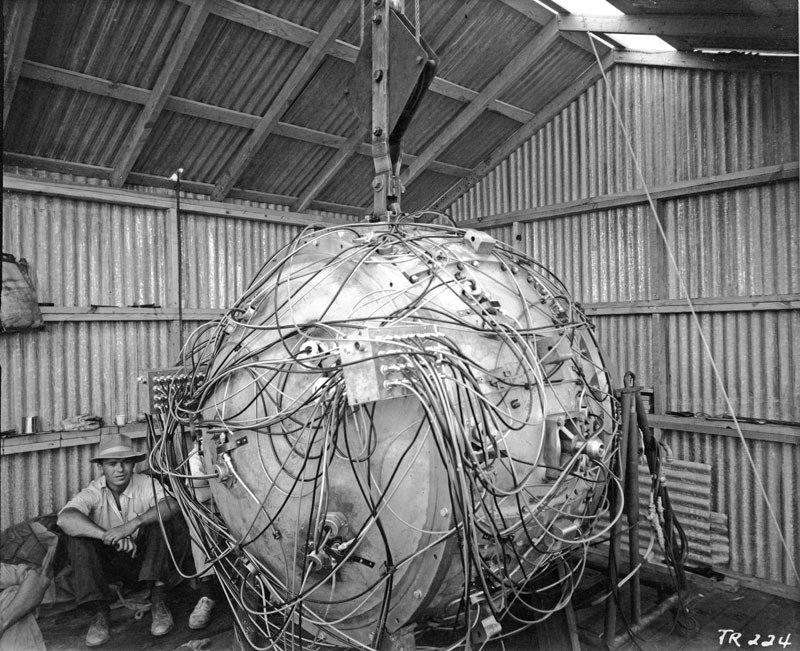 The nuclear test was code named Trinity, but the atomic device was nicknamed The Gadget. The date of the Trinity test is usually considered to be the beginning of the Atomic Age. “The gadget” was the code name given to the first bomb tested. It was so called because it was not a deployable weapon and because revealing words like bomb were not used during the project for fear of espionage. It was an implosion-type plutonium device, similar in design to the Fat Man bomb used three weeks later in the atomic bombing of Nagasaki, Japan.