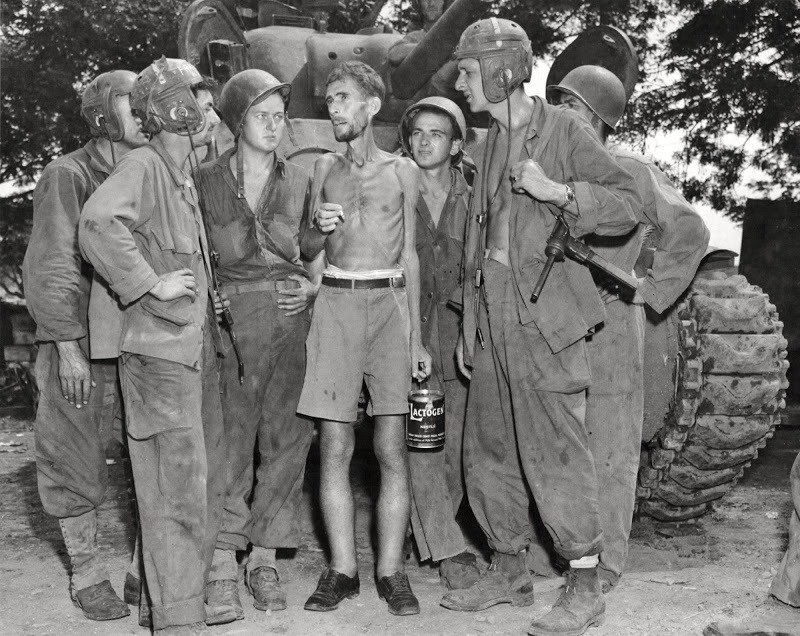 American tank crews listen as Bernard Herzog (US citizen) who was liberated from the camp of Santo Tomas, Manila, Philippines.

The Philippines were an unincorporated US territory at the time. There were a great number of US citizens living in the Philippines. Once the Japanese took over, they were put into internment camps. Bernard Herzog lost 78 pounds (35 kg) and is suffering from beriberi.

His lower legs are swollen probably due to beriberi, an illness caused by B1 vitamin (Thiamine) deficiency. This was probably caused by a diet composed mainly/exclusively of refined white rice, common in the Japanese POW camps. That is a can of baby formula that he is holding, probably contains most essential nutrients and would be relatively easy to digest, which would be very important considering he’s probably eaten nothing but rice for a few years. Ingesting something different after that would probably be a huge shock to his system. It’s called Refeeding Syndrome and was first described in Far East prisoners of war after the second world war. Starting to eat again after a period of prolonged starvation seemed to precipitate cardiac failure. 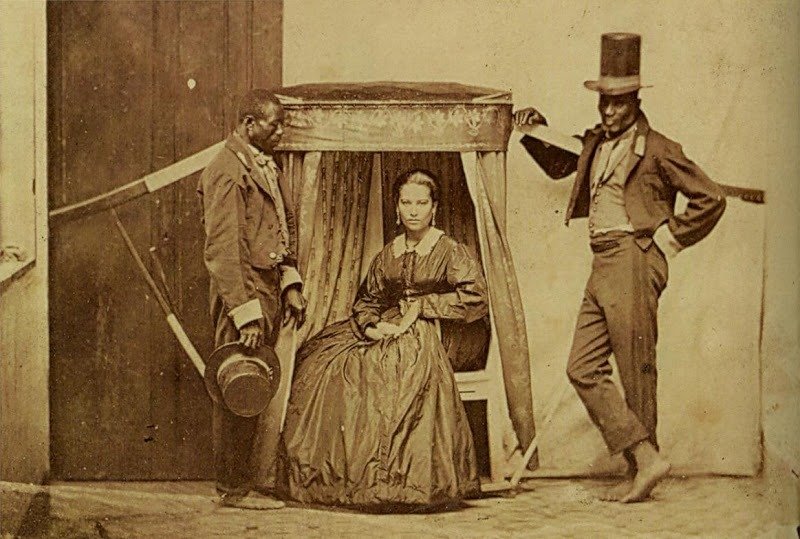 Lady in a litter being carried by her slaves, Brazil, 1860.

These two men are manumitted slaves. Manumission is the act of a slave owner freeing his or her slaves. They borrowed the clothes and the hats just for the picture. It’s a posed photograph and statement about being manumitted rather than a picture of a woman posing with her slaves. To answer the question of why they are dressed up but shoeless – it’s part of the old custom of using shoes to denote class, position, or wealth. It was highly traditional that slaves be barefooted. Some countries went so far as to mandate that slaves always be without shoes.

The motivations of slave owners in manumitting slaves were complex and varied. Firstly, manumission may present itself as a sentimental and benevolent gesture. One typical scenario was the freeing in the master’s will of a devoted servant after long years of service. This kind of manumission generally was restricted to slaves who had some degree of intimacy with their masters, such as those serving as personal attendants, household servants, secretaries and the like. In some cases, master and slave had had a long-term sexual relationship. Owners sometimes freed the woman and children born of such relationships. 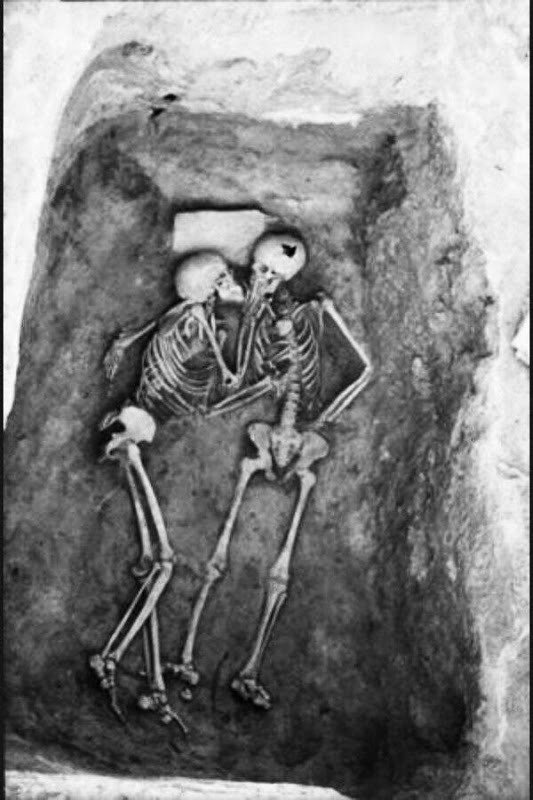 This is from an archeological site called Hasanlu, level IVB, which was burned after a military attack. People from both fighting sides were killed in the fire, which apparently spread quite unexpectedly and quickly through the town. These skeletons were found in a plaster grain bin, probably hiding from soldiers, they almost certainly asphyxiated quickly because of the fire. They are both male, which could indicate a family connection (or maybe a homosexual relationship). The “head wound” is actually from modern-day excavators. The skeleton couple was unearthed in 1972.

Teppe Hasanlu, located in northwest Iran is a very famous archaeological site of an ancient city and was excavated in 10 seasons between 1956 and 1974 by a team from the University Museum, University of Pennsylvania and the Metropolitan Museum of New York. Many valuable artifact were unearthed, including this eternal couple. 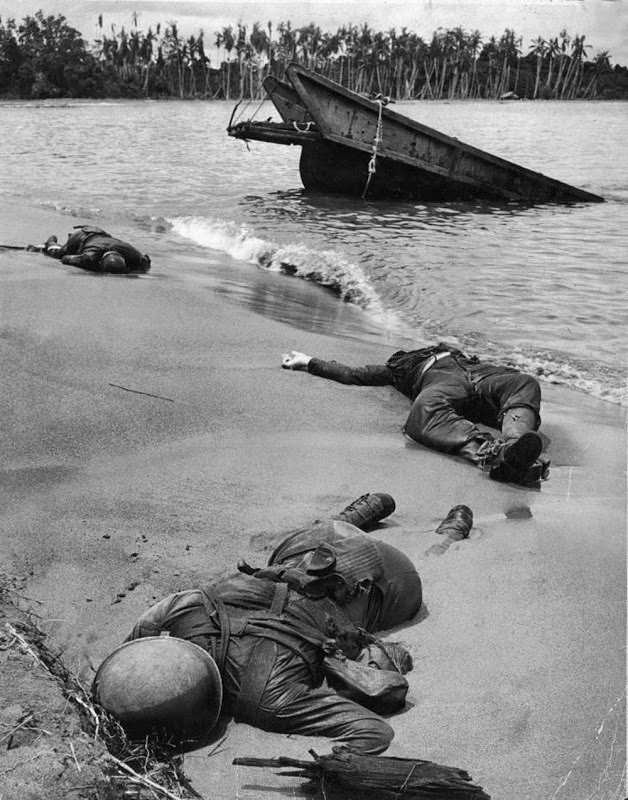 The face of war: The first press pictures of dead U.S. soldiers that was presented to the public, 1943.

At a time when censors used a heavy hand to keep the American public from knowing and seeing the carnage in the Pacific during World War II, this ground-breaking photograph of dead American soldiers confronted the American public for the first time with the real face of the war. It showed the bodies of three American soldiers who had been killed on Buna Beach in New Guinea. Though none of the men were recognizable, the photo was arresting in its stark depiction of the stillness of the death, and then shocking when it became clear on second glance that maggots had claimed the body of one of the soldiers faced down on the sand.

President Franklin D. Roosevelt approved its publication. President Roosevelt feared that the American public might be growing complacent about the war and its horrific toll. The photo, taken in February 1943, was finally published on Life’s September 20, 1943 issue. 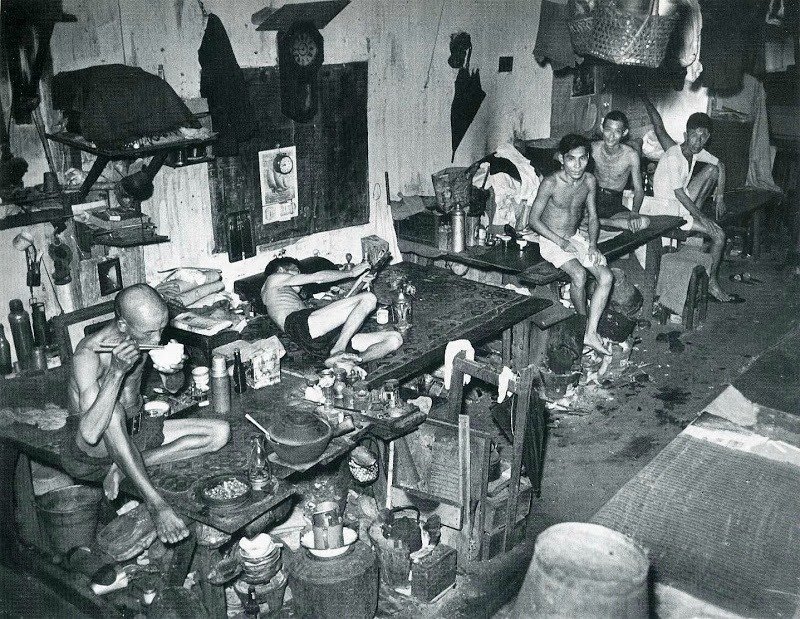 Despite being targeted by law enforcement across the globe at the start of the 20th century, opium and opium dens were prevalent fixtures in east Asia, the United States, and Europe up until the mid-1950′s. In this photograph, opium smokers in Singapore relax in a sparsely furnished opium den, suggesting that the clientele were mostly working class. It was a place where you do opium and hang out, then do more opium. The social impact was huge and damaging, with addicts prone to sell all their possessions to feed their habit. Many men ended up homeless doing nothing but smoking opium.

In the Western world, opium dens were frequented by and associated with the Chinese, because the establishments were usually run by Chinese who supplied the opium as well as prepared it for visiting non-Chinese smokers. Most opium dens kept a supply of opium paraphernalia such as the specialized pipes and lamps that were necessary to smoke the drug. Opium users would recline in order to hold the long opium pipes over oil lamps that would heat the drug until it vaporized, allowing the smoker to inhale the vapors.

In urban areas of the United States, particularly on the West Coast, there were opium dens that mirrored the best to be found in China, with luxurious trappings and female attendants. For the working class, there were also many low-end dens with sparse furnishings. These latter dens were more likely to admit non-Chinese smokers. 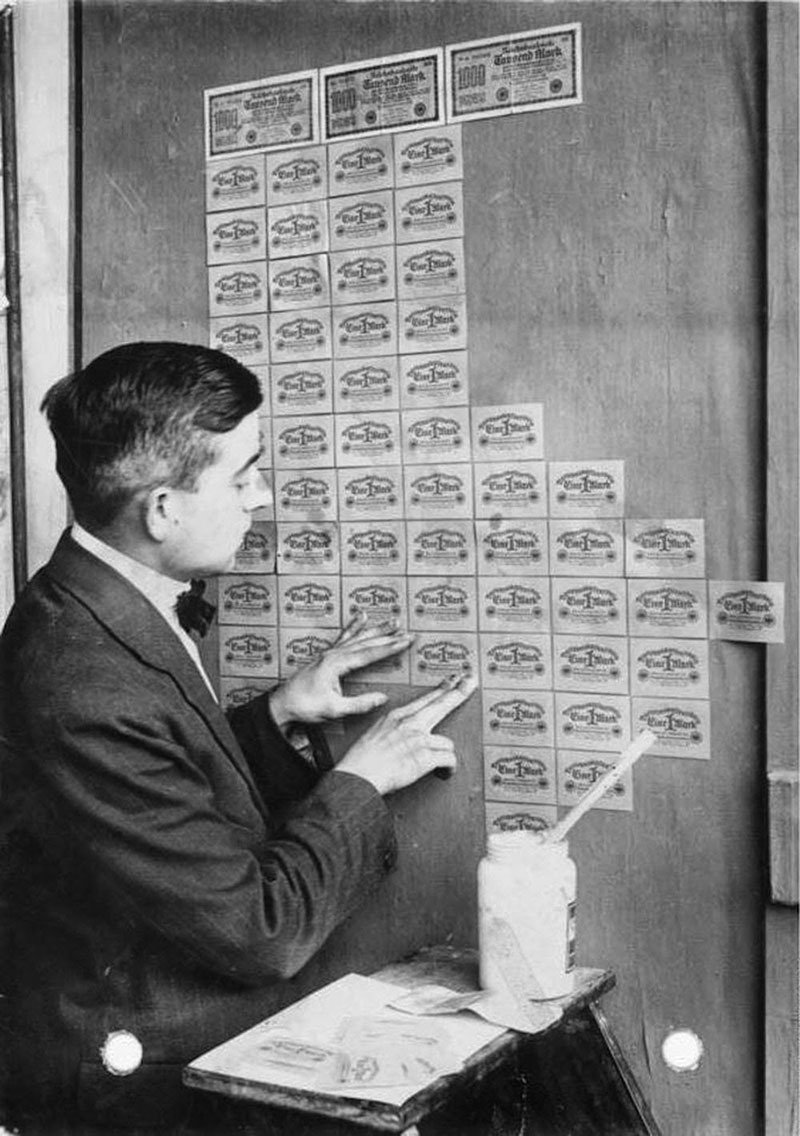 Before World War I Germany was a prosperous country, with a gold-backed currency, expanding industry, and world leadership in optics, chemicals, and machinery. The German Mark, the British shilling, the French franc, and the Italian lira all had about equal value, and all were exchanged four or five to the dollar. That was in 1914. In 1923, at the most fevered moment of the German hyperinflation, the exchange rate between the dollar and the Mark was one trillion Marks to one dollar, and a wheelbarrow full of money would not even buy a newspaper. Most Germans were taken by surprise by the financial tornado. The currency had lost meaning.

The hyperinflation in the Weimar Republic was a three-year period of hyperinflation in Germany (the Weimar Republic) between June 1921 and January 1924. Beginning in August 1921, Germany began to buy foreign currency with Marks at any price, but that only increased the speed of breakdown in the value of the Mark. The lower the mark sank in international markets, the greater the amount of marks were required to buy the foreign currency demanded by the Reparations Commission. During the first half of 1922, the Mark stabilized at about 320 Marks per Dollar. This was accompanied by international reparations conferences, including one in June 1922 organized by U.S. investment banker J. P. Morgan, Jr. When these meetings produced no workable solution, the inflation changed to hyperinflation and the Mark fell to 800 Marks per Dollar by December 1922. The cost-of-living index was 41 in June 1922 and 685 in December, an increase of more than 15 times.

Zero stroke or cipher stroke was an alleged mental disorder, reportedly diagnosed by physicians in Germany during the hyperinflation in the Weimar Republic (1921-24). The disorder was primarily characterized by the desire of patients to write endless rows of zeros, which are also referred to as ciphers. The zero stroke disorder was supposedly caused by the dizzying speed of hyperinflation and the calculations required to conduct commerce under its effect. It has been said that during the worst period of hyperinflation that in the time it took to drink a cup of coffee, the price for the cup could double. 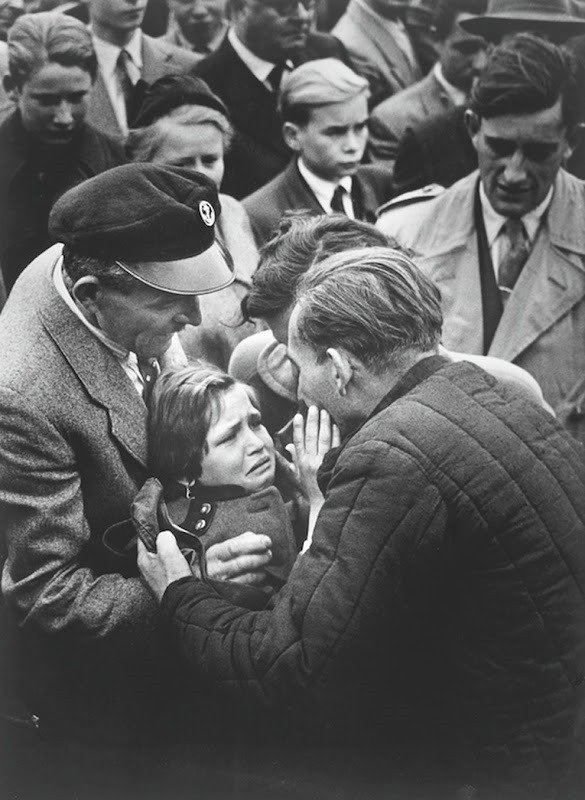 A German child meets her father, a WW2 soldier, for the first time since she was 1 year old, 1956.

The event this famous photo was taken on is part of what’s known as “Die Heimkehr der Zehntausend” (The Return of the 10,000), as they were the last German POWs in the Soviet Union to be released. 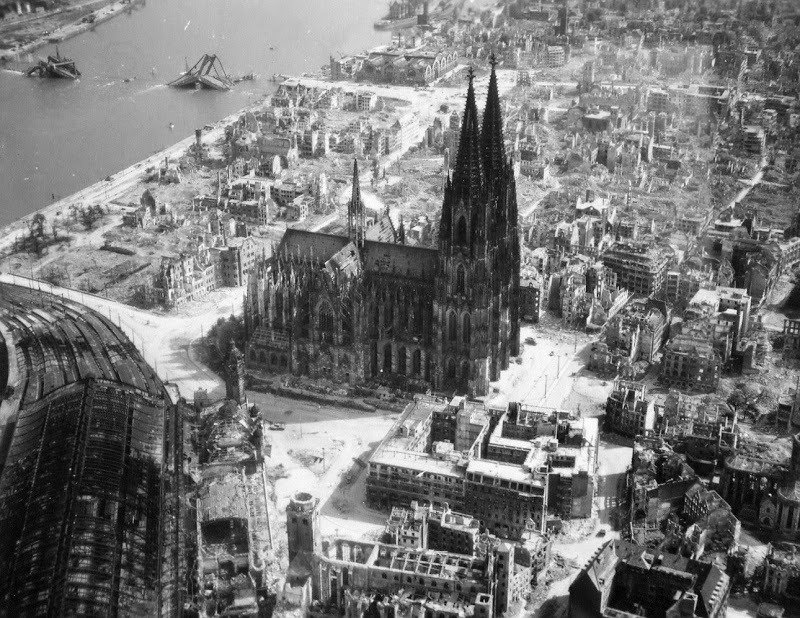 The Cologne Cathedral stands tall amidst the ruins of the city after allied bombings, 1944.

The cathedral suffered fourteen hits by aerial bombs during World War II. It did not collapse, but stood tall in an otherwise flattened city. The twin spires are said to have been used as an easily recognizable navigational landmark by Allied aircraft raiding deeper into Germany in the later years of the war, which may be a reason that the cathedral was not destroyed. It has been claimed that in June 1945 American troops used the cathedral as a rifle range. 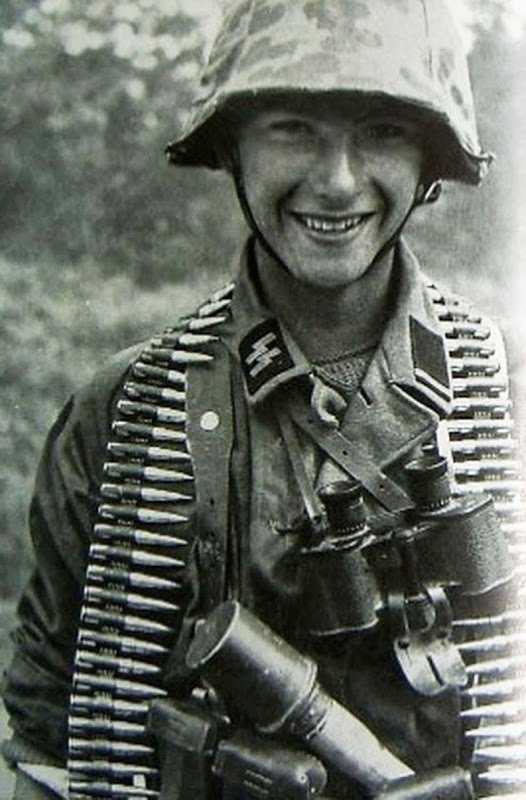 It’s probably from the end of the war when really young and old citizens were enlisted in a panic for soldiers. Most likely a member of the 12th SS Panzer Division “Hitlerjugend” which sustained 43% casualties during the Normandy campaign. SS recruiters for the division accepted boys as young as 14 into the ranks. Also by judging from the helmet cover he has on it looks to be the “pea” pattern cameo type which did not show up until late ’44/early ’45. So it’s probably in France. 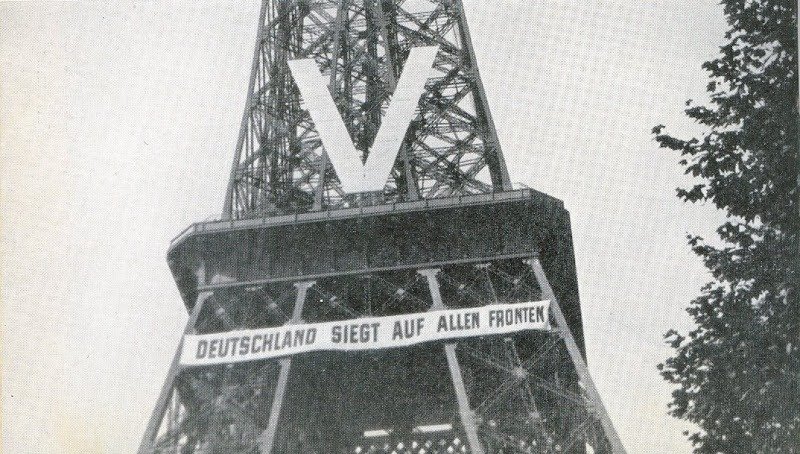 The Eiffel Tower during the Nazi occupation, 1940.

Translation: “Germany is victorious on all fronts”. The V stands for Victory. The Allied V-for-Victory cliché became so popular as a morale raiser that the enemy had to adopt to it, an easier task for the Italians, whose Vs displayed in public could be held to stand for Vinceremos, or We Will Win, than for the Germans, embarrassed by the fact that properly their V for Victory should be S für Sieg. The propaganda officers just changed Sieg to Viktoria, alluding to the “Germano-Latin” tradition. They said the use of V’s by civilians was a sign of support for Germany. They just used Viktoria because it had to start with V, and the V originally meant “V for victory” when Churchill used it, so they probably needed something similar in order to not make it too obvious. When the Germans started their campaign, Churchill noted that they probably meant “verloren”, German for defeat.