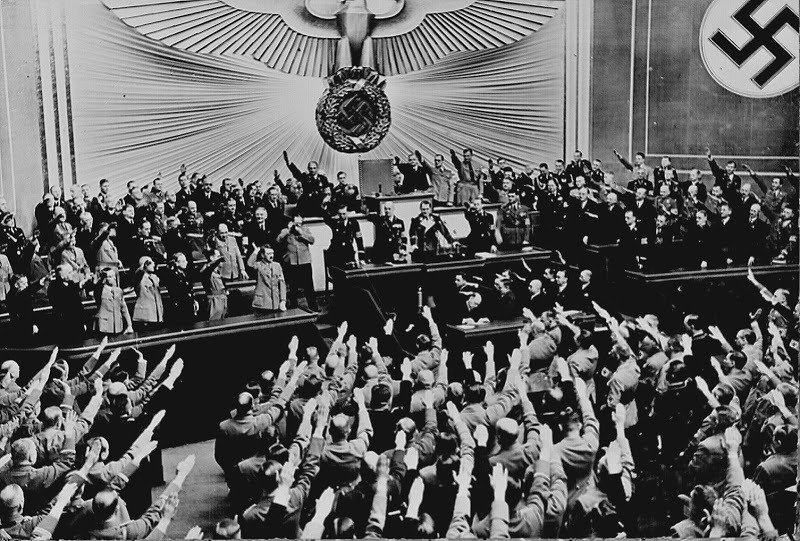 Ovation for Hitler in the Reichstag after announcing the successful Anschluss, 1938.

The Anschluss (German for “union”) was the annexation of Austria into Nazi Germany in March 1938. One of the Nazi’s ideologies was to re-unite all Germans either born or living outside of the Reich in order to create an “all-German Reich”. From the early beginning of his leadership in the Nazi Party, Hitler had publicly stated in his 1924 autobiography (Mein Kampf) that he would create a union between his birth country and Germany, by any means possible. 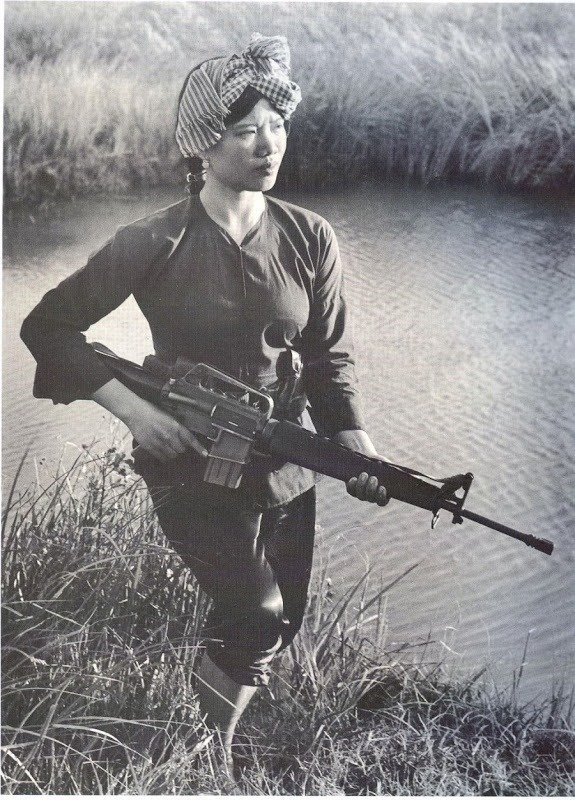 Her name is Lam Thi Dep (Dep means beautiful in Vietnamese), the picture was taken in 1972 at Soc Trang Province by Vietnamese journalist Minh Truong. She was 18 at the time and she’s wielding an M-16, the standard issue American soldier’s rifle. Usually this type of photos were taken for propaganda purposes. North Vietnamese women were deeply involved at all levels of the military campaign throughout the war, especially at the business end, fighting against the American-led forces in the jungle.

North Vietnamese women were enlisted and fought in the combat zone as well as provided manual labor to keep the Ho Chi Minh trail open, cook for the troops, and some served as “comfort women” for male communist fighters. They also worked in the rice fields in North Vietnam and Viet Cong-held farming areas in South Vietnam’s Mekong Delta region to provide food for their families and the war effort. Women were enlisted in both the North Vietnamese Army and the Viet Cong guerrilla insurgent force in South Vietnam. 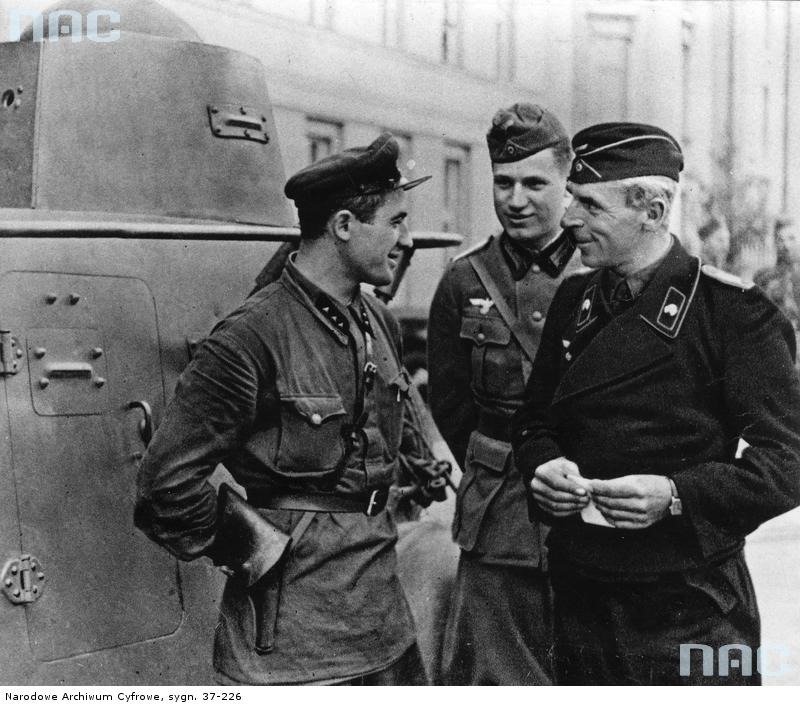 Soviet and German soldiers friendly conversation in the newly captured Polish city of Brest, September 1939. The Invasion of Poland.

On the left – Soviet officer, on the right – German officer, in the middle – German unteroffizier and probably translator. USSR and Nazi Germany worked together in conquering Eastern Europe of which this picture is testimony. This photo was taken during Soviet – German Military Parade in Brześć-nad-Bugiem, Sep. 22, 1939. Soviets and Germans met to celebrate the victory over Poland. That September, in violation of their own treaties with Poland, both of these allies invaded and partitioned the Second Polish Republic. Thus began World War II. 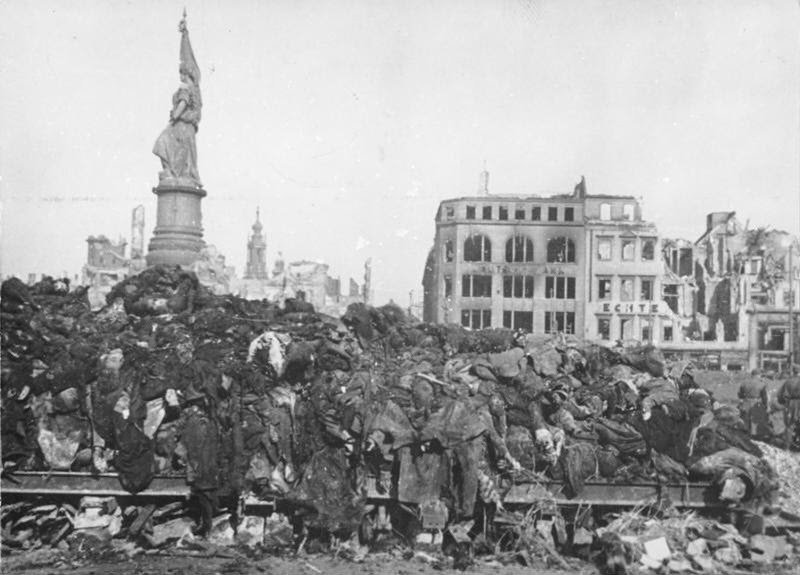 A pile of bodies awaits cremation after the bombing of Dresden, 1945. The bombing of Dresden in February 1945 has remained one of the more controversial aspects of World War Two. Dresden, a city unaffected by bombing up to that point in the war, lost many thousands of civilians in the firestorm that was created by the Allies.

In four raids between 13 and 15 February 1945, 722 heavy bombers of the British Royal Air Force and 527 of the United States Army Air Forces dropped more than 3,900 tons of high-explosive bombs and incendiary devices on the city. The incendiary bombs created so much fire that a firestorm developed. The resulting firestorm destroyed 40 square kilometres (15 square miles) of the city centre. The more the city burned, the more oxygen was sucked in – and the greater the firestorm became. It is thought that the temperature peaked at 1,800 degrees Fahrenheit (990 degrees Celsius). The surface of roads melted and fleeing people found that their feet were burned as they ran.

In all, between 22,000 and 40,000 people were killed by Allied bombing in Dresden. Historians still argue over the number of deaths. However, there were so many refugees in the city at the time that the real figure will almost certainly never be known.

25. Preparing for an Assault 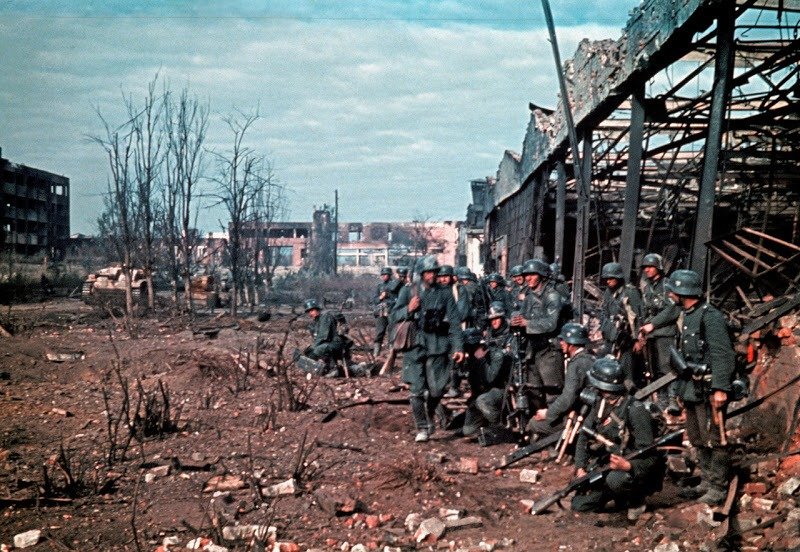 Preparing for an assault on a warehouse in Stalingrad, most likely in the later part of 1942.

By September 1942, a brutal hand-to-hand battle was being waged inside Stalingrad. As they fought from house to house and street to street, the Germans found that all of the tactical advantages they had possessed in fighting across the steppes were lost in the close confines of the city. Tanks and the mechanized strategy of Blitzkrieg counted for nothing in an urban warfare. Because of the close proximity of the large city, the maneuverability of tank was impossible and not effective. Paradoxically, a sniper was more effective than a tank. Many times the soldiers used knives and bayonets to kill each other. The lack of supplies, harsh elements, and stubborn Soviet resistance eventually led to the defeat of the German Army.