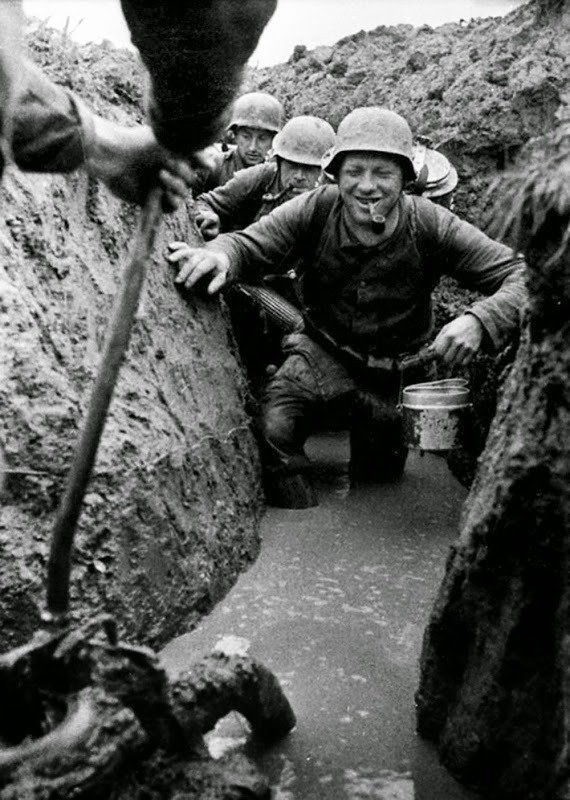 German soldiers in the flooded trenches, 1943.

The cheerful German soldiers in the trenches filled the autumn rains spread the food for their comrades. Water is pumped out of the trench using a mechanical pump. Photo taken during Battle for Velikiye Luki, October, 1943. With the advent of mechanized warfare, soldiers occupying trenches to conduct long-term combat operations were largely obsolete. Relatively little use was made of trenches in the mobile warfare of World War II in Europe. Usually they were used for defensive, supply storage, place to sleep and eat, and medical purposes.

Trench Foot is a medical condition caused by prolonged exposure of the feet to damp, unsanitary, and cold conditions. It is one of many immersion foot syndromes. Affected feet may become numb, affected by erythrosis (turning red) or cyanosis (turning blue) as a result of poor vascular supply, and feet may begin to have a decaying odor due to the possibility of the early stages of necrosis setting in. As the condition worsens, feet may also begin to swell. Advanced trench foot often involves blisters and open sores, which lead to fungal infections. If left untreated, trench foot usually results in gangrene, which can cause the need for amputation. 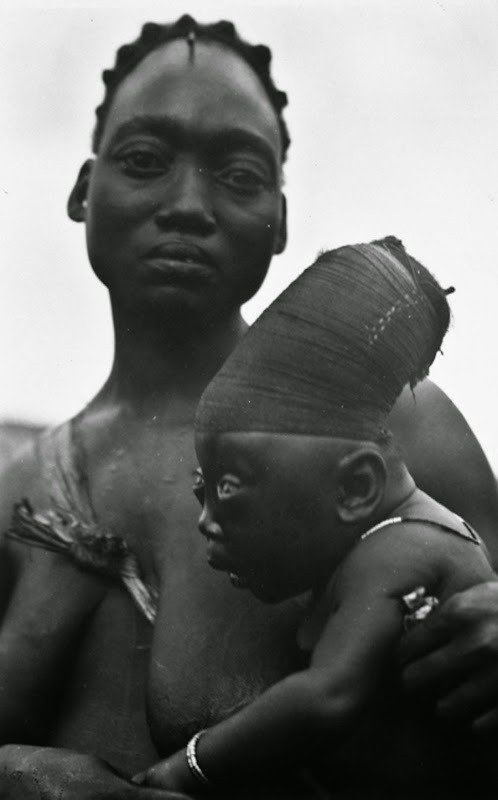 An elongated head was an ideal of beauty among the Mangbetu people, 1930.

The Mangbetu people had a distinctive look and this was partly due to their elongated heads. At birth the heads of babies’ were tightly wrapped with cloth in order to give their heads the elongated look. The custom of skull elongation called by the natives Lipombo, was a status symbol among the Mangbetu ruling classes. It denoted majesty, beauty, power and higher intelligence. Deformation usually begins just a month after birth for the next couple of years until the desired shape has been reached or the child rejects the apparatus.

The practice began dying out in the 1950s with the arrival of more Europeans and westernization. It was also outlawed by the Belgian government, who ruled over colonial Congo. This deformation usually didn’t affect the brain. As long as intracranial pressure remains the same as with a normal person, the brain should was able to adapt and grow into the new shape of the skull, resulting in no damage beyond cosmetic changes. The brain is a developmentally plastic organ and grows (expands) in the shape it’s given. 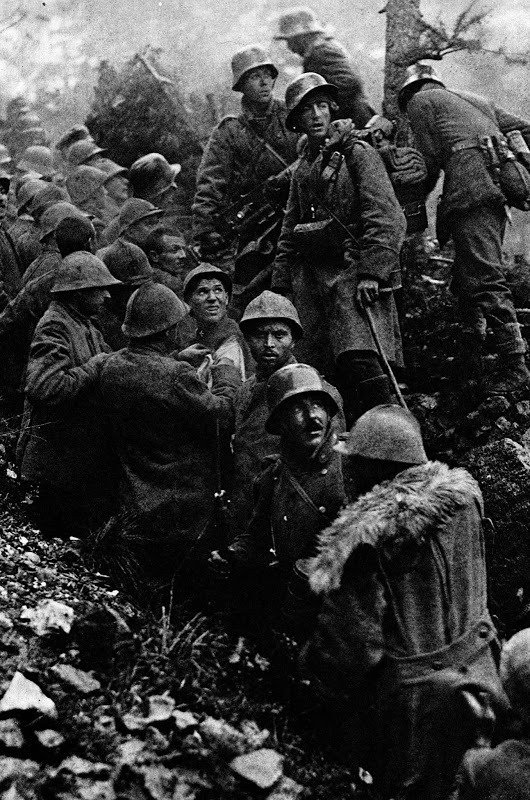 Captured Italian soldiers are escorted to the rear by German soldiers during the Battle of Caporetto, 1917.

Austro-Hungarian forces, reinforced by German units, were able to break into the Italian front line and rout the Italian army, which had practically no mobile reserves. The battle was a demonstration of the effectiveness of the use of stormtroopers and the infiltration tactics developed by Hauptmann Willy Rohr. The use of poison gas by the Germans played a key role in the collapse of the Italian Second Army. Initiated with a heavy artillery barrage of high explosives, gas and smoke, the combined force broke through the Italian Second Army’s lines almost immediately. They progressed a remarkable 25 km by the close of the day, adopting infiltration tactics and exploiting breaches in the Italian line with the use of grenades and flamethrowers. 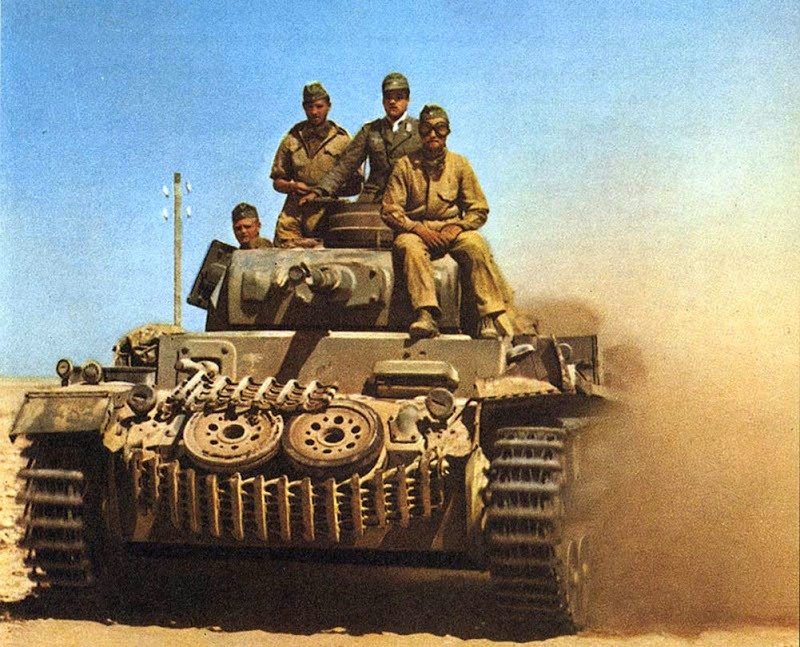 Panzer III design was composed of four sections – hull, turret, and front superstructure with the opening for the turret and rear superstructure with the engine deck. Each section was of a welded construction and all four were bolted together. The hull was divided into two main compartments divided by a bulkhead. The front compartment housed the gearbox and steering mechanism and the rear one both the fighting and engine compartment. Basic hull, turret, superstructure and crew layout remained unchanged throughout the production life of Panzerkampfwagen III series. 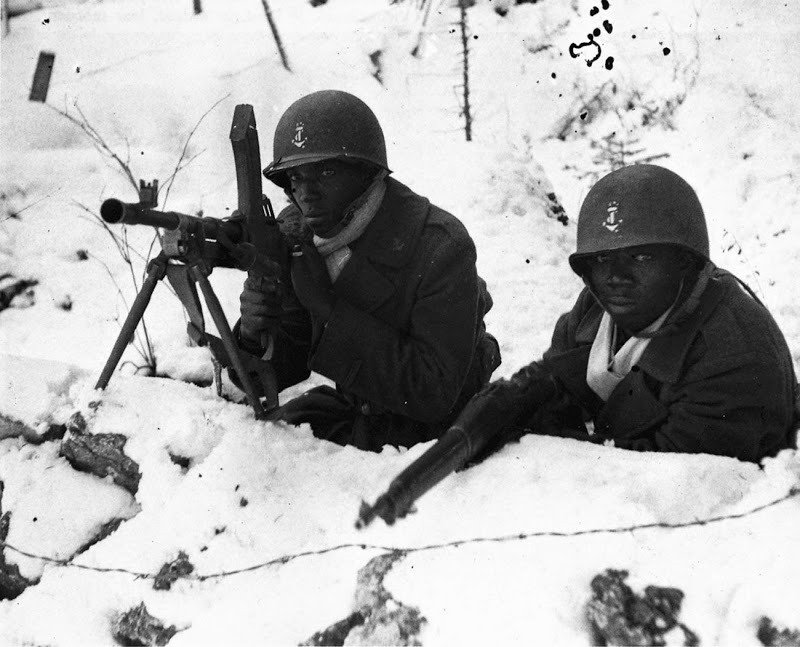 Soldiers from the French African colonies holding a position at Boucle du Doubs, near Besancon, France, winter of 1944. These soldiers are from Senegalese Free French troops. They are armed with a British Bren and an American 1903 Springfield. The helmets are American ones, emblazoned with the anchor emblem of the French Colonial forces. The Free French used a wide array of Allied equipment.

France at the time of World War II had many colonies in Africa. Before the War, France recruited Africans both to serve in African colonia connstabularies and the French Army. Unlike the situation in France itself, the colonial soldiers were all volunteers. During World War II these African troops played an important role. The Tirailleurs Senegalais troops were used in even greater numbers, initially by Vichy France and later by the Free French. In 1940, African troops comprised roughly 9% of the French army. The French recruited more than 200,000 black Africans during the war. Approximately 25,000 were killed in battle. Many were also interned in German labor camps and thousands of black prisoners of war were murdered by the Wehrmacht. After the Liberation of France, the African troops were removed from service in Europe and replaced with white soldiers on the order of Charles de Gaulle, a process known as “blanchiment” (whitening). 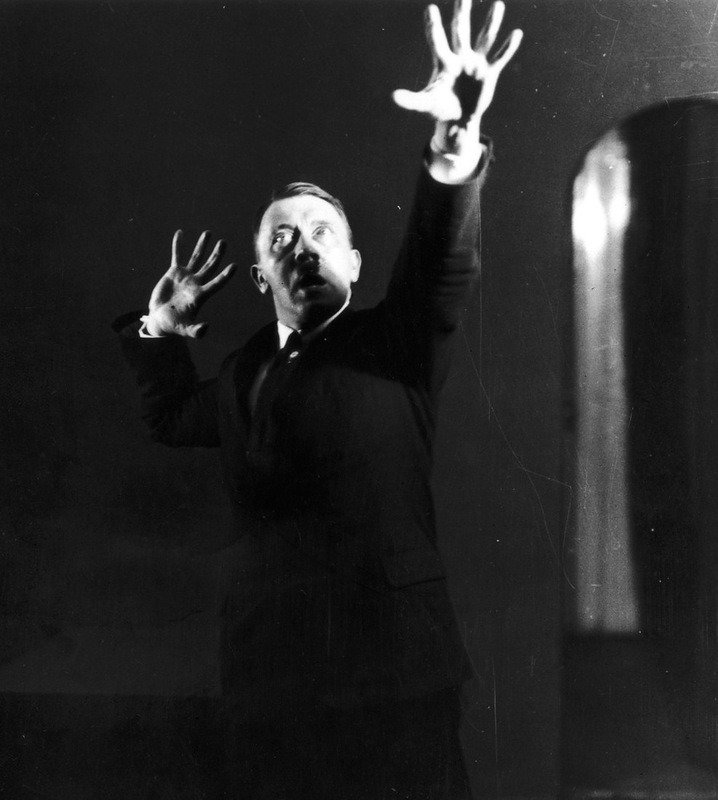 Adolf Hitler, leader of the Nazi Party, strikes a pose for photographer Heinrich Hoffmann whilst rehearsing and listening his recorded speech, 1925. The album, features black and white images of the Nazi leader in a series of poses, using expressive face and hand gestures, which he would practice and review before addressing the German public. They capture the meticulous training Hitler undertook to perfect his famous speeches, and give a rare insight into his vanity and controlling personality. Once he saw the pictures, he would decide whether to incorporate the various gestures and poses into his speeches and appearances.

The photos were reportedly taken in 1925, soon after Hitler was released from a nine-month stint in prison during which he dictated his autobiography, Mein Kampf. After seeing the photographs, Hitler requested Hoffmann to destroy the negatives, but he didn’t obey. They were published in his memoir, “Hitler was my friend”, which came out in 1955. Hoffmann, who introduced Hitler to his then-studio assistant Eva Braun, survived the war and spent four years in prison for Nazi profiteering. He died in 1957, aged 72. 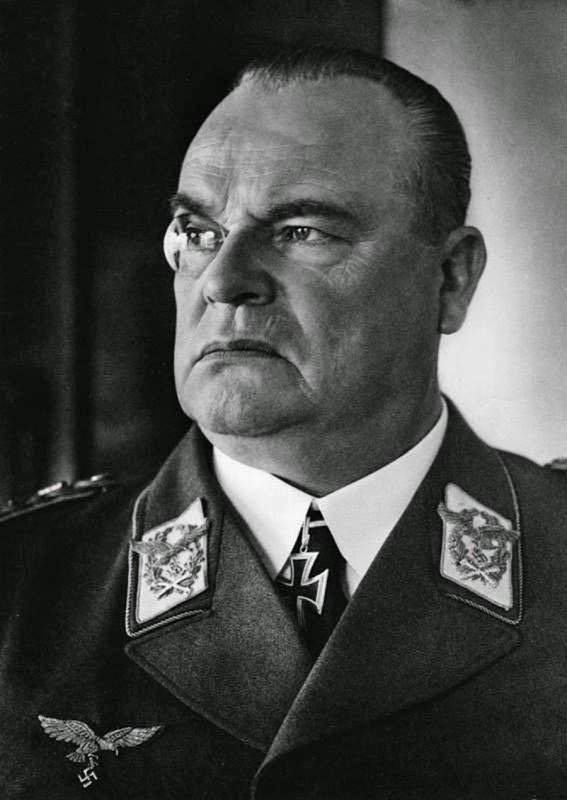 Hugo Sperrle, Generalfeldmarschall of the Luftwaffe, 1940.

Hugo Sperrle was a German field marshal of the Luftwaffe during World War II. His forces were deployed solely on the Western Front and the Mediterranean throughout the war. By 1944 he had become Supreme Commander of the Luftwaffe in the West. It is often tempting to ascribe personality traits to people on the basis of their photographs and this can of course at times be very misleading. However, in this picture, Sperrle does look like a determined man and not one to be trifled with. Contrast this photograph with the one of him taken during his war-crimes trial. 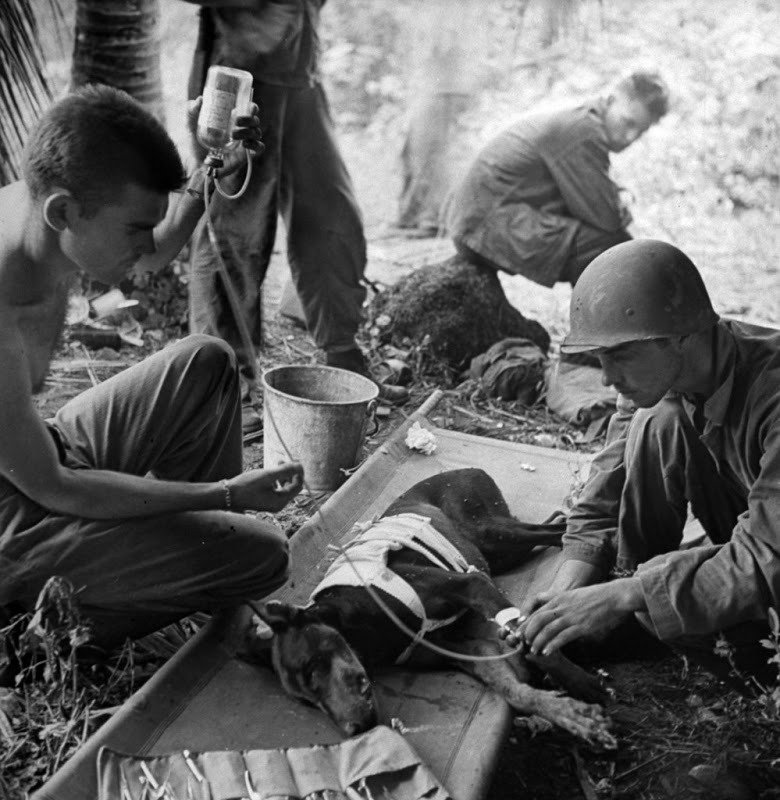 Wounded combat dog during action on the Orote Peninsula, 1944.

In the late summer of 1942, the Marine Corps decided to experiment with the use of dogs in war, which may have been a new departure for the Corps, but not a new idea in warfare. Since ancient times, dogs have served fighting men in various ways. The Romans, for instance, used heavy mastiffs with armored collars to attack the legs of their enemies, thus forcing them to lower their shields. On Guam, First Lieutenant William R. Putney commanded the 1st Dog Platoon and was the veterinarian for all war dogs on Guam. First Lieutenant William T. Taylor commanded the 2d Platoon. Both landed on the Asan-Adelup beach on Guam, while the 1st Platoon under Gunnery Sergeant L. C. Christmore landed with the 1st Provisional Brigade at Agat.

Man and dog searched out the enemy, awaited his coming, and caught him by surprise around the Marine perimeter or while on patrol. In addition, they found snipers, routed stragglers, searched out caves and pillboxes, ran messages, and protected the Marines’ foxholes as they would private homes. The dogs ate, slept, walked, and otherwise lived with their masters. The presence of dogs on the line could promise the Marines there a night’s sleep, for they alerted their handlers when the enemy came near. Overall, some 350 war dogs served in the Guam operation. 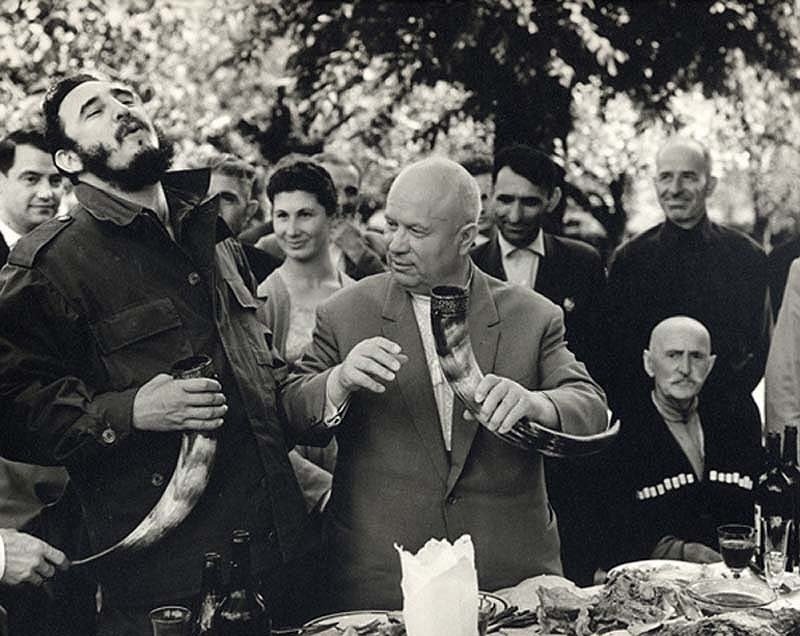 Fidel Castro and Nikita Khrushchev drinking wine from a drinking horn in the Soviet Republic of Georgia,1963.

The relationship between Fidel Castro and Nikita Khrushchev began when Cuba became a communist country and Cuba started to establish close relations with the Soviet Union. Both Fidel and Nikita shared the same beliefs, such as communism was the best type of government rather than capitalism. During the Cold War, Cuba relied on the Soviet markets and military aid.

On the 27th of April, 1963, the leader of the Cuban Revolution paid his first visit to the USSR, that journey lasted for forty days. He managed to see a lot of cities and visit numerous factories, secret military bases, a nuclear submarine, walk along Moscow without security guards, talk to the authorities and ordinary people. He became the first foreigner who came up to the podium of the mausoleum and even received the title of Hero of the Soviet Union. 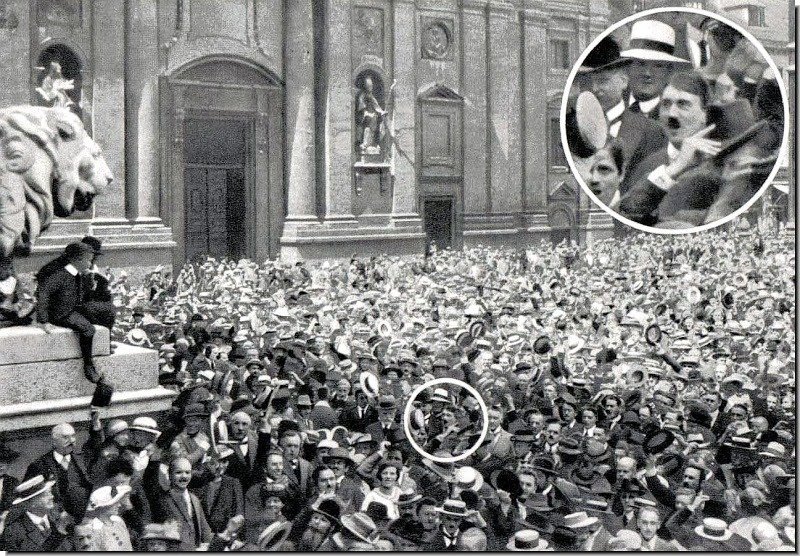 A young Hitler cheers the start of World War One, 1914.

The photo was taken by Munich photographer Heinrich Hoffmann at a rally in support of war against the allies in Munich’s Odeonplatz on August 2, 1914. But it was not until March 12, 1932 that it was published in the Nazi party newspaper The Illustrierte Beobachter, or “Illustrated Observer,” the day before the presidential election, after Hitler’s opponents had attacked Hitler over his flight from military service in Austria-Hungary and questioned his patriotism.

The caption on the original printed picture reads: “Adolf Hitler, the German patriot in the middle of the crowd stands with blazing eyes”. Hitler was superimposed to lend credibility to the image of the Nazi leader as a patriot and a man of the people. The photo went on to become a favorite Nazi propaganda picture, appearing with captions such as “Adolf Hitler: A man of the People”. It was used countless times in newspapers, propaganda papers, biographies and school books.

Hoffmann, who was one of the founders and the main supplier of pictures for the Nazi paper, always claimed he had discovered Hitler in the photo by chance after the future Führer visited his studio in 1929. When Hoffmann was told by Adolf Hitler that he was there during the Declaration of War in 1914, Hoffman scoured and scrutinized every picture he had of that momentous day. Hoffmann then dug out a glass picture negative he’d planned to throw away and found Hitler in the image. “I only needed to search for a very short time, one standing there, yes, it’s him – his hair falls over the forehead,” Hoffmann once said. “His face cannot deceive – it is him”.

The event of the Declaration of War in 1914 was filmed and the footage was examined later and Hitler was identified clearly in it. It even shows Hoffman himself taking photos. So the photo is not fake, Hitler was there in the crowd, although the original glass-plate negative (which was Hoffmann’s property) has never been found.