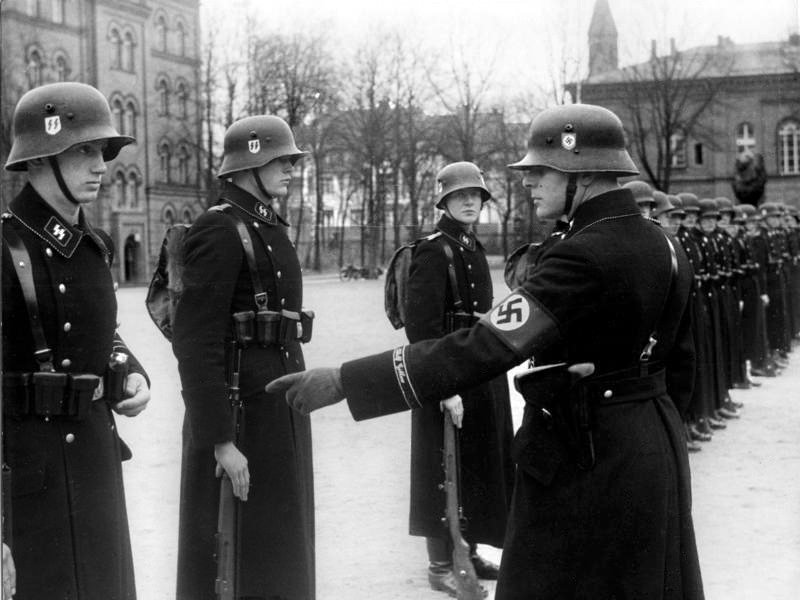 The LSSAH provided in the Nazi period for government officials, security personnel and government buildings. It was located in the rebuilt after World War II to “Barracks Royal Prussian Cadet School” former military academy in Berlin Lichterfelde West, where the training of recruit took place. The LSSAH represented the pinnacle of Hitler’s Aryan ideal. Strict recruitment regulations meant that only those deemed sufficiently Aryan—as well as being physically fit and National Socialists—would be admitted. 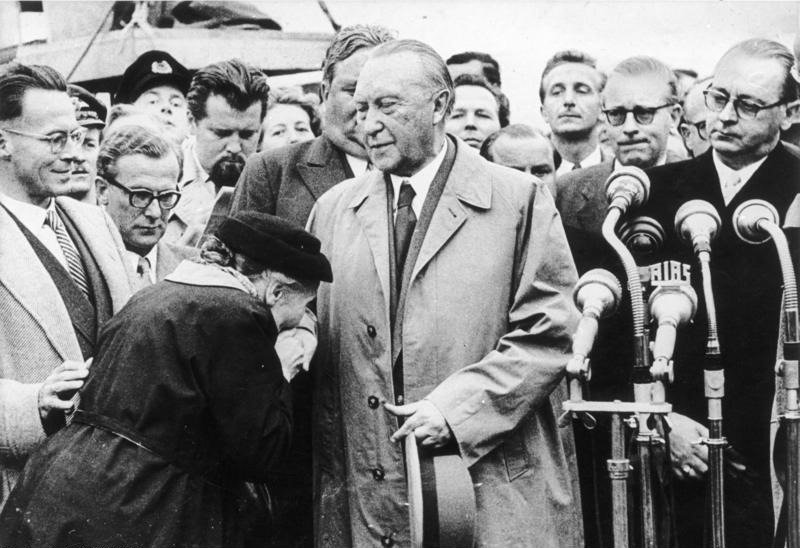 The mother of a prisoner thanks Konrad Adenauer upon his return from Moscow on September 14, 1955. Adenauer had succeeded in concluding negotiations for the release to Germany, by the end of that year, of 15,000 German civilians and prisoners of war. Konrad Adenauer personally negotiated the whole thing with the Soviet government, resulting in a huge boost in popularity for him and pictures like this one.

The event this famous photo was taken on is part of what’s known as “Die Heimkehr der Zehntausend” (The Return of the 10,000), as they were the last German POWs in the Soviet Union to be released. The return of the German prisoners of the war was part of a Soviet campaign to establish diplomatic relations with Western Germany, which was widely unpopular in the Eastern Block and the Soviet Union itself. 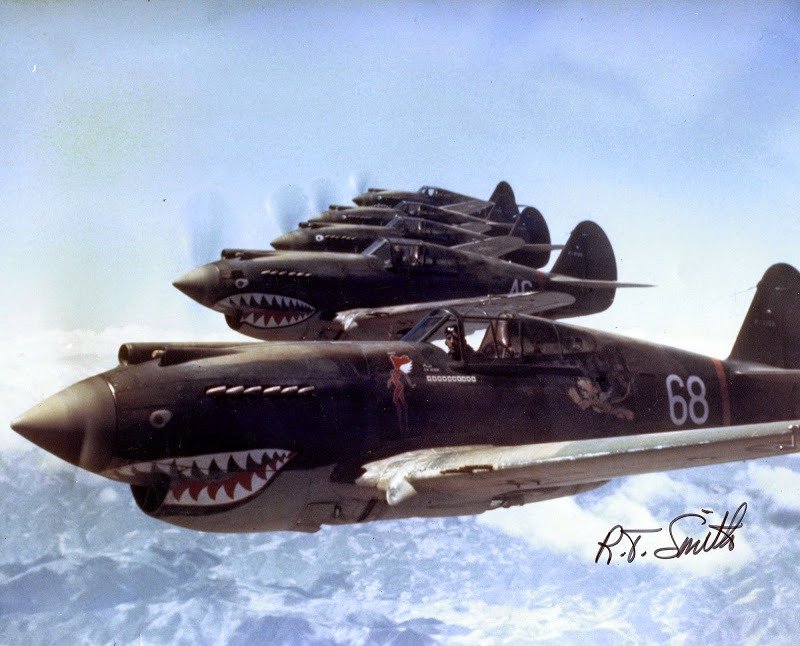 The Flying Tigers are flying in close formation. Every pilot in that picture is looking at the airplane next to him and trying to maintain his position by maintaining the same view of his neighbor. The pilot in front looking at the camera plane is doing the same thing. Planes were much slower and simpler back then. That kind of formation today would be the stuff of stunt fighters. Flying that close was usually done in bad weather so you could maintain visual contact with the guy in front of you, and so forth to the flight lead.

The Flying Tigers were a group of American fighter pilots that flew for China in the early part of 1942. Led by a controversial American, Colonel Claire Chennault, they were actually called the “American Volunteer Group” (AVG), and achieved good success in their aerial battles against the Japanese. They were a relatively small group, and never had more than 100 Curtis Warhawk P-40’s (decorated with the famous red shark mouth) available.

“Colonel” Claire Lee Chennault had been in China since the mid-Thirties; he called himself “Colonel,” though his highest rank had been Major. An outspoken advocate of “pursuit” (as fighter planes were called then), in an Army Air Force dominated by strategic bomber theorists, he alienated many of his superiors. But in China, equipped with P-40’s, he developed the basic fighter tactics that American pilots would use throughout the war. The Japanese planes used over China were much more maneuverable than his Warhawks, whose advantages were: speed in a dive, superior firepower, and better ability to absorb battle damage. Chennault worked out and documented the appropriate tactics that capitalized on the relative strengths of the American fighters: intercept, make a diving pass, avoid dogfighting, and dive away when in trouble. This remained the fundamental US fighter doctrine throughout the Pacific War. 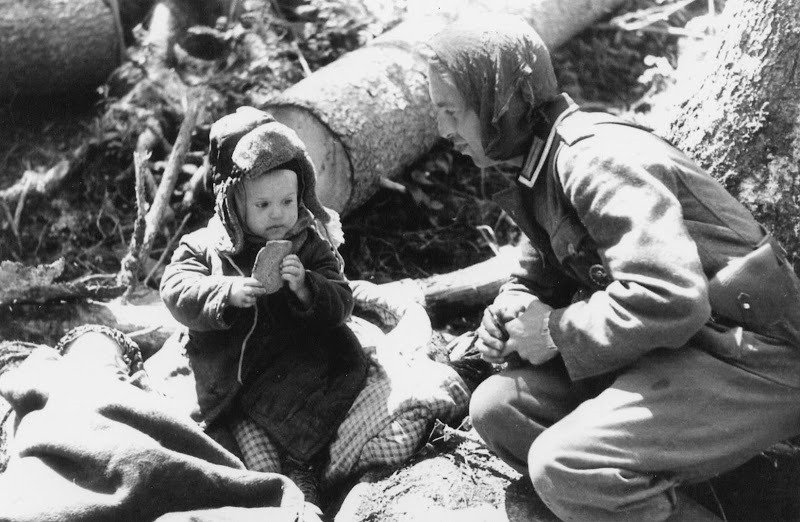 Heartbreaking to think this soldier might have had a child the same age at home. It really shows the humility and humanity of the people in the war. Just because they perceived each other as the “enemy” doesn’t mean either of them were more or less good than than the other. At the end of the day, everyone is still human. Photo taken on Volkhov area. 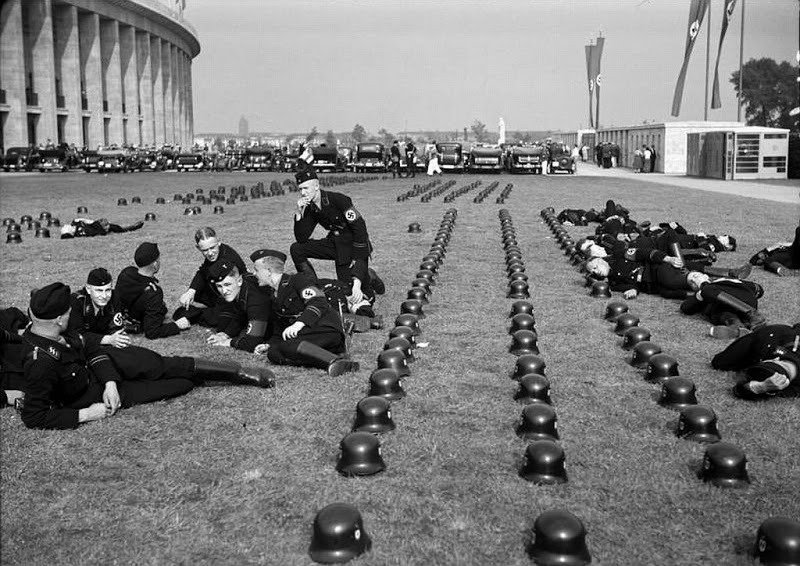 German SS troops relaxing at the 1936 Olympic Games in Berlin.

Members of Leibstandarte SS “Adolf Hitler”, at this time the regiment size unit acted as Hitler’s personal bodyguard and guard of honor in public ceremonies. Later it would grow to form the Elite 1st SS Division LAH. They were assigned with the task of being Hitler’s personal bodyguards, a massive legion of SS soldiers would follow the Fuhrer wherever he went. They were also deployed in combat and were one of the most competent units in history. 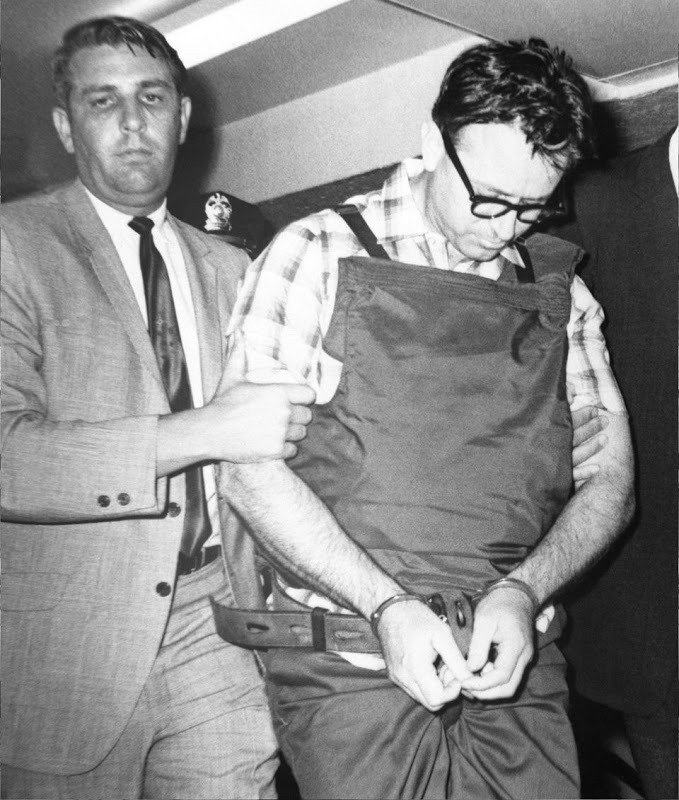 James Earl Ray, Martin Luther King’s assassin, being led to his cell after his arrest in London, 1968.

The FBI put him in a bullet proof vest, they weren’t going to take any chances after Lee Harvey Oswald. Martin Luther King was shot and killed by a sniper on April 4, 1968, while standing on the second-floor balcony of the Lorraine Motel in Memphis, Tennessee.

On April 4, 1968, Ray stood in the bathtub of a shared bathroom, balanced his rifle on a window ledge and shot King as the civil rights leader. After shooting King, Ray immediately fled, setting off a manhunt that would last more than two months and cover five countries. At the time, it was said to be the FBI’s most expensive and biggest investigation in its history. Finally, on July 19, 1968, the FBI caught up with Ray in London and extradited him to the United States. Ray pleaded guilty to the murder, something he’d spend the rest of his life trying to reverse, and was sentenced to 99 years in prison.

Exactly what led James Earl Ray to kill Dr. Martin Luther King Jr. continues to be a source of debate, as does his role in the murder. Evidence does suggest that Ray had little stomach for the integration policies that were sweeping the country. In addition to his segregationist beliefs, he also saw a big payday, some historians have said, in killing black leaders like H. Rap Brown, Stokely Carmichael and, of course, King. 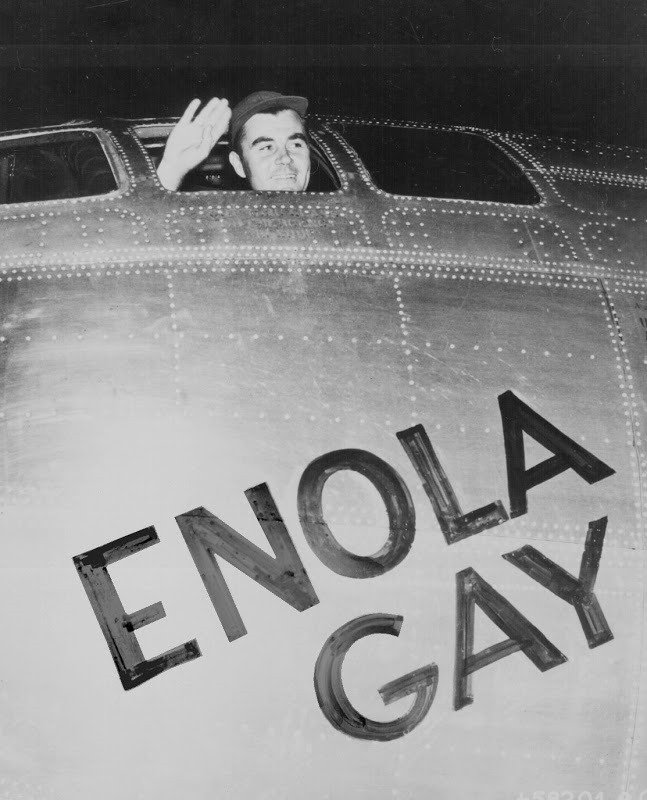 Captain Paul Tibbets in the Enola Gay minutes before takeoff to drop the first atomic bomb on Hiroshima, 1945.

The Enola Gay was a bomber, named for Enola Gay Tibbets, the mother of the pilot, Colonel Paul Tibbets, who selected the aircraft while it was still on the assembly line. On 6 August 1945, during the final stages of World War II, it became the first aircraft to drop an atomic bomb.

Unlike the bombs with which the US Air Force had scorched Japan for roughly a year, this bomb was not filled with the usual incendiaries. Rather than isobutyl methacrylate or its more famous kin, Napalm, this bomb was packed with two masses of highly enriched uranium-235. The bomb, named “Little Boy”, was anything but: snout-nosed and weighing in at 9,700 pounds (4,400 kg), it resembled nothing more than an obese metal baseball bat. At 8:15 a.m. local time, poised above Hiroshima’s Aioi Bridge, Little Boy dropped. 44.4 seconds later it detonated. 60,000 people died instantly. 31,000 feet above (9,500 meters), and 10 and a half miles away from them, Paul W. Tibbets, en route to Guam, felt a 2.5g shockwave driven before a kaleidoscopic pillar of smoke and debris. He felt no regrets.

In a 1975 interview Paul Tibbets said: “I’m proud that I was able to start with nothing, plan it and have it work as perfectly as it did. I sleep clearly every night”. “I knew when I got the assignment,” he told a reporter in 2005, “it was going to be an emotional thing. We had feelings, but we had to put them in the background. We knew it was going to kill people right and left. But my one driving interest was to do the best job I could so that we could end the killing as quickly as possible.” 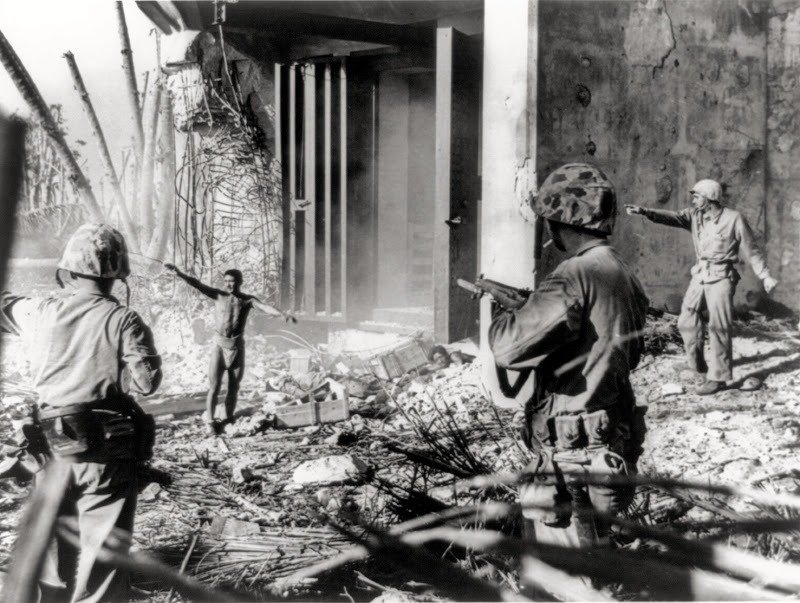 He is naked because he was probably ordered to strip so he wasn’t concealing a weapon or explosive. It was very rare for Japanese soldiers to surrender as it was deemed dishonorable. Those huge steel doors, and thick walls, must be a bunker of some kind. Probably a bunker with an artillery gun inside, maybe a coastal battery. 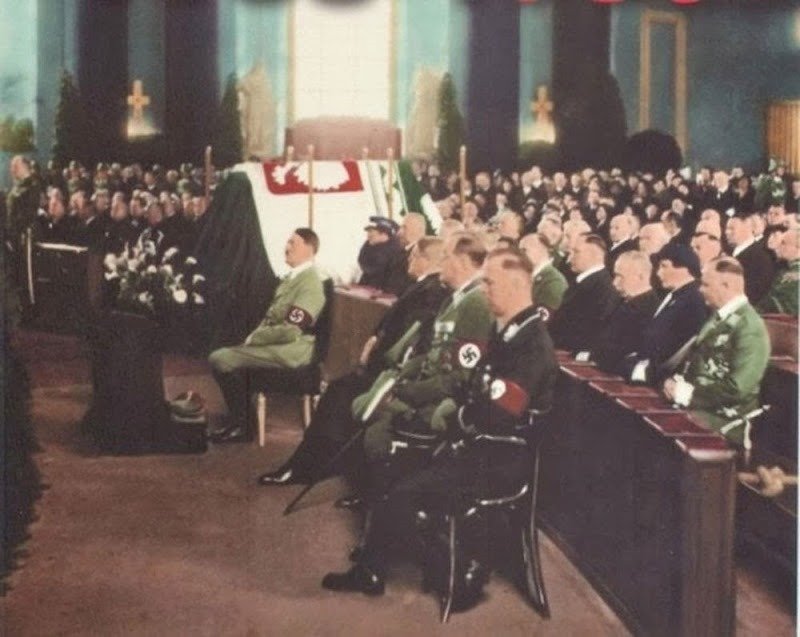 The head of Poland Józef Piłsudski died on May 12, 1935. His funeral was made few days later in Warsaw. But in Berlin there was a service for Piłsudski ordered by Adolf Hitler. In the picture you can see Adolf Hilter during the service for Piłsudski and a symbolic coffin with a Polish flag and eagle. This is the only time that Fuhrer has attended a holy mass as a leader of the Third Reich and probably one of the last times when he was in a church.

Even though Hitler had special sympathy to Pilsudski, he didn’t go to his funeral and sent Ribbentrop in his place. The photo with Hitler is taken during the memorial service in Berlin. In 1939 when the Germans took Kraków (Krakau) Hitler ordered the Wehrmacht to set at Piłsudski’s grave a honor guard. After he attacked Poland, he would say that things wouldn’t turn out like that if old Pilsudski was still alive. He was also very excited when Pilsudski congratulated him on winning the elections in 1933. 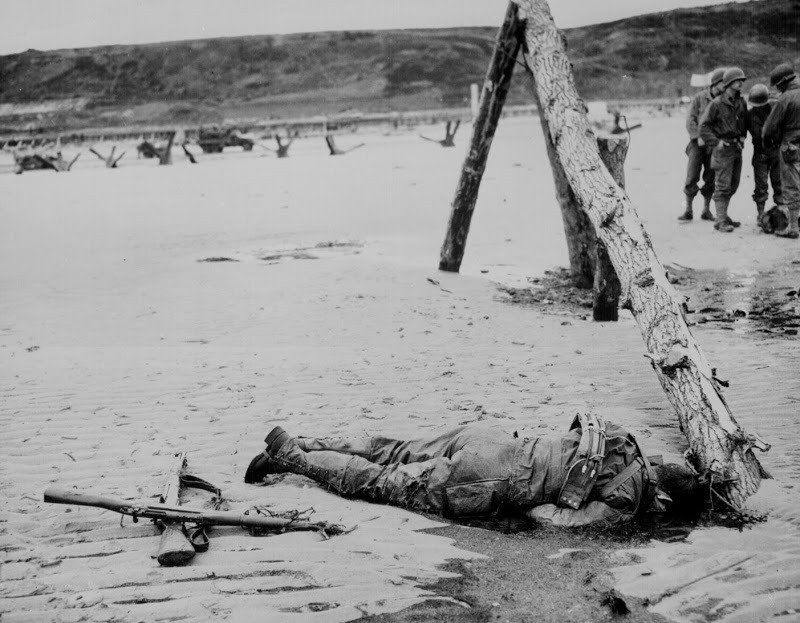 Crossed rifles in the sand are a comrade’s tribute to this American soldier who sprang ashore from a landing barge and died at the barricades of Western Europe, 1944. Some days after D-Day, Omaha Beach. It had to have been after the artillery was stopped. Those guys on the background aren’t standing around. They’re receiving orders or getting a briefing. Besides, they had stretcher-bearing details for recovering bodies.