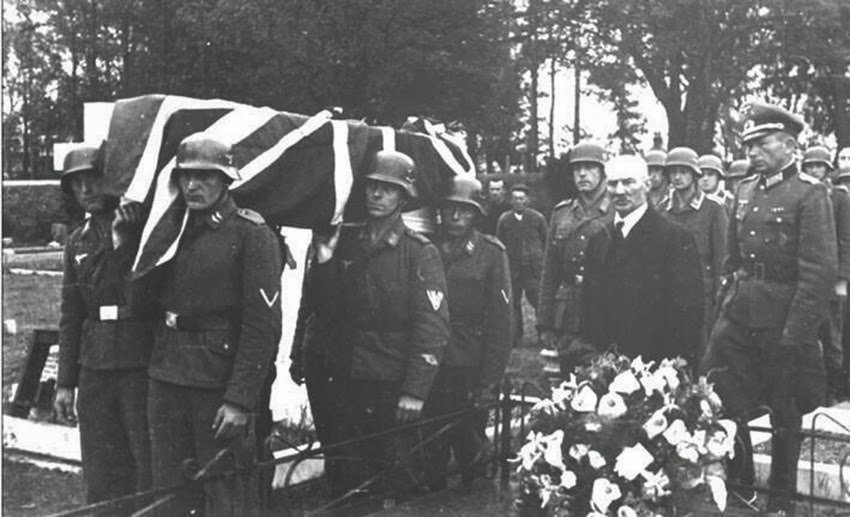 Full military honors were granted by the Luftwaffe at the funerals of R.A.F Sergeants Butlin and Holden who were shot down over Jersey, Channel Islands. It is thought this was to try and pacify the local population. The Luftwaffe behaved much differently than the SS or Wehrmacht. Much more chivalry. 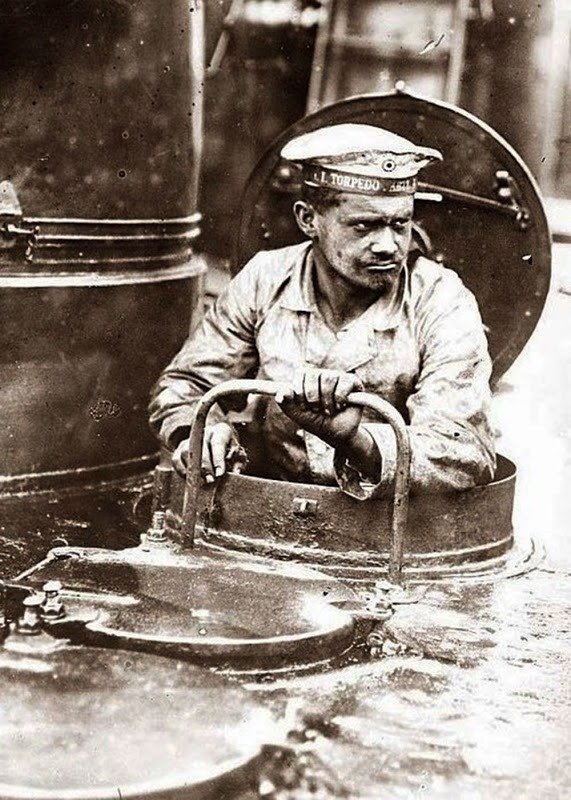 This U-boat crewman looks thoroughly unpleased with the situation. Patrols could be anywhere from 3 weeks to 6 months and during that time the crew were not able to bathe, shave or change their clothes regularly. The space to live in was small, the working condition were really bad, fumes and smog everywhere. It’s not difficult to imagine how unpleasant life would be for someone who had not taken a bath or had a proper change of clothing for six months.

However, the crew of German U-boats were treated like royalty when they docked because of the difficulty of their jobs. Upon docking, the crew filed out on shore leave and were generally given whatever they wanted while a cleaning crew scrubbed the submarine from top to bottom.

The crew of an U-boat was made up of specialists and seamen. Specialist crew, such as radioman, torpedomen and machineman were responsible for the operation and maintenance of equipment aboard the U-boat. Other general duty tasks such as loading torpedoes, standing watch on the bridge, operating deck guns and housekeeping activities were performed by the seamen. Their workload was divided into several shifts, with the seamen working in three 8 hour shifts – one for sleeping, one for regular duties and one for miscellaneous tasks. Specialist crew, such as the two radiomen had three four-hour shifts between 8am and 8pm, and two six-hour shifts during the night. 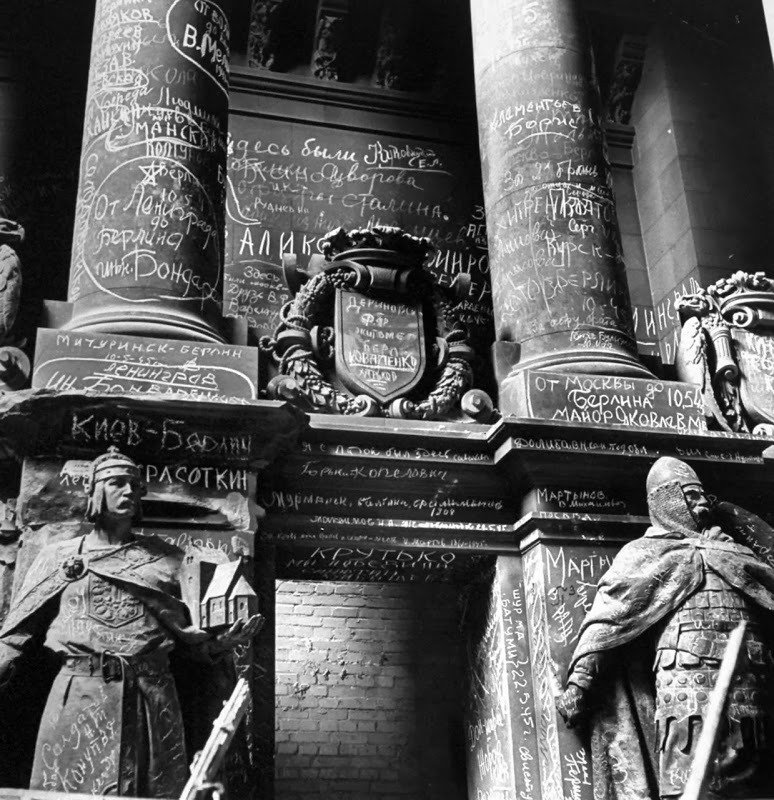 The Reichstag covered in graffiti after being seized from the Nazis by the Red Army, 1945.

After seizing the Reichstag in May 1945 and raising their flag on its roof, Soviet soldiers left their marks in other ways, writing their names, feelings, thoughts and hometowns on the walls of the famous building. Written in Cyrillic script, they include such slogans as “Hitler kaputt” and names of individual soldiers. Most of the writings are just “From [Russian City] to Berlin” or just “[Russian City] – Berlin” with a name or “Kilroyski was here”. On the base of the pillar on the right, directly above the statue’s head it says “From Moscow to Berlin, Major Yakovlev”. On the left pillar in the circle with the star it says “From Leningrad to Berlin” with a name after. 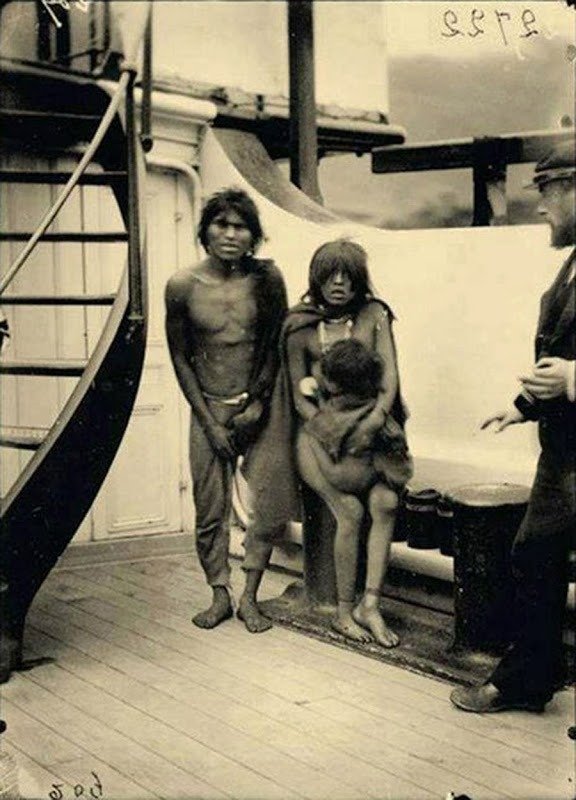 Selknam natives en route to Europe for being exhibited as animals in Human Zoos, 1899.

With the permission of the Chilean government in 1889, eleven Selk’nam natives including an 8-year-old were taken to Europe to be exhibited in Human Zoos. The Patagonian Indians were a rarity. Between 1878 and 1900, three groups of natives belonging to indigenous groups of Tehuelche, Selknam and Kawésqar were shipped to Europe to be exposed in Human Zoos. They were photographed, measured, weighed and were expected to perform every day. Sometimes 6 to 8 times a day. The Selknams did not receive the best of care. Therefore, many of them did not make it back. Some did not even make it to Europe.

But why would civilized people do such thing as showing other people on zoos? From a sociological point of view it’s understandable: a much more technologically advanced civilization lacking the modern day sensibilities and politically correctness finds a primitive civilization living in a neolithic fashion so they immediately assume they’re lower than them. It happened countless of times in history. In the Jiu Tang Shu (The History of the Tang Dinasty) you can find examples of black slaves brought to China by Arab merchants and slave traders who were then acquired by rich Chinese people and used by the nobility of Guangzhou as amusement (for example they were put as doorkeepers during parties to scare and impress the arriving guests). A few centuries after that the Emperor of China sent emissaries to Malindi (East Africa) to bring him exotic animals, they brought him a giraffe (which marveled the Emperor to no end, he called it a godly beast and ordered his best artist to honor the giraffe with a painting. 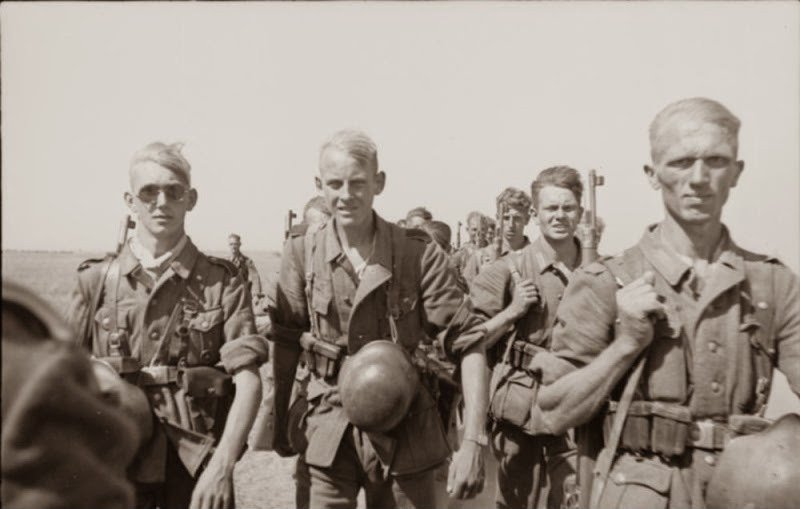 These kids had no idea what kind of hell was about to be unleashed on them. They’re literally marching to hell. It’s kind of eerie looking at the men in this picture and realizing that statistically speaking, they most likely never saw 1944. Those sunglasses are privately owned, probably pretty expensive. Sunglasses were only issued for Afrika Korps troops and for motorcycles, but not for infantry.

Based on previous battlefield successes, the Germans were expecting fierce fighting, but winning Stalingrad with reasonable losses. Up until that point, when it comes to ground war, the Germany had only experienced “setbacks”, such as the Battle of Moscow, following which, they continued to encircle and destroy the Soviets in the Spring of 1942. They still thought themselves to be unstoppable and were confident in their ultimate victory. The kind of brutal, unprecedented, close quarters street fighting and then utter devastation of an entire army in Stalingrad, was a completely new experience for them. Sure they knew there would be fierce fighting, but they weren’t expected to be involved on one of the most gruesome and horrible battles to ever be fought.

Out of the nearly 110,000 German prisoners captured in Stalingrad, only about 6,000 ever returned. Already weakened by disease, starvation and lack of medical care during the encirclement, they were sent on death marches (75,000 survivors died within 3 months of capture) to prisoner camps and later to labour camps all over the Soviet Union. Some 35,000 were eventually sent on transports, of which 17,000 did not survive. Most died of wounds, disease (particularly typhus), cold, overwork, mistreatment, and malnutrition.