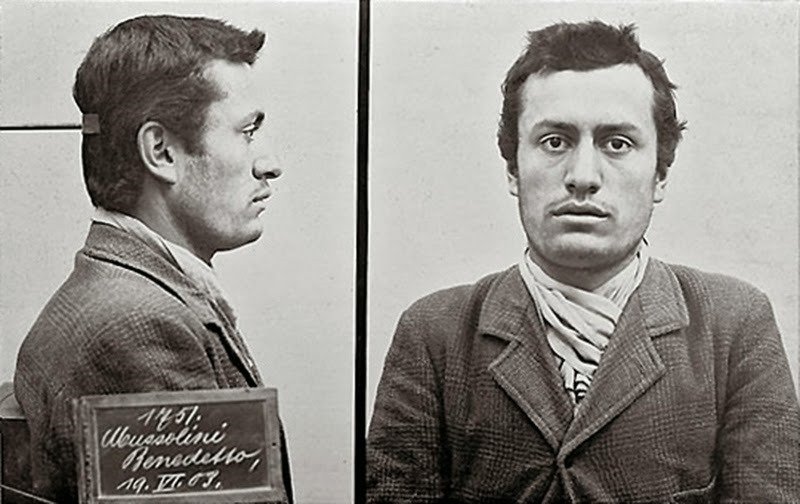 Here is part 35 of our continuing series of Interesting Historical Photos. If you missed our previous installment, click here for part 34. 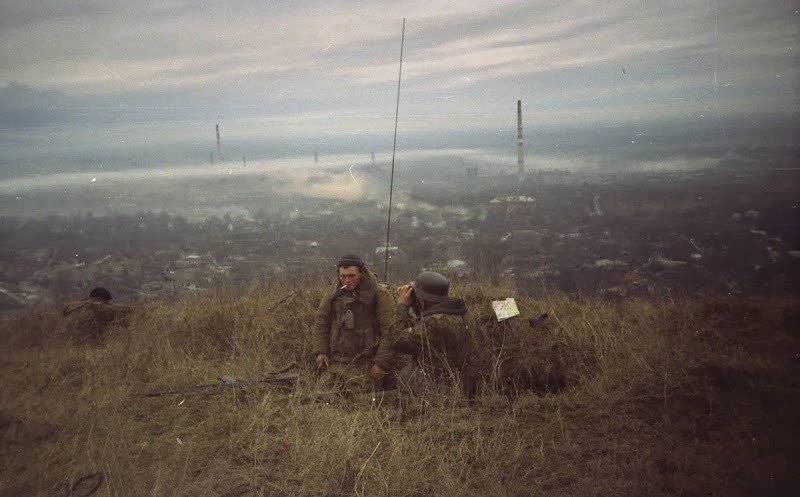 Russian soldiers, one of them wearing a WW2 German helmet, overlooking Grozny, 1999.

This is Second Chechen War, shot from Kirovo, near Grozny. They are not marines, just motorized infantry. About the helmet, the German Nazi helmet was seen as a talisman, as a good omen sign. These guys drab-olive gear and black “beanies” look just like what the inappropriately used Russian “Naval Infantry” (known as MorPekh) were wearing during the First Chechen. It’s “inappropriately used”, because MorPekh are meant to be used for amphibious landings and not in-land wars, but for the Chechen Wars, the Russians had to scramble every half-way combat-ready unit that they had.

In the summer of 1999 the warlord Shamil Basayev and his Arab friend Al Khattab, decided to invade the Russian Federal Republic of Dagestan from the neighboring, then-independent Chechnya, in order to create some kind of a trans-Caucasian Islamic Emirates Sharia state. They had some sympathizers among the locals and expected to be greeted as liberators, but most of the multi-ethnic, moderate Muslim people of Dagestan had actually armed themselves and fought back. The Islamists managed to capture some towns and villages, before the Russian military got there. There were up to 5,000 Chechen, Arab and other Islamic militants who participated in this invasion, which ended up triggering The Second Chechen War and Chechnya being brought back under Russian federal control. The Russian military was still in a pretty bad shape for that one, but they were better prepared and had learned most of their lessons. Several major Chechen warlords and their clans had switched sides, including the powerful clan of the current president of the Chechen Autonomous Republic, Ramzan Kadyrov. 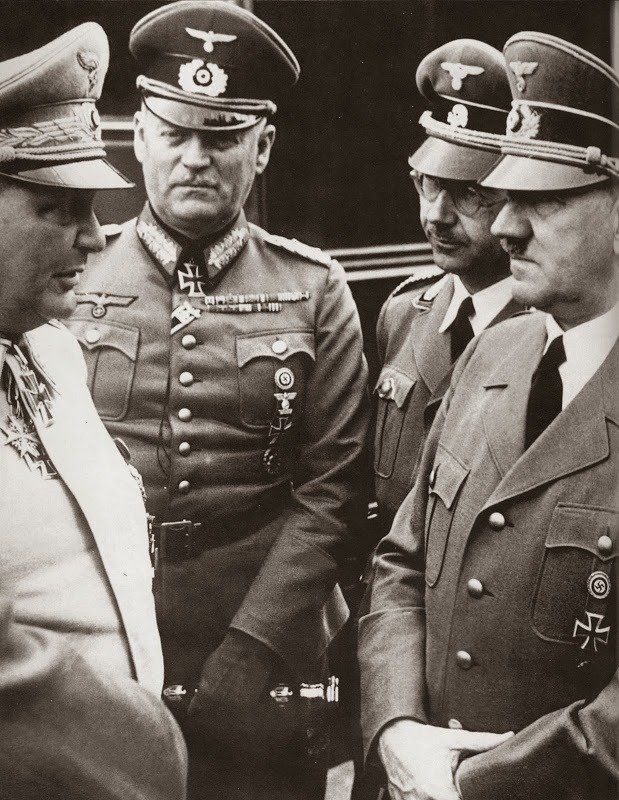 Five years later all the four would be dead, three suicides and a hanging. This is probably the last peaceful moment they had, two month later the invasion of Soviet Union would begin.

You can almost see the distaste that Himmler had towards Goring here. Goering was the head of the Luftwaffe and in the beginning Hitler’s right hand man. But after the Luftwaffe didn’t do good in the Battle of Britain, Goering fell out of favor with Hitler and was slowly pushed out by Himmler, who replaced him as number two. Goering was also a very corrupt man, he used his status to collect bribes, he collected property that was seized from Jews, while Himmler was the real evil driving the Nazis. He orchestrated the Holocaust and was the head of the SS and Gestapo. 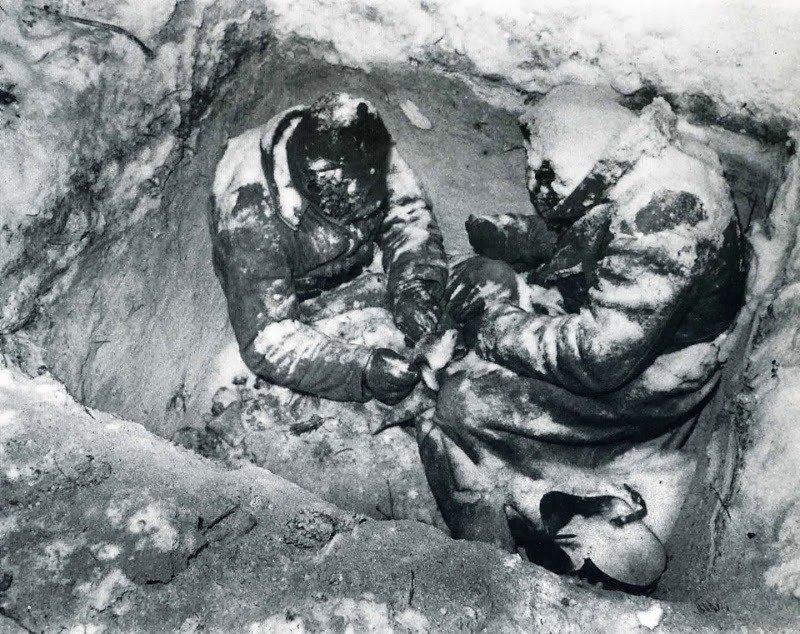 Two Soviet infantrymen frozen to death in their foxhole, Finland, 1940.

The Soviets had to bring troops from far away to the Finnish front. Some of the soldiers were from the south and hadn’t ever experienced winter conditions like this before, combine that with Finnish patrols destroying the support lines and the hardest winter in a lifetime. The lack of food and supplies was huge, they did lack winter warfare training and gear. The saddest thing about this is that just by covering that fox hole with some branches and putting snow on top the temperature in the foxhole would have risen to about -3 Celsius. With those heavy coats, the soldiers might even have felt necessity to strip some layers. But that’s what happens when you send untrained troops to the Front. The Soviets didn’t care too much for their soldiers training. 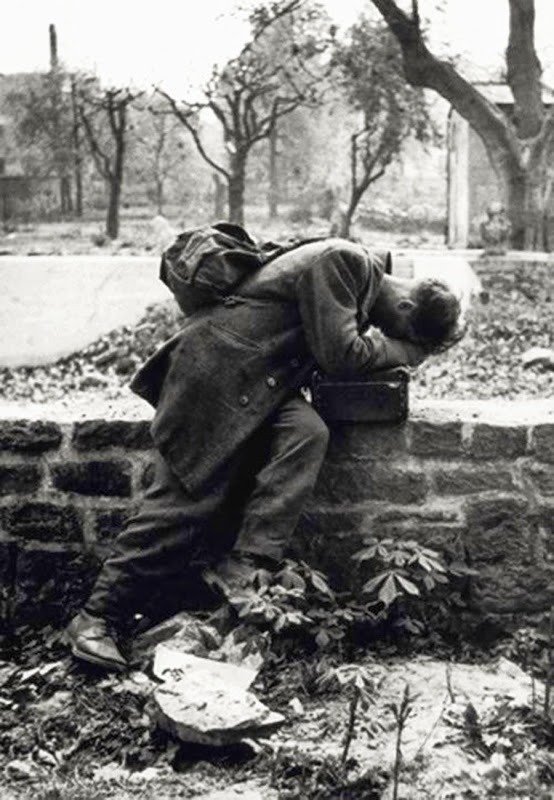 German soldier returns home only to find his family no longer there, 1946.

The photo of a German prisoner of war returning to his home town of Frankfurt to discover his house bombed and his family no longer there, shows the kind the depressing moments of dejected subjects we associate with images of war.

No stranger to scenes of despair, the photographer Tony Vaccaro caught the defeated man in the throws of grief, as the bombed shells of former houses loom eerily behind him. It’s a unimaginable pain, to be pulled into a war that would scar a country for generations to come and then to return home, seeking relief after all the hell you went through, to find no one there. 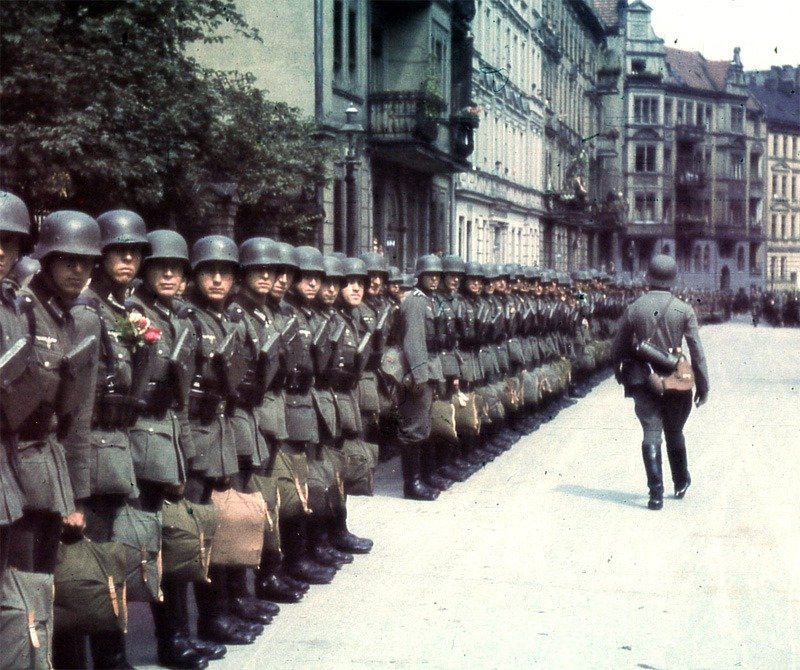 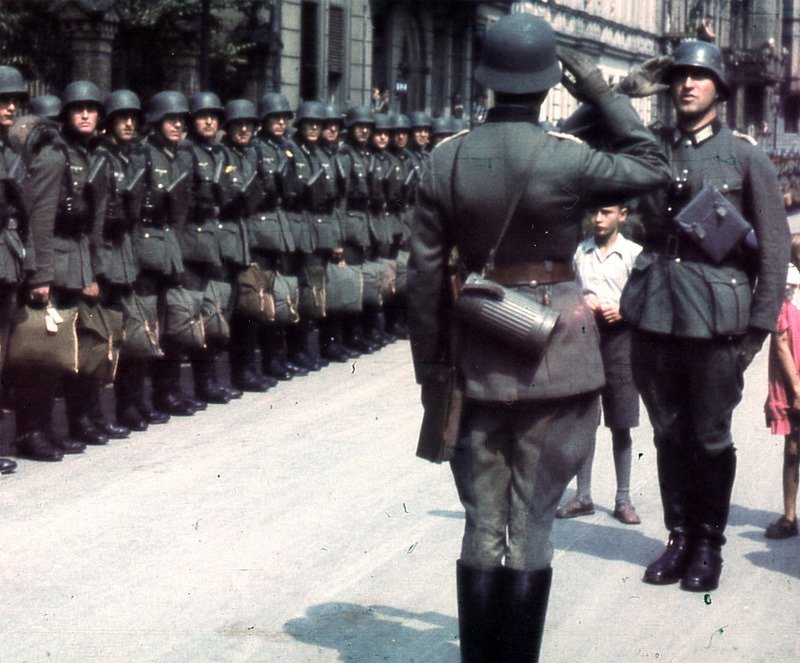 Looks like a handover of some sort, based on the satchels, the two officers saluting each other, etc., so it’s possible this would be a unit being shipped out of where ever it has been garrisoned. Judging by the flowers in one of the soldiers uniforms, the kids and the architecture, it’s probably in Germany. 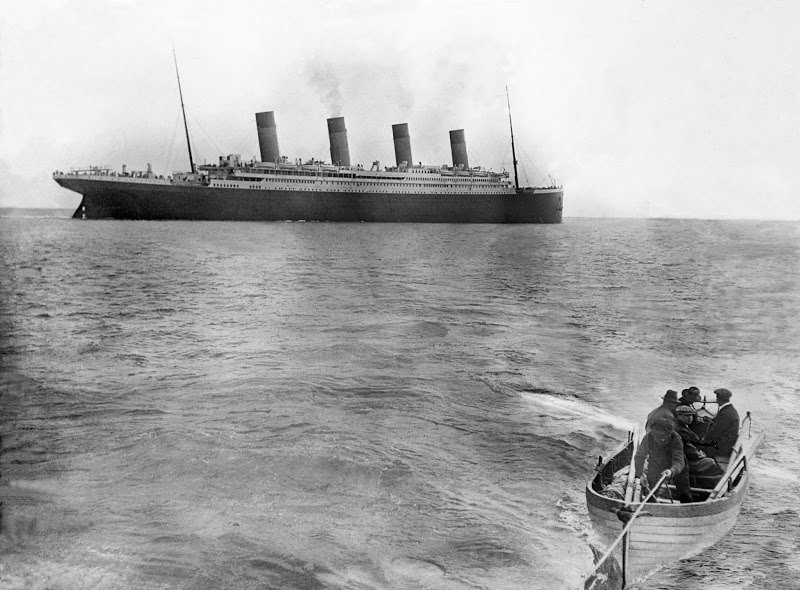 This photograph is the last known picture of RMS Titanic on the surface of the ocean. It was taken during her maiden voyage at Crosshaven, Ireland, just after the vessel departed Queenstown where it had stopped before heading westwards towards New York. Photo taken on April 12th, 1912. Three days after this photo was taken 1,514 people would be dead and the Titanic would be on the bottom of the North Atlantic after colliding with an iceberg in one of the deadliest peacetime maritime disasters in history.

According to Time Magazine this photo was taken by Irish Jesuit priest Francis Browne who sailed with the ship for the first leg of its journey, from Southampton (England) to Cobh (Ireland) then called Queenstown. The priest would have stayed for the remainder of the transatlantic journey too, having received an offer of a ticket from a wealthy family he befriended while on board. When Browne reached Cobh, however, he received a note from his clerical superior, ordering him to return to his station immediately rather than sail on with Titanic. 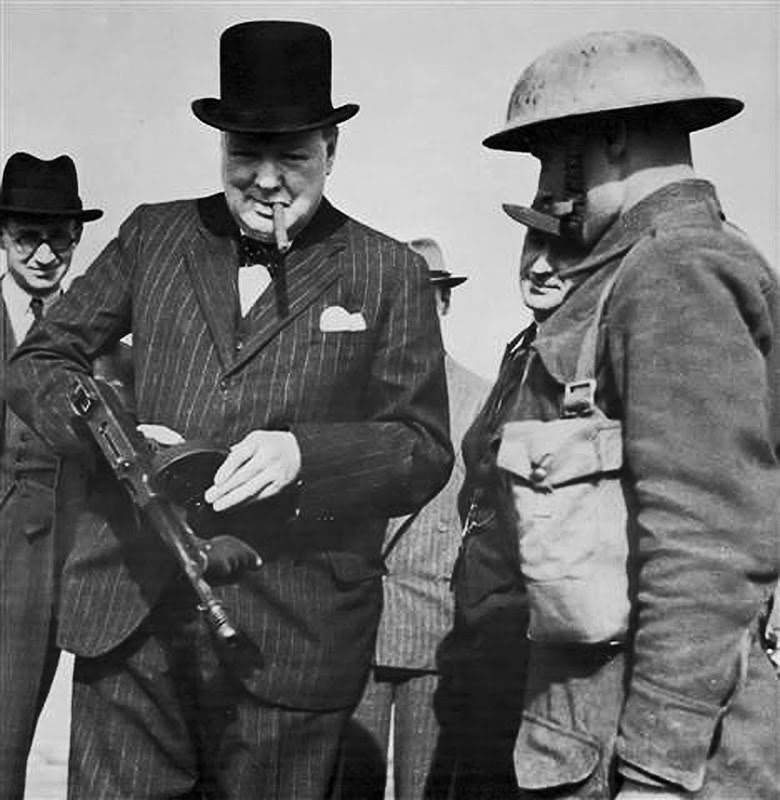 Winston Churchill with a Tommy Gun during an inspection near Hartlepool, 1940.

The interesting thing about this picture is that both the British and the Germans used it for propaganda purposes. The British photoshopped some soldiers out of the frame to make him more statesmanlike, while the Germans depicted him as an American gangster or a criminal. It’s an example of how he media can change your outlook on the world.

Nazi propaganda minister Goebbels saw the image as a god send and used it extensively domestically, with the other Axis countries, the few remaining neutral countries and even in air drops over the UK during the Battle of Britain with the text in English “WANTED,” and at the bottom, “for incitement to MURDER.” The reverse of the leaflet is all text: This gangster, who you see in his element in the picture, incites you by his example to participate in a form of warfare in which women, children and ordinary citizens shall take the leading parts. This absolutely criminal form of warfare which is forbidden by the Hague Convention will be punished according to military law. Save at least your own families from the horrors of war! 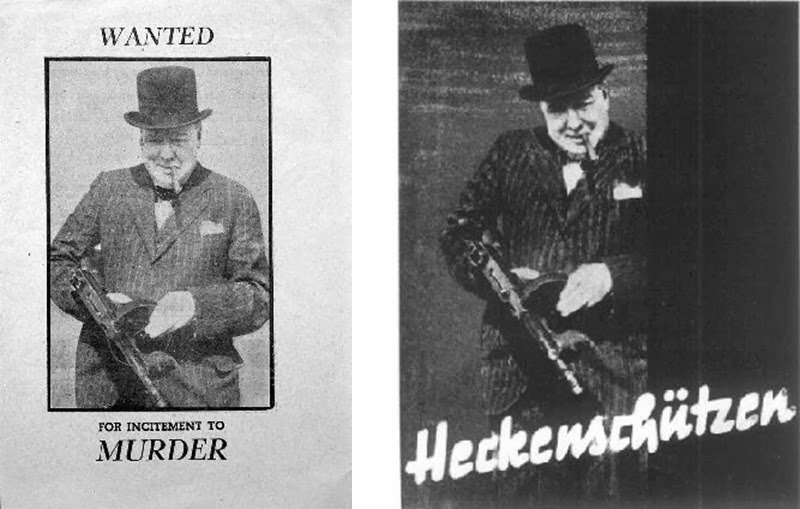 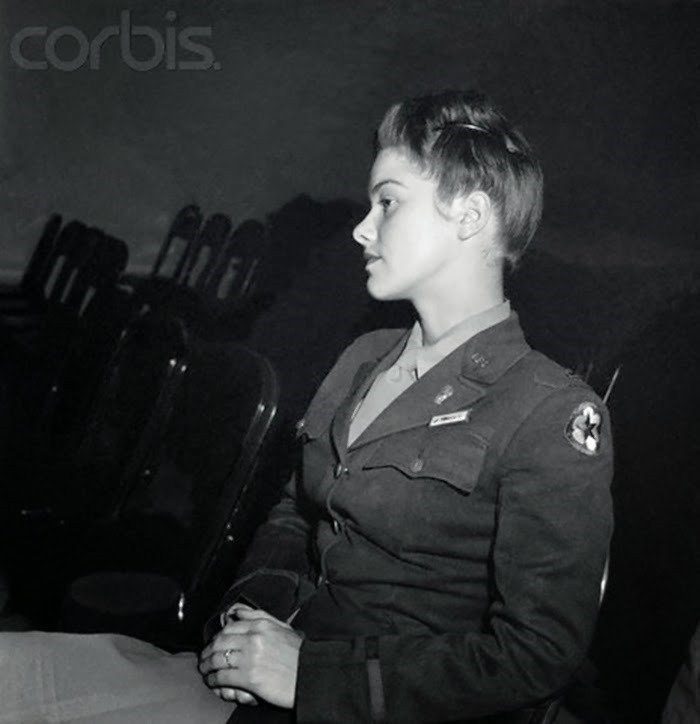 Fort Oglethorpe was a major training center for WAAC’s during WWII. It is no longer an active military post but the old fort grounds are still standing and house a US cavalry museum with displays of other branches and history of the fort. It, the fort, is located close to the Civil War battlefield of Chickamauga which is just south of the city of Chattanooga. The Chickamauga battlefield visitors center contains an extensive collection of arms and accouterments from the Civil War and some arms from other eras. It’s very interesting history on display.

Woman in a uniform have always an appeal. She is so amazingly beautiful. The uniforms were meant to be professional, feminine, attractive, and functional. Women were encouraged to be feminine (like wearing red lipstick) for morale. 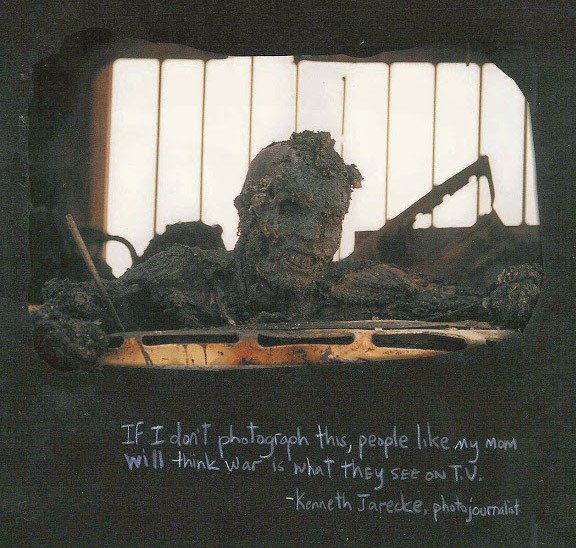 The Death of an Iraqi soldier, Highway of Death, 1991.

This photo at first was regarded by many editors as too disturbing to print, but later became one of the most famous images of the first Gulf War. The death of an incinerated Iraqi soldier on the Highway of Death, 1991.

The Highway of Death refers to a six-lane highway between Kuwait and Iraq, officially known as Highway 80. It runs from Kuwait City to the border town of Safwan in Iraq and then on to the Iraqi city of Basra. The road had been used by Iraqi armed divisions for the 1990 Invasion of Kuwait.

That soldier was an Iraqi who was the victim of a fuel-air bomb. An article on Color Magazine described and had a photo of a device that looked like a big yellow garbage bin. Apparently it has high explosive as well as zirconium to provide incineration for a large radius. The US were able to destroy much of the opposition before the Iraqi could even target them. It was a bloodbath.

Postwar studies found that most of the wrecks on the Basra roadway had been abandoned by Iraqis before being strafed and that actual enemy casualties were low. After the war, correspondents did find some cars and trucks with burned bodies, but also many vehicles that had been abandoned. Their occupants had fled on foot, and the American planes often did not fire at them.

This photo was taken by Ken Jarecke with quote “If i don’t photograph this, people like my mom will think war is what they see on TV”. 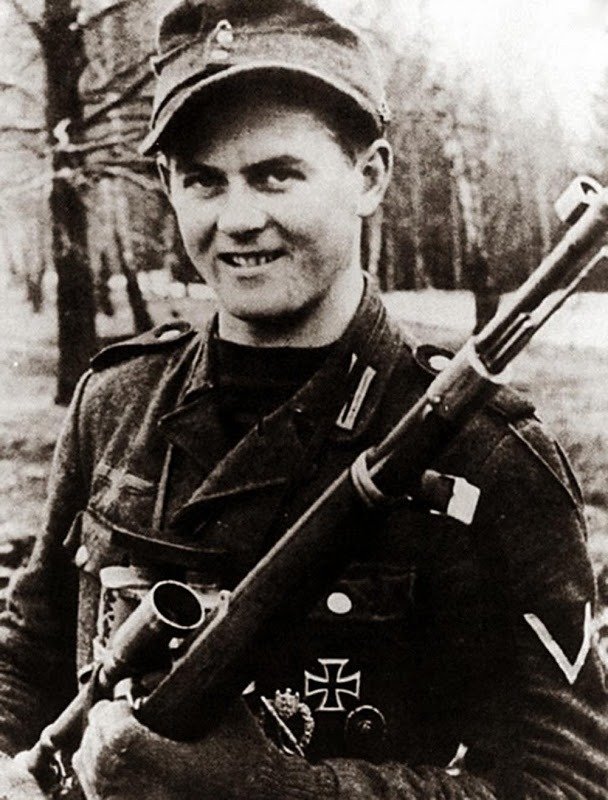 Matthäus Hetzenauer was an Austrian sniper in the 3rd Mountain Division on the Eastern Front of the World War II, who was credited with 345 kills. His longest confirmed kill was reported at 1100 meters (3,600 ft). Hetzenauer was also a recipient of the Knight’s Cross of the Iron Cross. The Knight’s Cross of the Iron Cross was awarded to recognize extreme battlefield bravery or successful military leadership.

He utilised both a Karabiner 98k sniper variant with 6x telescopic sight and a Gewehr 43 with ZF4 4x telescopic sight. He saw action against Soviet forces in the Carpathians, Hungary and Slovakia. On 6 November 1944 he suffered head trauma from artillery fire, and was awarded the Verwundeten-Abzeichen three days later. Gefreiter Hetzenauer received the Knight’s Cross of the Iron Cross on 17 April 1945. Generalleutnant and Divisions commander Paul Klatt had recommended Hetzenauer because of his numerous sniper kills, which totaled two enemy companies, without fear for his own safety under artillery fire and enemy attacks.