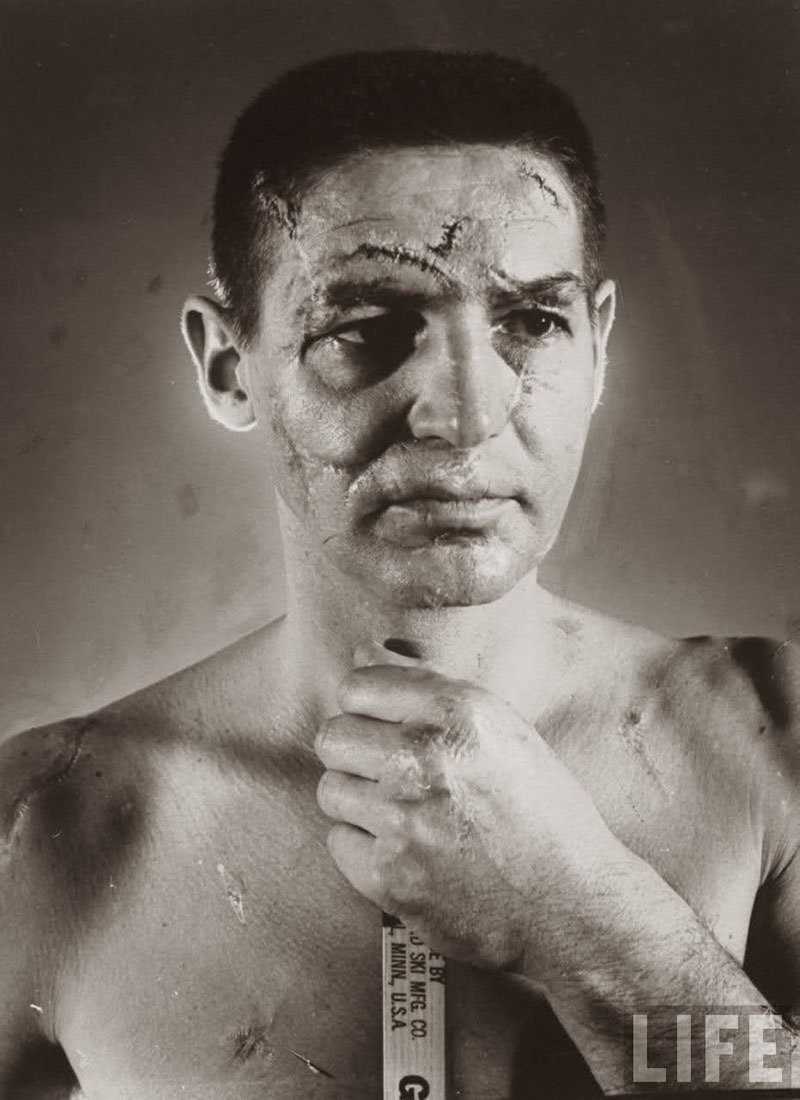 This face belongs to Terry Sawchuk, a 36-year-old goalie for the Toronto Maple Leafs. Re-created here, by a professional make-up artist and a doctor, are some of the more than 400 stitches he has earned during 16 years in the National Hockey League. Terry Sawchuck’s face was bashed over and over, but not all at one time. His wounds healed. The scars weren’t easily seen – except for a few of them. The re-creation of his injuries was done to help show the extent of his injuries over a span of years. 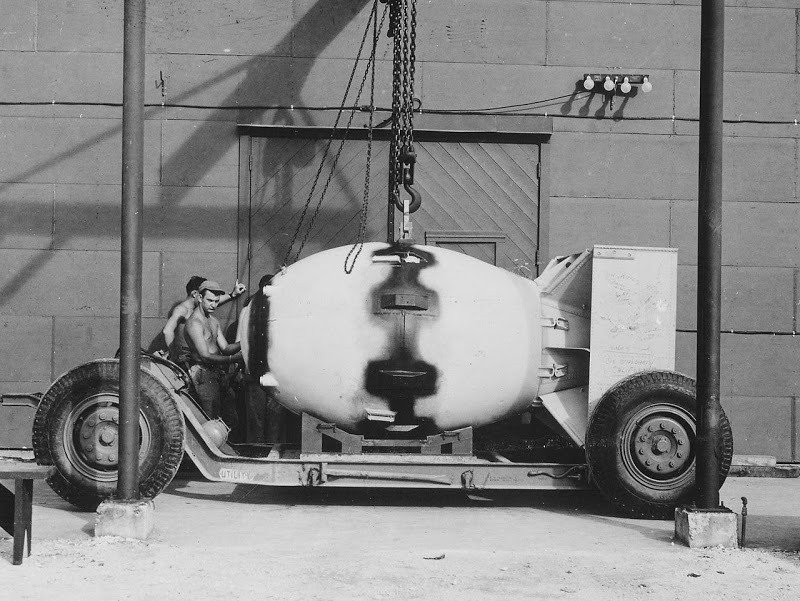 The Fat Man and Trinity were both implosion based plutonium devices, but they were very different weapons. Trinity’s “the gadget” was a massive unemployable bomb that would test the theories that Fat Man was based on. We didn’t know Fat Boy would detonate or not. The Fat Man was 21 Kilotons. 1 Kiloton = 1,000 tons of TNT. 1 Megaton = 1,000,000 tons of TNT. The total energy of all explosives used in World War Two (including the Hiroshima and Nagasaki bombs) is estimated to have been 3 megatons of TNT. The biggest one ever Tsar Bomba yielded over fifty megatons. Actually it was a 100 megaton design. The test version wasn’t full yield. 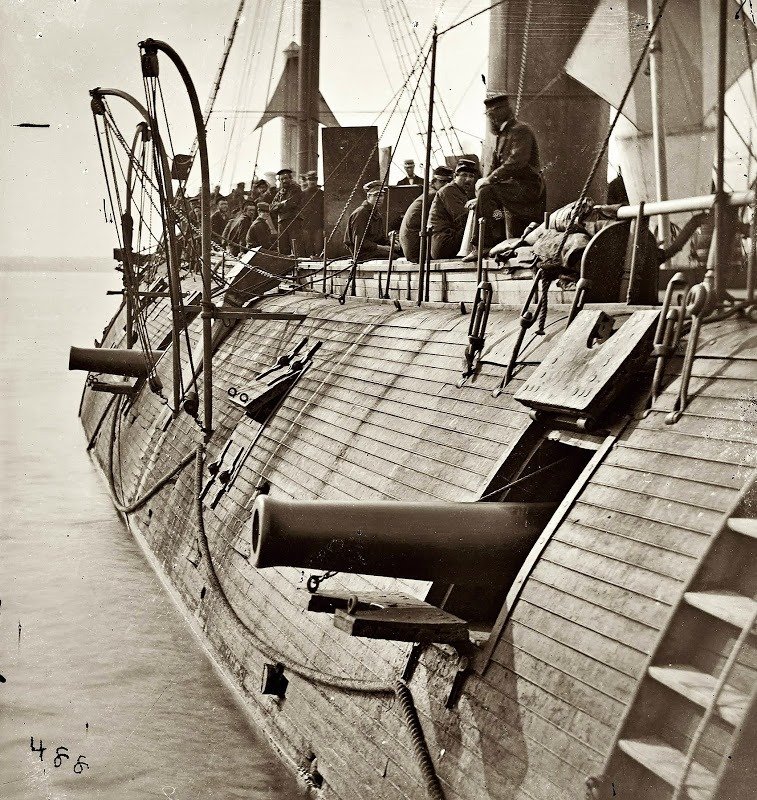 USS Galena was a wooden-hulled broadside ironclad built for the United States Navy during the American Civil War. The ship was initially assigned to the North Atlantic Blockading Squadron and supported Union forces during the Peninsula Campaign in 1862. She was damaged during the Battle of Drewry’s Bluff because her armor was too thin to prevent Confederate shots from penetrating. 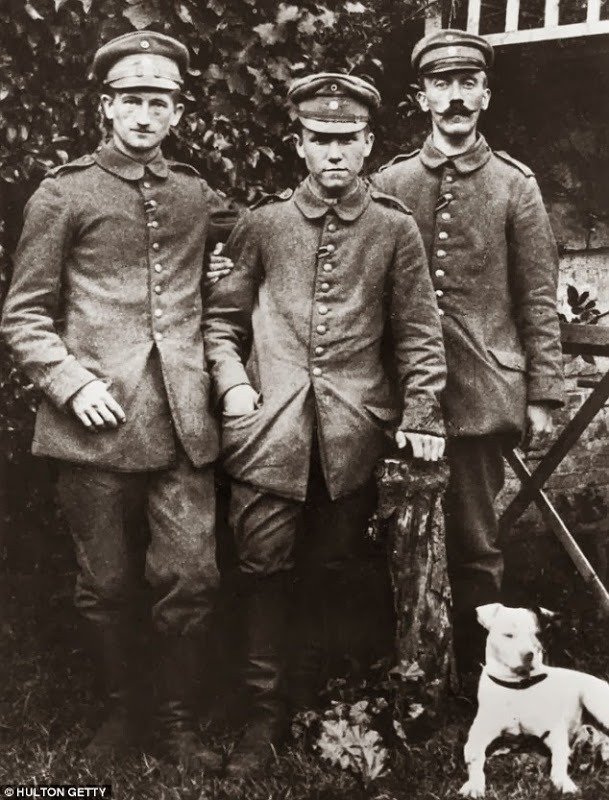 Portrait of Corporal Adolf Hitler during his stay in a military hospital, 1918.

In October 1918, he was temporarily blinded by a British chlorine gas attack near Ypres. He was sent to the military hospital, Pasewalk, Pomerania, where the news of the November 11, 1918, armistice reached him as he was convalescing. To his right you can see his his beloved “Doggie”, Fuchsl.

He only wore two medals, both earned. Most dictators of his time, as well as high ranking officers wore medals like it was fashion. Also notice in every war photo he’s always off to the side as if he was an outcast. Hitler never made it past corporal, which is unusual due to his service length, and noted in German archives as not “officers material”. (This concept is mentioned in Ernst Junger’s book Storm of Steel that really to be officer material in WW1 you’ve got to have been born into the right family). 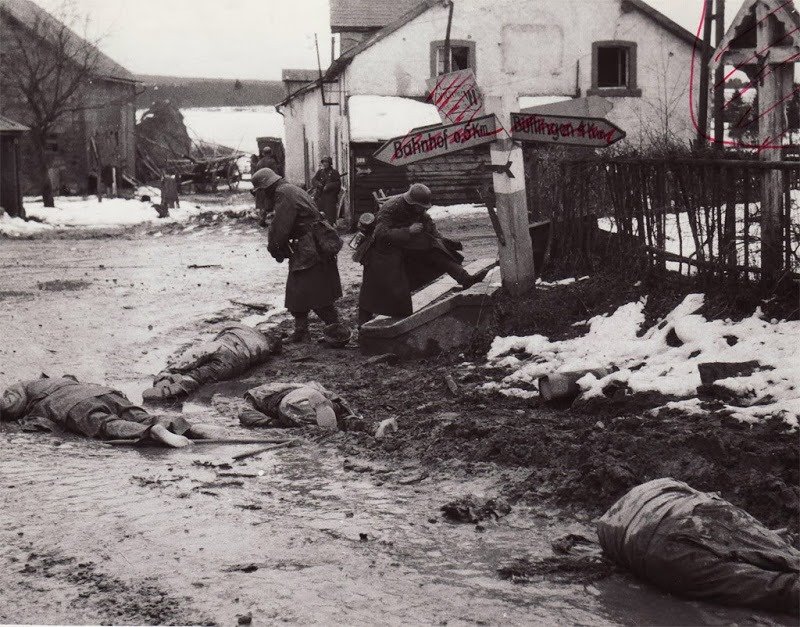 German soldiers take boots and other equipment from dead American soldiers at a crossroads in Belgium, 1944.

Photo taken during the early hours of the Battle of the Bulge, 1944. Pen marks indicate things Army censors redacted after the film was captured. For the Battle of the Bulge, the best units and equipment of the German military were concentrated for the push to the West. The battle was a last ditch attempt by Hitler to split the Allies in two in their drive towards Germany and destroy their ability to supply themselves. This was Germany’s last substantial mobile reserve, and it ended up detracting from Germany’s ability to defend against the Soviet winter offensives beginning in January 1945. 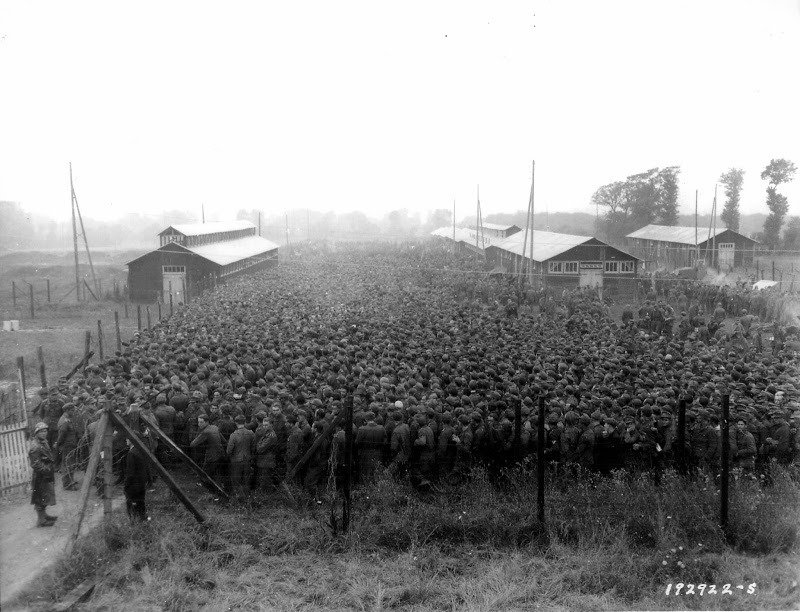 They were captured in the Falaise Pocket battle, almost 30,000 Germans captured. The guard soldiers would get in a jeep, circle around the camp, and every so often they’d yell “Halt!” and shoot their guns in the air to give the impression escaping soldiers were being shot. But the escapes were rare, none actually, because these prison camps were protecting the prisoners just as much as they were containing them. Anyone who escaped that camp would likely have been recaptured by Allied forces, or caught and executed by Resistance or Resistance-friendly citizens. Most if not all of those men knew their chances were much better inside those fences. 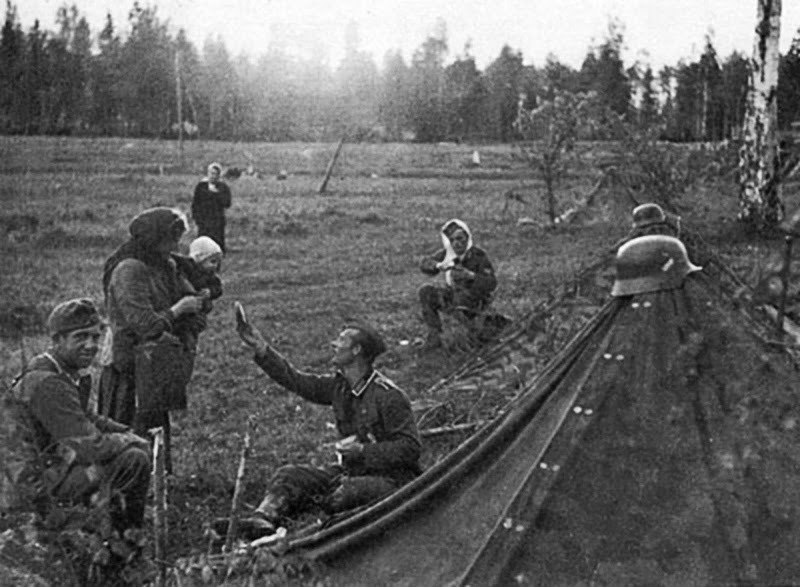 A German soldier shares his rations with a Russian mother, 1941.

Germany deliberately starved occupied Soviet territories by plundering their food for German use. This was the ‘Hunger Plan’, which starved to death millions of people. It was in part a practical decision to have German forces live off the land, but it also fit nicely into German plans to exterminate the population of the Soviet Union. And this makes this photo particularly poignant. This is a good man who has no idea that his role will ultimately make his gesture futile and starve them to death anyway. This photo was taken in 1941 by the photographer of the 291st Division of the Wehrmacht George Gundlach. One of the many, out of the photo album “Volkhov’s battle. Documents of horror 1941-1942″.

The Socialist Fraternal Kiss between Leonid Brezhnev and Erich Honecker, 1979.

The socialist fraternal kiss became famous via Erich Honecker and Leonid Brezhnev, who were photographed exercising the ritual. During the festivities of the 30th anniversary of the German Democratic Republic of East Germany in 1979, photographer Regis Bossu was able to take a photograph of the decisive moment wherein Leonid Brezhnev and President Erich Honecker were practicing a socialist fraternal kiss. After the photograph was taken, a lot of magazines used it immediately with one magazine captioning it as “The Kiss”.

“The Fraternal Kiss” is an example of how a single image can go beyond pure representation and elevate the documentary photography to another level. Depicting the emblematic act for the communists, Bossu’s photograph epitomizes the whole communist world. It symbolizes a mighty site of the Cold War: the Eastern Bloc, thus in a way the Cold War itself.

The socialist fraternal kiss consists of an embrace and a mutual kiss to cheeks or in rarer cases to the mouth. The origin of this ritual stems from the Eastern Orthodox Fraternal- or Easter Kiss, which through its entrenchment in the rites of the Orthodox Church carried a substantial strength of expression and so found use in daily life. Communist political leaders frequently kissed as a matter of formality in those days. So when East German President Erich Honecker went to embrace the Soviet leader, the kiss wasn’t exactly shocking—except for the enthusiasm both men showed for the lip lock. 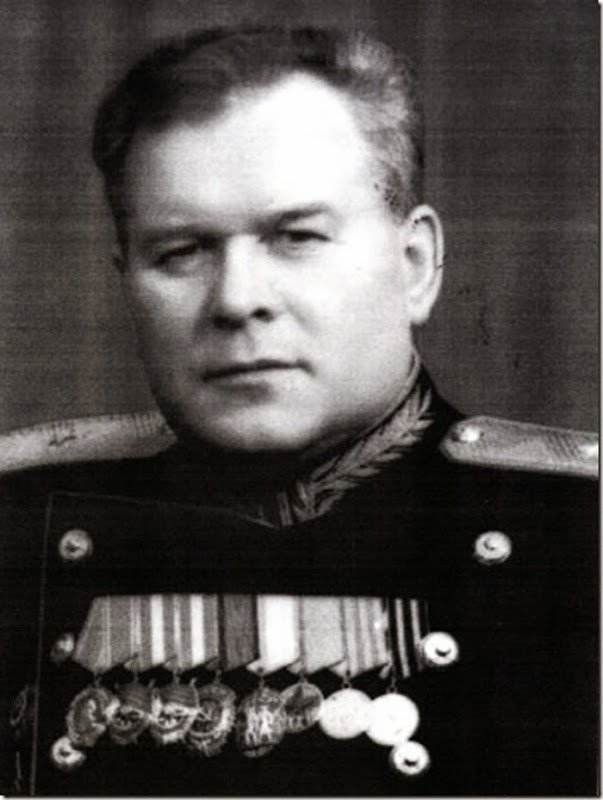 He is recorded as having executed tens of thousands of prisoners by his own hand, including his killing of about 7,000 Polish prisoners of war during the Katyn massacre in spring 1940, making him the most prolific official executioner in recorded world history. Vasili Mikhailovich Blokhin, the NKVD major in charge of executing the Polish officers from the Ostashkov camp, was a man who believed in personally doing the killing that his superiors had ordered him to supervise. 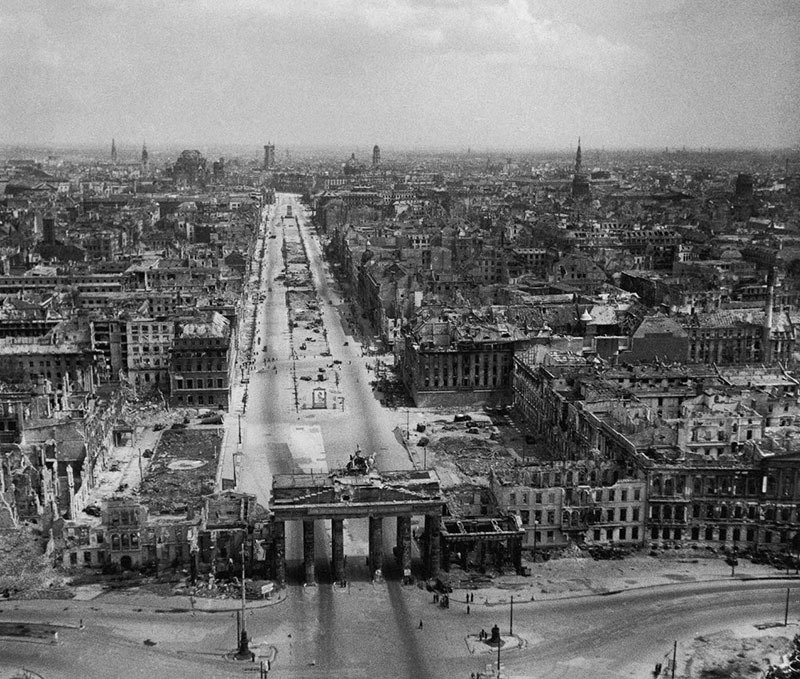 Berlin as the capital and cultural center of the German Reich was bombed very heavily. With over 45,000 tons of bombs in two weeks the city was almost completely destroyed. The irreplaceable architectural gems of the Schlüter, Knobelsdorf, Schadow and Schinkel were annihilated. Palaces, museums, churches, monuments and cultural sites fell victim to the bombs. Overall, Berlin was bombed 363 times by British, American and Russian aircraft. About 50,000 civilians were killed. They burned, suffocated, were buried under the ruins or lacerated by the bombs.