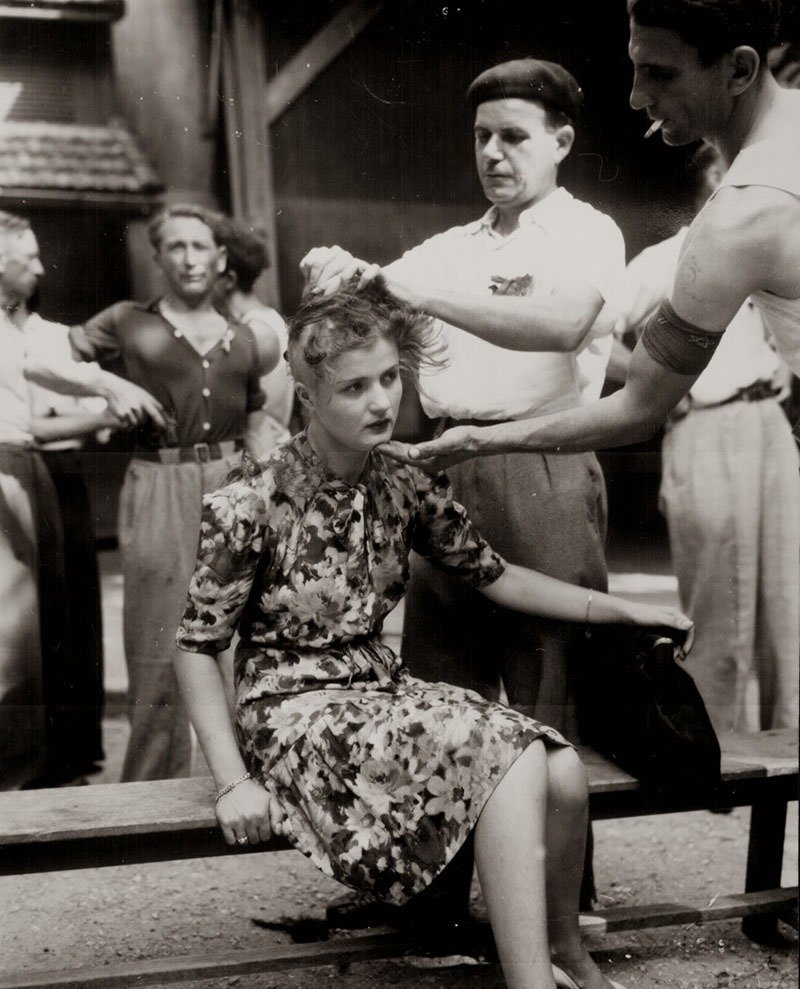 French female collaborator punished by having her head shaved to publicly mark her, 1944.

French women who befriended the Nazis, through coerced, forced, or voluntary relationships, were singled out for shameful retribution following the liberation of France. The woman photographed here, believed to have been a prostitute who serviced German occupiers, is having her head shaved by French civilians to publicly mark her. This picture was taken in Montelimar, France, August 29, 1944. 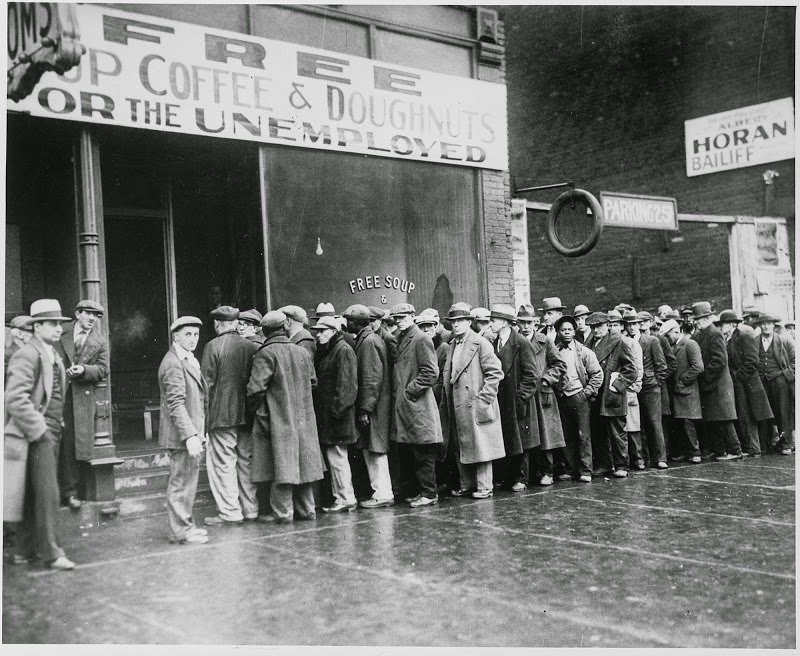 Al Capone started one of the first soup kitchens. The kitchen employed a few people, but fed many more. In fact, preceding the passage of the Social Security Act, “soup kitchens” like the one Al Capone founded, provided the only meals that some unemployed Americans had. Soup kitchens rose to prominence in the U.S. during the Great Depression, before WWII, in the early 20th century. One of the first and obvious benefits of a soup kitchen in the early 20th century was to provide a place where the homeless and poor could get free food and a brief rest from the struggles of surviving on the streets. 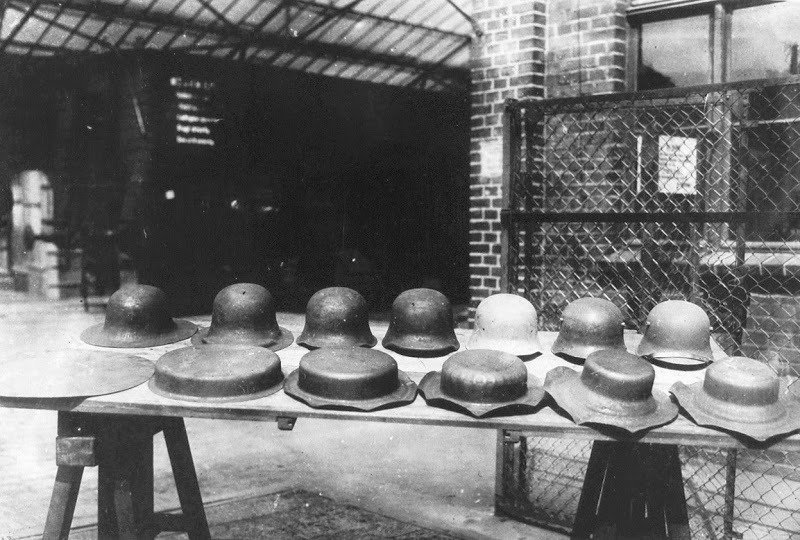 Stahlhelm, the stages of the helmet-making process of Stahlhelms for the Imperial German Army, 1916 . 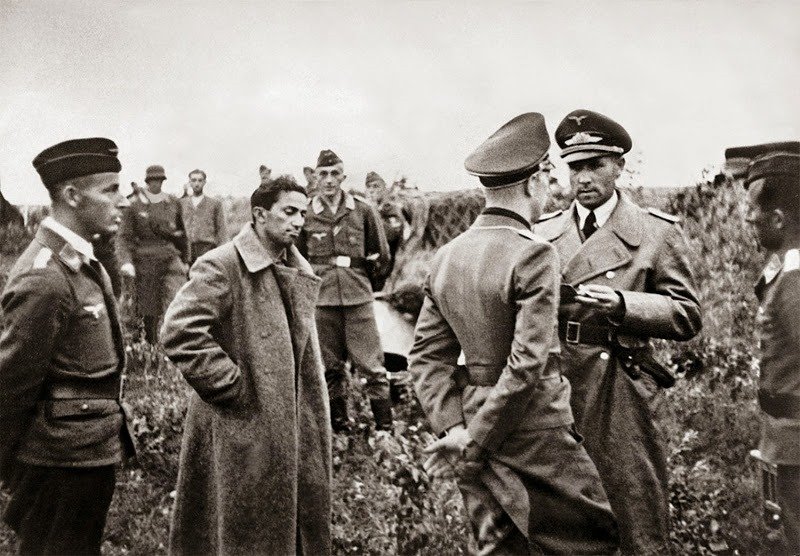 Yakov Dzhugashvili, Stalin’s elder son, served in the Red Army during the Second World War, and was captured, or surrendered, in the initial stages of the German invasion of the USSR. There are still many contradictory legends in circulation about the death of Yakov Dzhugashvili, as there are about all the important events in his life. 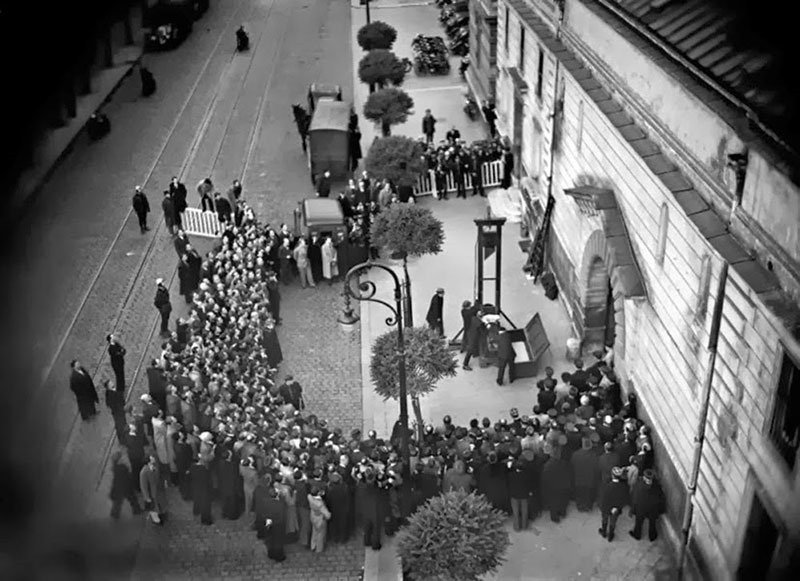 The last public execution by guillotine, 1939.

16. Marine and the Kitten 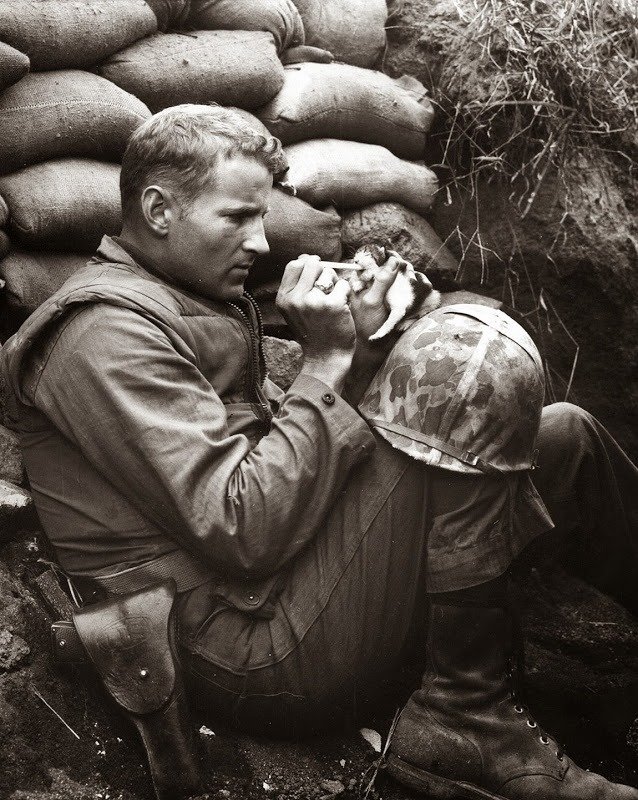 In the middle of the Korean War, this kitten found herself an orphan. Luckily, she found her way into the hands of Marine Sergeant Frank Praytor. He adopted the two-week-old kitten and gave her the name “Miss Hap” because, he explained, “she was born at the wrong place at the wrong time.” There’s a juxtaposition between the soldier and the human. 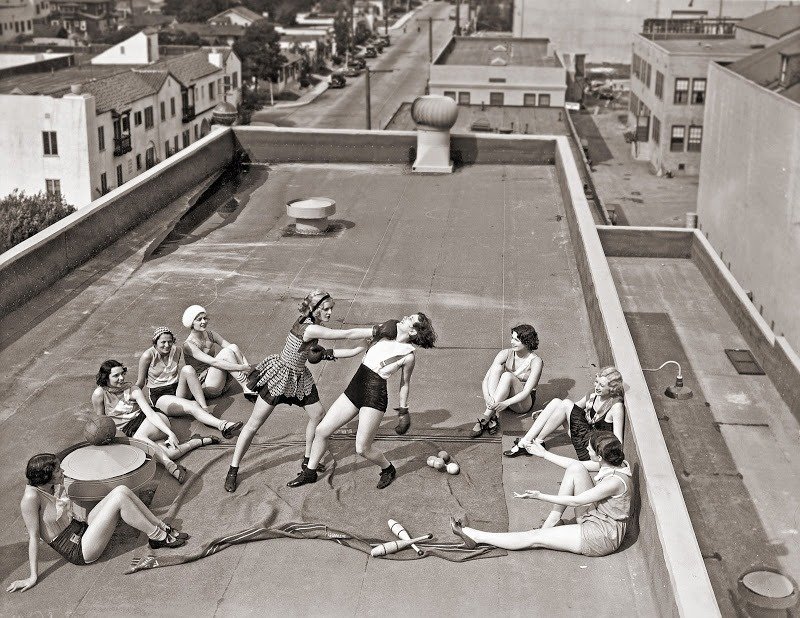 They are all wearing dance shoes so they are probably performers for a variety show. Since no one had decent air conditioning back then, practicing their acts outside on the roof was better than in a stuffy theater. Someone must have thought it’d make a good candid photo. The blonde girl is probably hitting her, but more of a stunt punch than a real one. Even if it is staged, it’s still historical. The original caption reads: Radio Pictures Chorus Girls. The theme of this picture is young, attractive women, dancers, exercising in the manner associated with men, which would have been an unusual thing for a woman to do in that time (especially the boxing obviously). 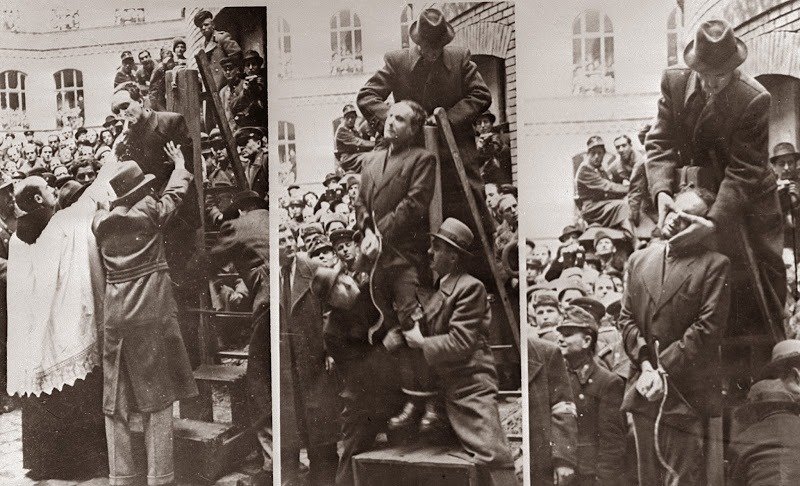 Hungarian Prime Minister Ferenc Szalasi is given the last rites before being hanged as a collaborator, 1946.

Ferenc Szálasi was the leader and all-powerful head of the fascist Arrow Cross movement, the regime that came to power in Hungary with the armed assistance of the Germans on October 15-16, 1944. After that date, the fate of hundreds of thousands of Jews was in his hands. Szálasi’s hatred of the Jews was a pillar of his Weltanschauung. He seriously believed in the theory of a worldwide Jewish conspiracy. In June 1943, he declared that the Jews, de facto and de jure, ruled the word: “Plutocracy, freemasonry, the liberal democracy, parliamentarism, and the Marxism are all but instruments in the hands of Jews so that they can hang onto their power and control over the world.” Firmly believing himself to be a good Christian and a Catholic, Szálasi argued that anti-Semitism was taught in the Bible itself. Unlike Hitler or Alfred Reosenberg, Szalasi was merely an anti-Semite. He knew in inferior and superior races; he merely hated the Jews. 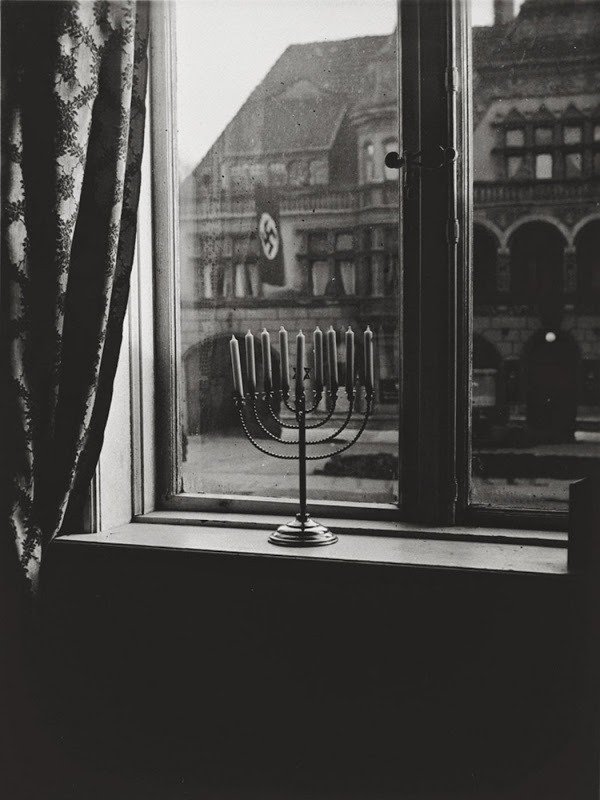 It was the eighth night of Chanukah in Kiel, Germany, a small town with a Jewish population of 500. That year, 1931, the last night Chanukah fell on Friday evening, and Rabbi Akiva Boruch Posner, spiritual leader of the town was hurrying to light the Menorah before the Shabbat set in.

Directly across the Posner’s home stood the Nazi headquarters in Kiel, displaying the dreaded Nazi Party flag in the cold December night. With the eight lights of the Menorah glowing brightly in her window, Rabbi Posner’s wife, Rachel, snapped a photo of the Menorah and captured the Nazi building and flag in the background. She wrote a few lines in German on the back of the photo. “Chanukah, 5692. ‘Judea dies’, thus says the banner. ‘Judea will live forever’, thus respond the lights.”

20. Refusing to do Nazi Salute 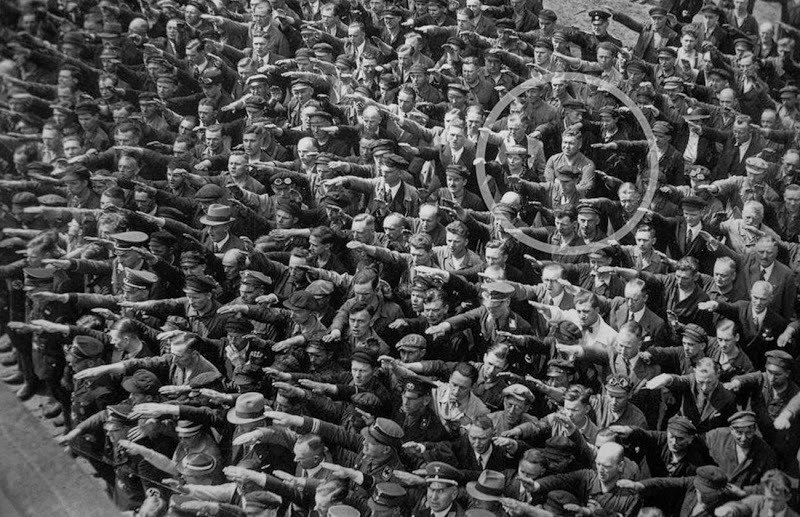 The photo was taken at the launch of a German army vessel in 1936, during a ceremony that was attended by Adolf Hitler himself. Within the picture a lone man stood with arms crossed as hundreds of men and women around him held up their arms in salute and allegiance to the Nazi Party and its leader, Adolph Hitler. Everyone in attendance is showing their undying support for Der Fuhrer by throwing out their very best “Sieg Heil.” August Landmesser, grimacing with arms crossed, stood strong and defiant as he showed his disapproval by not displaying support for the Nazi Party. What made this photo and Landmesser’s defiance unique is that it represented the protest of one man, in its most sincere and pure form.