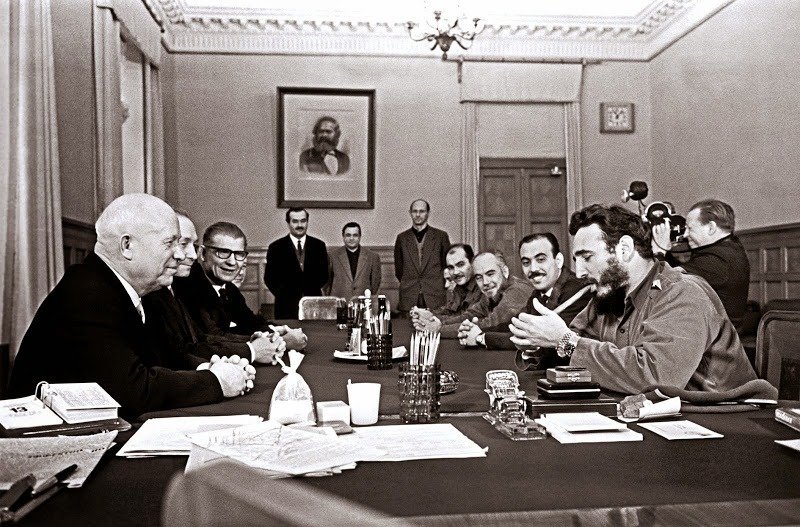 Here Fidel Castro is seen smoking a Cuban cigar and wearing two Rolex watches in the Kremlin while he chats with Khrushchev, in front of a Karl Marx picture, 1963. The non-verbal body language in this photo is absolutely fascinating. Notice everybody in the room is staring at Castro’s cigar, and that everybody sitting is smiling with their hands folded in front of them on the table, and the three guys standing below the portrait of Marx, have their arms behind their backs. At that time this sort of pictures were censored, but after the fall of the Soviet Union, many photos and other documents stored away were released, including this one too.

Fidel Castro was often spotted wearing two Rolex’s at the same time – one of them a GMT, the other a Submariner. In total the watches gave Castro a three time zone overview by a glance on his wrist. The watches have been set for Havana, Washington and Moscow time. Today Washington D.C. and Havana are in the same time zone (UTC -5), but between the years 1960 and 1964 Havana used the time zone UTC -4. Rolex watches weren’t a status symbol when this picture was taken. They were considered some of the most functional accurate watches of their time (before quartz era started). 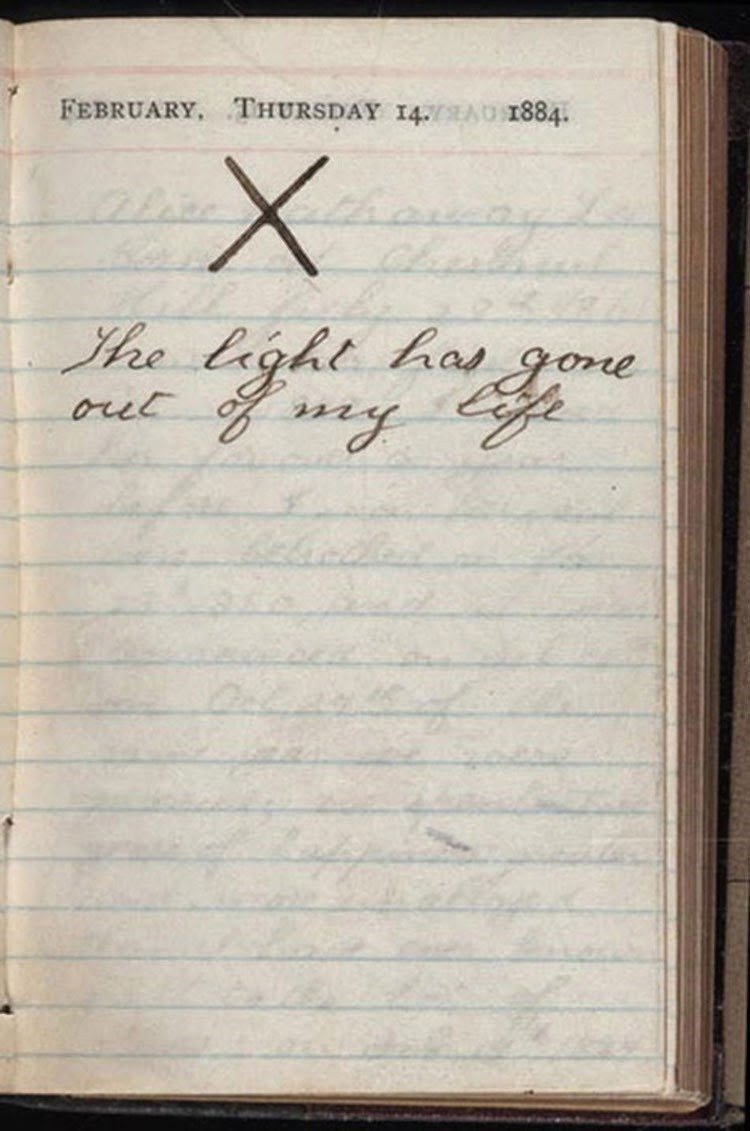 Theodore Roosevelt’s diary the day his wife and mother died, 1884.

On February 14, 1884, Theodore Roosevelt received a terrible news, his wife and mother died within hours of one another in the Roosevelt house in New York City. His mother, age 50, succumbed to typhus, and his wife Alice died at the age of 22 giving birth to her namesake. The following diary entries lovingly describe his courtship, wedding, happiness in marriage, and his grief over the death of his wife Alice. In his ever-present pocket diary on February 14, 1884, Theodore Roosevelt simply wrote an “X” above one striking sentence: “The light has gone out of my life“. 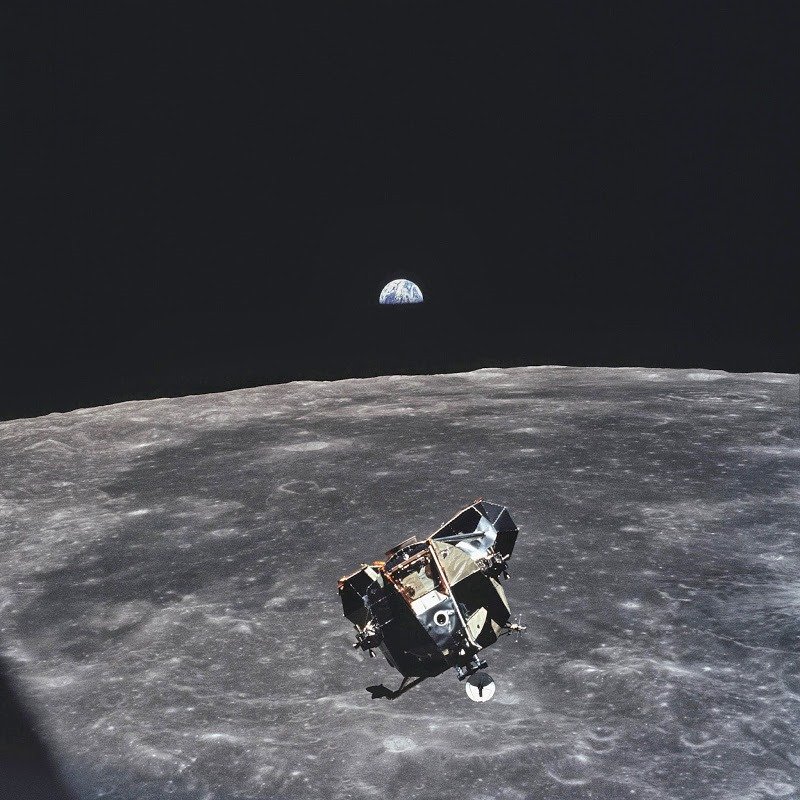 Michael Collins, the astronaut who took this photo, is the only human, alive or dead that isn’t in the frame of this picture, 1969.

Collins took this picture of the Lunar Module, containing Buzz Aldrin and Neil Armstrong with Earth in the background, during the Apollo 11 mission. Matter cannot be created or destroyed. That means that every human that lived up to the point of this photo being taken still exists, at least in some form, and every human that has been born since then was also is in this photo, at least in some form. So even if you were born after this picture was taken, the materials you’re made from are still on the frame of this picture. 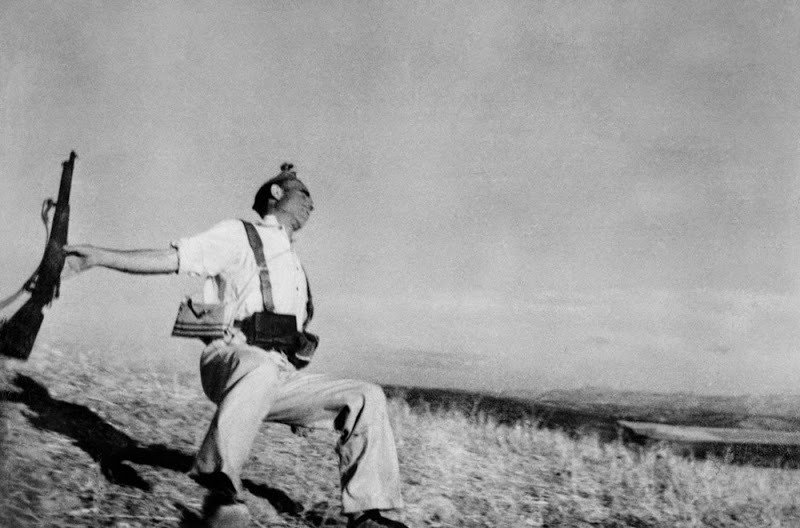 The Falling Soldier became famous for the way it seems to capture, with terrifying immediacy, the moment when a bullet fatally strikes a Spanish Loyalist militiaman; later, it became famous for allegations that the photograph was “faked,” or at least (though this was common practice at the time) staged. The photo was taken by Jewish Hungarian photographer Robert Capa. From 1936 to 1939, Capa worked in Spain, photographing the Spanish Civil War. The Falling Soldier was thought to capture the moment of a soldier’s death in battle. He is collapsing backwards, having been fatally shot in the head. He is dressed in civilian-looking clothing but wearing a leather cartridge belt, and his rifle is slipping out of his right hand.

It was understood to have been taken on September 5, 1936, and was long thought to depict the death of a Republican during the Spanish Civil War. He was later identified as the anarchist militiaman Federico Borrell García (this is still disputed though). The original title of the photograph is“Loyalist militiaman at the moment of Death, Cerro Muriano, September 5, 1936”. The story behind this photo is too much complicated and disputed. Some historians say it’s genuine, some others say it’s staged. Sometimes the truth is stranger than fiction. However, one thing is true, the photo was not taken on Cerro Muriano, but at the village of Espejo. 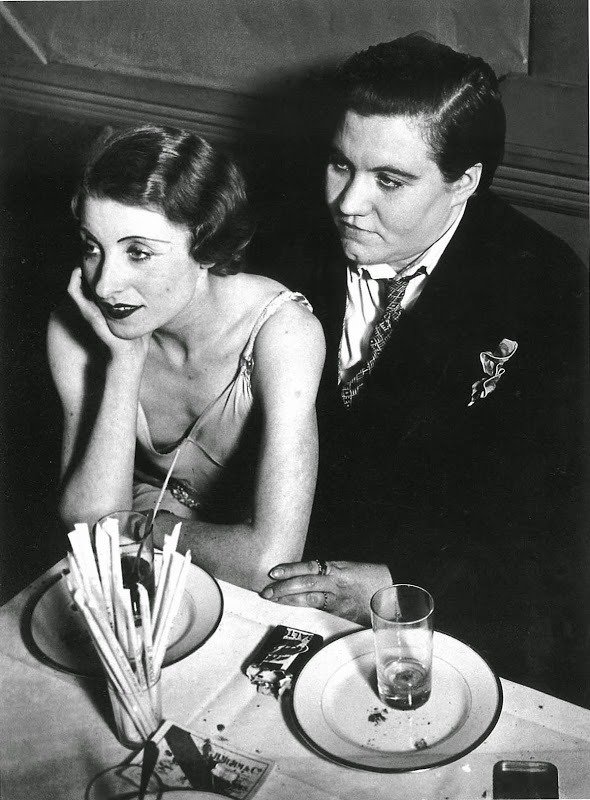 During the 1920’s Paris had gained a reputation for the variety of its nighttime pleasures and for its free and easy attitude toward life in general. Within this climate of relative tolerance many gay and lesbian nightclubs opened and flourished. Among these was Le Monocle, which is credited with being one of the first, and certainly the most famous of lesbian nightclubs. It was opened by Lulu de Montparnasse in the Montmartre area, which at that time was the main gathering place for Parisian lesbians. As historian Florence Tamagne explains, lesbians during that time were often found sitting together at Montmartre’s “outdoor cafes or dancing at the Moulin Rouge.” As for Le Monocle, “All the women there dressed as men, in Tuxedos, and wore their hair in a bob.” 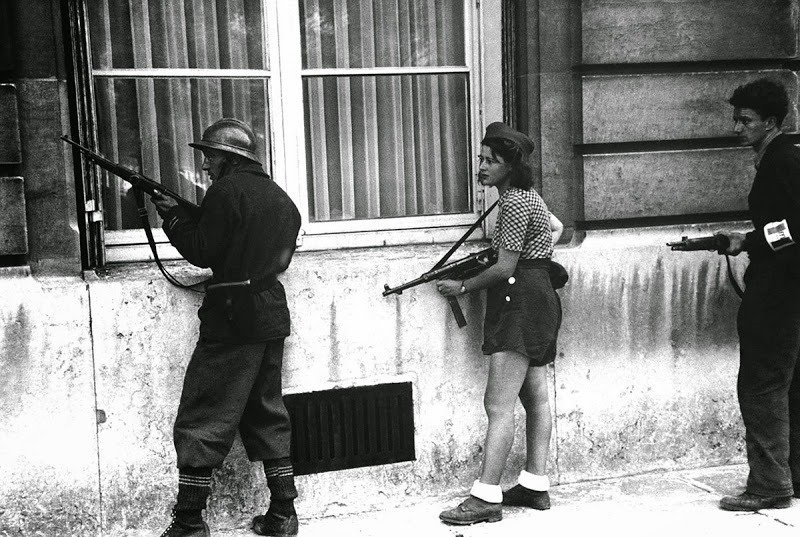 Members of the French Resistance are photographed in the midst of battle against German troops. We see a man in makeshift army fatigues to the left and a young man on the right. Then, most strikingly, we see a woman in shorts, a patterned top, and a military hat in the center. The photograph of this young female fighter would become a symbol of women’s involvement in the Resistance.

Simone Segouin, also known by her nom de guerre Nicole Minet. When this photo was taken she was 18 years old. The girl had killed two Germans in the Paris fighting two days previously and also had assisted in capturing 25 German POWs during the fall of Chartres. She was member the Francs-Tireurs et Partisans group (French for “free shooters”), the group named themselves after the French irregular light infantry and saboteurs who fought the Germans during the Franco-Prussian War. 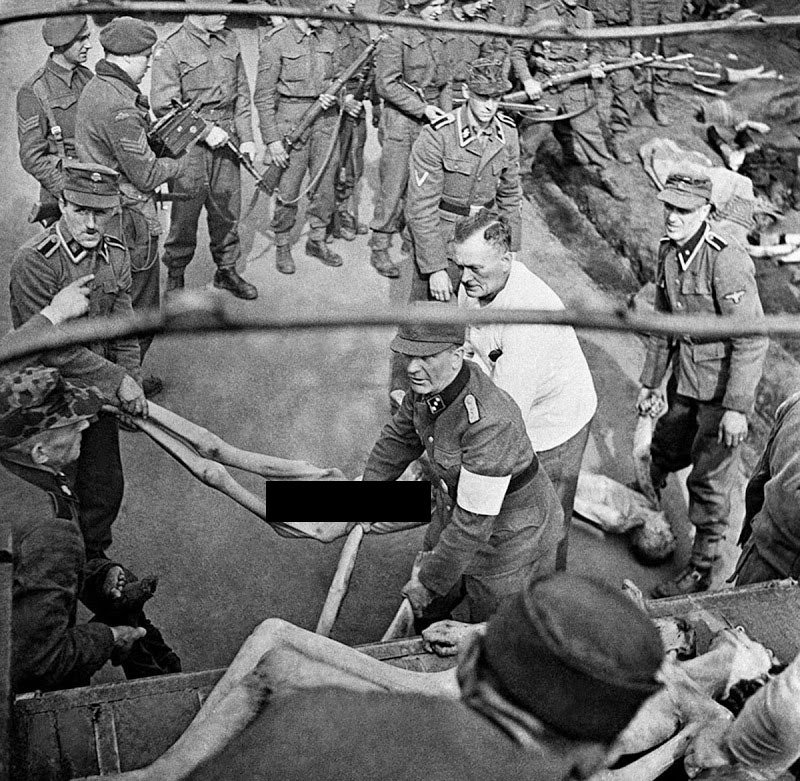 After the liberation of the camp the dead bodies were buried in mass graves. The SS prison guards were forced by British soldiers to load the bodies into the trucks. Note British troops in background with Sten submachine gun and Lee-Enfield rifles. 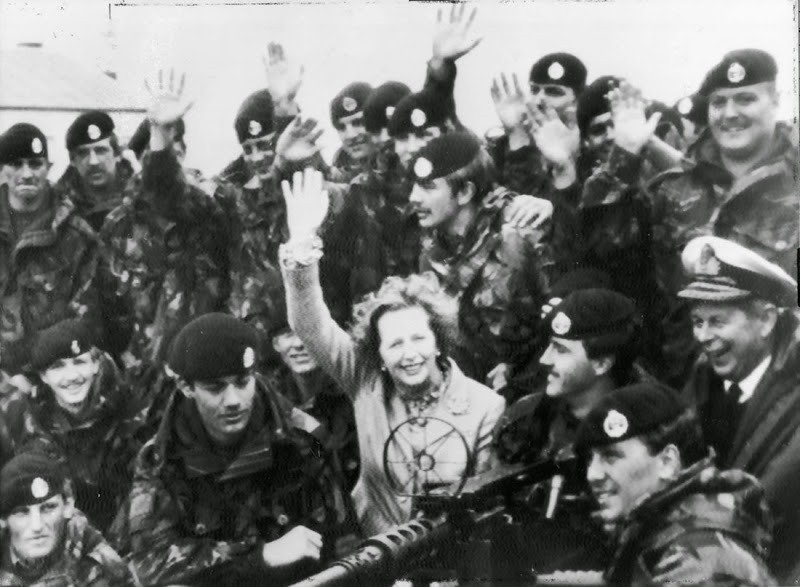 Thatcher is surrounded by troops on a visit to Goose Green in January 1983, where the Parachute Regiment had secured a crucial victory seven months earlier. The war was a turning point in her premiership. The Argentinian writer Jorge Luis Borges called the Falkland War: “The Falklands thing was a fight between two bald men over a comb”. Thus, describing how useless the islands were to both nations, as bald men do not have hair and have no use of a comb.

The Falklands War was a ten-week war between Argentina and the United Kingdom over two British overseas territories in the South Atlantic. The conflict lasted 74 days and ended with the Argentine surrender on 14 June 1982, returning the islands to British control. 649 Argentine military personnel, 255 British military personnel and three Falkland Islanders died during the hostilities.

The islands have little ostensible economic or strategic value — though it does have valuable fisheries, and there are suggestions that there may also be oil and gas reserves (which could well reignite/escalate the sovereignty dispute.) What they do have, however, is a couple of thousand citizens who identify very strongly as British, and who hold British citizenship. The public opinion in Britain dictates that they should be protected by the British government — that explains in large part why the Thatcher government went to war. 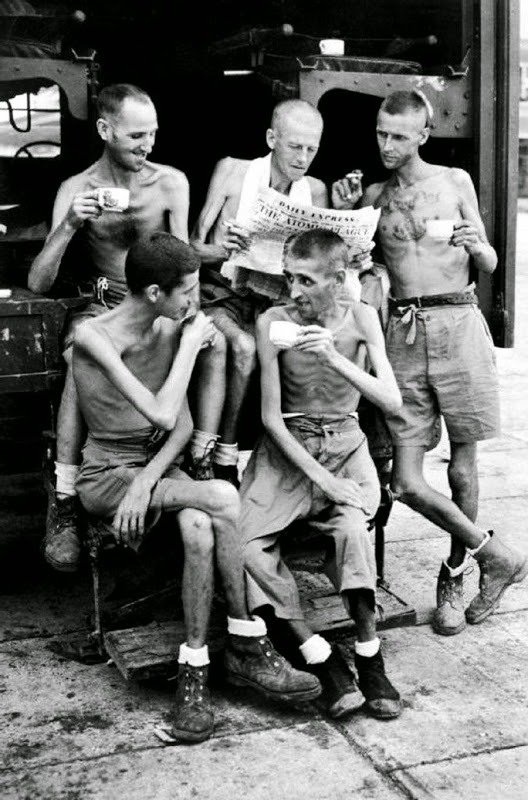 Australian soldiers after their release from Japanese captivity in Singapore, 1945.

Former prisoners of war catch up on news from home after their release from Japanese captivity. The brutal treatment inflicted upon these men by their Japanese captors is clearly illustrated by their poor physical condition.

These prisoners were held on the Changi POW camp. Often thought to be synonymous with horror it was in fact a relatively comfortable camp, at least compared to those on Borneo, Ambon, Hainan, Japan and the Thai–Burma railway. The Japanese used the POW’s at Changi for forced labor. Men were made to work in the docks where they loaded munitions onto ships. They were also used to clear sewers damaged in the attack on Singapore. As the end of the Pacific War approached, rations to the POW’s were reduced drastically. To be more precisely ration scales were reduced even for the Japanese as resupply from outside Malaya/Singapore became more difficult as the war progressed. It must be noted that at the same time Japanese front line troops were dying of starvation in New Guinea (and turning cannibal if eye witness accounts are to be believed). 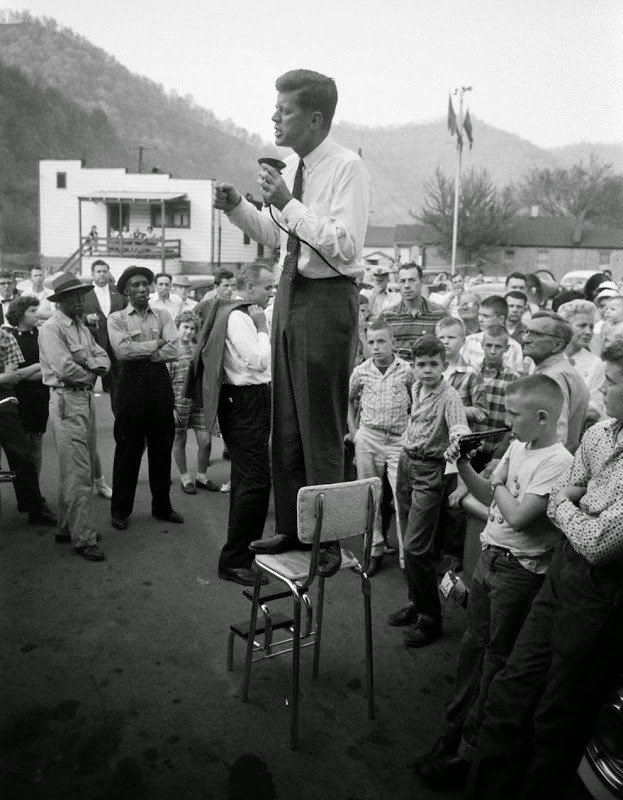 While part of every candidate’s retinue, security was simply not the pressing public concern in 1960 that it would suddenly and necessarily become within a few short years. Here, seemingly alone in a crowd in Logan County, West Virginia, JFK speechifies from a kitchen chair as, mere feet away, a young boy absently plays with a jarringly realistic-looking toy gun. JFK went on to win the West Virginia primary, with 61 percent of the vote.