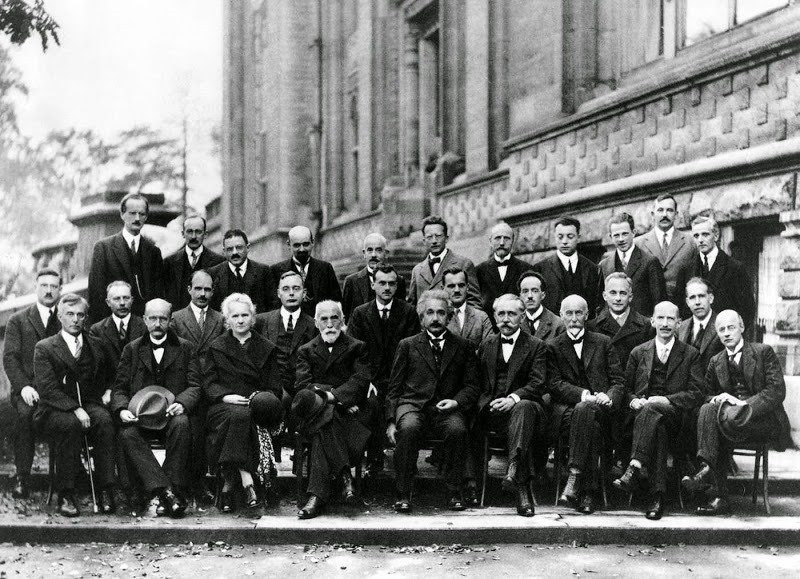 The Solvay Conference, probably the most intelligent picture ever taken, 1927.

The Solvay Conference, founded by the Belgian industrialist Ernest Solvay in 1912, was considered a turning point in the world of physics. Located in Brussels, the conferences were devoted to outstanding preeminent open problems in both physics and chemistry. The most famous conference was the October 1927 Fifth Solvay International Conference on Electrons and Photons, where the world’s most notable physicists met to discuss the newly formulated quantum theory. The leading figures were Albert Einstein and Niels Bohr.

Einstein, disenchanted with Heisenberg’s uncertainty principle, remarked “God does not play dice”. Bohr replied, “Einstein, stop telling God what to do”. 17 of the 29 attendees were or became Nobel Prize winners, including Marie Curie, who alone among them, had won Nobel Prizes in two separate scientific disciplines. Here’s a splendid colored version of the photo. 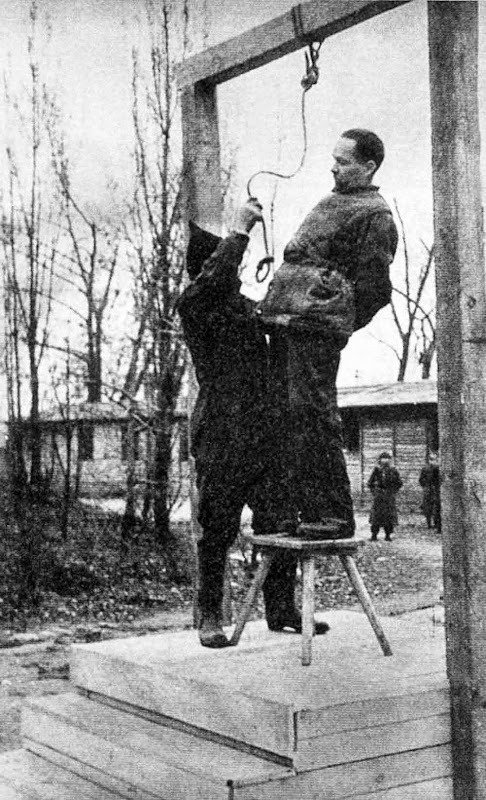 Rudolf Hoess the commandant of the Auschwitz concentration camp, is hanged next to the crematorium at the camp, 1947.

Rudolf Hoess (Rudolf Höss) was the architect and commandant of the largest killing center ever created, the death camp Auschwitz, whose name has come to symbolize humanity’s ultimate descent into evil.

On 1 May 1940, Hoess was appointed commandant of a prison camp in western Poland. The camp was built around an old Austro-Hungarian (and later Polish) army barracks near the town of Oswiecim; its German name was Auschwitz. Hoess commanded the camp for three and a half years, during which he expanded the original facility into a sprawling complex known as Auschwitz-Birkenau concentration camp.

After visiting Treblinka extermination camp to study its methods of human extermination, Hoess, beginning on 3 September 1941, tested and perfected the techniques of mass killing that made Auschwitz the most efficiently murderous instrument of the Final Solution. He improved on the methods at Treblinka by building his gas chambers ten times larger, so that they could kill 2,000 people at once rather than 200. He commented: “still another improvement we made over Treblinka was that at Treblinka the victims almost always knew that they were to be exterminated and at Auschwitz we endeavored to fool the victims into thinking that they were to go through a delousing process”.

Hoess experimented with various methods of gassing. According to Eichmann’s trial testimony in 1961, Hoess told him that he used cotton filters soaked in sulfuric acid in early killings. Hoess later introduced hydrogen cyanide (prussic acid), produced from the pesticide Zyklon B. With Zyklon B, he said that it took 3–15 minutes for the victims to die and that “we knew when the people were dead because they stopped screaming”.

In the last days of the war, Hoess was advised by Himmler to disguise himself among German Navy personnel. He evaded arrest for nearly a year. When he was captured by British troops on 11 March 1946, he was disguised as a farmer and called himself Franz Lang. His wife had told the British where he could be found, fearing that her son, Klaus, would be shipped off to the Soviet Union, where she feared he would be imprisoned or be tortured. After being questioned and beaten (Hoess’s captors were well aware of his crimes), Hoess confessed his real identity. 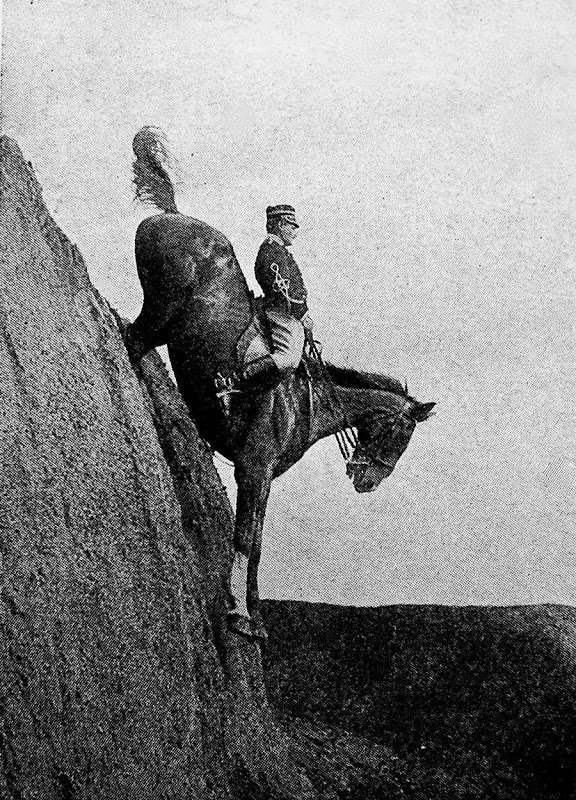 This photo was taken in 1906. In the first decades of the 20th century the Italian Cavalry School at Tor di Quinto near Rome was – along with the French Cavalry School at Saumur – the leading institution for horsemanship in the world. Tor di Quinto was probably the foremost academy for advanced cross country riding. The Italian Cavalry School was absolutely cutting edge, their style revolutionized military cavalry riding around the world. Before them, the dominant cavalry style was to ride erect, in a martial and rigid posture that negated all fluidity to the horse. Italian Cavalry School completely shaped their style around the horse, their leading officer studied how horses jumped without a rider and adapted to it, rather than the opposite. 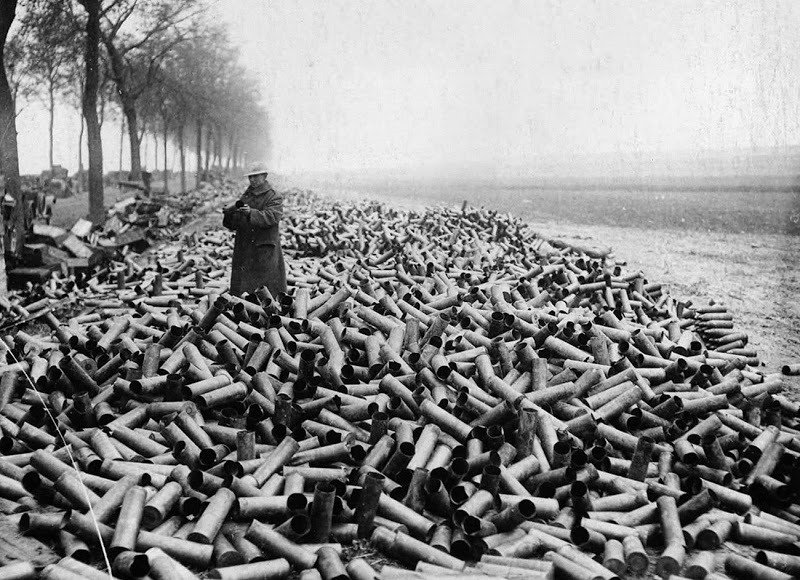 The shells from an allied creeping bombardment on German lines, 1916.

Lone soldier surrounded by a mountain of empty shell cases, France. This lone British soldier up to his knees in spent shell cases, offers a striking impression of the destruction that took place on the Western Front. However, this picture only tells half the story, with the other part of the story being the damage that the shells from these cases inflicted upon the enemy. This photograph was taken by Tom Aitken, and may well have been used for propaganda purposes.

The original caption reads: “Official photograph taken on the British Western Front in France. Some shell cases on the roadside in the front area, the contents of which have been dispatched over into the German lines”.

Probably the craziest aspect of World War One was so the called “creeping bombardment“. For those unfamiliar with the term, a creeping barrage is where artillery rounds are fired just in front of an advancing line of infantry, to clear barbed wire and other defenses. A creeping barrage was designed so as to place a curtain of artillery fire just ahead of advancing infantry, a barrage which would constantly shift – or creep – forward directly ahead of attacking troops. Such a method of artillery fire necessarily required very careful planning by both artillery and infantry commanders, particularly with regard to timing if an army’s own troops were not to be caught (or held back) by their own artillery barrage. As a rough rule of thumb a creeping barrage would progress at the rate of approximately 50 meters per minute once an attack began.

15. Mother and Her Daughter 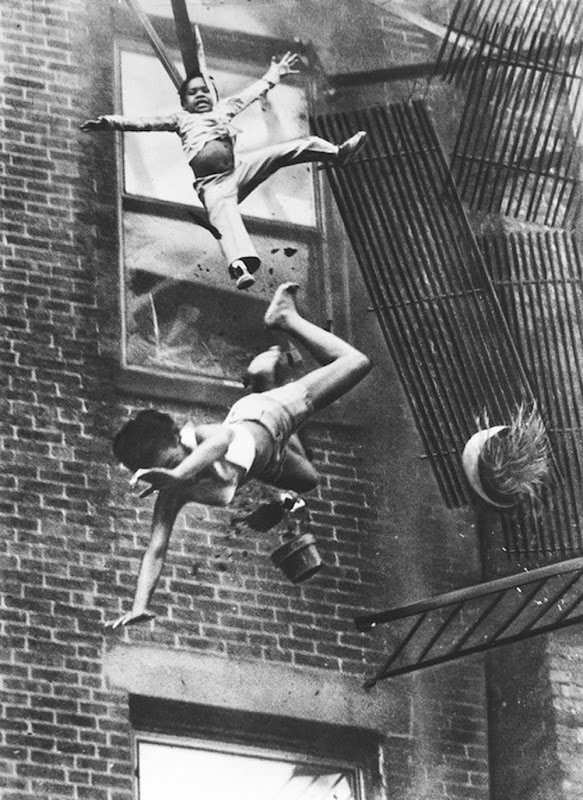 A mother and her daughter falling from a fire escape, 1975.

On July 22, 1975 in Boston, a 19-year-old and her 2-year-old goddaughter were trapped in a burning building. A firefighter shielded them from the flames as a fire ladder inched closer. Then the fire escape collapsed. The woman died from her injuries, but her two-year-old goddaughter survived because she landed on the woman’s body. It’s tragic, going from the hope of immediate rescue to a deadly fall in seconds. 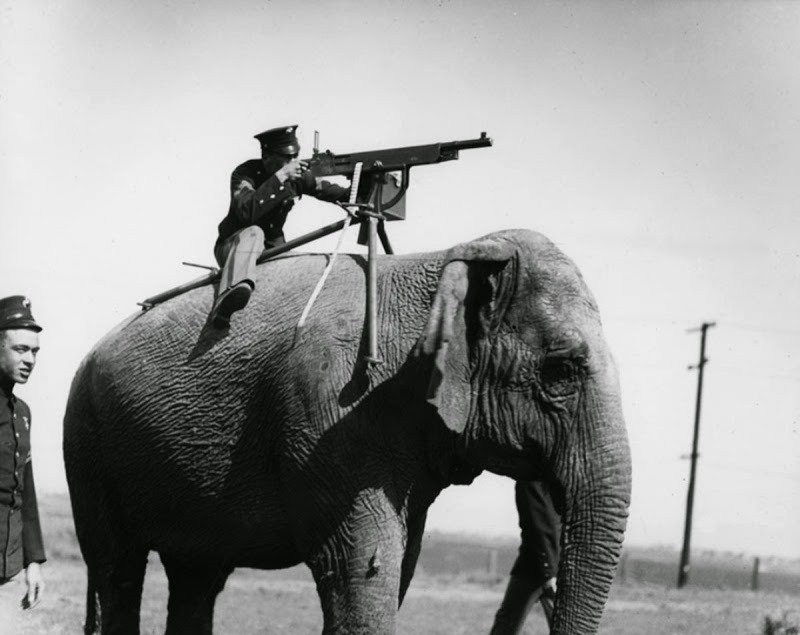 An American corporal aims a Colt M1895 atop a Sri Lankan elephant. The reason why the corporal is atop the elephant is a mystery but elephants were never a weapons platform adopted by the US Army. It’s probably a publicity picture, not something the army would actually try to employ. The elephant would not respond well to the sound of that machine gun a few inches from his ears. 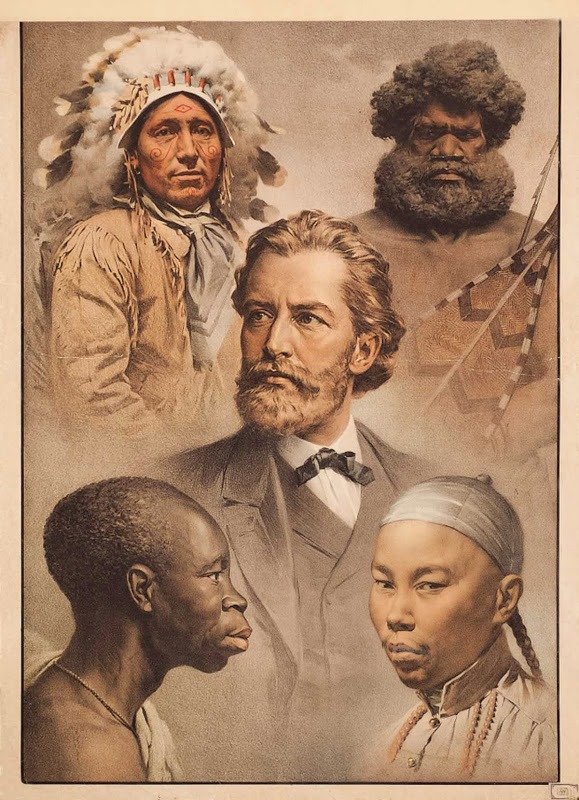 The picture/poster shows five men representing five different cultural spheres: an American Indian, an Australian Aborigine, an African, an Asian and an European. The European, standing in the center, dominates the scene and thus shows the Eurocentric world view of the time (early 20th century). This poster was printed as an illustration on a Dresden-based German magazine in 1911. 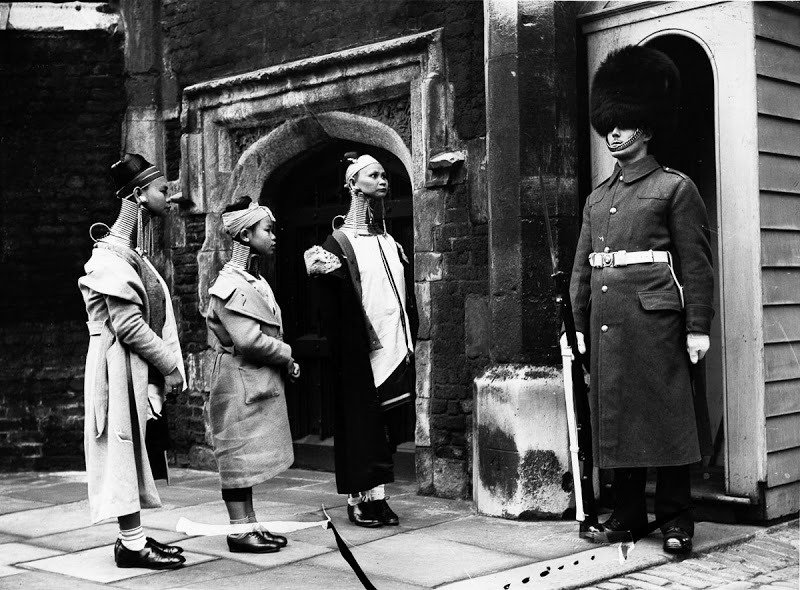 The Kayan Lahwi people, also known as Padaung, are an ethnic group with populations in Myanmar (Burma) and Thailand. Padaung women are well-known for wearing neck rings, brass coils that are placed around the neck, appearing to lengthen it. The women wearing these coils are known as “giraffe women.” This set of photographs is taken in 1935 when a group of Padaung women visited London. In the 1930s, circuses and shows were extremely popular in the United Kingdom and these women, advertised as “giraffe women,” were star attractions, drawing huge crowds. 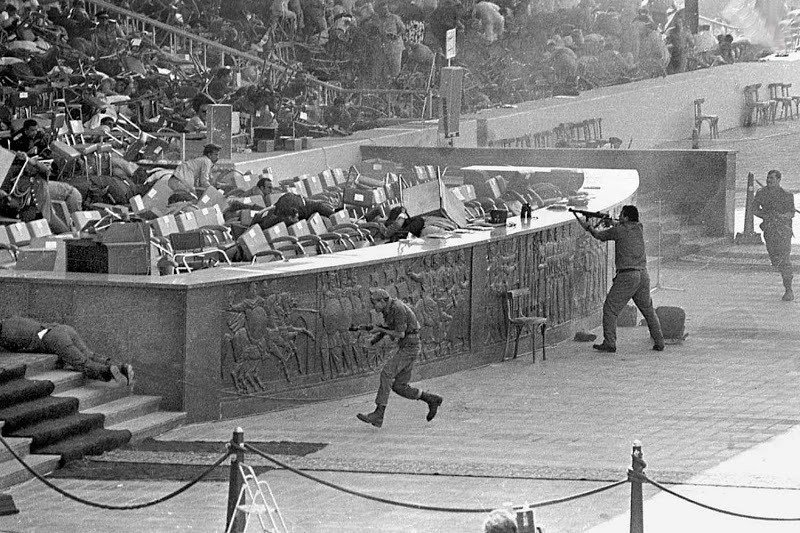 The assassination of Anwar Sadat, 1981.

The assassins’ bullets ended the life of a man who earned a reputation for making bold decisions in foreign affairs, a reputation based in large part on his decision in 1977 to journey to the camp of Egypt’s foe, Israel, to make peace. President Sadat was the first Arab leader to recognize the state of Israel since its creation in 1948. In September 1978, he met with Israeli Prime Minister Menachem Begin in the United States, where they negotiated a peace accord and, in 1979, a peace treaty. For their achievement, the leaders were awarded a joint Nobel Peace Prize. However, Sadat’s efforts were not so highly acclaimed in the Arab world. Arab states boycotted Egypt for breaking ranks and negotiating a separate treaty with Israel.

On 6 October 1981, a victory parade was held in Cairo to commemorate the eighth anniversary of Egypt’s crossing of the Suez Canal. Sadat was protected by four layers of security and eight bodyguards, and the army parade should have been safe due to ammunition-seizure rules. As Egyptian Air Force Mirage jets flew overhead, distracting the crowd, Egyptian Army soldiers and troop trucks towing artillery paraded by. One truck contained the assassination squad, led by Lieutenant Khalid Islambouli. As it passed the tribune, Islambouli forced the driver at gunpoint to stop. From there, the assassins dismounted and Islambouli approached Sadat with three hand grenades concealed under his helmet. Sadat stood to receive his salute. Anwar’s nephew Talaat El Sadat later said: “The president thought the killers were part of the show when they approached the stands firing, so he stood saluting them”. Islambouli threw all his grenades at Sadat, only one of which exploded (but fell short), and additional assassins rose from the truck, indiscriminately firing AK-47 assault rifles into the stands until they had exhausted their ammunition and then attempted to flee. After Sadat was hit and fell to the ground, people threw chairs around him to shield him from the hail of bullets. 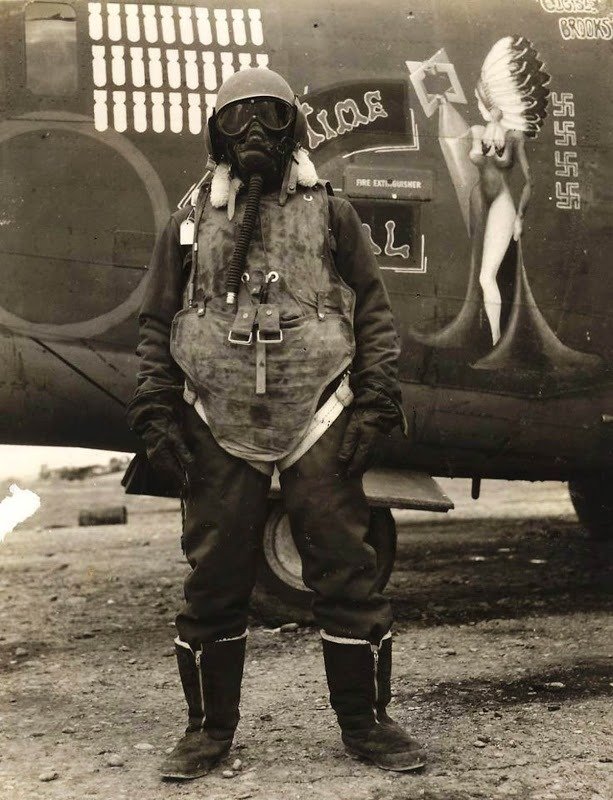 The airgunner on the picture is Major David G. Bellemere and behind him is the B-24 Liberator heavy bomber ‘Tepee Time Gal’. He’s wearing the typical flight clothing: M4 flak helmet with Polaroid B-8 goggles, flak jacket, F-2 electrical flying suit with B-3 jacket, A-14 oxygen mask, the gloves and ugg airmen boots.

Swastikas inscribed on the plane’s body represent number of German planes shot down (so-called kill counts). Bombs represent number of missions flown (so-called bombing run). Crews frequently got attached to their aircraft, as they are not only flying them but continually repairing and maintaining them. Additionally, it is one of the things they were allowed to personalize. More importantly, the plane was what carried them away from death and back to the safety of their airfield. The work you put into the maintenance and care for the plane is a culmination of the will you have to live on and survive.