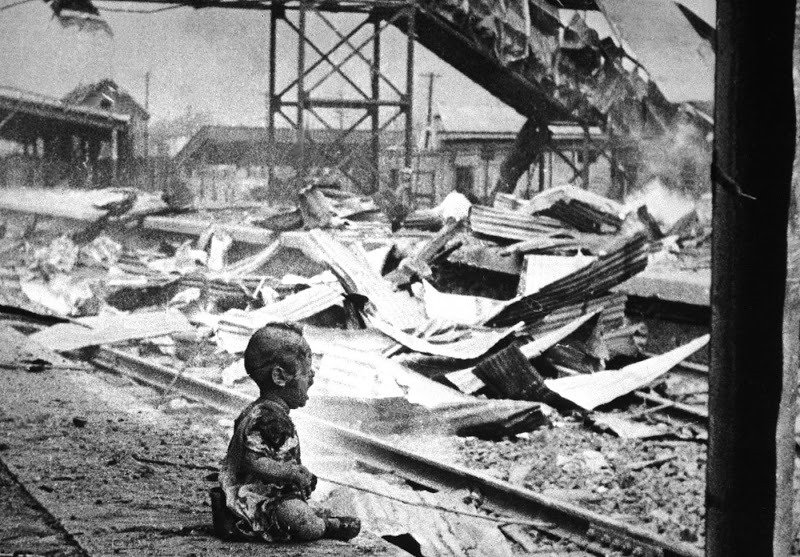 “Bloody Saturday” – Depicting a Chinese baby crying within the bombed-out ruins of Shanghai South Railway Station in 1937, the photograph became known as a cultural icon demonstrating Japanese wartime atrocities in China. Taken a few minutes after a Japanese air attack on civilians during the Battle of Shanghai, Hearst Corporation photographer H. S. “Newsreel” Wong, did not discover the identity or even the sex of the injured child, whose mother lay dead nearby. One of the most memorable war photographs ever published, and perhaps the most famous newsreel scene of the 1930s, the image stimulated an outpouring of western anger against Japanese violence in China. Journalist Harold Isaacs called the iconic image “one of the most successful ‘propaganda’ pieces of all time”. 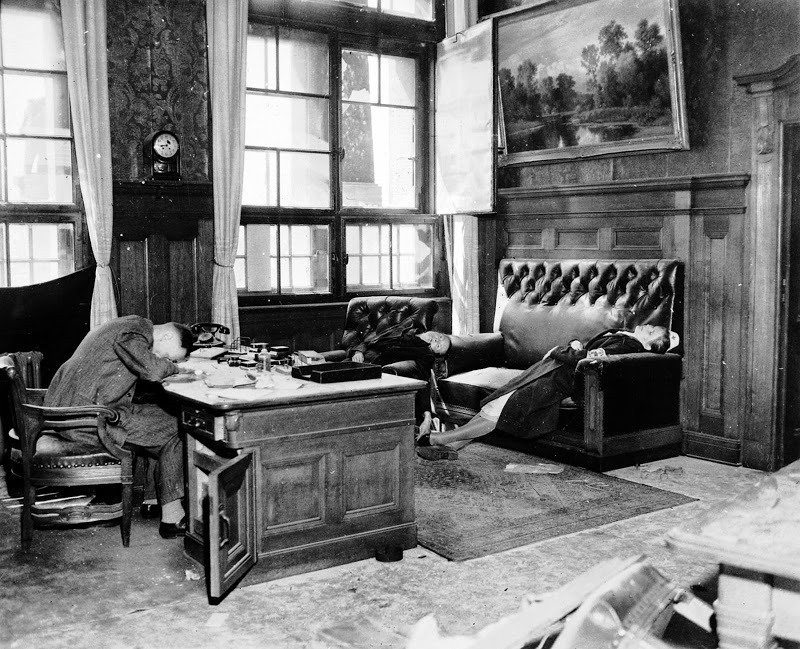 Deputy Mayor Ernst Kurt Lisso and his family after committing suicide by cyanide to avoid capture by US troops, 1945.

As the Red Army and the Western Allies pressed closer and closer to Berlin, suicides grew. Thousands of Germans committed suicide in the spring of 1945, rather than face occupation and the expected abuse by their victors. 3,881 people were recorded as committing suicide during April in the Battle of Berlin, although the figure is probably an underestimate. Although the motives was widely explained as the “fear of the Russian invasion”, the suicides also happened in the areas liberated by the British and American troops. 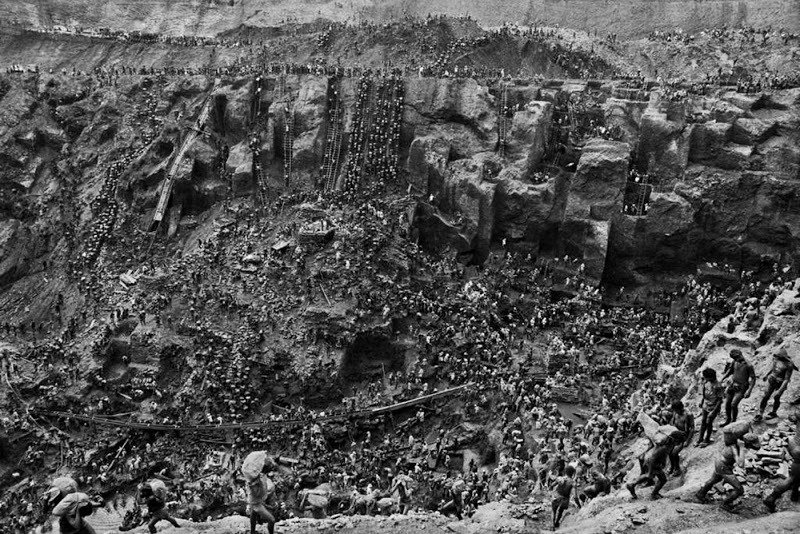 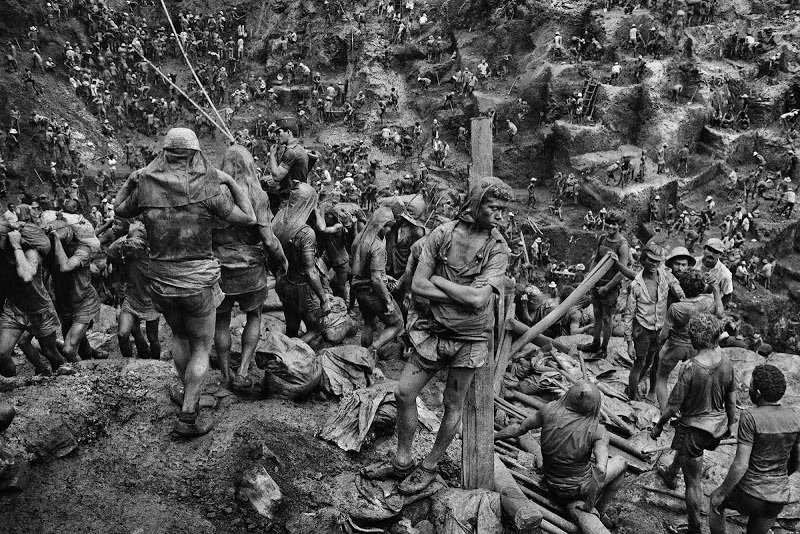 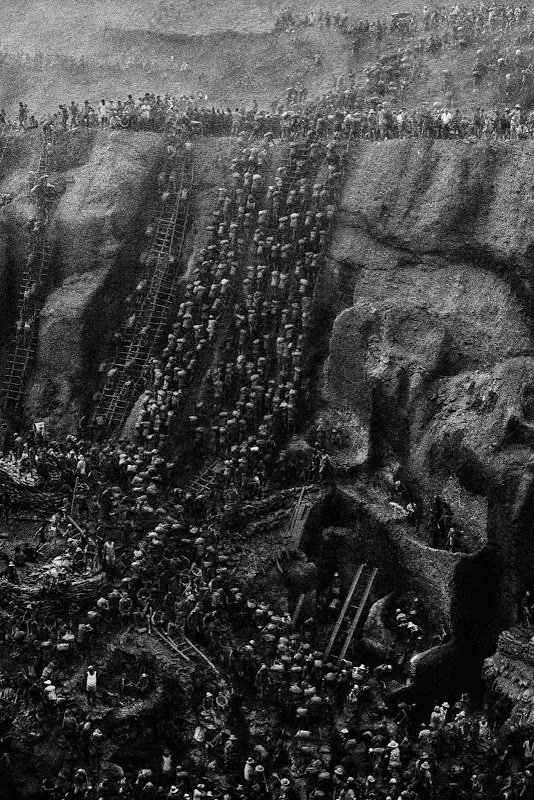 Serra Pelada was a large gold mine in Brazil 430 kilometres (270 mi) south of the mouth of the Amazon River. In 1979 a local child swimming on the banks of a local river found a 6 grams (0.21 oz) nugget of gold. Soon word leaked out and by the end of the week a gold rush had started. During the early 1980s, tens of thousands of prospectors flocked to the Serra Pelada site, which at its peak was said to be not only the largest open-air gold mine in the world, but also the most violent.

At first the only way to get to the remote site was by plane or foot. Miners would often pay exorbitant prices to have taxis drive them from the nearest town to the end of a dirt track; from there, they would walk the remaining distance—some 15 kilometers (9.3 mi) to the site. Huge nuggets were quickly discovered, the biggest weighing nearly 6.8 kilograms (15 lb), $108,000 at the 1980 market price ( now $ 310,173 in 2016). During the peak of the gold rush the mine was known for appalling conditions and violence, whilst the town that grew up beside it was notorious for both murder and prostitution.

The discovery of gold in Serra Pelada was unlike any other area on Earth, there was evidence that the gold formed supergenetically (meaning the gold was enriched near the surface by circulation of rain water) which is unique to the Amazon gold deposits. To this day the process of supergene enrichment is still unexplained. The best hypothesis so far is that rain water mixes with the decaying organic matter of the Amazon forest making the water acidic. This acidic water then becomes a ligand (an ionic network which gold can bond to and therefore be transported by) for gold molecules which then penetrate the ground and eventually accumulate to form an enriched gold zone. Some of the largest gold nuggets in the world formed in these areas.

In the pictures, there can be seen a lot of blocky areas, this is actually because for each miner it was assigned a 2mx2m area. People would just dig down (because that’s all they could do). This became a safety hazard because they didn’t know if the person who was assigned the 2mx2m lot next to them was still alive and digging down on their area. If they weren’t digging, then all the block around them would go deeper and deeper until that persons block became structurally unsafe and would collapse, killing workers it collapsed on.

During its peak, the Serra Pelada mine employed some 100,000 diggers or garimpeiros in appalling conditions, where violence, death and prostitution was rampant. The diggers scratched through the soil at the bottom of the open pit, filled it into sacks each weighing between 30 to 60 kilograms (65 and 130 pounds), and then carried the heavy sacks up some 400 meters of wood and rope ladders to the top of the mine, where it is sifted for gold. Because they work in mud, the gold diggers were called “mud hogs”. On average, workers were paid 20 cents for digging and carrying each sack, with a bonus if gold was discovered.

Three months after the gold’s discovery, the Brazilian military took over operations to prevent exploitation of the workers and conflict between miners and owners. Before the military takeover basic goods were sold for hugely inflated prices by the mine owners; water cost $3 a litre ($ 8.62 in 2016). The government agreed to buy all the gold the garimpeiros found for 75 percent of the London Metal Exchange price. Officially just under 45 tons of gold was identified, but it is estimated that as much as 90 percent of all the gold found at Serra Pelada was smuggled away. Using today’s prices that equates approximately to 1.5 billion dollars. 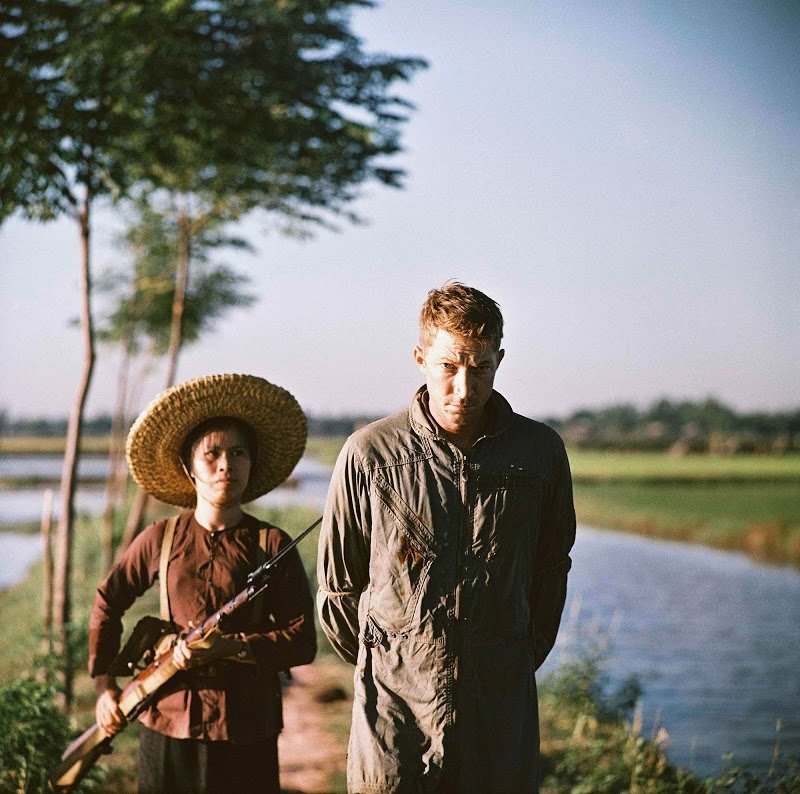 Downed US airman Dewey Waddell was taken captive by Vietnamese communist fighters in 1967, and he was released in 1973. The photo, taken by GDR war correspondent Thomas Billhardt, features a female guerrilla holding an American soldier captive and escorting him on a country road. The picture was created for propaganda purpose, hence the use of a really small woman as the guard to make the captured airman look more unheroic. Photographer Billhardt met Dewey Waddell in 1998. Waddell told him that the photo has positively impacted his life by helping his family and the US know that he remained alive. 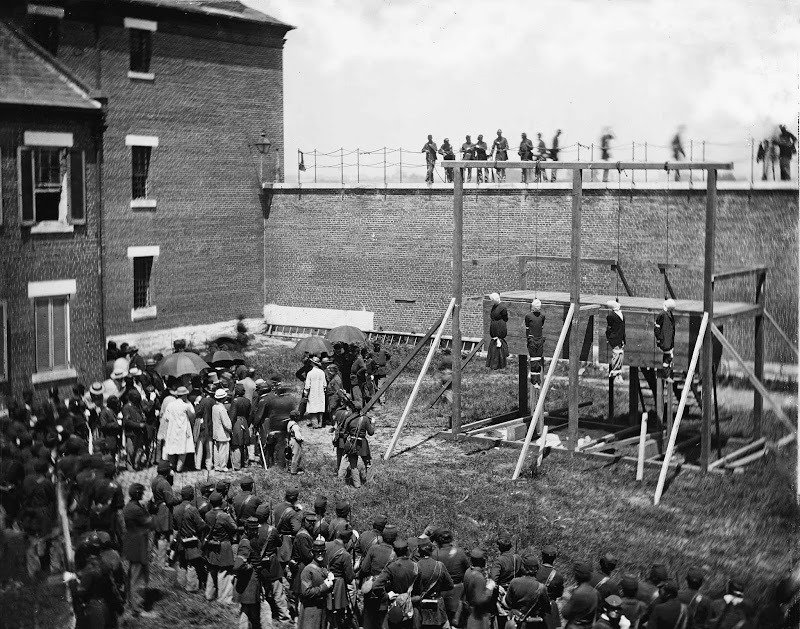 This photo from 1865 shows the hanging execution of the four Lincoln conspirators: David Herold, Lewis Powell, George Atzerodt and Mary Surratt. Their deaths were a culmination of sorts of a nation ravaged by war, bitter conflict, and the death of the nation’s commander-in-chief, Abraham Lincoln. Scottish photographer Alexander Gardner captured the macabre scene, including pictures of the condemned seen moments before they walked to the 12-foot gallows, specially constructed for the executions. It was hot that day, reportedly a hundred degrees (38 degree Celsius).

After the Lincoln assassination the government arrested several hundred people. Most were soon released due to lack of evidence. However, the government did charge eight people with conspiracy. On May 1, 1865, President Andrew Johnson ordered the formation of a military commission to try the accused persons. The actual trial began on May 10th and lasted for about seven weeks. The defendants were allowed to have lawyers and witnesses, but they were not allowed to testify themselves.

On June 29, 1865, the Military Commission met in secret session to begin its review of the evidence in the seven-week long trial. A guilty verdict could come with a majority vote of the nine-member commission; death sentences required the votes of six members. The next day, it reached its verdicts. The Commission found seven of the prisoners guilty of at least one of the conspiracy charges. Four of the prisoners: Mary Surratt, Lewis Powell, George Atzerodt, and David Herold were sentenced “to be hanged by the neck until he [or she] be dead”. Samuel Arnold, Dr. Samuel Mudd and Michael O’Laughlen were sentenced to “hard labor for life, at such place at the President shall direct”, Edman Spangler received a six-year sentence. The next day General Hartrandft informed the prisoners of their sentences. He told the four condemned prisoners that they would hang the next day.

David Herold — An impressionable and dull-witted pharmacy clerk, Herold accompanied Booth to the home of Dr. Samuel Mudd, who set Booth’s injured leg. The two men then continued their escape through Maryland and into Virginia, and Herold remained with Booth until the authorities cornered them in a barn. Herold surrendered but Booth was shot and died a few hours later.

Lewis Powell — Powell was a former Confederate prisoner of war. Tall and strong, he was recruited to provide the muscle for the kidnapping plot. When that plan failed, Booth assigned Powell to kill Secretary of State William Seward. He entered the Seward home and severely injured Seward, Seward’s son, and a bodyguard.

Mary Surratt — Surratt owned a boarding house in Washington where the conspirators met. Sentenced to death, she was hanged, becoming the first woman executed by the United States federal government.

George Azterodt — German-born Azterodt was a carriage painter and boatman who had secretly ferried Confederate spies across Southern Maryland waterways during the war. Recruited by Booth into the conspiracy, he was assigned to kill Vice President Andrew Johnson, but lost his nerve and stayed in a hotel bar, drinking, instead.