Here is part 38 of our Interesting Historical Photos series. 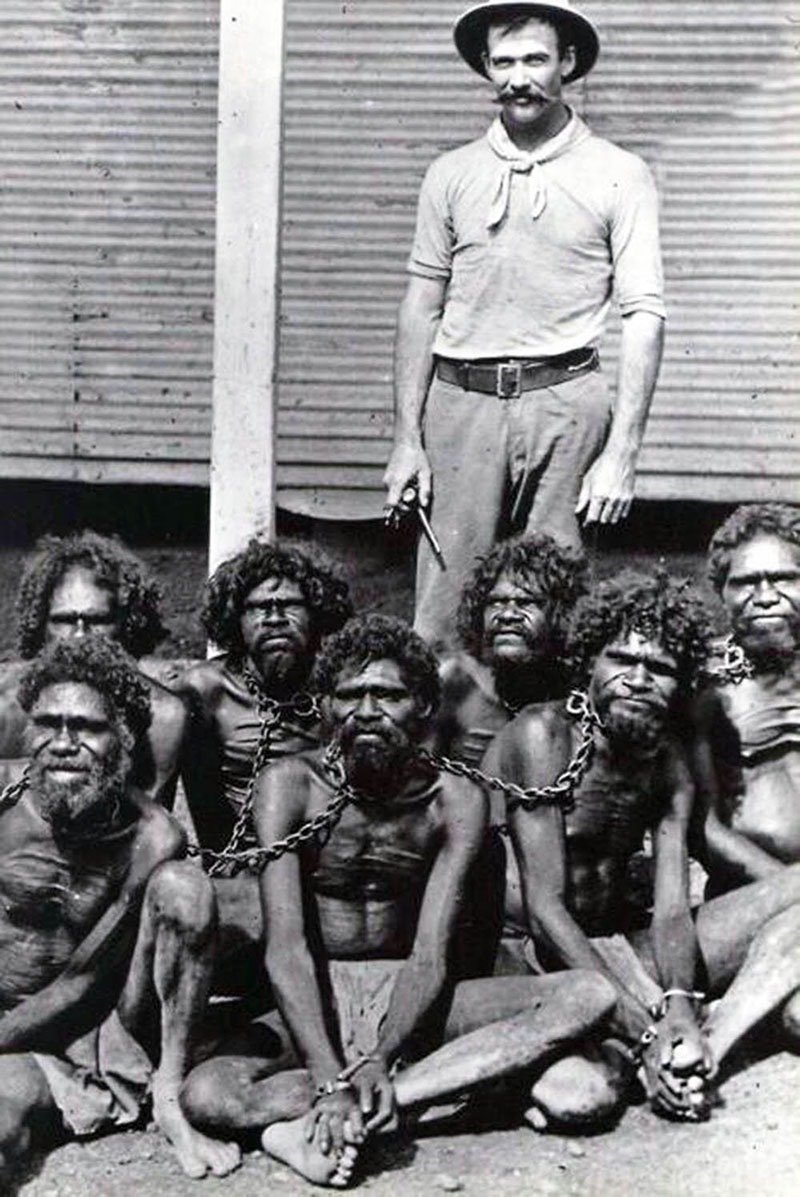 The prison was established in 1886 as a result of a gold rush at Halls Creek. However the circumstances and the story behind this picture remain unknown. The Aboriginals could have been arrested under the various local laws passed that forbid them from entering or being within a certain distance of named towns. They could also have been arrested for drinking or owning firearms which was illegal for them at various times. It’s also possible that they have been rounded up to be moved to a reserve areas which were being created at the time and that these individuals did not want to move. It could even be a staged picture for tourists/publicity reasons. 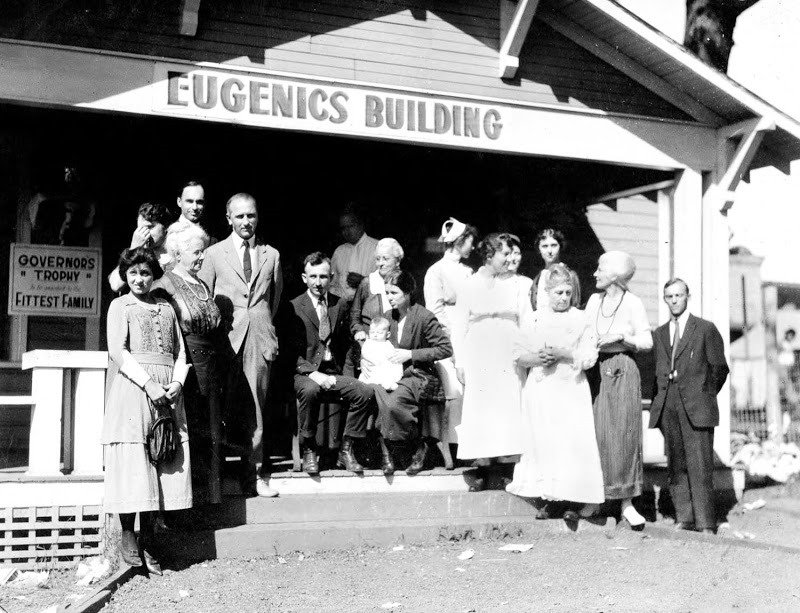 Winning family of the Fittest Family award stands outside of the Eugenics Building, 1925.

The American Eugenics Society presented eugenics exhibits at state fairs throughout the USA, and provided information encouraging “high-grade” people to reproduce at a greater rate for the benefit of society. The Society even sponsored Fitter Family contests. First appearing in 1920 at the Kansas Free Fair, Fitter Family competitions, continued all the way until WWII. There were several different categories that families were judged in: size of the family, overall attractiveness, and health of the family, all of which helped to determine the likelihood of having healthy children. These competitions promoted certain physical and mental qualities. 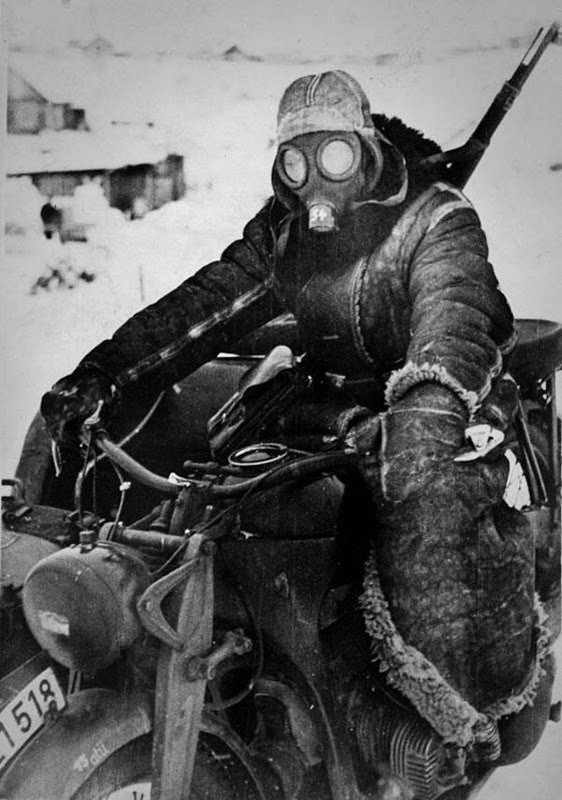 Riding on an exposed vehicle in the Russian Winter, here a combination motorcycle, required protective clothing. This Kradfahrer wears a sentry’s fur-lined overcoat, heavy mittens, the fur-lined cap of the reversible winter suit, which is no doubt being worn beneath the overcoat, and a gas-mask for face protection. The air filter canister has been removed from the gas-mask 38. Special extra eyepiece lens were issued for cold weather to prevent fogging by creating an airspace between the two lens. 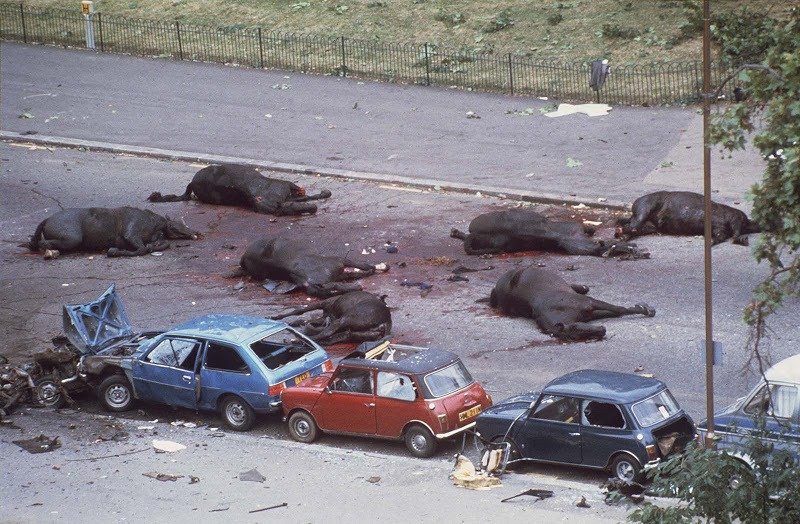 Seven horses of the Queen’s Household Cavalry lie dead after the IRA detonated a nail bomb, 1982.

The Hyde Park and Regent’s Park bombings were one of the worst IRA atrocities on the British mainland, killing 11 soldiers and seven horses and leaving dozens injured. The bombs were detonated just a couple of hours apart on July 20, 1982, and timed to cause maximum casualties. The military casualties were quickly removed. But long-range camera lenses captured, in dreadful detail, the aftermath with the shattered remains of the car bomb surrounded by dead horses. Part of the power of the image is that it shows how indiscriminate the attack was. The soldiers were in general the primary target, but the terrorists were willing to accept whatever collateral damage came with them – including these horses. The dead and dying horses reinforce the brutality of the act, and thus the power of the image. 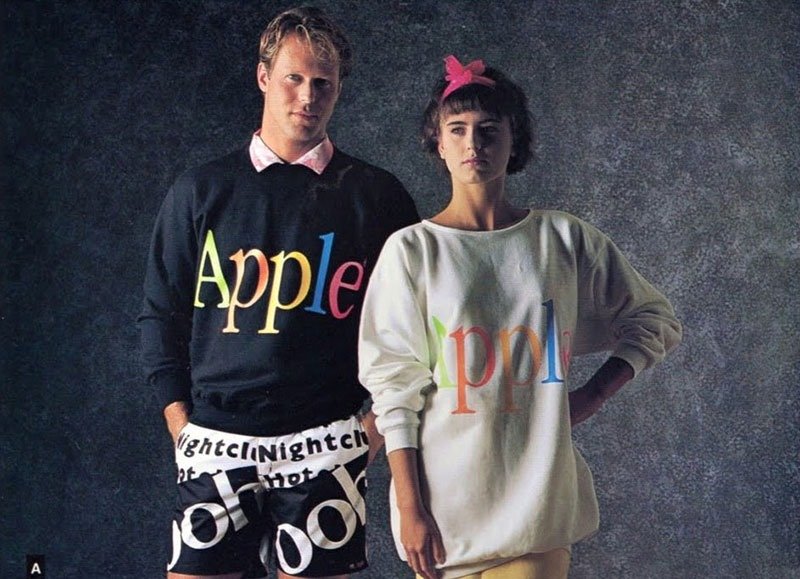 Back in 1986, Apple released a clothing line it called “The Apple Collection,” filled with oversized sweatshirts, windbreakers, and obnoxiously bright patterns. It’s hard to imagine that black-turtleneck aficionado Steve Jobs would have approved of these clothes – the catalogue was released a year after he left the company. 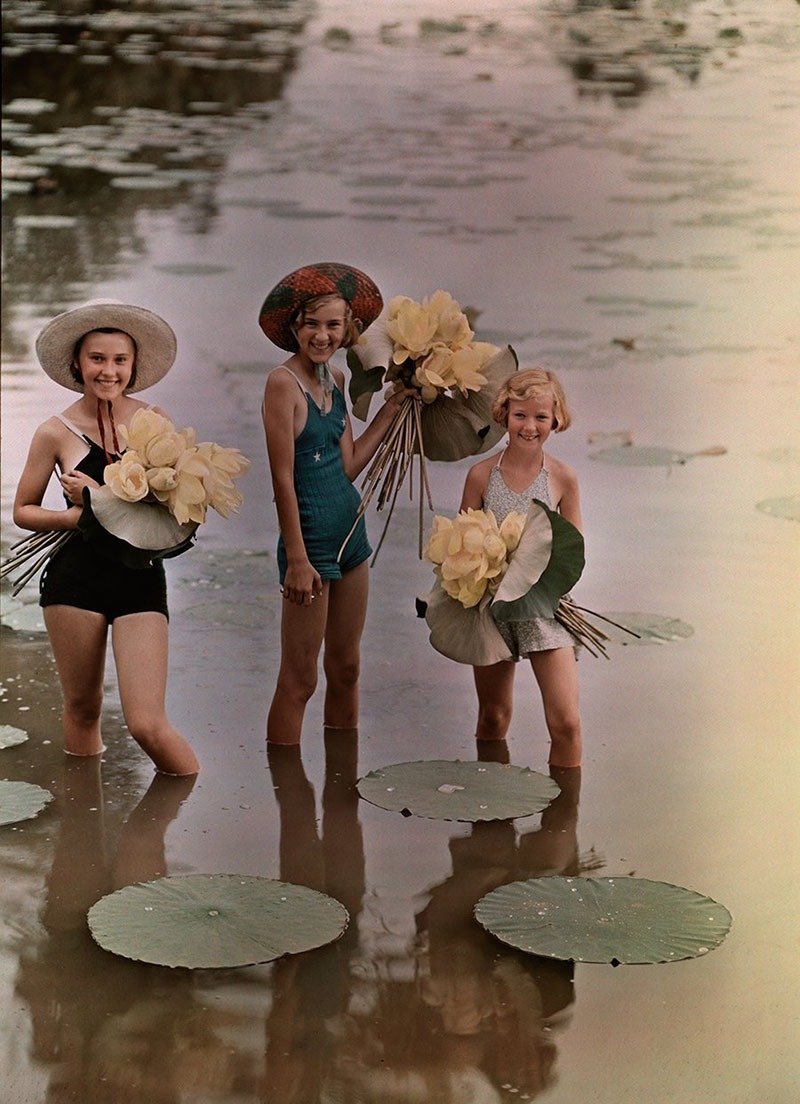 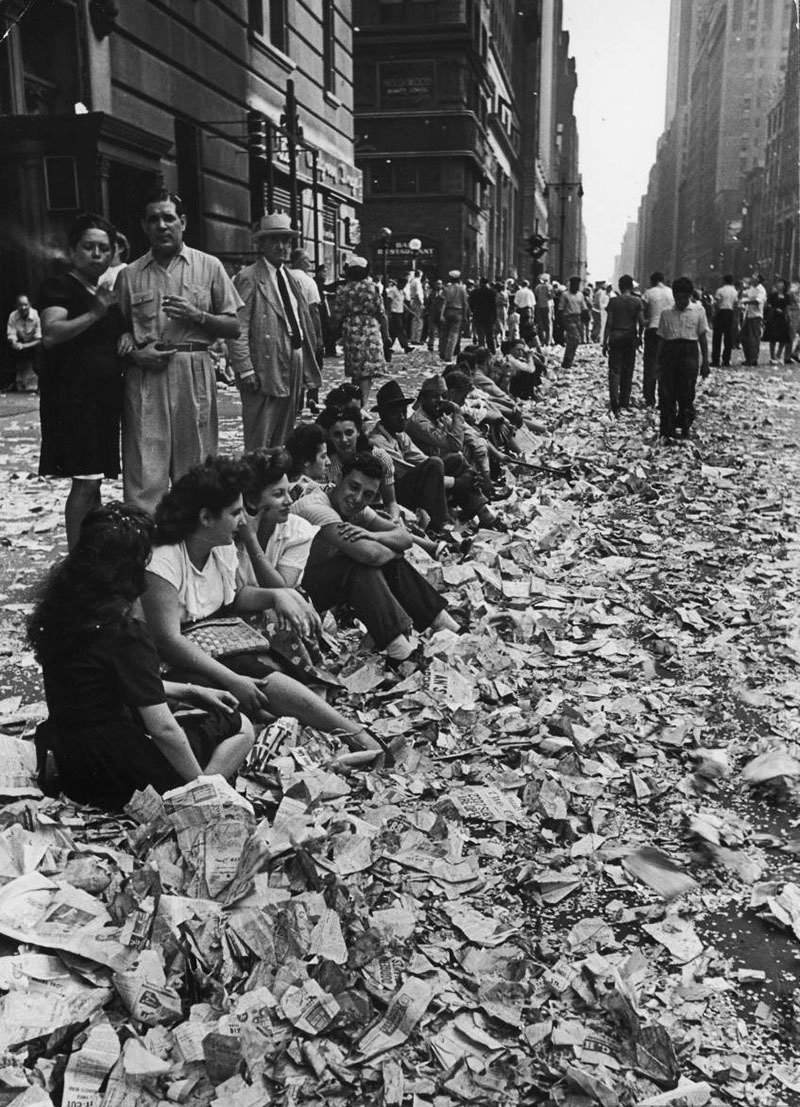 People sitting on curb among tickertape and confetti after celebrating the end of WWII on VJ Day in NYC, August 14, 1945.

A ticker tape parade is a parade event held in a built-up urban setting, allowing large amounts of shredded paper (originally actual ticker tape, but now mostly confetti) to be thrown from nearby office buildings onto the parade route, creating a celebratory effect by the snowstorm-like flurry. The concept originates from and is most usually associated with the United States, especially with New York City.

08. Girls in the Windows 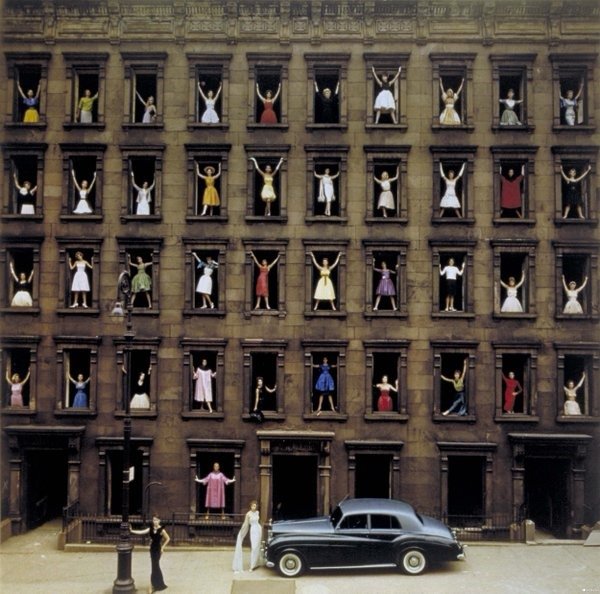 Girls in the Windows, 1960. Photograph by Ormond Gigli.

In 1960, while a construction crew dismantled a row of brownstones right across from his studio on East 58th Street, photographer Ormond Gigli was inspired to, somehow immortalize those buildings. They had to work quickly to secure City permissions, arrange for models which included celebrities, the demolition supervisior’s wife (third floor, third from left), his own wife (second floor, far right), and also secure the Rolls Royce to be parked on the sidewalk. Careful planning was a necessity as the photography had to be accomplished during the workers’ lunch time!

The day before the buildings were razed, the 43 women appeared in their finest attire, went into the buildings, climbed the old stairs, and took their places in the windows. 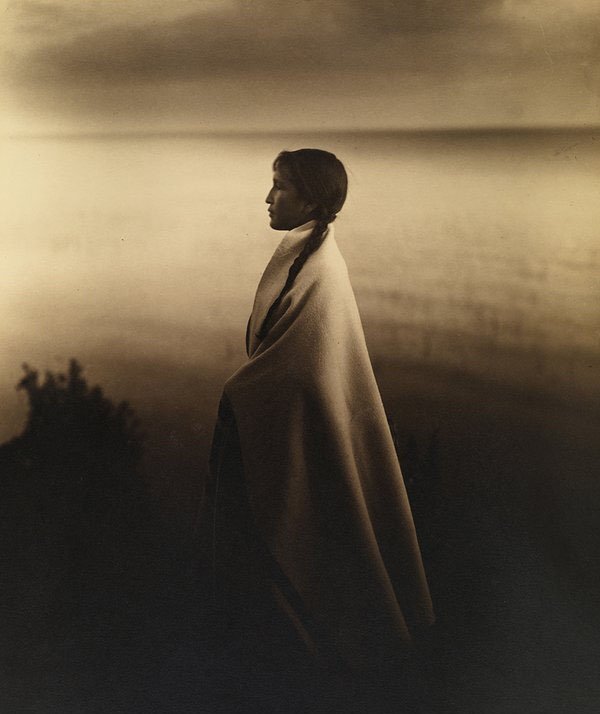 Portrait of an Ojibway, or Chippewa Indian girl in 1907, by Roland W. Reed. 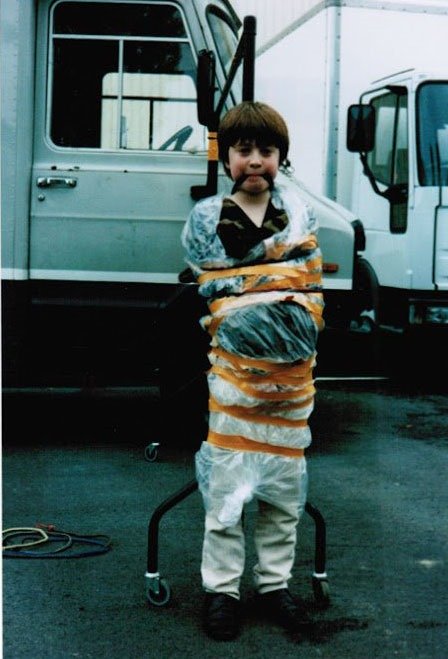 Daniel Radcliffe tied up on the set of “David Copperfield” after spraying crew members with a water pistol, 1999.

On his official Google+ page, Daniel Radcliffe shared a hilarious and adorable photo of himself on the set of his first film, David Copperfield back in 2013. He added, “Throwback Thursday: So I’m going to post a previously unseen photo from my life here every so often. This is an example that could look like child cruelty but was actually one of the funniest memories from my first job! On David Copperfield when I was 10, I had been running round one day during the summer spraying various crew members with a water pistol I had, unwisely, been given. This is a photo of me playfully getting what I deserved… -Dan”