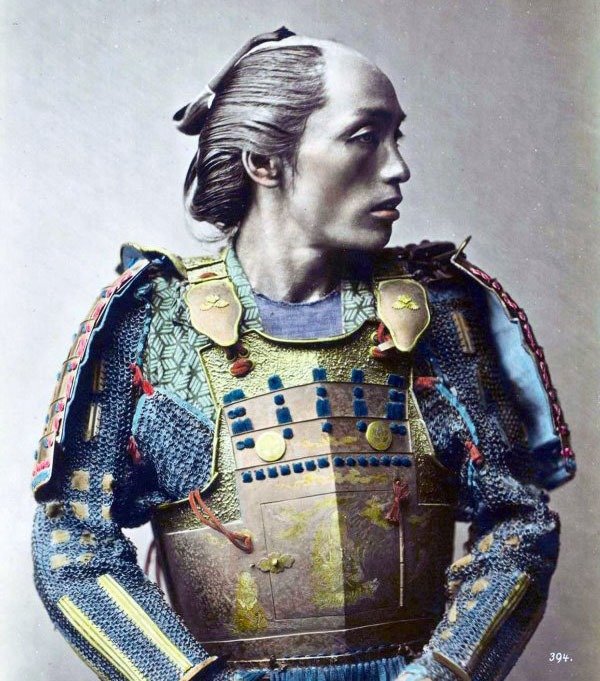 Hand-colored photo of a Japanese Samurai warrior from 1881. Photograph by by Franz von Stillfried-Ratenicz.

Samurai Warriors dominate our minds as we think of historical Japan, and with good reason. In their early years, they were the protectors of Japanese Aristocrats and Royalty, but as they realized their leaders were not taking the country in the direction the desired, they revolted, staging a military coup that changed Japan forever. From 1192 to 1867 the Samurai class controlled Japan, ruling through the power of the sword and their honor. The Japanese Koto Sword became a symbol of status, evoking fear at the swift justice a Samurai might carry out. While Samurai leadership has disappeared from Japan, the spirit and traditions have not completely died. Sword makers still attempt to recreated the magic processes used in the manufacture of Koto swords. Their concepts of honor, saving face, and loyalty affect every facet of Japanese culture. 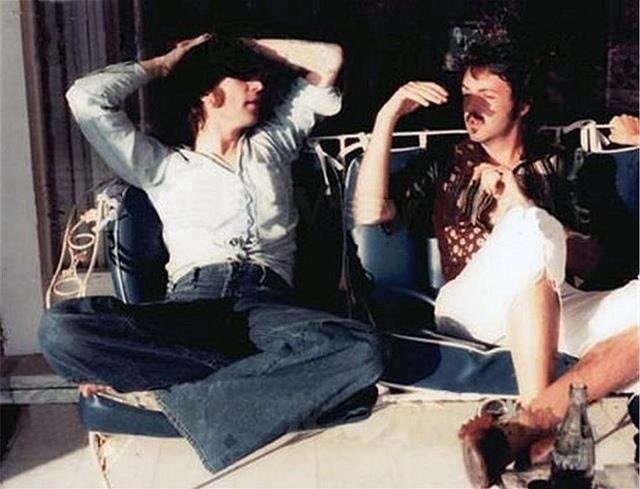 Last known photo of Lennon and McCartney together, 1974. Photograph by May Pang.

The Beatles had partial studio reunions on official releases into the ’80s, but never with more than three members present — and never with Paul McCartney and John Lennon on the same session. That, as much as anything, seemed to be keeping the group apart. But the two former bandmates did, in fact, collaborate during one coke-fueled, slapdash night on March 28, 1974, at the Burbank Studios in Los Angeles. It was more than enough to fuel years of comeback rumors.

Lennon was producing Harry Nilsson’s latest album, Pussy Cats, when Paul and Linda McCartney dropped in after the first night of the sessions, aka “the Jim Keltner Fan Club Hour”, at Burbank Studios on 28 March 1974. They were joined by Stevie Wonder, Harry Nilsson, Jesse Ed Davis, May Pang, Bobby Keys and producer Ed Freeman for an impromptu jam session.

They produced a bootleg album named “A Toot and a Snore in ’74”. 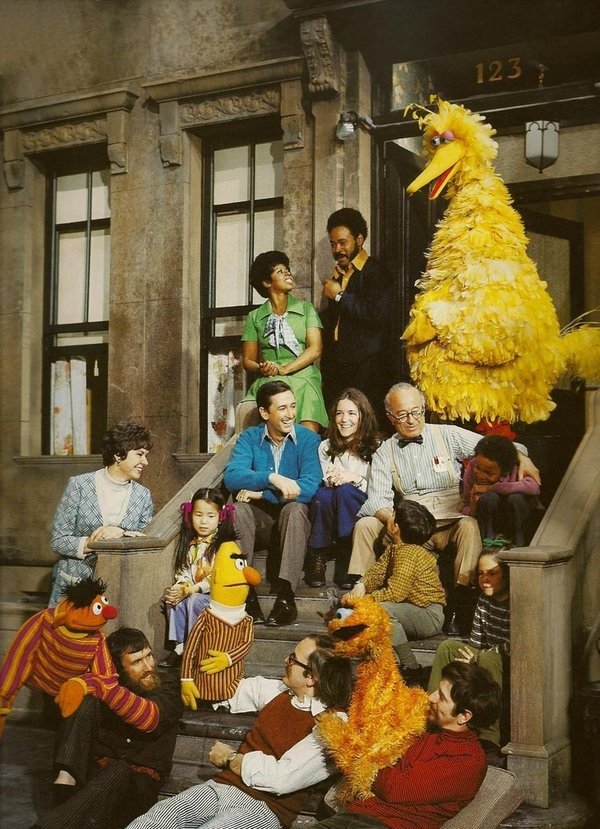 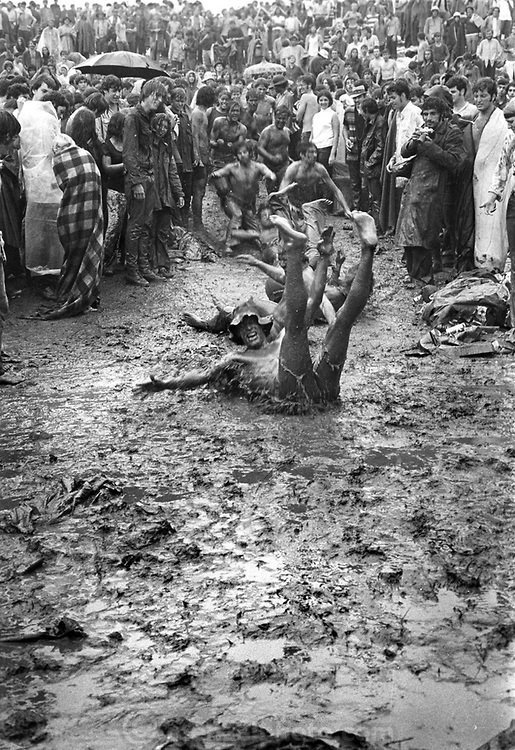 Started by four very young and wealthy men, Woodstock became a part of history in the Summer of ’69, but many fail to recognize the obstacles that had to be overcome to carry out such a large scale performance. Just over a month before the festival, the city of Wallkill, New York bans the Woodstock festival in the city limits by law. However, days later, Max Yasgur offers up his 600-acre dairy farm in the town of Bethel, New York. 50,000 people show up two days early while crews are still trying to complete construction and landscaping, including stages, parking lots, and concession stands. There was not enough time to build ticket booths, nor gates to control the flow of people.

Although it was recorded that 50,000 people were going to attend the festival, approximately 200,000 showed up on the first day. As a result, traffic, space, food venues, and other complications proved to be a growing altercation. It was later found that one million people attempted to attend, but around 500,000 were actually present. The massive amounts of people were overwhelming, so much that food, toilets, and water had to be flown in my helicopter to ease the chaos. There also seemed to be an unnatural amount of rainfall that weekend in combination with freshly plowed soil.

When Woodstock finally came to an end, they organizers were left with $1 million dollars in debt, 70 lawsuits, hundreds of drug related health emergencies, and outstanding damage and trash left behind to clean up. A film was made in honor. It generated enough money to pay off all but $100,000 debt left over to the four founders. 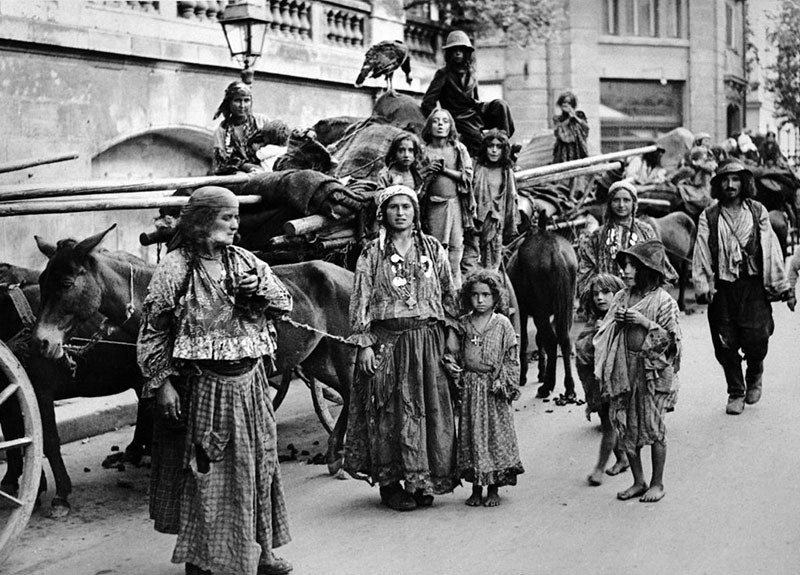 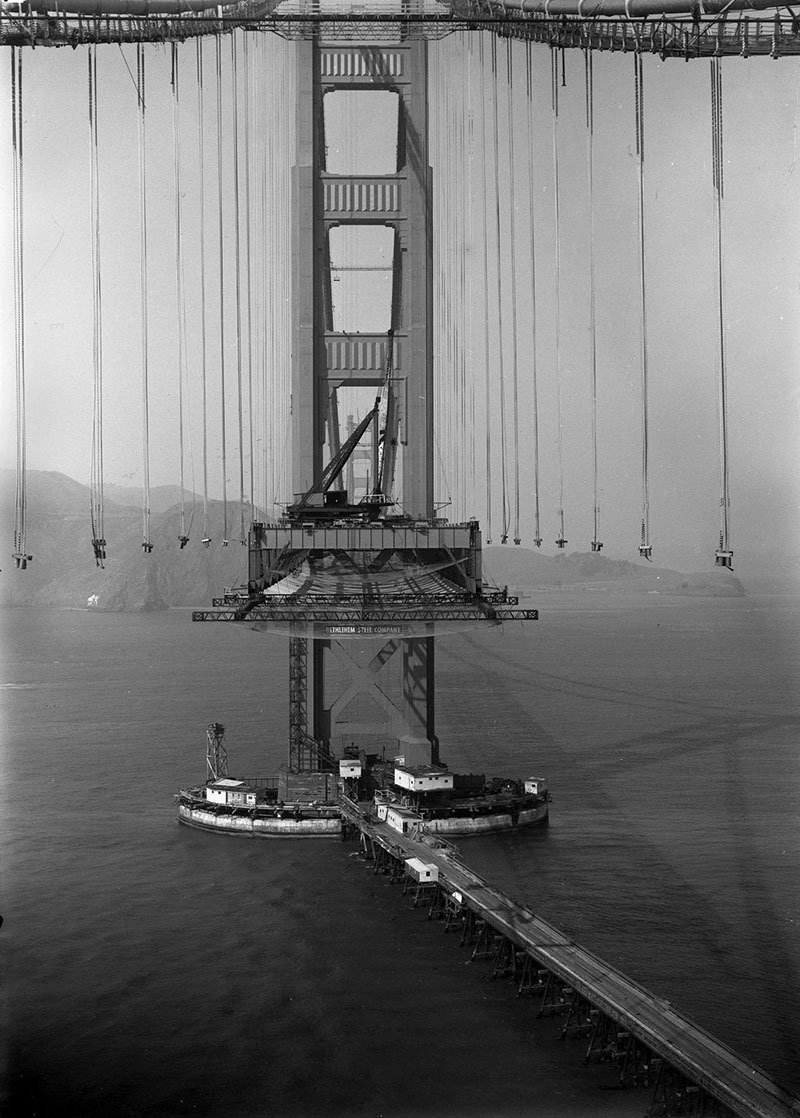 Building the Golden Gate, 1933. From the Dean W. Kinter collection at the Academy of Sciences Research Library, CA. 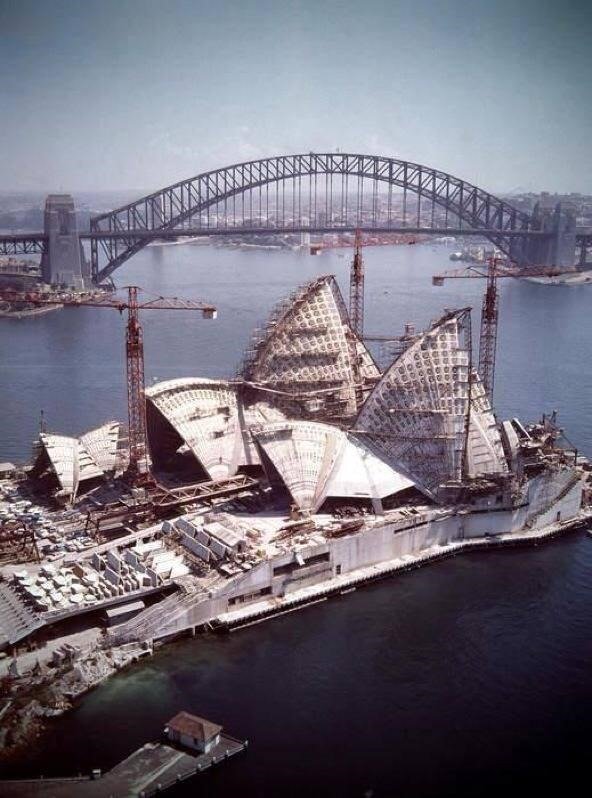 Sydney Opera House under construction, 1966. Photograph from the National Archives of Australia.

The Sydney Opera House is one of the 20th century’s most iconic buildings. It broke new ground for design and engineering around the world. The story of the Opera House is a drama that for more than 15 years grabbed national headlines and pitted the artistic vision of the architect Jorn Utzon against the politics and budgets of the New South Wales government and the limits of architecture and construction. 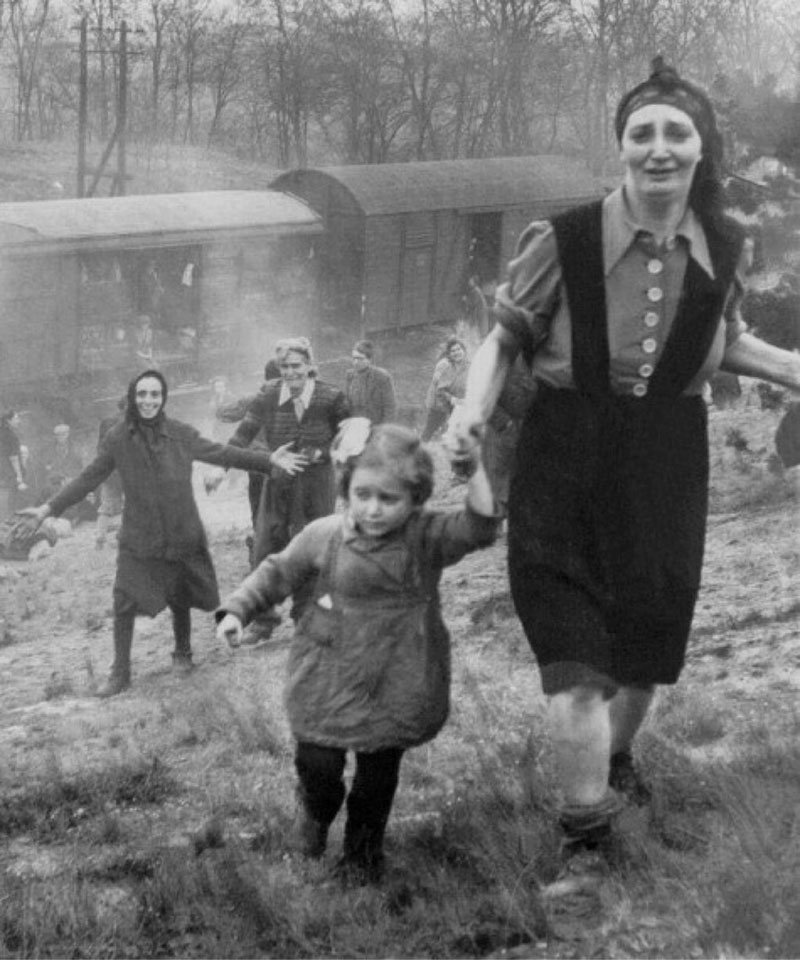 Jewish refugees become aware that they have just been liberated, April, 1945. Photograph by Major Clarence Benjamin. 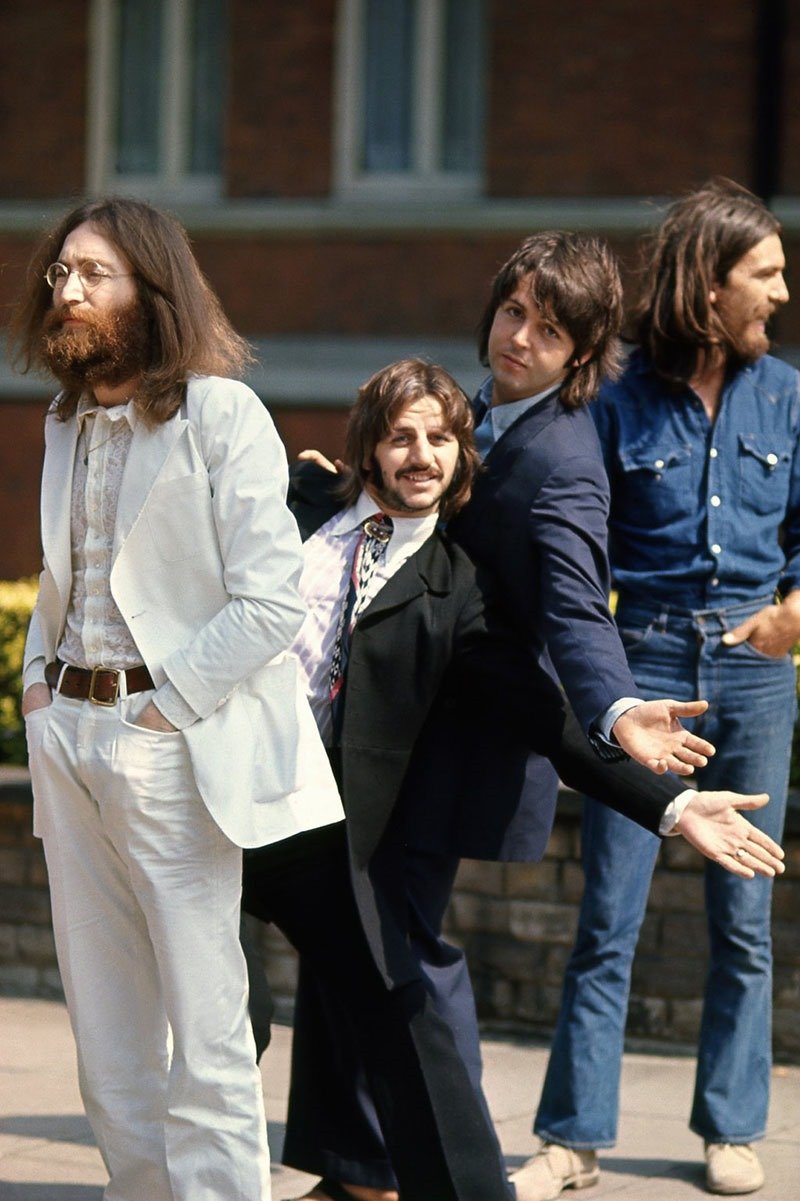 The cover photo for The Beatles’ Abbey Road album is looked at as one of the most celebrated photos of the music industry. It was in the midst of a time of rebellion, change and revolution and the Beatles voice was at the forefront of it all. On August 8th, 1969, around 11:30 that morning, photographer Iain Macmillan was given only ten minutes to take the infamous photo as he stood on a step-ladder while a policeman held up traffic, which was based on a sketch by Paul McCartney. In the scene, the group walk across the street in single file from left to right, with Lennon leading, followed by Starr, McCartney, and Harrison. McCartney is barefoot and out of step with the other members. With the exception of Harrison, the group are wearing suits designed by Tommy Nutter. 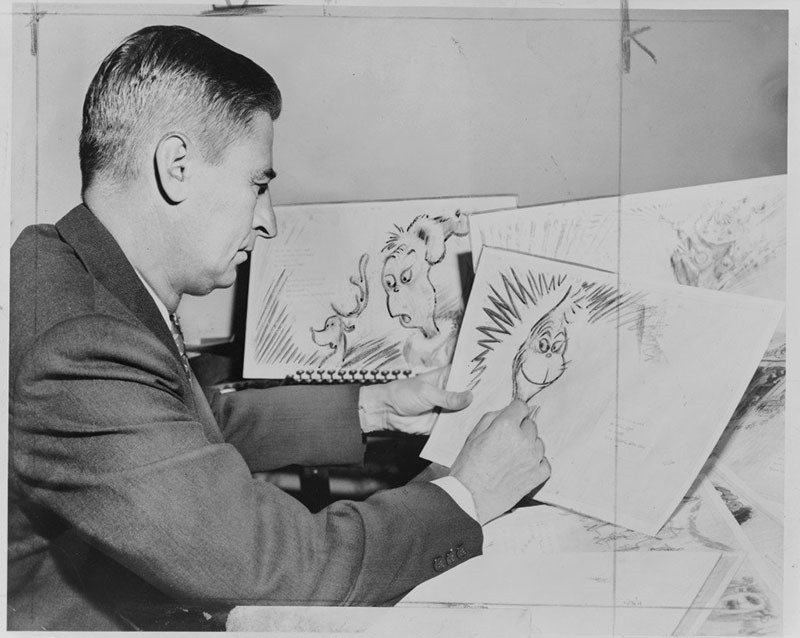