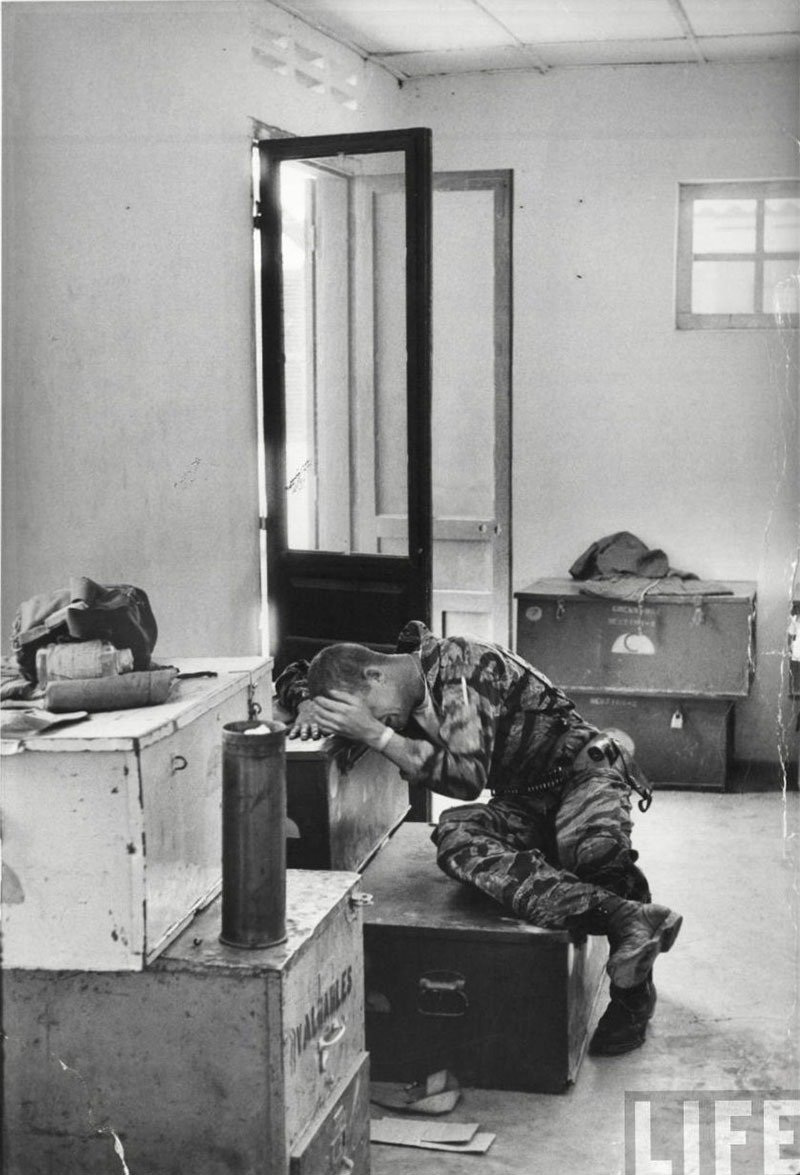 Story behind the photograph: “The Vietcong dug in along the tree line, were just waiting for us,” the 39-year-old British photo journalist who took the famous photograph reported. “We were all like sitting ducks and their raking crossfire was murderous. Over the intercom system one pilot radioed Colonel Ewers, who was in the lead ship: ‘Colonel! We’re being hit.’ Back came the reply: ‘We’re all being hit. If your plane is flyable, press on.”

Here, Lance Cpl. James Farley cries after having just witnessed the shooting of two crew mates, one fatally. Crew Chief Farley, with his guns jammed and two wounded comrades aboard, tried to in vain save a wounded comrade. The photo taken from inside the helicopter was the LIFE Magazine cover on April 16, 1965.

“Not until YP13 pulled away and out of range of enemy fire were Farley and 20-year-old gunner, Pfc. Wayne Hoilien able to leave their guns and give medical attention to the two wounded men from YP3. The co-pilot, 1st Lt. James Magel, was in bad shape. When Farley and Hoilien eased off his flak vest, they exposed a major wound just below his armpit. “Magel’s face registered pain,” Burrows reported, “and his lips moved slightly. But if he said anything it was drowned out by the noise of the copter. He looked pale and I wondered how long he could hold on. Farley began bandaging Magel’s wound. The wind from the doorway kept whipping the bandages across his face. Then blood started to come from his nose and mouth and a glazed look came into his eyes. Farley tried mouth-to-mouth resuscitation, but Magel was dead. Nobody said a word.” 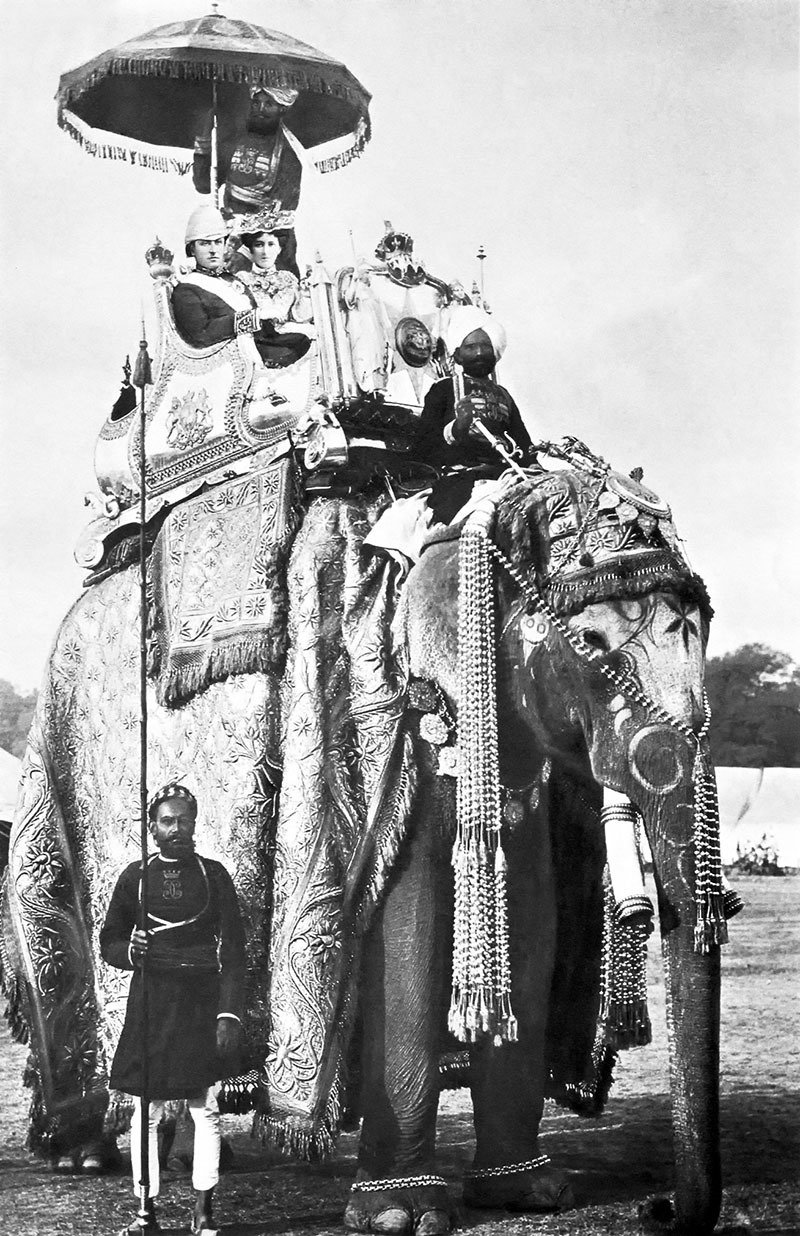 Lord and Lady Curzon, Viceroy and Vicereine of India, atop the elephant named Lakshman Prasad on their way to inspect the Delhi Durbar, Delhi, Dec 29, 1902.

Some more photos of interest – Lord Curzon with Lady Curzon and the Maharaja of Gwalior, Rajasthan, India pose with the trophies of their hunt. A typical tiger hunting scene in British India. Further reading – A Concise History of Tiger Hunting in India. 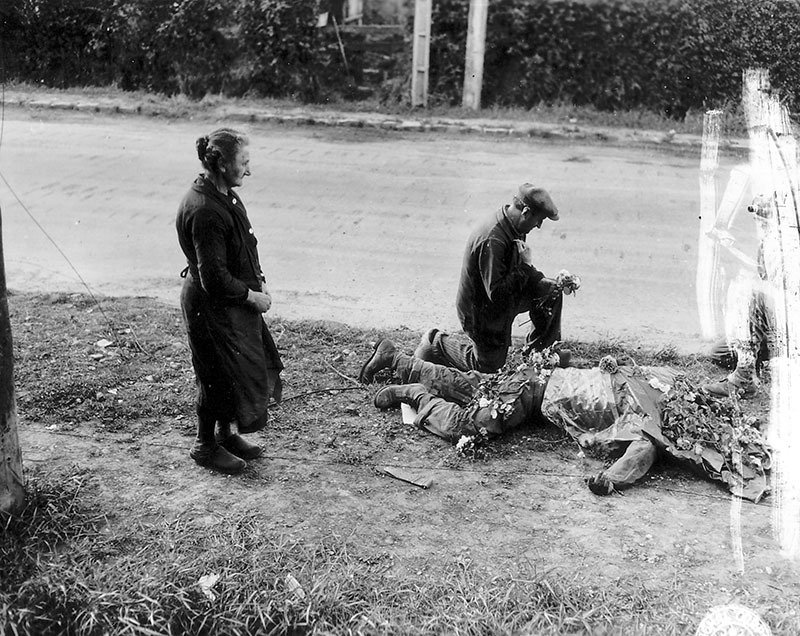 Those white smudges on the right that everyone assumes are due to censorship are actually marks from the magazine editor. In those days, proofs of the entire negative were made from which an editor would mark crop lines (that vertical line with the V shape next to it). He decided that the soldier on the right didn’t really contribute anything to the editorial content, so he was trimmed out. That happened all the time in news photography then, and it still does now. This was not some mass conspiracy; this was an artistic decision. 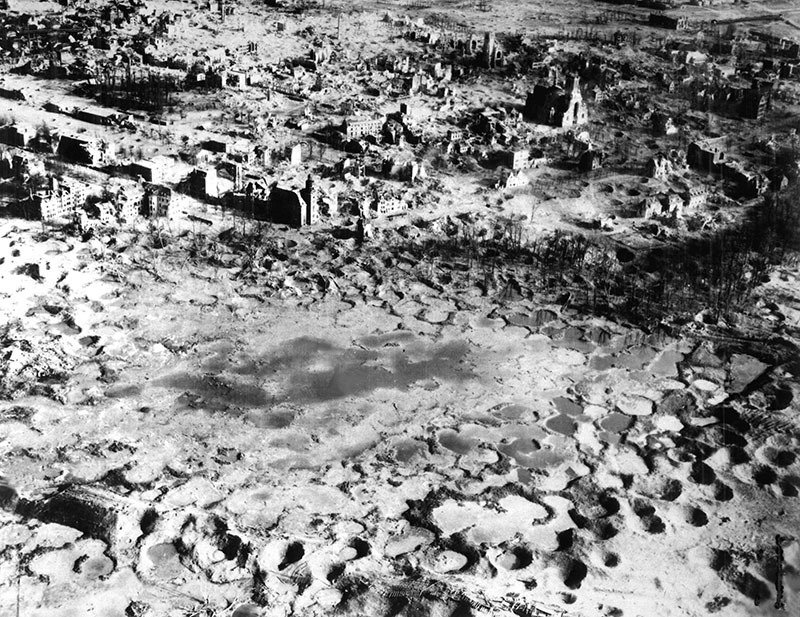 Wesel, Germany shows the effects of carpet bombing by the Allies, 1945.

The German town of Wesel was heavily bombed in Allied air raids during World War II. Between this and the attacks in support of the crossing of the Rhine, the town was devastated. Wesel became a target of the Allies, particularly in its strategic position as a depot with bridges on the Rhine. On the 16, 17, 18 and 19 February 1945, the town was attacked by the British Royal Air Force with impact and air-burst weapons and almost entirely destroyed. 97% of the town was destroyed before it was finally taken by Allied troops and the population had fallen from almost 25,000 in 1939 to 1,900 in May 1945. 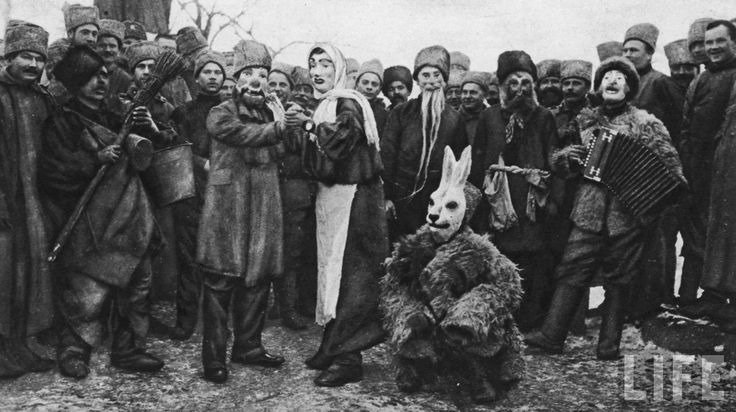 Russian soldiers wearing disturbing costumes for an impromptu performance behind the lines during a lull in the World War I fighting, March 22, 1916.

These are traditional costumes (“Ryazhenye”) used to celebrate “Maslenitsa” during the last week of the Great Lent (Feb-March). The tradition goes back to pagan times and is similar to Halloween. You can call it disturbing but well… it is as disturbing as a costume of the Wicked Witch of the West.