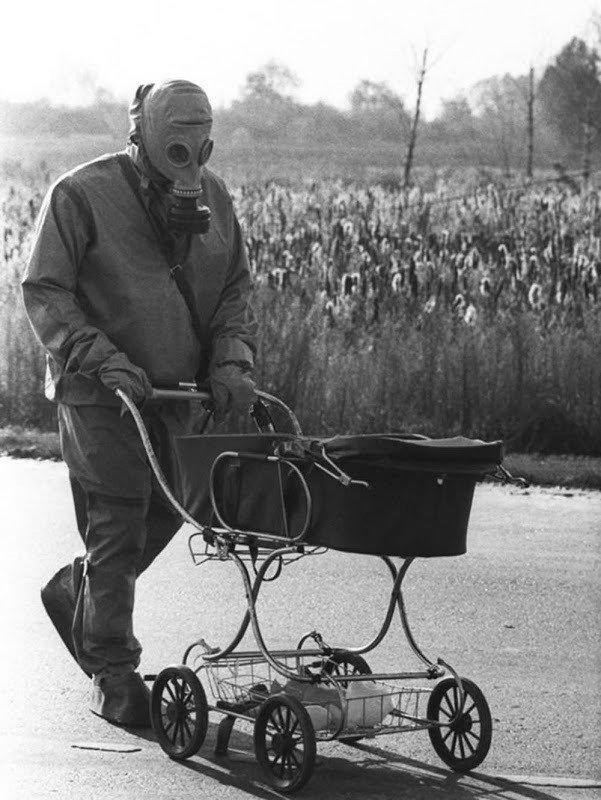 A liquidator, clad in a gas mask and protective clothing, pushes a baby in a carriage who was found during the cleanup of the Chernobyl nuclear accident, 1986. The infant had been left in an abandoned house in the village of Tatsenki. The worker found the child when he was measuring radiation levels.

Initially, authorities tried to use robots to do the job of removing the dangerous debris, but after a few days the high levels of radiation damaged the electronic circuitry of the machines. The dangerous nuclear cleanup job fell to what the government of the former Soviet Union called: the liquidators — a corps of soldiers, firefighters, miners, and volunteers. The word “liquidator” is derived from the Russian verb “likvidator” ( which means “to eliminate”). Soon after the explosion it became clear that the consequences of the accident could not be “eliminated” but only “reduced” however the title was already in common use by this point.

At the peak of the cleanup, an estimated 600,000 workers were involved in tasks such as cleaning up the debris from around the reactor, water filtration systems, decontamination, destruction and burial of contaminated buildings, and the “sarcophagus” that entombs the rubble of Chernobyl reactor number four.

The International Atomic Energy Agency (IAEA) says some 350,000 of the liquidators in the initial plant cleanup received average total body radiation doses of 100 millisieverts. That’s a dose equal to about 1,000 chest x-rays and about five times the maximum dose permitted for workers in nuclear facilities. The Soviets did not have adequate protective uniforms, so those enlisted to enter highly radioactive areas cobbled together their own shields. The health toll for the survivors continues to be a matter of debate. One advocacy group, says 90,000 of the 200,000 surviving liquidators have major long-term health problems. 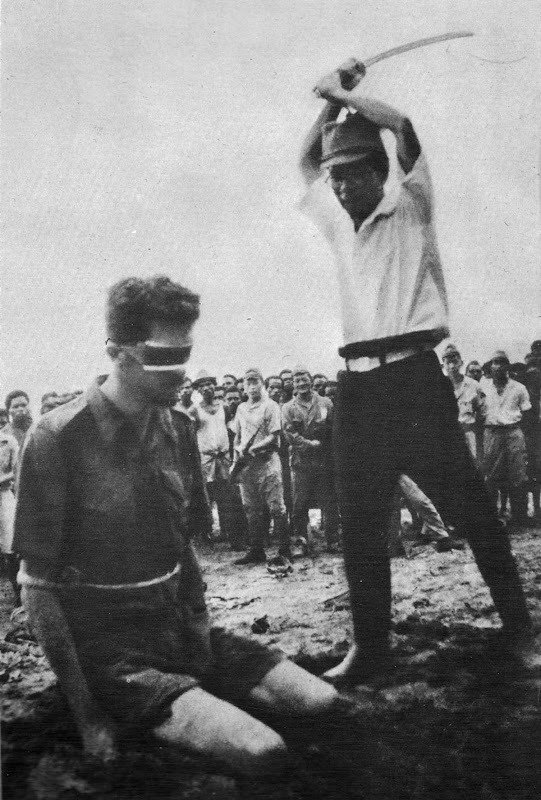 Leonard Siffleet about to be beheaded with a sword by a Japanese soldier, 1943.

Leonard Siffleet was an Australian Special Forces radio operator, sent on mission to Papua New Guinea to establish a coastwatching station. In September 1943, his patrol was sent to Japanese held New Guinea, to recon the Japanese forces stationed there. Siffleet and two other Australian soldiers were captured by local natives friendly to the Japanese and turned over to the Japanese.

All three men were interrogated, tortured and confined for approximately two weeks before being taken down to Aitape Beach on the afternoon of 24 October 1943. Bound and blindfolded, surrounded by Japanese and native onlookers, they were forced to the ground and executed by beheading, on the orders of Vice-Admiral Michiaki Kamada of the Imperial Japanese Navy. The officer who executed Siffleet, Yasuno Chikao, detailed a private to photograph him in the act. At the end of the war, Chikao was captured, tried for war crimes and sentenced to be hanged; his sentence was commuted to ten years imprisonment, and upon completion of his sentence, he returned to Japan. 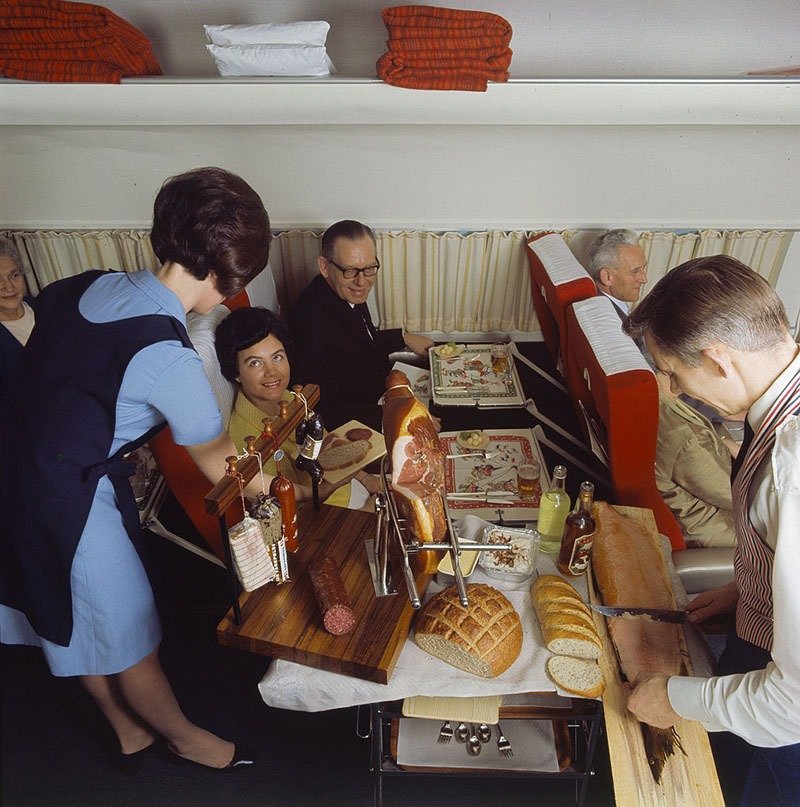 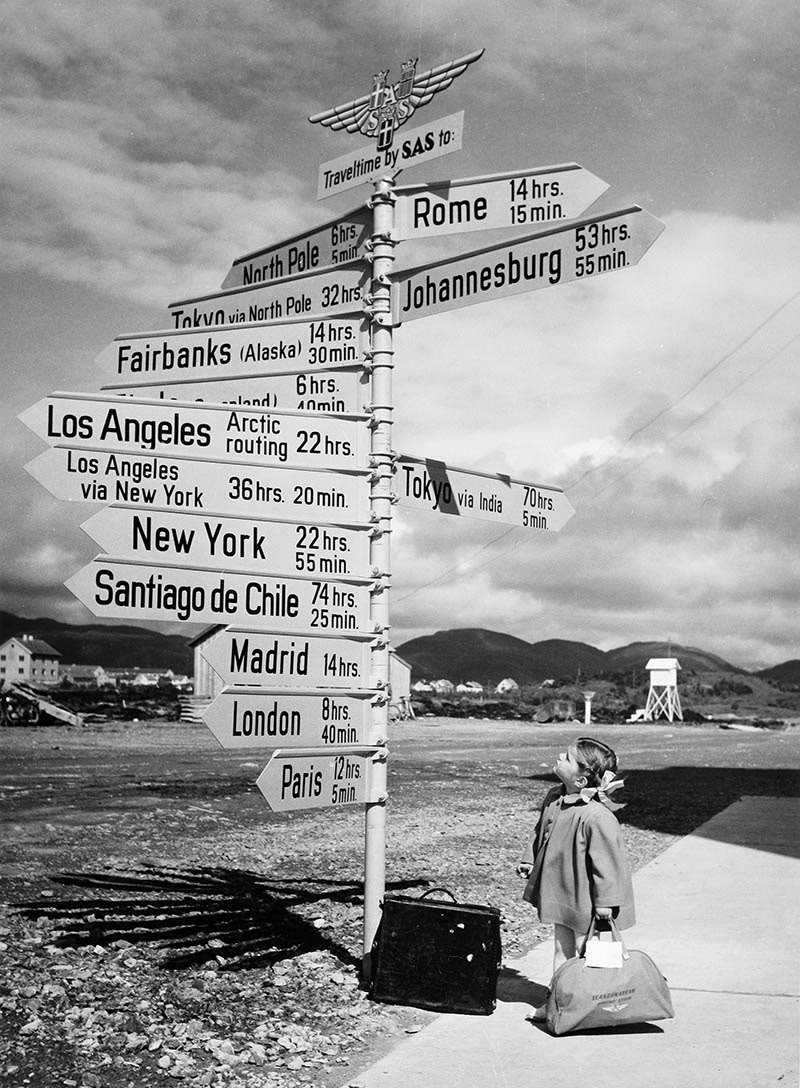 Little girl by the signpost at Bodø Airport, Norway, 1968.

Bodo is up in the northern part of Norway and the airfield was mostly improved over the years for military purposes and has just a single runway. Even today, there are very few direct flights to international destinations (all seasonal: Vienna, Munich and various summer vacation spots in Turkey & Bulgaria via charter flights) and most flights are to other airports in Norway, including Oslo where undoubtedly every destination on that sign must truly begin.

Hence NYC takes 22 hours because you will be going first to Oslo, waiting 6-8 hours there and then stopping in Newfoundland for fuel for a few more hours. Today, a direct flight from NYC to Oslo is about 7.5 hrs. Oslo to Bodo is another 1.5hrs. Factor in customs times and wait for the connecting flight, that’s going to be around 14-16 hours. 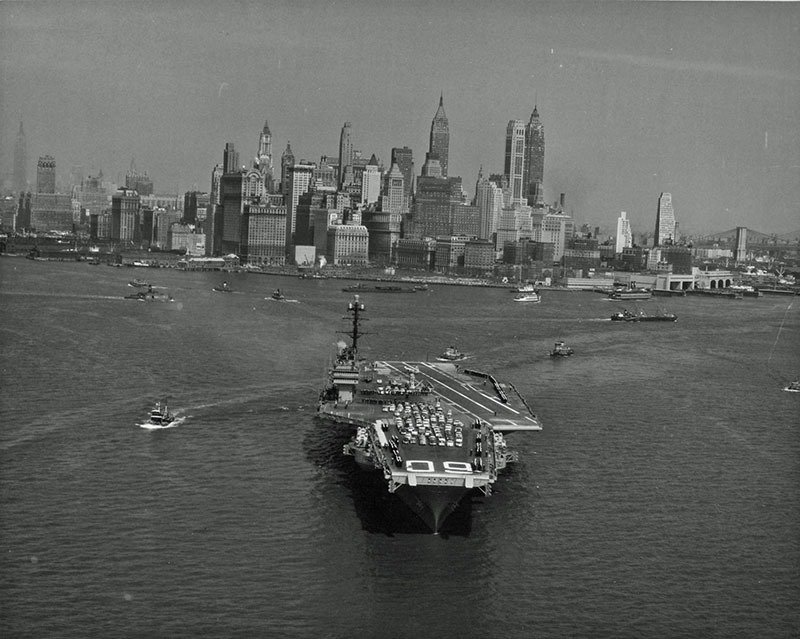 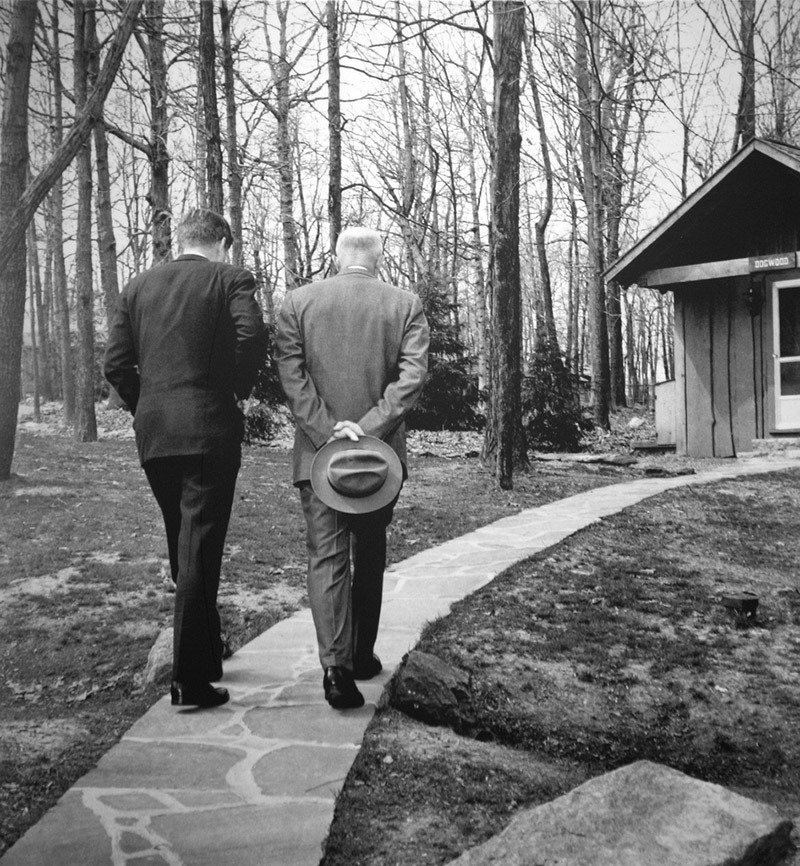 After the Bay of Pigs Invasion Kennedy Consults Eisenhower – 1962.

President John F. Kennedy and former president Dwight D. Eisenhower are having a wintertime walk at Camp David in winter. Kennedy has just asked Eisenhower what he thinks of the botched Bay of Pigs Invasion. Photographer Paul Vathis claims that immediately before the question, both men had been holding their heads high. 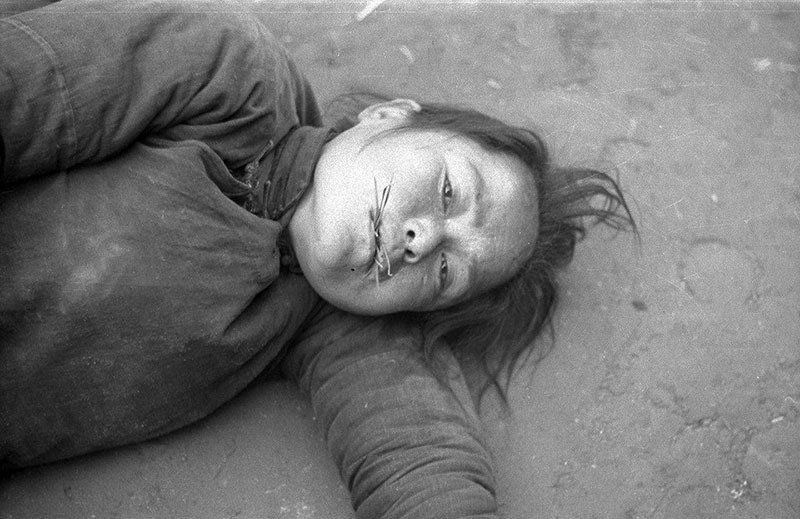 A starving Chinese woman, too weak to stand, with blades of grass protruding from her lips in a desperate attempt to find nourishment during the Henan famine occurring within the context of the Second Sino-Japanese War, November 1942. 2 to 3 million people died of starvation or disease.

The Chinese famine of 1942–43 has been referred to as ‘China’s forgotten famine’, overshadowed by the war that took place around it and the much greater famine of 1958-61. Even in Henan itself this tragic period is not well remembered or talked about, with novelist Liu Zhenyun saying that there is a ‘collective amnesia’ in the province. Interest in the event has rekindled in recent years however, with the release of the film Back to 1942, adapted from Liu Zhenyun’s novel Remembering 1942. 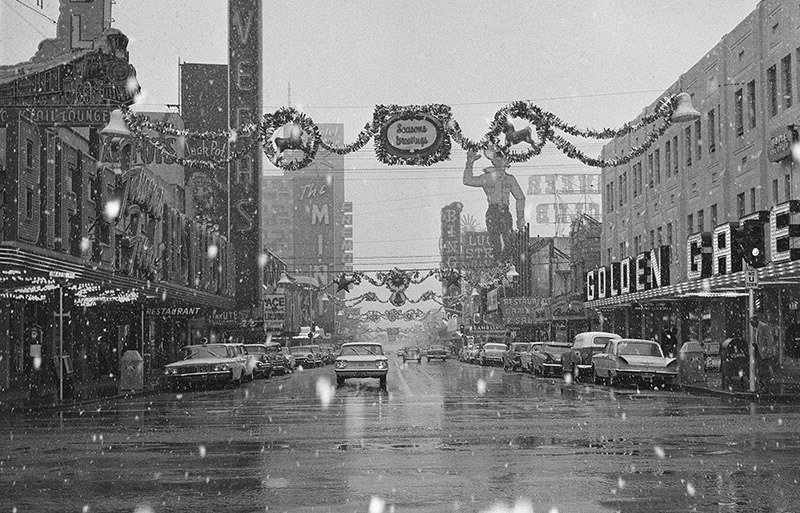 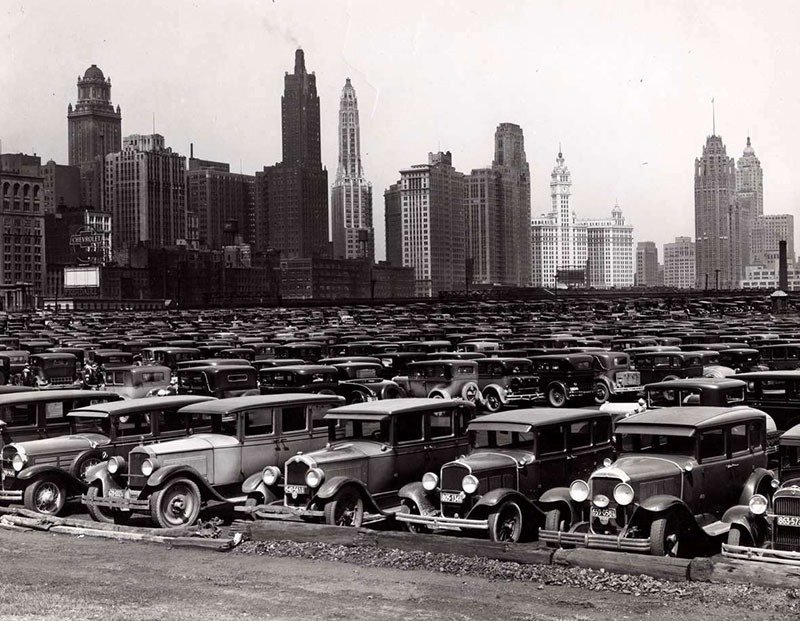 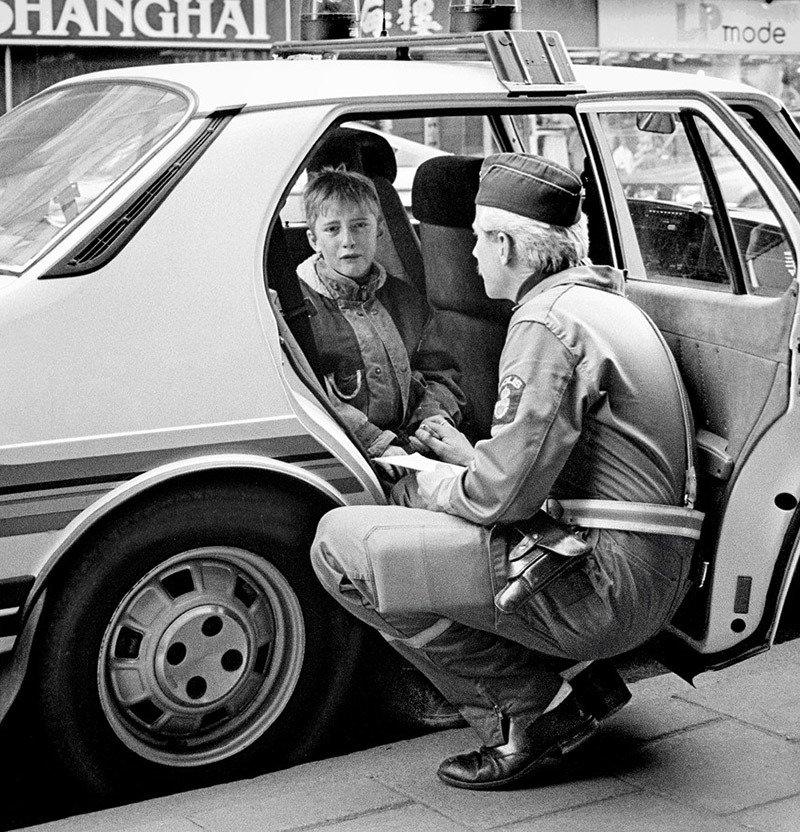 A police officer comforts a crying boy who got hit by a car when he skateboarded over a street in central Malmö, Sweden 1986.