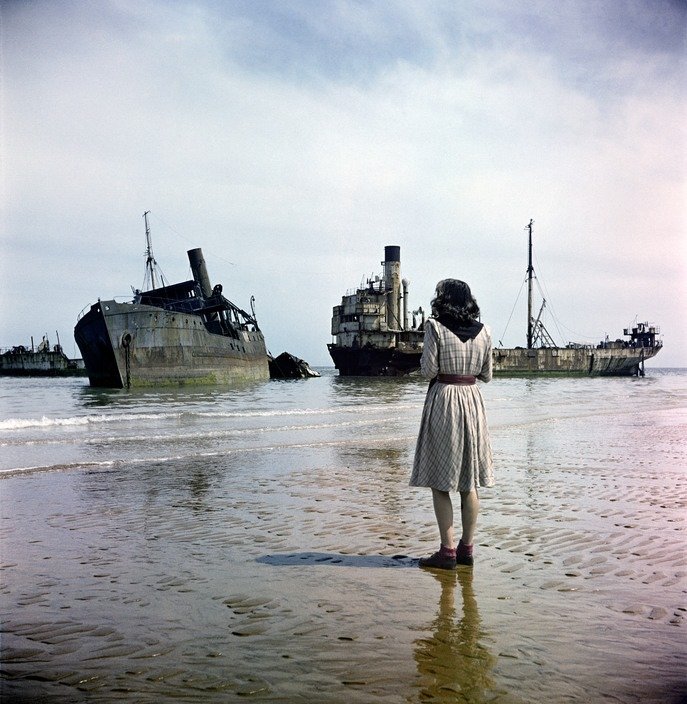 The French were hell-bent on erasing as much of the war as they could- especially evidence of the German occupation. There was a notable point of contention over the German bunkers along the Atlantic walls. Historians had to fight hard to preserve the few that remain today.

Interestingly, Pointe Du Hoc is one of the few sites in the Normandy invasion area that was left as untouched (including the bomb craters) as one could ever hope. This is because the land was transferred to the Americans to be turned into a memorial. 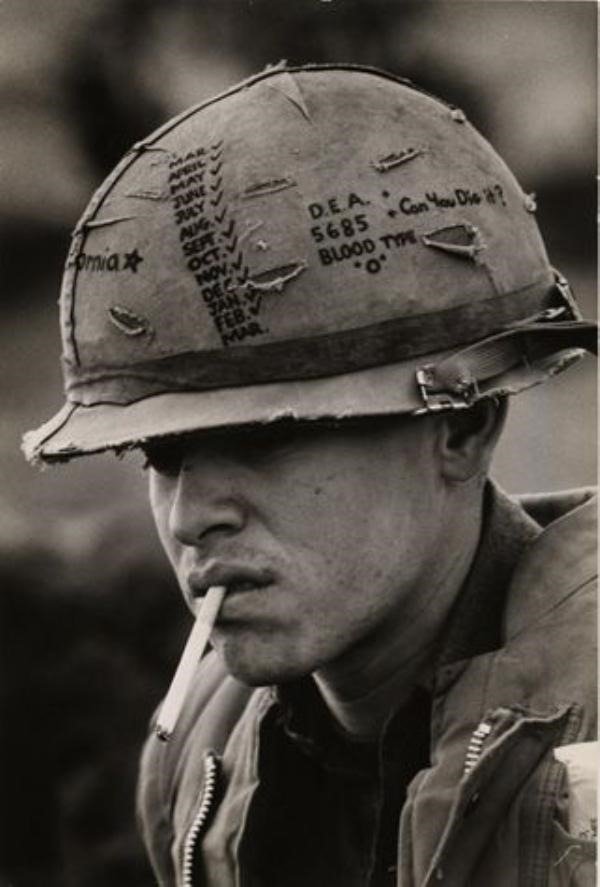 “Battle fatigue set in long ago for most the men [at Khe Sanh] … Lance Cpl. Ernest Delgado (US Marines) is from Los Angeles and has been checking the months off on his helmet. [February 1968.]”, Battle of Khe Sanh, South Vietnam by David Douglas Duncan. 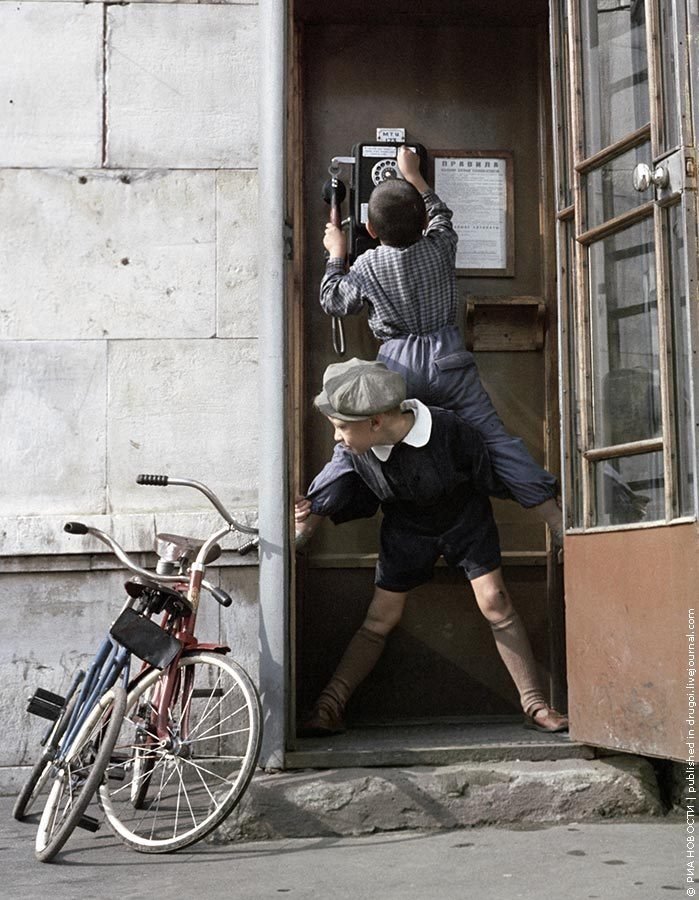 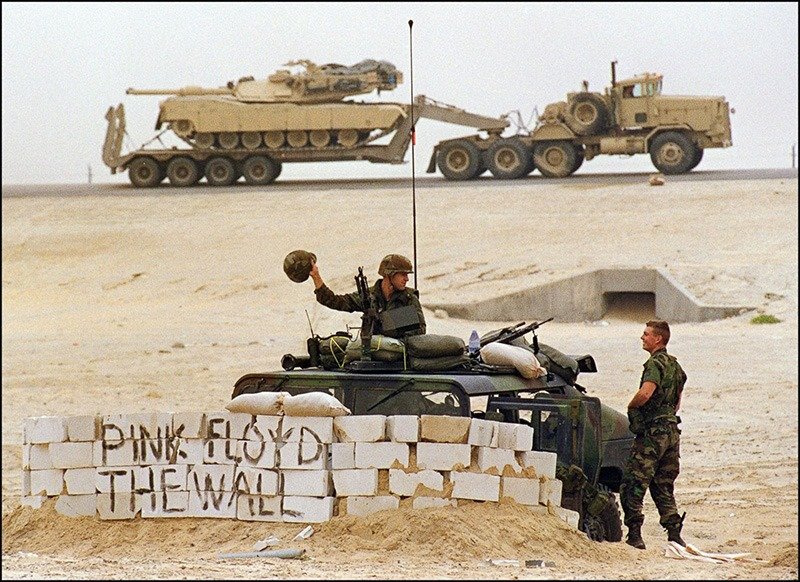 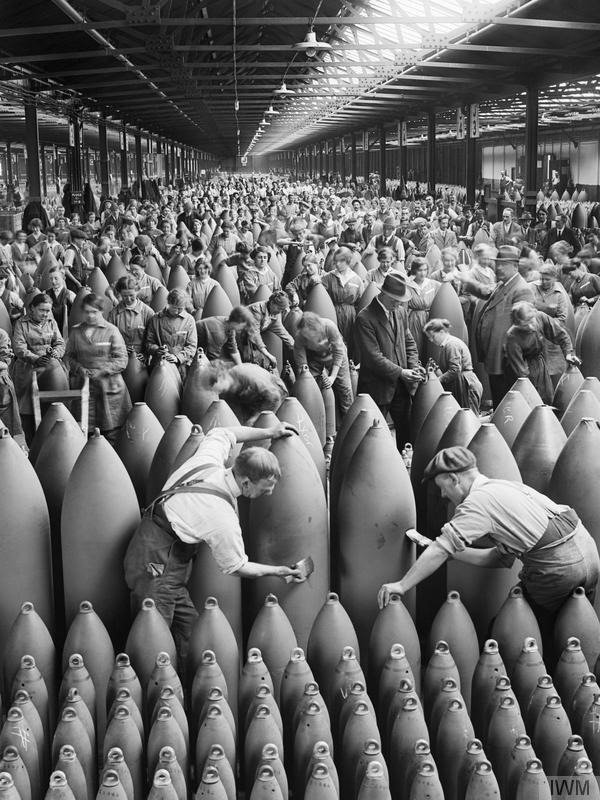 Endless line of workers getting artillery shells ready for attack at the National Shell Filling Factory at Chilwell, Nottinghamshire, UK, 1917.

There was actually a large explosion at this factory in 1918 here, 134 people died. The amazing part is that only a month later they exceeded the highest monthly run. There is nothing like wartime productivity.

What you can’t see is that ( most likely) some of the workers are bright yellow. The TNT that was used to fill these shells absorbs through the skin and, apart from being nasty, colors the skin bright yellow. Their babies were also born with yellow skin and called canary babies.

A lot of these women were looked down upon because they (women) were making more than most factory workers at the time. Men were pretty upset and took to the streets in protest. Also, prejudices seemed to be pushed away. Since women were supporting the war in such a way, they wanted the right to vote, run for parliament, etc. And they were given these rights.

It was a great time for women in this respect. They took over so many of the men’s jobs in order to not only support the war but support the country. They farmed, raised families alone and worked tirelessly. 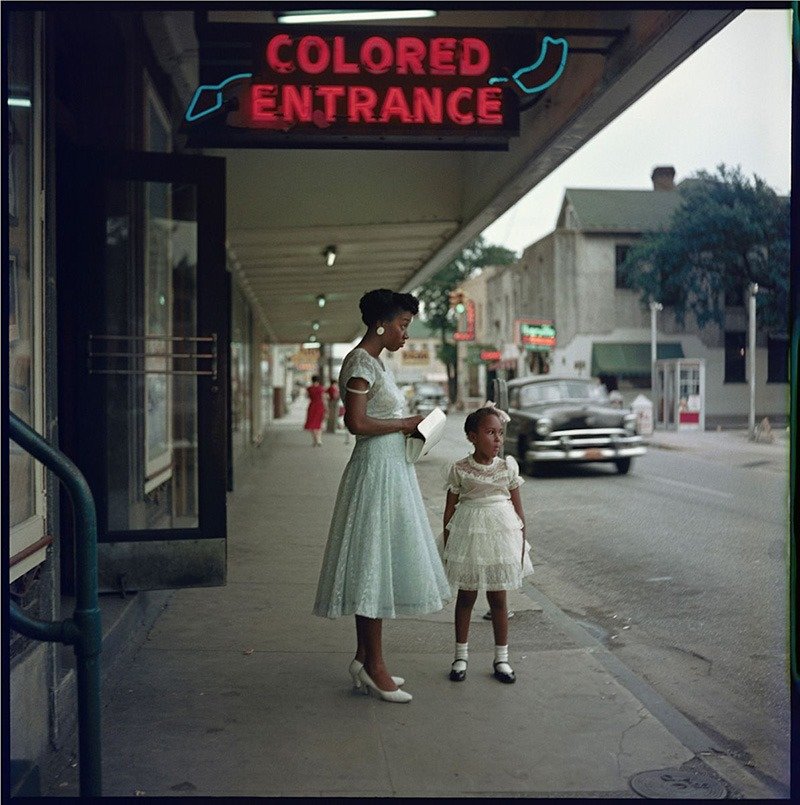 Retailers were required by law to have separate facilities. Most were more than happy to sell to anyone. The famous Montgomery Ward‎ lunch counter sit-in with Dr. Martin Luther King was only segregated in the south, they had lunch counters all over the country that were integrated. 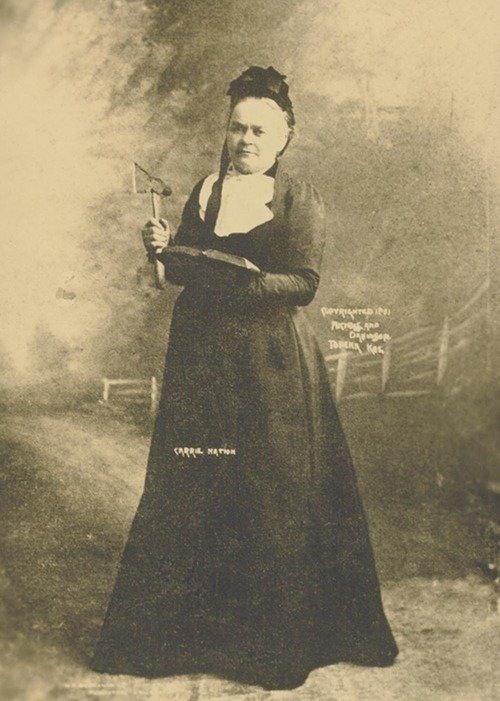 Carrie Nation, like many women of her era, believed alcohol and alcoholism contributed to nearly all the world’s problems. Rather than simply march or give speeches (which she did), Carrie took her crusade one step further and used her little hatchet there to break up saloons and bars. Literally, hacking bars, tables, doors, bottles and driving patrons away. She was arrested more than a dozen times for property damage, disturbing the peace, etc.

This radical temperance heroine had a good reason for her hatred of alcohol. Her own first husband and first love, Dr. Charles Gloyd, was a chronic alcoholic and died shortly after the birth of their only child from complications arising from his alcoholism. Carrie, she later changed the spelling to “Carry A. Nation” made an imposing figure at near 6 feet tall and dressed all in black wielding her hatchet.

In 1874, she married David Nation, nearly 20 years her senior. He worked as a minister and attorney following their short career as cotton farmers in Brazoria, Texas.

In 1900, she formed a Women’s Temperance Union in Medicine Lodge, Kansas. She began with simple protests and snide remarks and was known to greet saloon owners and bartenders with “Good morning, destroyer of men’s souls.”

On June 5, 1900 she received her ‘divine calling’ and described her revelation this way:

“The next morning I was awakened by a voice which seemed to me speaking in my heart, these words, “GO TO KIOWA,” and my hands were lifted and thrown down and the words, “I’LL STAND BY YOU.” The words, “Go to Kiowa,” were spoken in a murmuring, musical tone, low and soft, but “I’ll stand by you,” was very clear, positive and emphatic. I was impressed with a great inspiration, the interpretation was very plain, it was this: “Take something in your hands, and throw at these places in Kiowa and smash them.”

On June 7, 1900, she entered Dobson’s Saloon in Kiowa, Kansas and announced, “Men, I have come to save you from a drunkard’s fate”, and began to destroy the saloon with a cache of rocks. She attacked two other saloons in similar fashion and when Eastern Kansas was struck by a tornado shortly after, she took the tornado as a sign from above that her actions were justified.

One would think that in 1900, when women were still 2nd class citizens and the country in the grips of a fully conservative and repressed Victorian philosophy, that Mr. Nation would be upset, or at least embarrassed by his wife’s actions. After the rock smashing he joked to her that ‘maybe she should use a hatchet next time.’ to which she replied, “That’s the most sensible thing you’ve said since I married you.” The couple divorced in 1901 and Carrie and her hatchet went on to become world famous for her drastic methods to bring about prohibition. 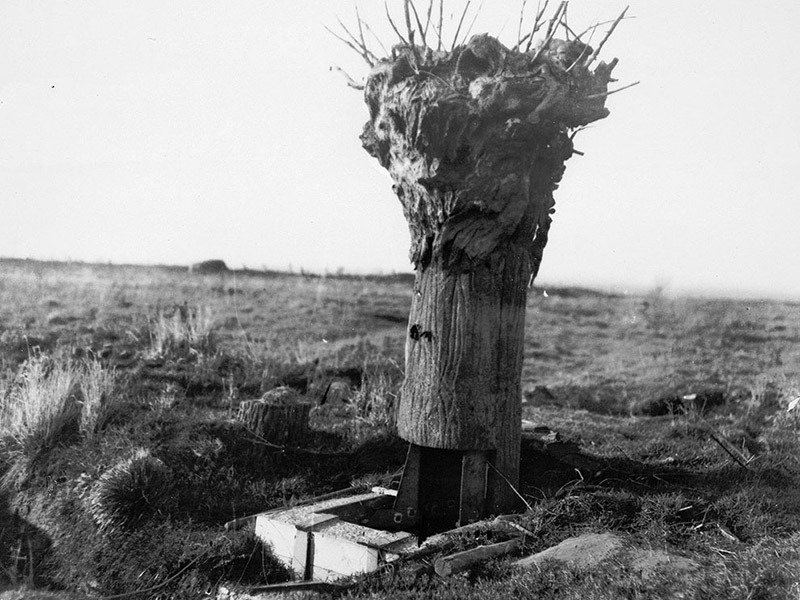 A fake tree used as an observation post during WW1, circa 1917.

These were made of iron, canvass and sheet metal. Designed to replicate the shell splintered trees that existed in No Man’s Land, these observation posts were originally constructed behind the lines. Then, once they were nearing completion, during the darkest nights engineers would cut down or remove existing trees and replace them with the false one. 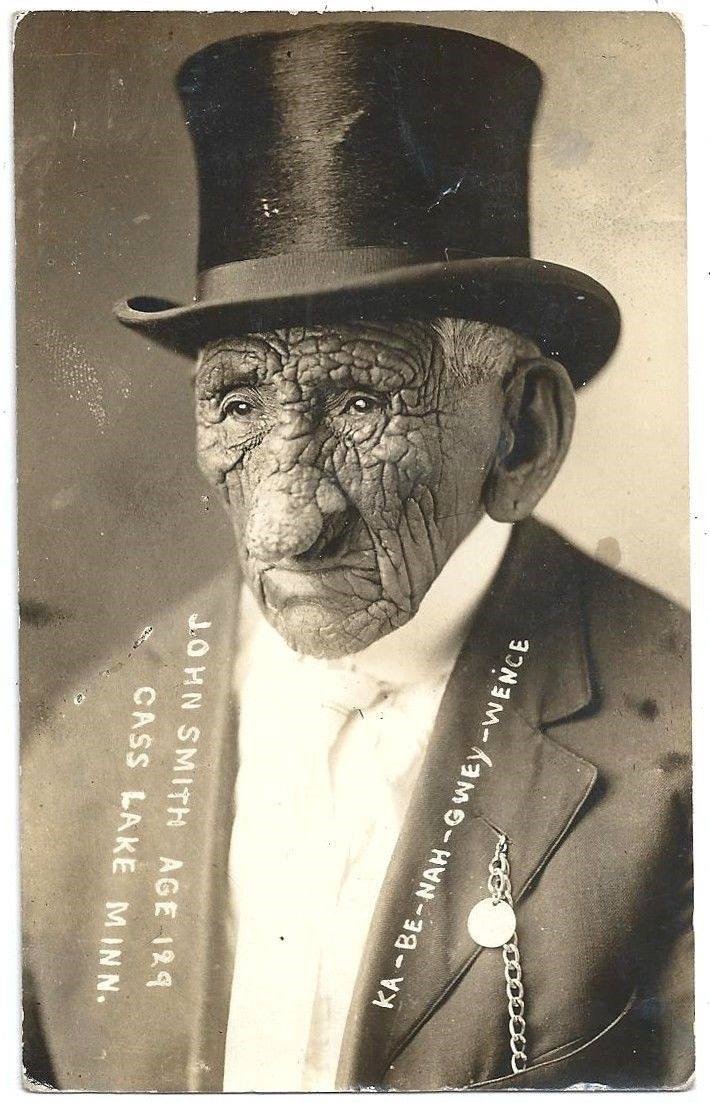 Chief John Smith-also known as Kay-bah-nung-we-way or “Old Wrinkled Meat”, 1920. He was a Chippewa Indian who lived in the Cass Lake (Minnesota) area and is reputed to have died at the age of 137. He was known as “The Old Indian” to the white people. He had eight wives and no children, but an adopted son Tom Smith.

The exact age of John Smith at the time of his death has been a subject of controversy. Federal Commissioner of Indian Enrollment Ransom J. Powell argued that “it was disease and not age that made him look the way he did” and remarked that according to records he was only 88 years old. Paul Buffalo who, when a small boy, had met John Smith, said he had repeatedly heard the old man state that he was “seven or eight”, “eight or nine” and “ten years old” when the “stars fell”. The stars falling refers to the Leonid meteor shower of November 13, 1833, about which Carl Zapffe writes: “Birthdates of Indians of the 19th Century had generally been determined by the Government in relation to the awe-inspiring shower of meteorites that burned through the American skies just before dawn on 13 November 1833, scaring the daylights out of civilized and uncivilized [sic] peoples alike. Obviously it was the end of the world…” This puts the age of John Smith at just under 100 years old at the time of his death.

There are many photos of him out there. He frequented train stations and traveled on trains (a relative said everyone always let him on for free) and boats, selling his photos for a nickle. 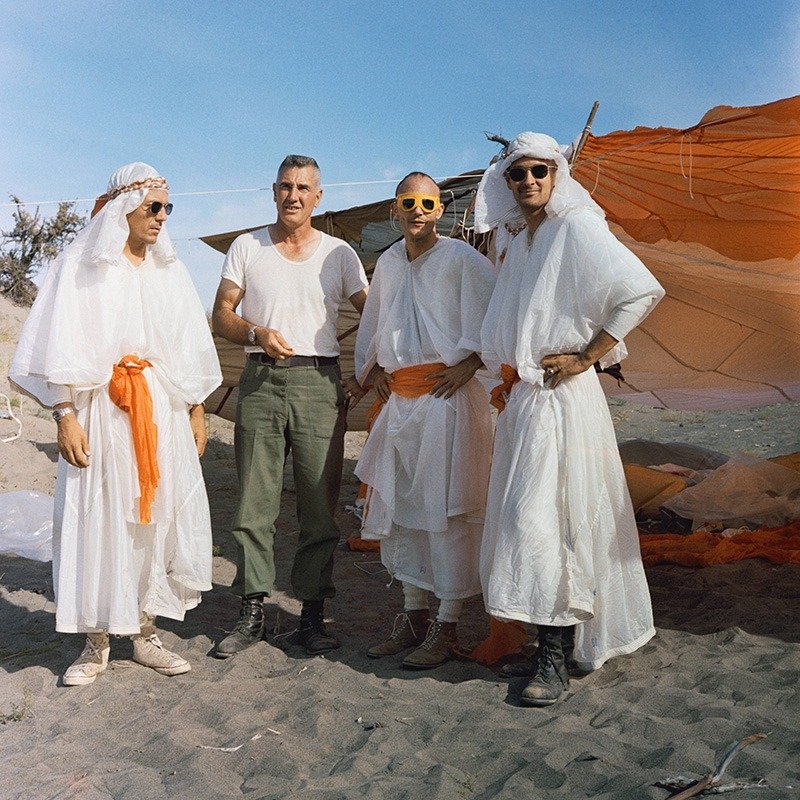 Standing from left to right are John L. Swigert, Air Force Col. Chester Bohart, Thomas Kenneth Mattingly, and Charles M. Duke, Jr. Charles Duke flew on Apollo 16, Ken Mattingly was going to fly on Apollo 13, but due to being exposed to the measles, he was replaced by John Swigert.