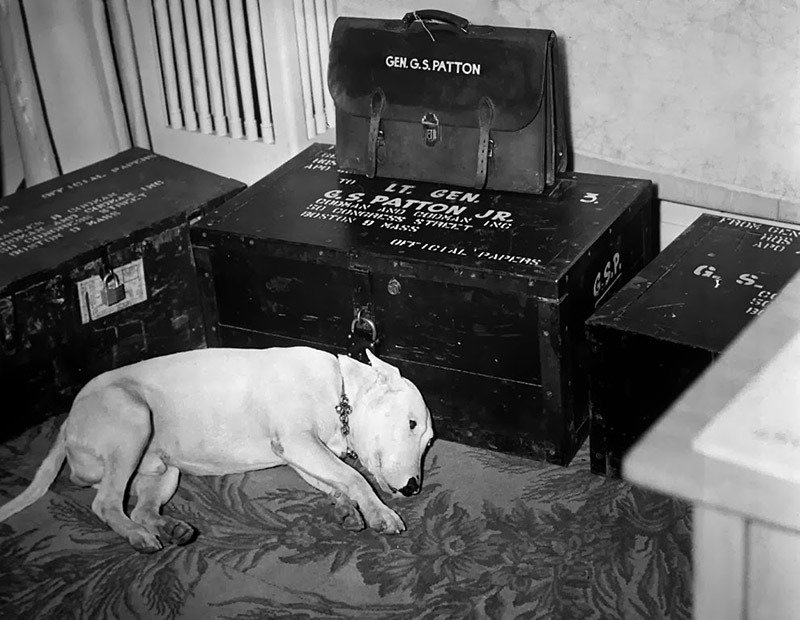 General Patton was an avid animal lover. He bought the first of many bull terriers just after World War I for his daughters, Beatrice and Ruth Ellen, and named him Tank. Although Tank turned out to be stone deaf, the girls loved him and called him by thumping on the floor. In spite of his deafness, Tank somehow always knew when Patton was arriving home and met him at the front door.

The most famous bull terrier owned by General Patton was purchased on 4 March, 1944. He was named Willie, short for “William the Conqueror.” Willie was devoted to General Patton and followed him everywhere. In the film Patton it’s implied that he called him Willie because he was actually a shy dog around other mutts instead being tough but I have no idea if that’s true.

When General Patton bought Willie, he wrote in his diary, “My bull pup … took to me like a duck to water. He is 15 months old, pure white except for a little lemin [sic] on his tail which to a cursory glance would seem to indicate that he had not used toilet paper…” Willie wore jingle bells on his collar so everyone would know when he was around and he was rumored to be a prodigious “lover.” He supposedly had his own set of “dog tags,” too. Willie could often be seen ‘at ease’ on the family beds.

Patton died as a result of a low speed car accident where he broke his neck and was paralyzed. The other occupants of the vehicle had very minor injuries. 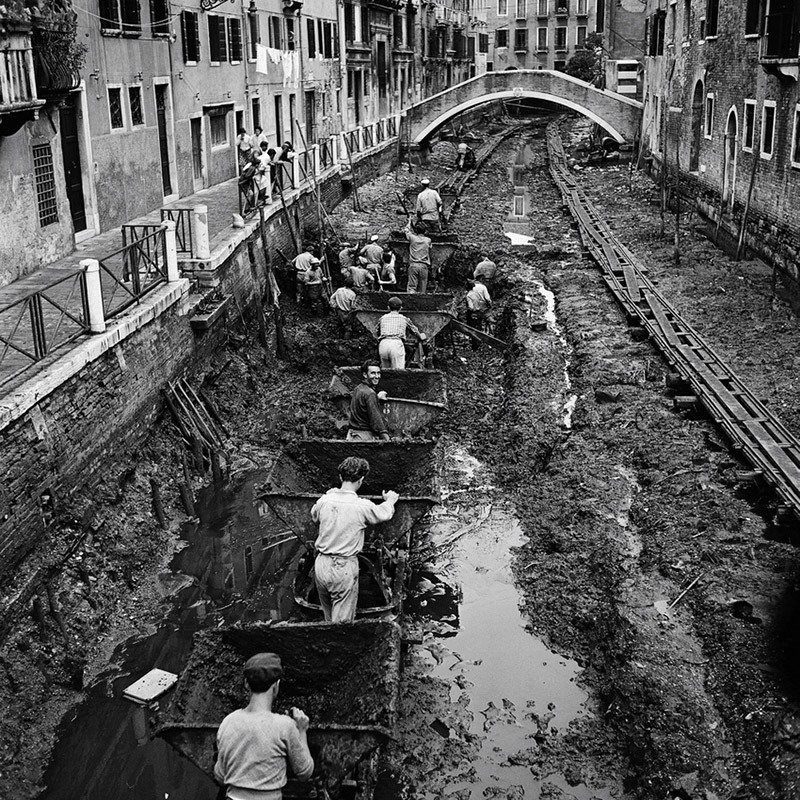 The Grand Canal being drained and cleaned – Venice, Italy (1956).

This documentary by Venice Backstage goes into some detail about why and how the canals are drained.

They do this kind of stuff often in the Netherlands. They find mostly bikes. In Amsterdam alone they fish up over 15,000 bikes from the canals each year. 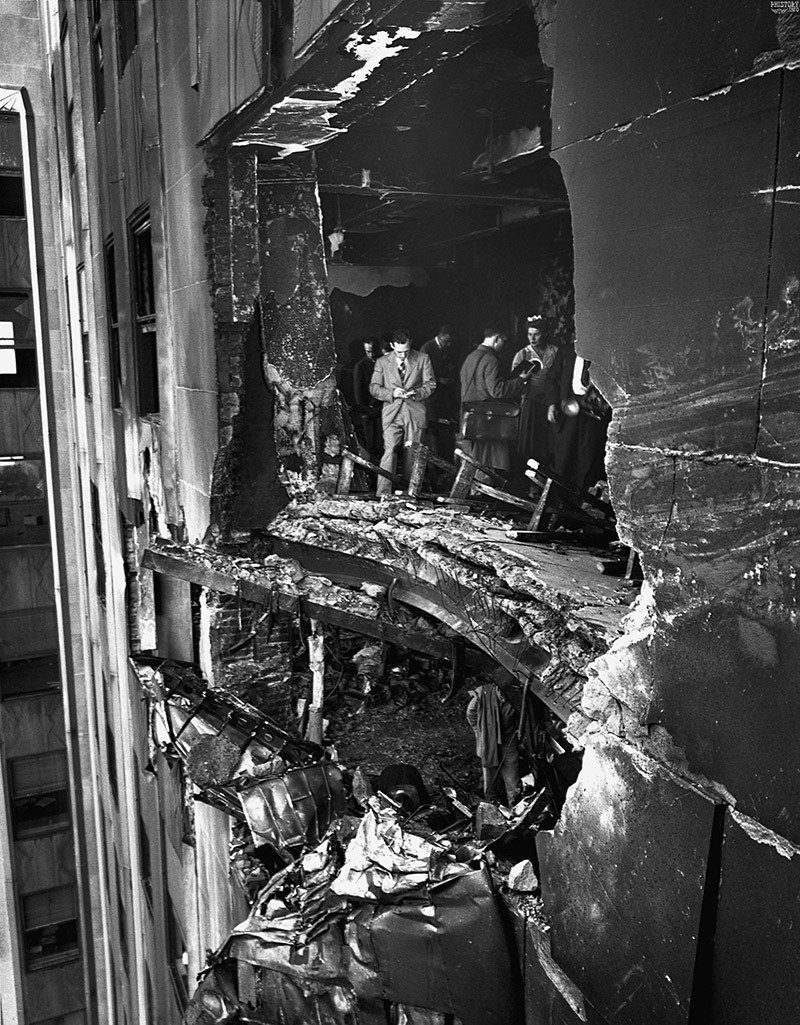 The aftermath from a B-25 bomber crashing into the Empire State Building (1945).

On Saturday, July 28, 1945, William Franklin Smith, Jr., was piloting a B-25 Mitchell bomber on a routine personnel transport mission from Bedford Army Air Field to Newark Airport. Smith asked for clearance to land, but was advised of zero visibility. Proceeding anyway, he became disoriented by the fog, and started turning right instead of left after passing the Chrysler Building.

At 9:40 a.m., the aircraft crashed into the north side of the Empire State Building, between the 78th and 80th floors, carving an 18-by-20-foot (5.5 m × 6.1 m) hole in the building where the offices of the National Catholic Welfare Council were located. One engine shot through the South side opposite the impact and flew as far as the next block, dropping 900 feet and landing on the roof of a nearby building and starting a fire that destroyed a penthouse art studio. The other engine and part of the landing gear plummeted down an elevator shaft. The resulting fire was extinguished in 40 minutes. It is still the only fire at such a height to be brought under control.

Fourteen people were killed: Smith, the two others aboard the bomber (Staff Sergeant Christopher Domitrovich and Albert Perna, a Navy aviation machinist’s friend hitching a ride), and eleven others in the building. Smith was not found until two days later after search crews found that his body had gone through an elevator shaft and fallen to the bottom. Elevator operator Betty Lou Oliver was injured. Rescuers decided to transport her on an elevator that they did not know had weakened cables. She survived a plunge of 75 stories, which still stands as the Guinness World Record for the longest survived elevator fall.

Despite the damage and loss of life, the building was open for business on many floors on the following Monday. The crash spurred the passage of the long-pending Federal Tort Claims Act of 1946, as well as the insertion of retroactive provisions into the law, allowing people to sue the government for the accident.

A missing stone in the facade served as evidence of where the aircraft crashed into the building.

In the 1960s, when the World Trade Center was being designed, this B-25 impact incident served as motivation for the designers to consider a scenario of an accidental impact of a Boeing 707 into one of the twin towers (this was prior to the 747). 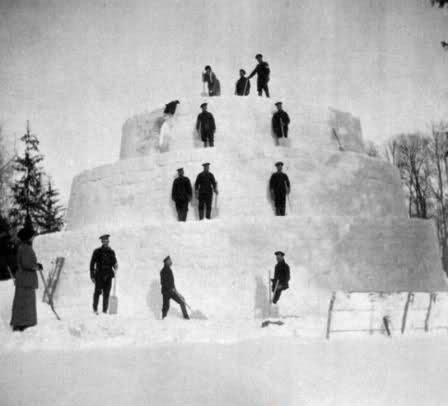 Snow fort built by the Tsar, his daughters and soldiers in Tsarskoye Selo, St. Petersburg. 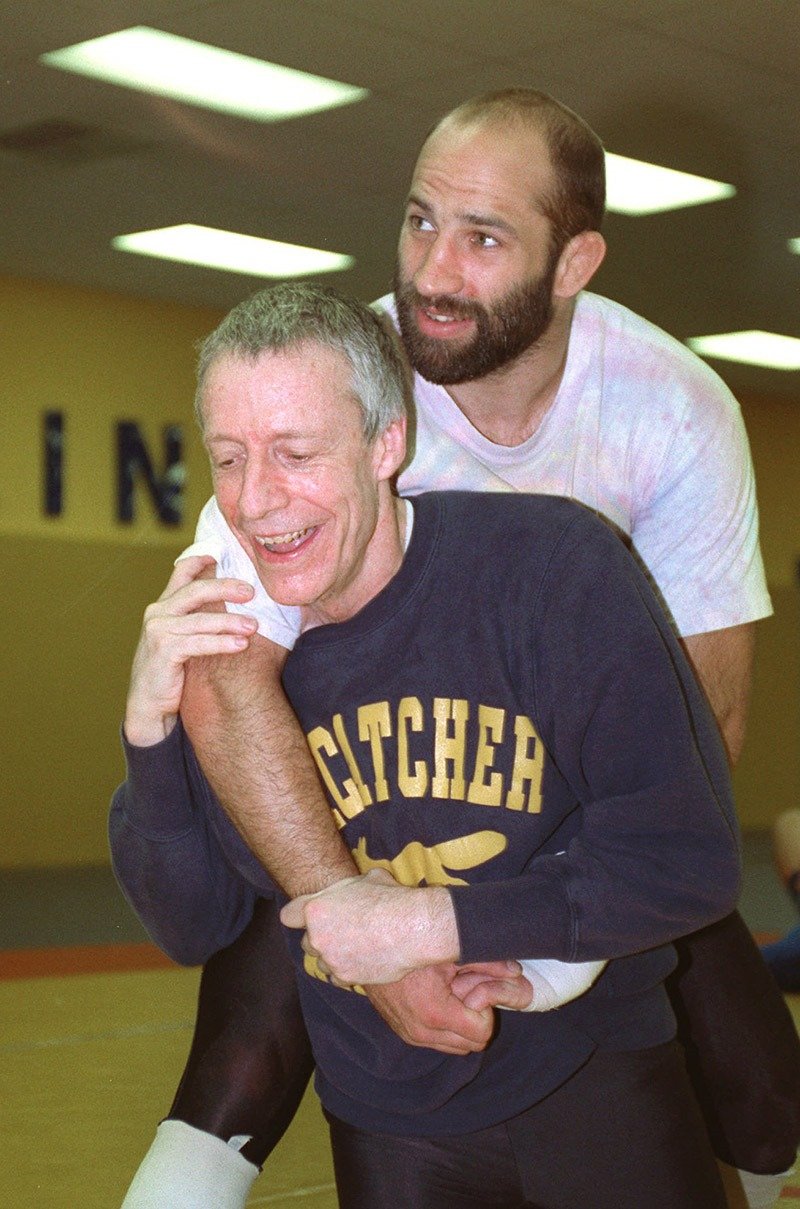 John Eleuthère du Pont (November 22, 1938 – December 9, 2010) was an American philanthropist and heir to the Du Pont family fortune who in 1996 murdered Olympic gold medal winning wrestler Dave Schultz. He was a published ornithologist, philatelist, philanthropist, conchologist, sports enthusiast, and self-styled wrestling coach. In 1972, du Pont founded and directed the Delaware Museum of Natural History and contributed to Villanova University and other institutions.

In the 1980s, he established a wrestling facility at his Foxcatcher Farm after becoming interested in the sport and the pentathlon events. He became a prominent supporter for amateur sports in the United States and a sponsor for USA Wrestling. In the 1990s, friends and acquaintances were concerned about his erratic and paranoid behavior, but his wealth shielded him. On February 25, 1997, he was convicted of murder in the third degree for the January 26, 1996, shooting death of Dave Schultz, an Olympic champion freestyle wrestler living and working on du Pont’s estate. He was ruled to have been mentally ill but not insane and was sentenced to prison for 13 to 30 years. He died in prison at age 72 on December 9, 2010. He was the only member of the Forbes 400 richest Americans ever to be convicted of murder.

Du Pont is the subject of the 2014 film Foxcatcher, in which he is portrayed by Steve Carell. 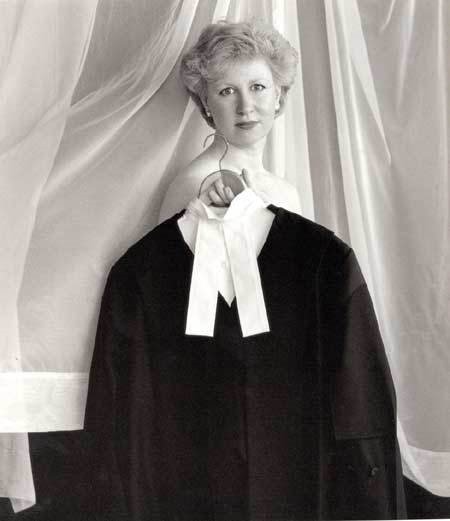 In 1990 Canada’s Minister of Justice, Kim Campbell posed for a photo bare-shouldered and holding her robes in front of herself. It caused a minor scandal, but did not stop her party from choosing her as leader in 1993, making her Canada’s first, and to date only, female prime minister.

Even though Kim Campbell was Prime Minister, her time in Parliament was too short to make her eligible for a pension. She was Prime Minister for the three or four remaining months of Brian Mulroney’s mandate. Almost all the disgust that threw her party out of office six months later was due to the unpopularity of her predecessor, Brian Mulroney. 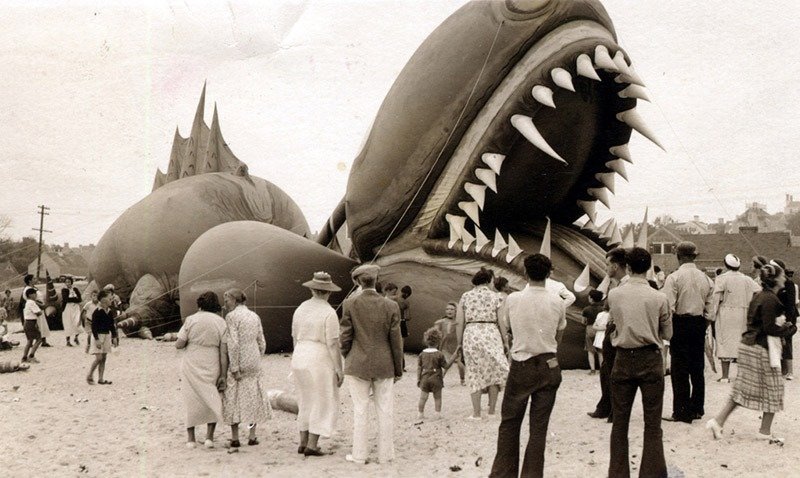 Onlookers view the beached Great Nantucket Sea Serpent. Reported sightings off the coast made national headlines, with scientists weighing in on the matter. Turns out it was a balloon designed by puppeteer Tony Sarg (of the Macy’s Thanksgiving Parade) as a publicity stunt. (1937). 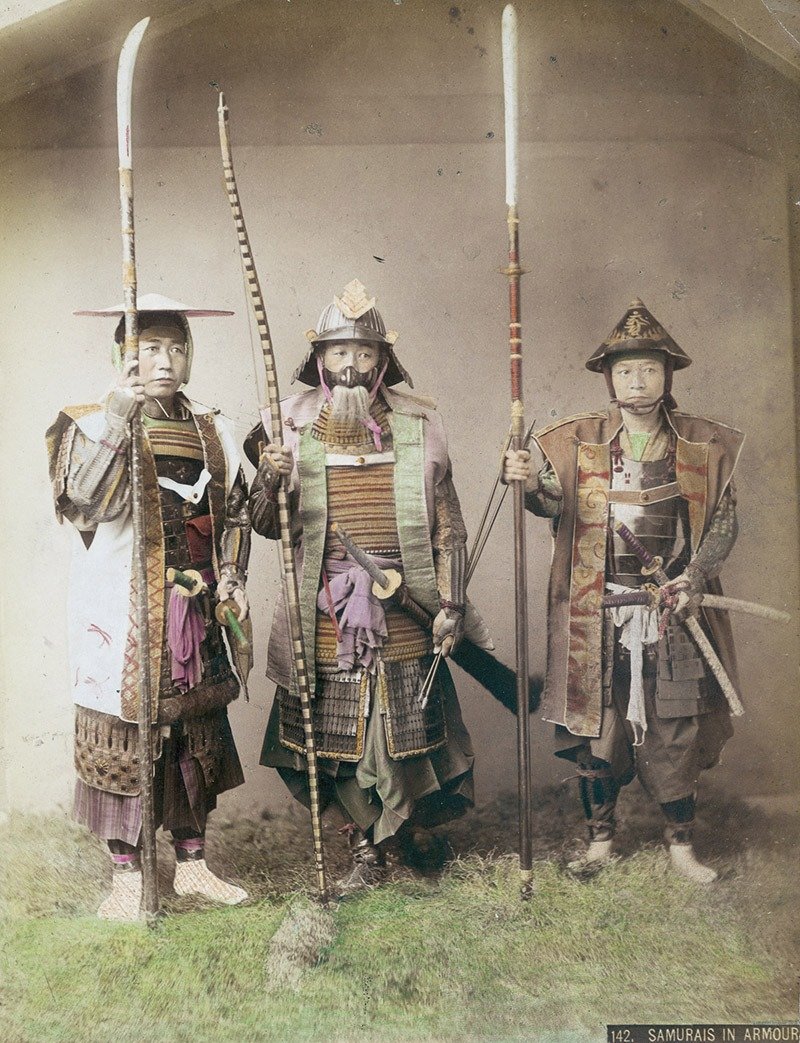 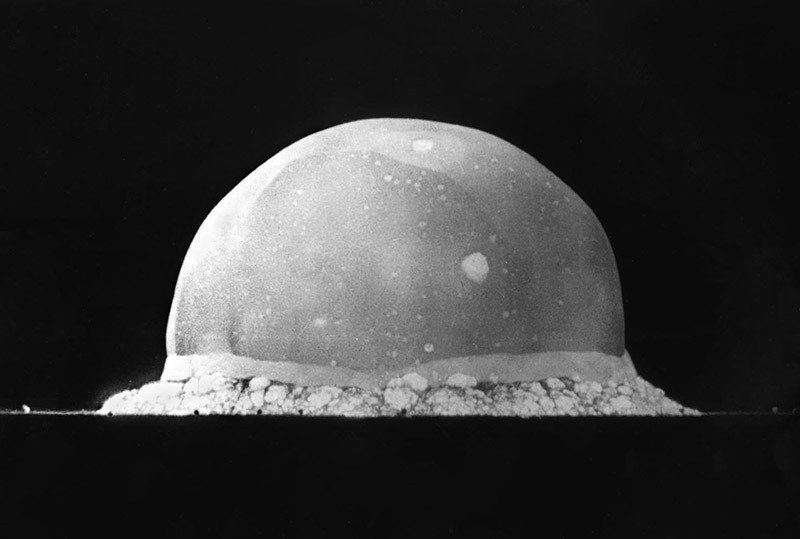 Trinity Site explosion, 0.016 seconds after detonation. This was the very first nuclear detonation in the world. (July 16, 1945).

Fastax is what the camera was called. Pretty ingenious how they made it do what it does, considering there wasn’t any chance to test it out with a nuke before testing it out on a nuke.

One thing that the tests actually have done is to contaminate all steel produced or exposed to the atmosphere after 1945 so that it can’t be used in certain sensitive instruments. As a result, certain scientific instruments depend on low-background steel, which is principally obtained from sunken pre-1945 battleships. 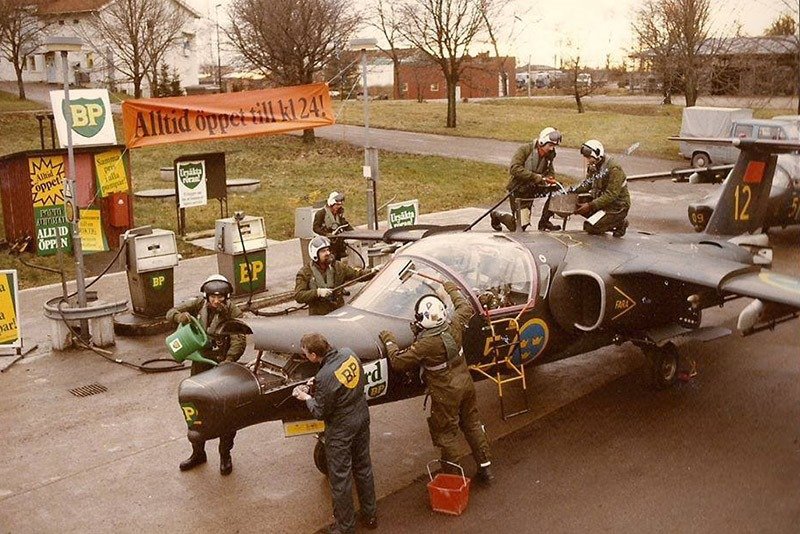 The Swedish military refuels a SAAB 105 jet in the 1980s. This is from an advertising photo shoot and not an actual ground service.