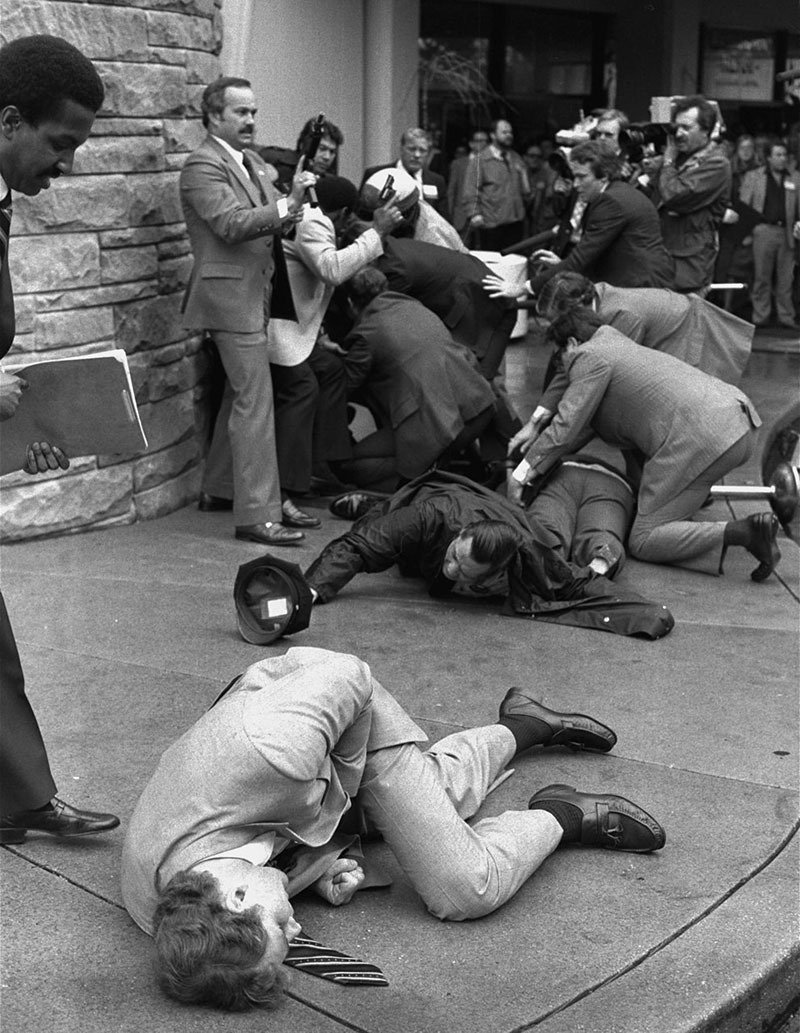 Secret Service agent Tim McCarthy clutching his stomach after being shot during the assassination attempt of President Ronald Reagan (1981).

Timothy J. “Tim” McCarthy is the current Chief of police of Orland Park, Illinois, and a former member of the United States Secret Service. During the 1981 Reagan assassination attempt, he turned into the line of fire, shielding Ronald Reagan from one of John Hinckley, Jr.’s .22 caliber bullets. Surgeons at George Washington University Hospital successfully removed the round from McCarthy’s abdomen, and he fully recovered. McCarthy is one of only four Secret Service agents to have taken a bullet for the President. He received the NCAA Award of Valor in 1982 in recognition of his bravery.

I always loved that that guy just carries a submachine gun around with him. It’s actually more awesome than just that. They didn’t carry a submachine gun around open just like that. They were carrying them concealed in briefcases for situations just like that. In this photo you can see the container in which it was stored. They gain access to the gun by pressing a trigger on the briefcase handle.

The guy lying on his stomach behind the police office is White House Secretary Jim Brady. He was hit in the head with one of the bullets and permanently disabled. He died in 2014, and the District of Columbia Medical Examiner ruled the death a homicide saying that he died from wounds directly caused by the Hinckley assassination attempt 33 years earlier. 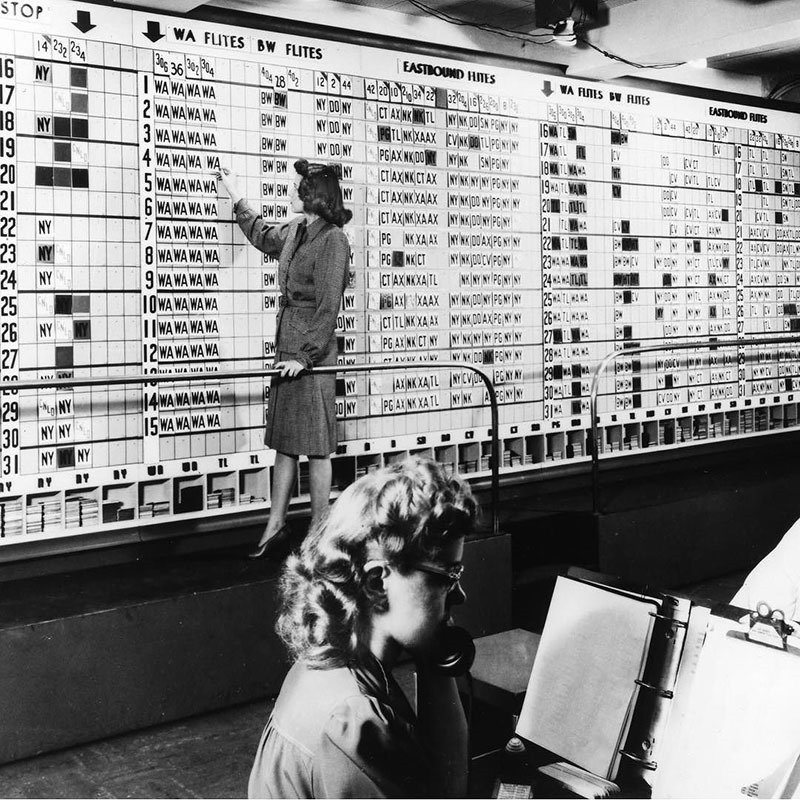 Back before computers, airlines took reservations manually. Centered around a large board that displayed the next thirty days of flights, employees would receive calls for reservations, write down passenger’s information, and then assign them seats on their chosen flights. Modern reservation systems developed with the evolution of computers. Shortly after World War II, American Airlines introduced the first automated reservation system, the Reservisor. Here’s a picture of that system in action. 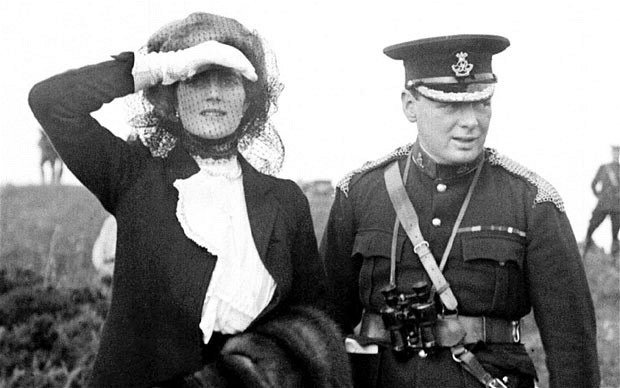 Winston Churchill and his wife Clementine, during a visit to Aldershot, Hampshire, for army maneuvers, 1910. 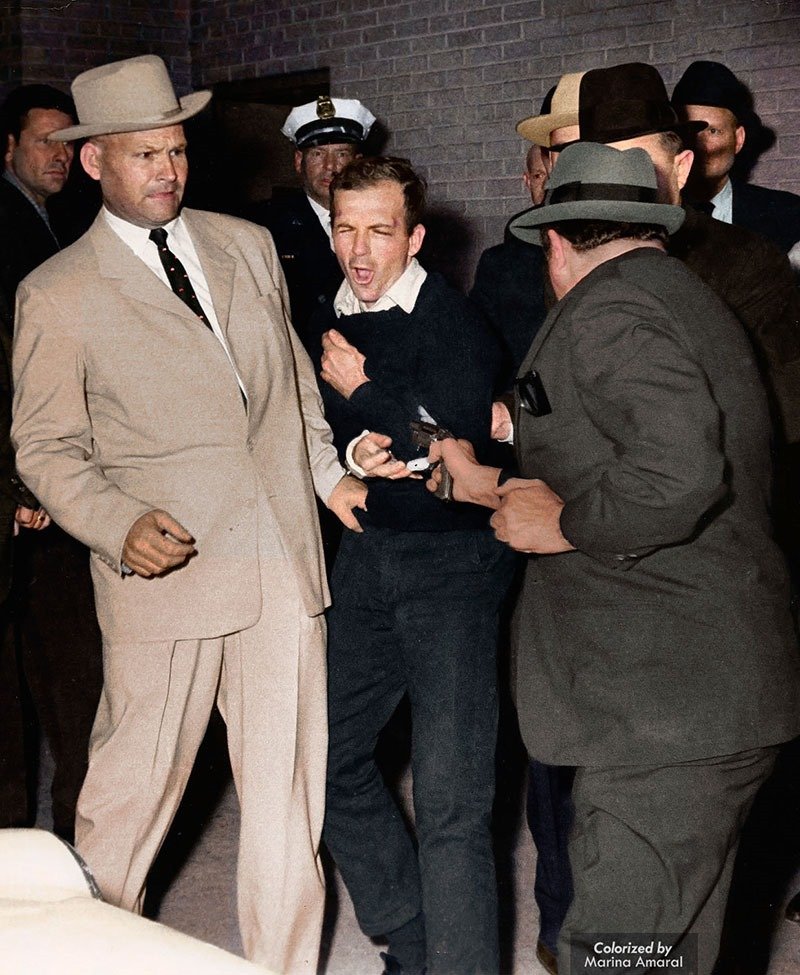 At 12:20 p.m. on November 24, 1963, in the basement of the Dallas police station, Lee Harvey Oswald, the alleged assassin of President John F. Kennedy, is shot to death by Jack Ruby, a Dallas nightclub owner.

Ruby’s bullet entered Oswald’s left side in the front part of the abdomen and caused damage to his spleen, stomach, aorta, vena cava, kidney, liver, diaphragm, and eleventh rib before coming to rest on his right side.

On November 22, President Kennedy was fatally shot while riding in an open-car motorcade through the streets of downtown Dallas. Less than an hour after the shooting, Lee Harvey Oswald killed a policeman who questioned him on the street. Thirty minutes after that, he was arrested in a movie theater by police. Oswald was formally arraigned on November 23 for the murders of President Kennedy and Officer J.D. Tippit. On November 24, Oswald was brought to the basement of the Dallas police headquarters on his way to a more secure county jail. A crowd of police and press with live television cameras rolling gathered to witness his departure. As Oswald came into the room, Jack Ruby emerged from the crowd and fatally wounded him with a single shot from a concealed .38 revolver. Ruby, who was immediately detained, claimed that rage at Kennedy’s murder was the motive for his action. Some called him a hero, but he was nonetheless charged with first-degree murder.

Jack Ruby, originally known as Jacob Rubenstein, operated strip joints and dance halls in Dallas and had minor connections to organized crime. He also had a relationship with a number of Dallas policemen, which amounted to various favors in exchange for leniency in their monitoring of his establishments. He features prominently in Kennedy-assassination theories, and many believe he killed Oswald to keep him from revealing a larger conspiracy. In his trial, Ruby denied the allegation and pleaded innocent on the grounds that his great grief over Kennedy’s murder had caused him to suffer “psychomotor epilepsy” and shoot Oswald unconsciously. The jury found him guilty of the “murder with malice” of Oswald and sentenced him to die. In October 1966, the Texas Court of Appeals reversed the decision on the grounds of improper admission of testimony and the fact that Ruby could not have received a fair trial in Dallas at the time. In January 1967, while awaiting a new trial, to be held in Wichita Falls, Ruby died of lung cancer in a Dallas hospital.

The official Warren Commission report of 1964 concluded that neither Oswald nor Ruby were part of a larger conspiracy, either domestic or international, to assassinate President Kennedy. Despite its seemingly firm conclusions, the report failed to silence conspiracy theories surrounding the event, and in 1978 the House Select Committee on Assassinations concluded in a preliminary report that Kennedy was “probably assassinated as a result of a conspiracy” that may have involved multiple shooters and organized crime. The committee’s findings, as with those of the Warren Commission, continue to be widely disputed. 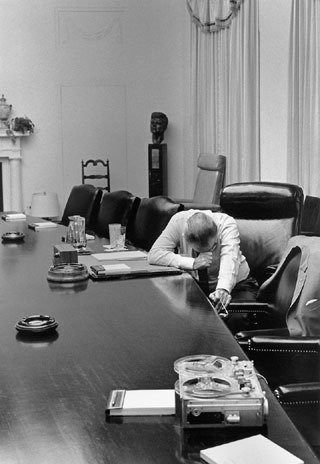 Lyndon B. Johnson cries as he listens to his son-in-law describe conditions in Vietnam. (1968).

His son in law, captain Chuck Robb, would go on to be senator. Here he is in Vietnam (middle). 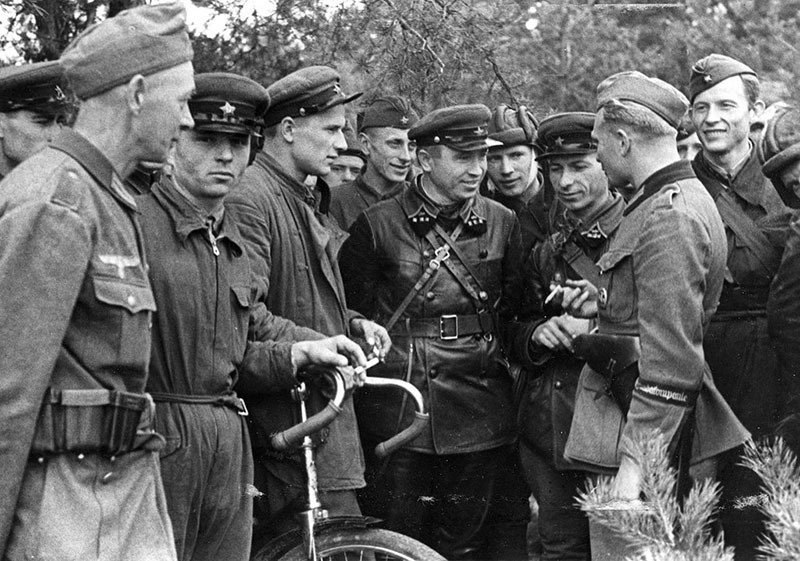 Soviet and Nazi soldiers talking after the successful invasion of Poland, September 1939.

Even though water barriers separated most of the spheres of interest, the Soviet and German troops met on numerous occasions. The most remarkable event of this kind occurred at Brest-Litovsk on 22 September. The German 19th Panzer Corps—commanded by General Heinz Guderian—had occupied the city, which lay within the Soviet sphere of interest. When the Soviet 29th Tank Brigade—commander by S. M. Krivoshein—approached, the commanders negotiated that the German troops would withdraw and the Soviet troops would enter the city saluting each other. At Brest-Litovsk, Soviet and German commanders held a joint victory parade before German forces withdrew westward behind a new demarcation line. 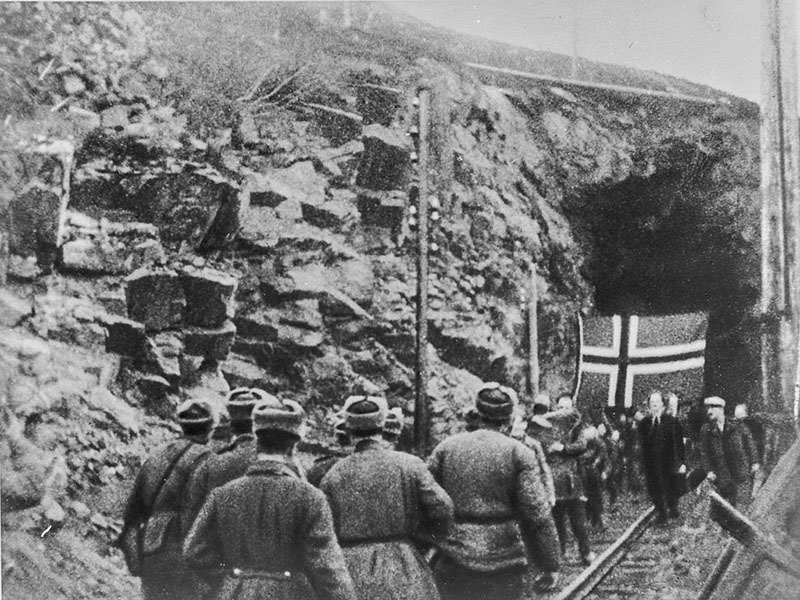 Soviets meet Norwegians who were hiding from the German military. They sheltered in a mine in Finnmark, 1945.

The Germans burned and destroyed everything on the retreat from Finnmark, to delay Soviet pursuit. Residents who did not want to be deported had to hide. The German Army burned down every house, school and church; killed all farm animals and sunk all boats in that part of the country. They performed mass deportations of teachers and priests, deported jews, and did revenge mass killings of whole villages. They also deliberately starved the whole population by shipping all fish caught to Germany. 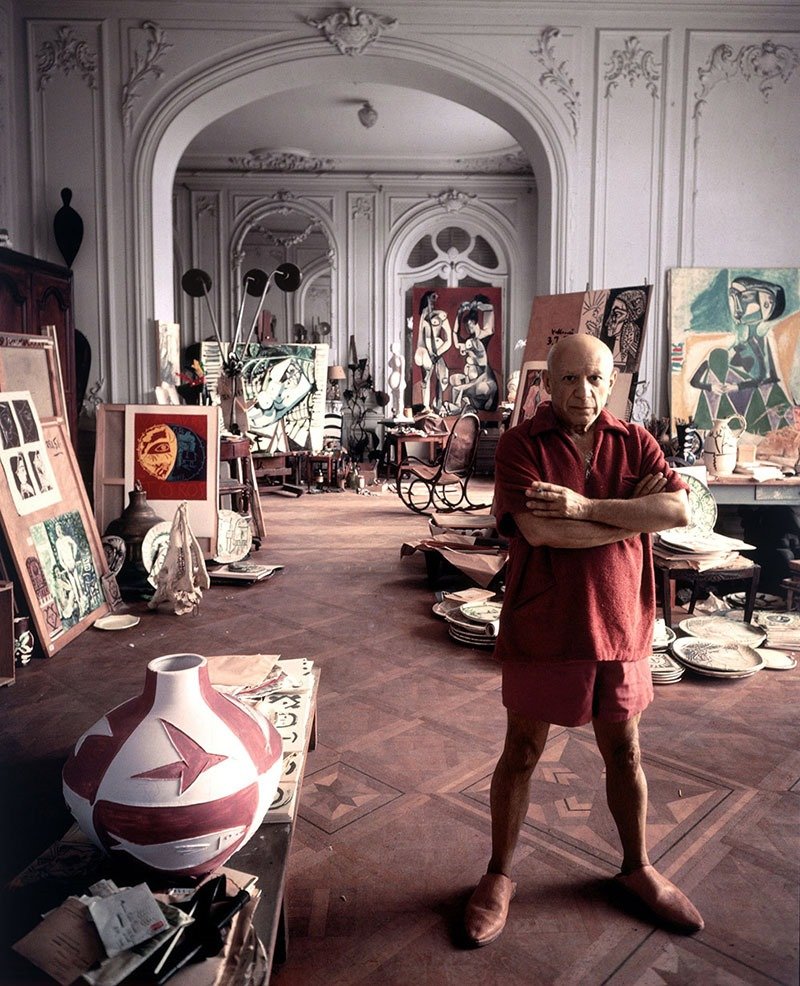 Pablo Picasso at his home studio in France, 1956. 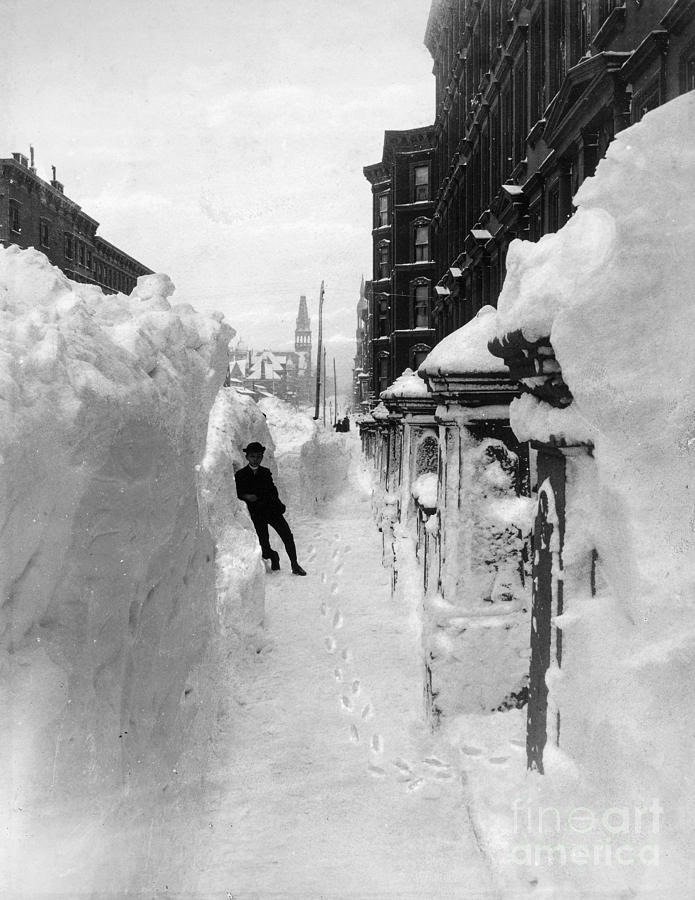 On this day in 1888, one of the worst blizzards in American history strikes the Northeast, killing more than 400 people and dumping as much as 55 inches of snow in some areas. New York City ground to a near halt in the face of massive snow drifts and powerful winds from the storm. At the time, approximately one in every four Americans lived in the area between Washington D.C. and Maine, the area affected by the Great Blizzard of 1888.

On March 10, temperatures in the Northeast hovered in the mid -50s. But on March 11, cold Arctic air from Canada collided with Gulf air from the south and temperatures plunged. Rain turned to snow and winds reached hurricane-strength levels. By midnight on March 11, gusts were recorded at 85 miles per hour in New York City. Along with heavy snow, there was a complete whiteout in the city when the residents awoke the next morning.

Despite drifts that reached the second story of some buildings, many city residents trudged out to New York’s elevated trains to go to work, only to find many of them blocked by snow drifts and unable to move. Up to 15,000 people were stranded on the elevated trains; in many areas, enterprising people with ladders offered to rescue the passengers for a small fee. In addition to the trains, telegraph lines, water mains and gas lines were also located above ground. Each was no match for the powerful blizzard, freezing and then becoming inaccessible to repair crews. Simply walking the streets was perilous. In fact, only 30 people out of 1,000 were able to make it to the New York Stock Exchange for work; Wall Street was forced to close for three straight days. There were also several instances of people collapsing in snow drifts and dying, including Senator Roscoe Conkling, New York’s Republican Party leader.

Many New Yorkers camped out in hotel lobbies waiting for the worst of the blizzard to pass. Mark Twain was in New York at the time and was stranded at his hotel for several days. P.T. Barnum entertained some of the stranded at Madison Square Garden. The East River, running between Manhattan and Queens, froze over, an extremely rare occurrence. This inspired some brave souls to cross the river on foot, which proved a terrible mistake when the tides changed and broke up the ice, stranding the adventurers on ice floes. Overall, about 200 people were killed by the blizzard in New York City alone.

But New York was not the only area to suffer. Along the Atlantic coast, hundreds of boats were sunk in the high winds and heavy waves. The snowfall totals north of New York City were historic: Keene, New Hampshire, received 36 inches; New Haven, Connecticut, got 45 inches; and Troy, New York, was hit by 55 inches of snow over 3 days. In addition, thousands of wild and farm animals froze to death in the blizzard.

In the wake of the storm, officials realized the dangers of above-ground telegraph, water and gas lines and moved them below ground. In New York City, a similar determination was made about the trains, and within 10 years, construction began on an underground subway system that is still in use today. 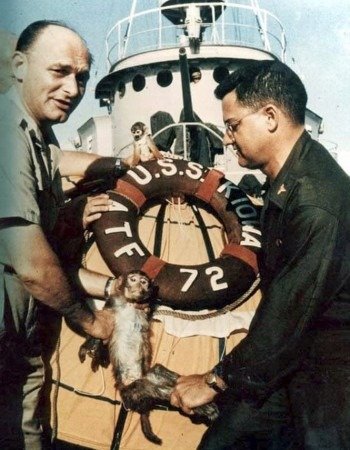 The USS Kiowa recovers Able & Baker, the first primates to go into space and return alive (1959). The first animals were some fruit flies that were sent up with a V-2 in 1947. The flies lived.

The Soviets had sent a number of dogs into space by this point, some of whom made it back alive, including the humorously named ZIB (a russian acronym for “Replacement for missing dog Bobik”). Bobik ran away and ZIB was a stray they rounded up at the last minute.

For those wondering, the USS Kiowa was Navy tugboat veteran of the invasion of Normandy based at the time out of Puerto Rico, the recovery was off Antigua and she was ultimately sold for scrap in 1994.