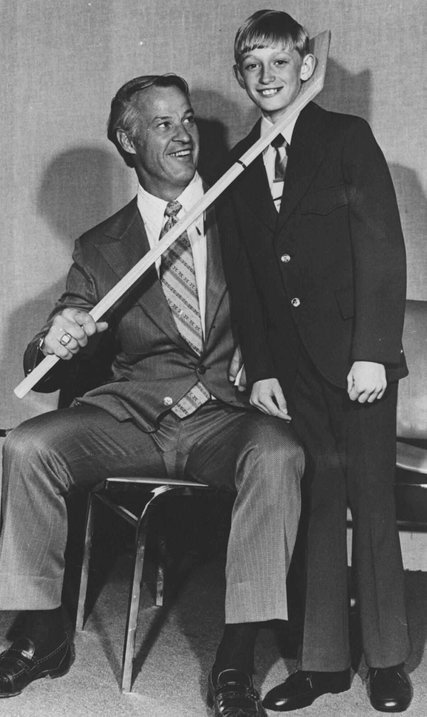 Gordie Howe with a young Wayne Gretzky in 1972.

I got to post this image from years later to go with it. Here’s a picture of Geordie in his prime fishing with his shirt off.

Wayne was a child prodigy, playing in leagues with kids several years older than him. 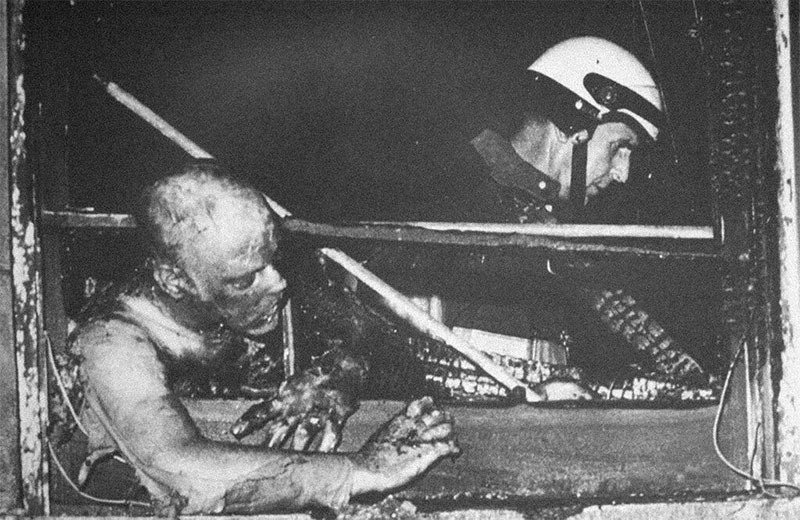 The body of Rev. Bill Larson clings to a window of the UpStairs Lounge, a New Orleans gay bar set on fire killing 32 people on the last day of Pride Weekend in 1973. Burial services for the dead were denied by most churches, and families refused to claim victims’ bodies out of shame.

On Sunday, June 24, 1973, the final day of Pride Weekend, members of the Metropolitan Community Church, a pro-LGBT Protestant denomination, held services inside the club, located on the second floor of a three-story building. The MCC was the United States’ first gay church, founded in Los Angeles in 1968. After the service, the club hosted free beer and dinner for 125 patrons. At the time of the evening fire, some 60 people were listening to pianist David Gary perform and discussing an upcoming MCC fundraiser for the local Crippled Children’s Hospital.

At 7:56 p.m., a buzzer from downstairs sounded, and bartender Buddy Rasmussen, an Air Force veteran, asked Luther Boggs to answer the door, anticipating a taxi cab driver. Boggs opened the door to find the front staircase engulfed in flames, along with the smell of lighter fluid. Rasmussen immediately led some thirty patrons out of the back exit to the roof, where the group could access a neighboring building’s roof and climb down to the ground floor. Some thirty others were accidentally locked inside the second-floor club, some attempting to escape by squeezing through barred windows. One man managed to squeeze through the 14-inch gap, only to fall to his death while burning. Reverend Bill Larson of the MCC clung to the bars of one window until he died, and his charred remains were visible to onlookers for hours afterwards. MCC assistant pastor George “Mitch” Mitchell managed to escape, but then returned to attempt to rescue his boyfriend, Louis Broussard. Both died in the fire, their remains showing them clinging to each other

Firefighters stationed two blocks away found themselves blocked by cars and pedestrian traffic. One fire truck tried to maneuver on the sidewalk but crashed into a taxi. They arrived to find bar patrons struggling against the security bars and quickly brought the fire under control. Twenty-eight people died at the scene of the sixteen-minute fire, and one died en route to the hospital. Another 18 suffered injuries, of whom three, including Boggs, died. 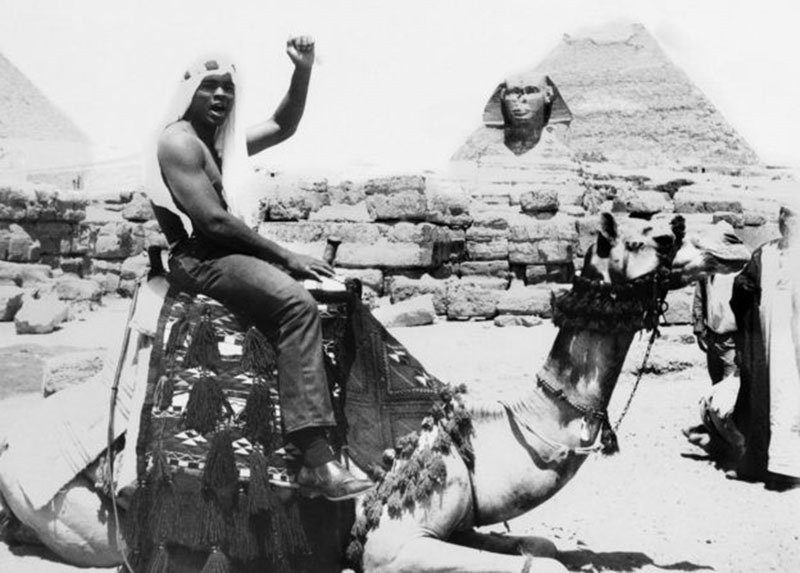 Muhammad Ali sitting on a camel and giving the black power salute during a visit to Egypt in 1964. 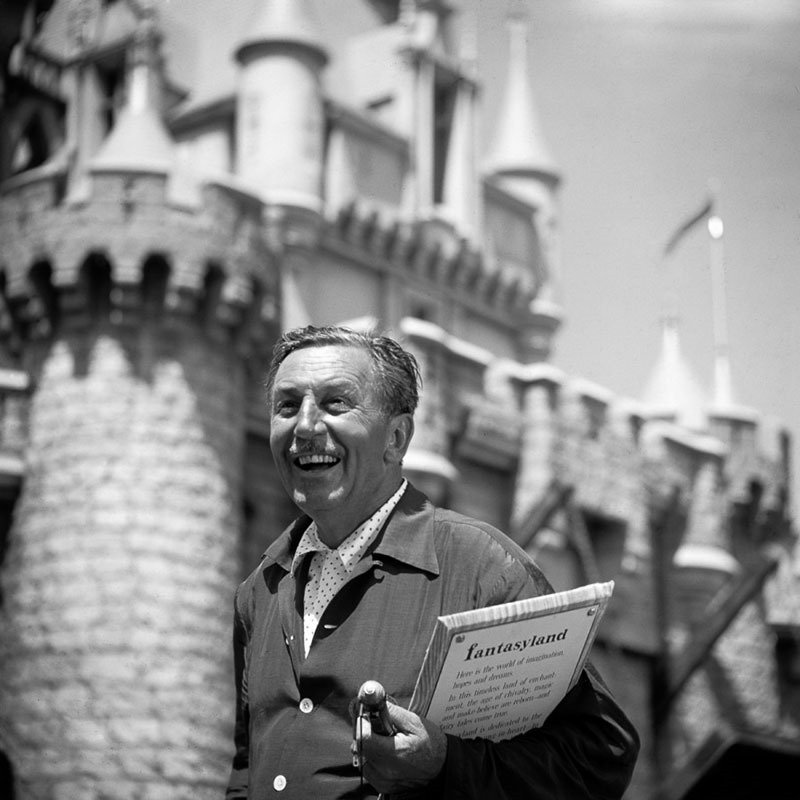 Walt Disney on the first ever Disneyland Opening day, July 17, 1955.

To the disappointment of many children, some of the park’s attractions weren’t ready to operate on opening day. The Rocket to the Moon, Peter Pan and Dumbo the Flying Elephant rides were all closed. Visitors to the unfinished Tomorrowland, which was to depict life in 1986 when a trip to the moon would be an everyday occurrence, remained stuck in 1955.

The rush to finish construction also caused other problems. So many weeds sprouted along the banks of the Canal Boats of the World ride that Disney ordered workers to place signs with exotic species names in Latin next to them to resemble an arboretum. In temperatures that reached 100 degrees, the fresh asphalt on Main Street, USA melted into a sticky tar that ensnared the high heels of some women while a paucity of drinking fountains due to a plumbers’ strike led to frustrations, rather than water, bubbling over. Plenty of water, however, could be found washing over the deck of the Mark Twain riverboat, which was filled beyond capacity and listing from side to side.

Even worse, Disneyland was overloaded with party crashers. The theme park expected a crowd of 15,000 people at the invitation-only opening, however, 28,154 passed through Disneyland’s gates thanks to counterfeit tickets. A few more even scaled a fence using a ladder erected by a makeshift entrepreneur who charged $5 a head.

Even by southern California standards, the seven-mile backup to Disneyland on the Santa Ana Freeway was epic. Passengers baked in their cars, and kids were forced to take bathroom breaks on the side of the freeway and even in the Disneyland parking lot. Unprepared for the throng, Disneyland’s refreshment stands and three restaurants ran out of food, and sweating parents and thirsty kids abandoned many of the long lines. 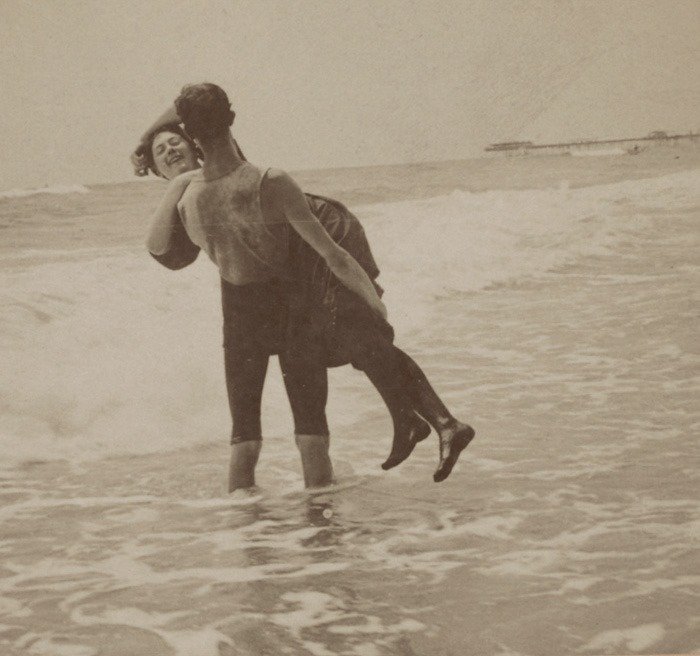 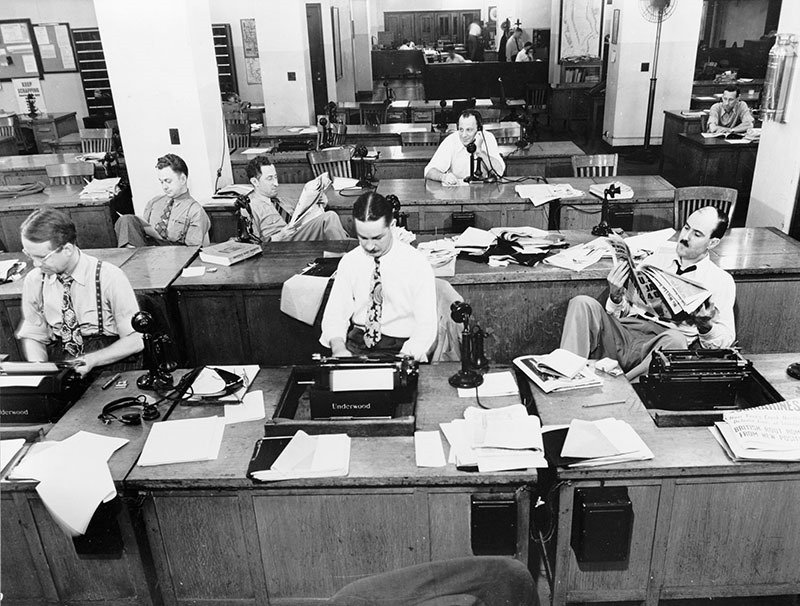 In the old days, newspapers had field reporters who would gather and literally report the news and interview quotes by telephone to the “re-write” desk in the newsroom. Imagine an event happening — for example, a baseball game or a major court case. The field reporters would be gathering information and quotes, then running to the nearest payphone like this to call it into the newsroom.

The newsroom writers would take down that information and write parts of the story while the field reporters returned to the action to gather more details. A sports reporter might gather one inning’s details at a time, while a news reporter might just grab a few main quotes and details to get the story started before going back to gather more. For some stories, two or more field reporters might be gathering information from different places — say, one reporter at the White House and another at the Pentagon — and the newsroom writers would combine that information for one story.

In those days, a lot of papers had afternoon and evening editions. You had to act quickly and there was no way to write and file a story from the field by deadline. All they had were notepads and pockets full of coins for the payphone. So for the writers in the newsroom, like in this picture, that meant hanging out by the telephone waiting for events to unfold and be reported back to them. 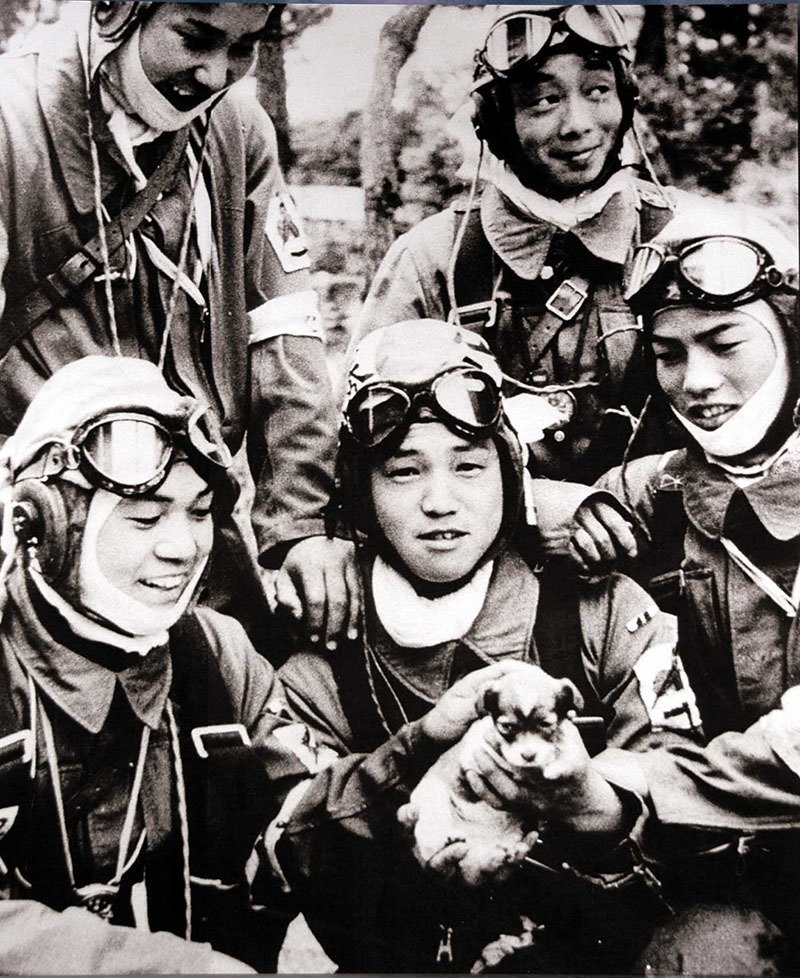 Kamikaze pilots posing with a puppy the day before their suicide missions, 1945.

Yukio Araki became the youngest kamikaze pilot during the Second World War when, at the age of seventeen, he took off from the Bansei Airfield, Kagoshima in a Tachikawa Ki-54 twin-engine training aircraft on 27 May 1945. It has been speculated that his plane was one of two that struck the destroyer USS Braine (DD-630), killing 66 of its crew; however, the ship did not sink. Araki had been home in April 1945, and left letters for his family, to be opened upon the news of his death. The letter to his parents noted: “Please find pleasure in your desire for my loyalty to the Emperor and devotion to parents. I have no regrets. I just go forward on my path”.

Ceremonies were carried out before kamikaze pilots departed on their final mission. The Kamikaze shared ceremonial cups of sake or water known as “mizu no sakazuki”. Many Army officer Kamikaze took their swords with them, while the Navy pilots (as a general rule) did not carry swords in their planes. The kamikaze, like all Japanese aviators flying over unfriendly territory, were issued (or purchased, if they were officers) a Nambu pistol with which to end their lives if they risked being captured. Like all Army and Navy servicemen, the Kamikaze would wear their senninbari, a “belt of a thousand stitches” given to them by their mothers. They also composed and read a death poem, a tradition stemming from the samurai, who did it before committing seppuku. Pilots carried prayers from their families and were given military decorations. The Kamikaze were escorted by other pilots whose function was to protect the Kamikaze to their destination and report on the results.

According to a U.S Air Force, approximately 2,800 Kamikaze attackers sank 34 Navy ships, damaged 368 others, killed 4,900 sailors, and wounded over 4,800. Despite radar detection and cuing, airborne interception, attrition, and massive anti-aircraft barrages, 14 percent of Kamikazes survived to score a hit on a ship; nearly 8.5 percent of all ships hit by Kamikazes sank. 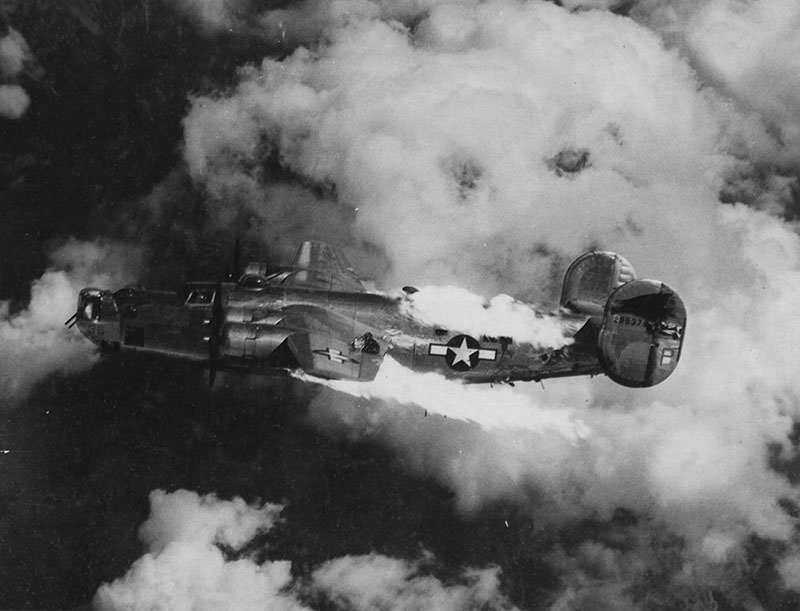 B-24 Liberator in flames after being attacked over Austria, 1944.

These are the last moments of a Consolidated B-24 Liberator bomber of USAF. It was part of a squadron engaged in a raid on an industrial target in Austria. German fighters came up in force, downing all the bombers except the one from which this photograph was made. The aircraft, named “Extra Joker”, was attacked by at least two German fighters Focke-Wulf Fw 190 while flying over the Austrian city of Turnic. Within a few seconds flames enveloped the plane and it exploded. All 10 crew members were killed.

The photograph was taken by Sergeant Leo Stautsenberger who was the cameraman of the Extra Joker. Luckily for him, on that fateful day they asked him to fly on another plane to take photos of the Joker in flight. Thanks to this coincidence Leo lived and made a series of shots of the loss of the aircraft. He said about this picture: “I felt guilty, helplessly snapping a picture while the men were burning inside. It happened so fast they didn’t had much of a chance. I had photographed a picture of death, with the crew burning inside”. 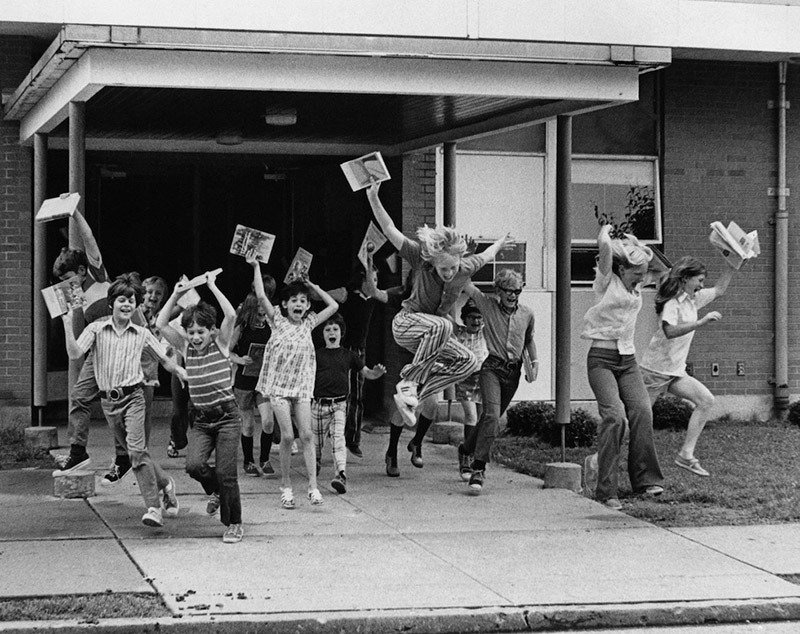 School’s out for summer in Belleville, Illinois, in 1974. 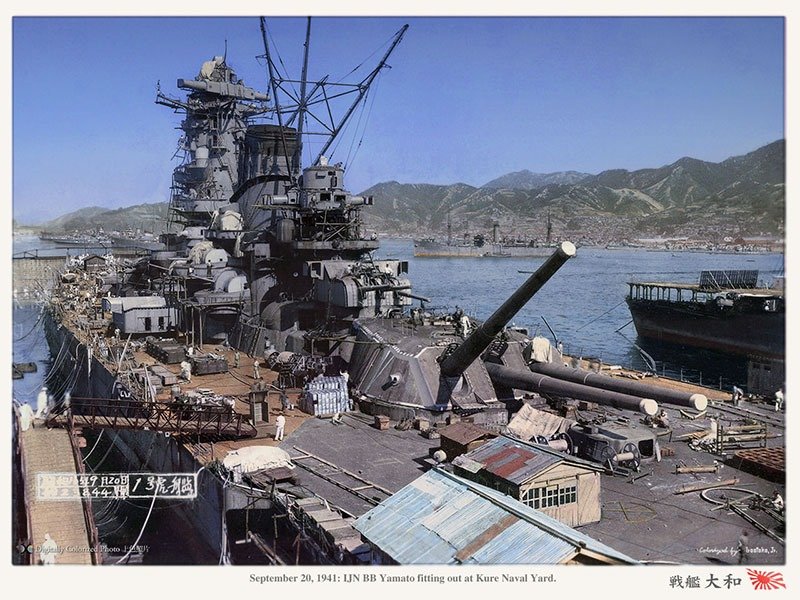 She and her sister ship, Musashi, were the heaviest battleships ever constructed, displacing 72,800 tones at full load and armed with nine 46 cm (18.1 inch) 45 Caliber Type 94 main guns, which were the largest guns ever mounted on a warship. Neither ship survived the war.

The only time Yamato fired her main guns at enemy surface targets was in October 1944, when she was sent to engage American forces invading the Philippines during the Battle of Leyte Gulf. On the verge of success, the Japanese force turned back, believing they were engaging an entire US carrier fleet rather than the light escort carrier group that was all that stood between the battleship and the vulnerable troop transports.

During 1944, the balance of naval power in the Pacific decisively turned against Japan, and by early 1945, its fleet was much depleted and badly hobbled by critical fuel shortages in the home islands. In a desperate attempt to slow the Allied advance, Yamato was dispatched on a one-way mission to Okinawa in April 1945, with orders to beach herself and fight until destroyed protecting the island. The task force was spotted south of Kyushu by US submarines and aircraft, and on 7 April 1945 she was sunk by American carrier-based bombers and torpedo bombers with the loss of most of her crew.